A story of survival 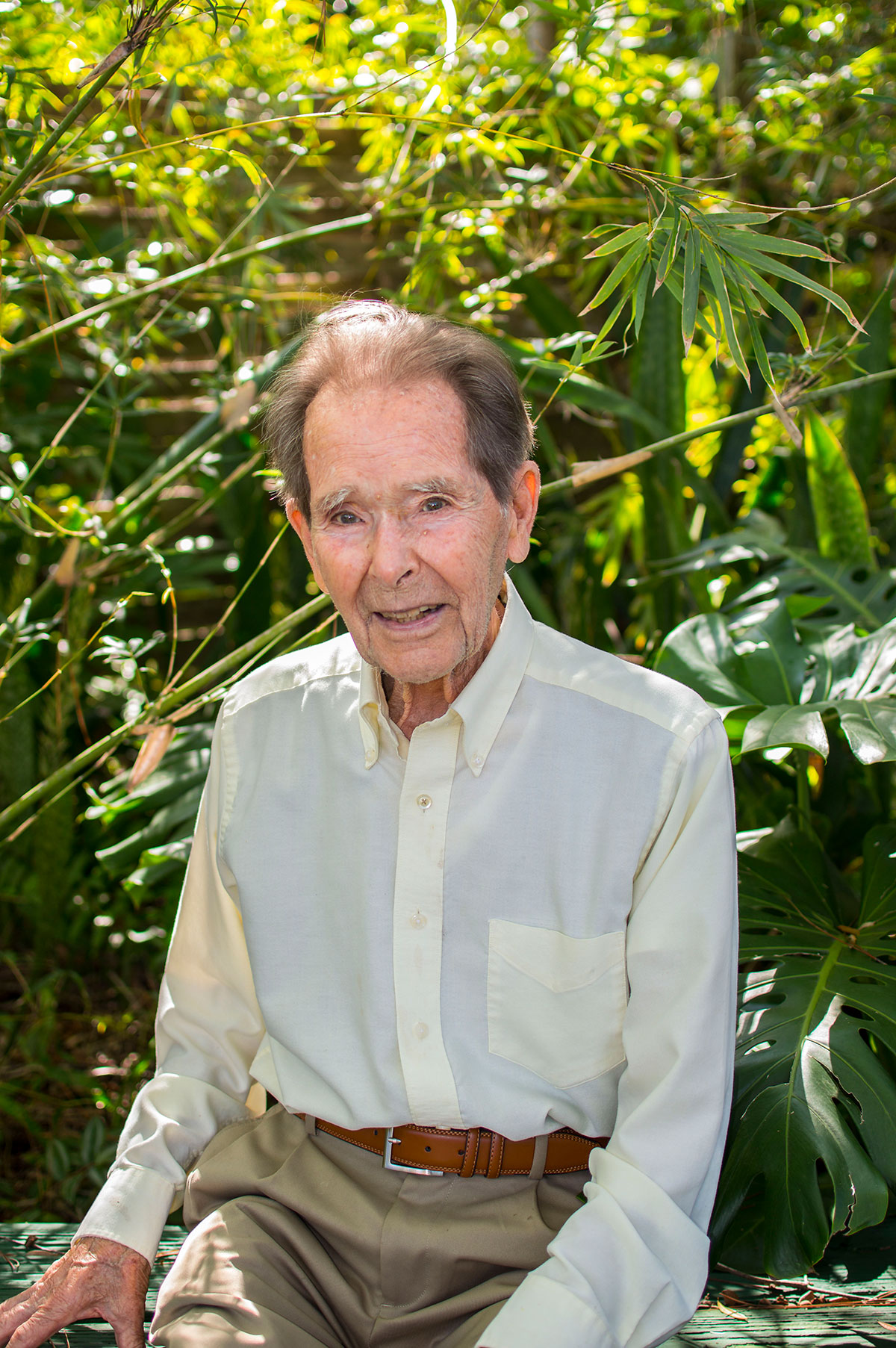 John Brolmann spent 31 years of his life working as a botanist for the University of Florida research center in Fort Pierce. His yard reflects his love of plants and his ability to nurture them. ANTHONY INSWASTY PHOTO

Although he might be small in stature, Johannes (John) Brolmann stood tall during the Nazi occupation of the Netherlands during World War II in Europe. A student at Wageningen University when the occupation began, Brolmann continued his studies for a year or more before a loyalty oath reared its ugly head. University students were asked to sign a Declaration of Loyalty to the Third Reich. Those who signed, remained in school. Those who refused, were sent to forced labor camps in Germany.

“We didn’t want to sign it,” Brolmann says. “If you refused, you had to move to Germany. I refused. There is no way I could sign it. I had to go and my brothers and sisters brought me to the railroad station in May 1943.”

Thus began two years of hardship. Quick to point out that his life was not nearly as bad as those who were sent to concentration camps, he says there were many low points, which he wrote about in a tiny, pocket notebook that still exists. The writing is very small and cramped, getting ever smaller as days went by in an effort to make the small book last.

Brolmann was first shipped to Braunschweig where workers made parts for airplane motors.

“We could not get away,” the Fort Pierce resident says. “If you tried to get away – and some did – you were in big trouble. Our camp was always close to the factory where we worked. There was not too much food and the factory was very cold. We worked 12-hour shifts with no breaks and no food during work.”

DEADLY SITUATION
According to Brolmann, some of his co-workers died in factory accidents. One fellow, he says, drank some of the machine fluid and died. The Germans shot a lot of the workers who tried to go back home and were caught.

After working in Braunschweig from May 14 until Aug. 1, 1943, Brolmann and the others were sent to Uslar where they assembled ammunition boxes.

“We sabotaged a lot,” he says. “Then we had to remake them. Everybody slept together in a barracks at the forced labor camps, with three layers of bunk beds. There were a lot of Catholics and they would let us go to Mass in the town and sometimes we would gather to say the rosary. We would pray that we would be able to return home soon.”

He and the others were next sent to the town of Herzberg am Harz, where they worked in a bomb-making factory. This was the worst of his internments, Brolmann says. They were there from November 1943 until May 1945 and there was an ever-present danger of chemicals at this plant.

“There were a lot of poisons and the air was hard to breathe in some places,” Brolmann remembers. “Your lips and hair would turn blue.”

At one point, the workers had to put a new roof on the factory. It was a gravel roof and they had to carry buckets of hot tar weighing about 80 pounds up tall ladders, three stories up.

“I don’t know how I survived that,” Brolmann says. “I was always small and that work was very hard. Sometimes if someone wavered on the ladder, hot tar would spill on the workers below him, burning them.”

Despite the hardships, the workers were allowed to attend church in the town and to browse through the shops.

“We were very hungry,” he says, “but we did not want to steal from the merchants. It was not their fault that we were there and we didn’t want to take anything from them.”

FACTORY BOMBED
Eventually, the Allies discovered the factory and bombed it one night while Brolmann was asleep in the barracks. There was a terrific explosion. Their barracks collapsed, forcing survivors to crawl out of the wreckage. Some men ran into the woods, trying to escape, he says, but the blast had set the trees on fire and they were burned to death. Much of the village was destroyed.

“They made us go in and clean up the mess,” Brolmann says, adding that it was difficult because there were many victims and so many had not survived amid the wreckage.”

Shortly after the bombing, the war in Europe ended and the workers were permitted to go home. Brolmann was 24 when he saw his homeland again. He considers himself lucky, he says, as so many did not live to return to their families.

“We spent three days being driven in open wagons,” Brolmann says. “We could not sleep at all as we were shipped like cattle. I remember being so tired when we crossed the border into Holland. They stopped at a farm and we had to clean up with DDT before we ate. There were fleas, ticks and lice all over the place and all over us.”

The farmer’s wife fixed the young men some food and “we ate so much fat food we turned yellow,” he says. “We got so sick as we hadn’t eaten (that rich food) in so long.”

Although Brolmann had lost a lot of weight, he remembers when his older brother, Josef, who had been arrested and jailed in Holland for being a member of the Dutch resistance, was released from prison. “He must have weighed about 80 pounds,” Brolmann says. “He looked like a concentration camp survivor.”

RETURNED TO STUDIES
After the war, Brolmann returned to his family home in Hilversum and to the university to continue his studies in botany, receiving advanced degrees in plant breeding, advanced botany and plant structure.

He met and married his wife, Antoinette “Nettie,” in 1952 in St. Vitus Church, where he had been baptized. With his doctoral degree completed, Brolmann went to work on plant breeding in the wheat fields of Arles, France, where three of his sons were born.

Eventually, his brother-in-law sponsored the family and they moved to the United States. Discovering that he would need to redo his degrees in English, Brolmann settled with his family in Gainesville, Fla., where he found work in the Agronomy Department at the University of Florida. He worked for the university while earning his doctorate in botany in 1968 and adding a fourth son to the family.

In 1969, he moved his family to Fort Pierce, where a plant breeder was needed at a UF research center.

“They (UF) had a small lab in Fort Pierce,” Brolmann says, “and they couldn’t get anyone to agree to come there. They flew me down in a small plane, first to Belle Glade and then to Fort Pierce. Flying over the town, it looked really small and was such a rural area. But, I agreed to take the job and moved my family here.”

HONORED BY UF
Brolmann spent many years at the Indian River Field Laboratory for the University of Florida, traveling the world presenting his research on plants, and discovering new plants and ways to propagate them. While Brolmann focused on native plants, he also looked to plants from other countries as well.

“We studied tropical legumes and I brought some plants back from Australia,” he says. “We hoped they would survive in our pastures (to provide nutritious food for local cattle).”

Faculty and staff center presented Brolmann with a plaque for his development of savanna stylo, which has led to improvement of pastures. It was a new, high-yielding forage and hay legume for Florida.

“Breeding (of plants) takes about 20 years,” Brolmann says, “before you really find something. You have to test it against other things like resistance to disease and food value.”
The plant he developed was seeded on Adams Ranch in St. Lucie County and other places to see if the cattle would like it, he adds.

Retiring at 73, Brolmann continued to work part time for UF, spending 31 years as a university employee. Now, the 97-year-old spends his days working on his backyard garden with his youngest son, Jan-Paul, a retired firefighter who visits his father daily. He also picks fresh flowers for a small shrine he created in memory of his beloved wife, Nettie, who died in 2017.

And sometimes when he reflects on his life, he may recall a time when he stood tall against all odds and survived to tell about it.