All rooms with a view 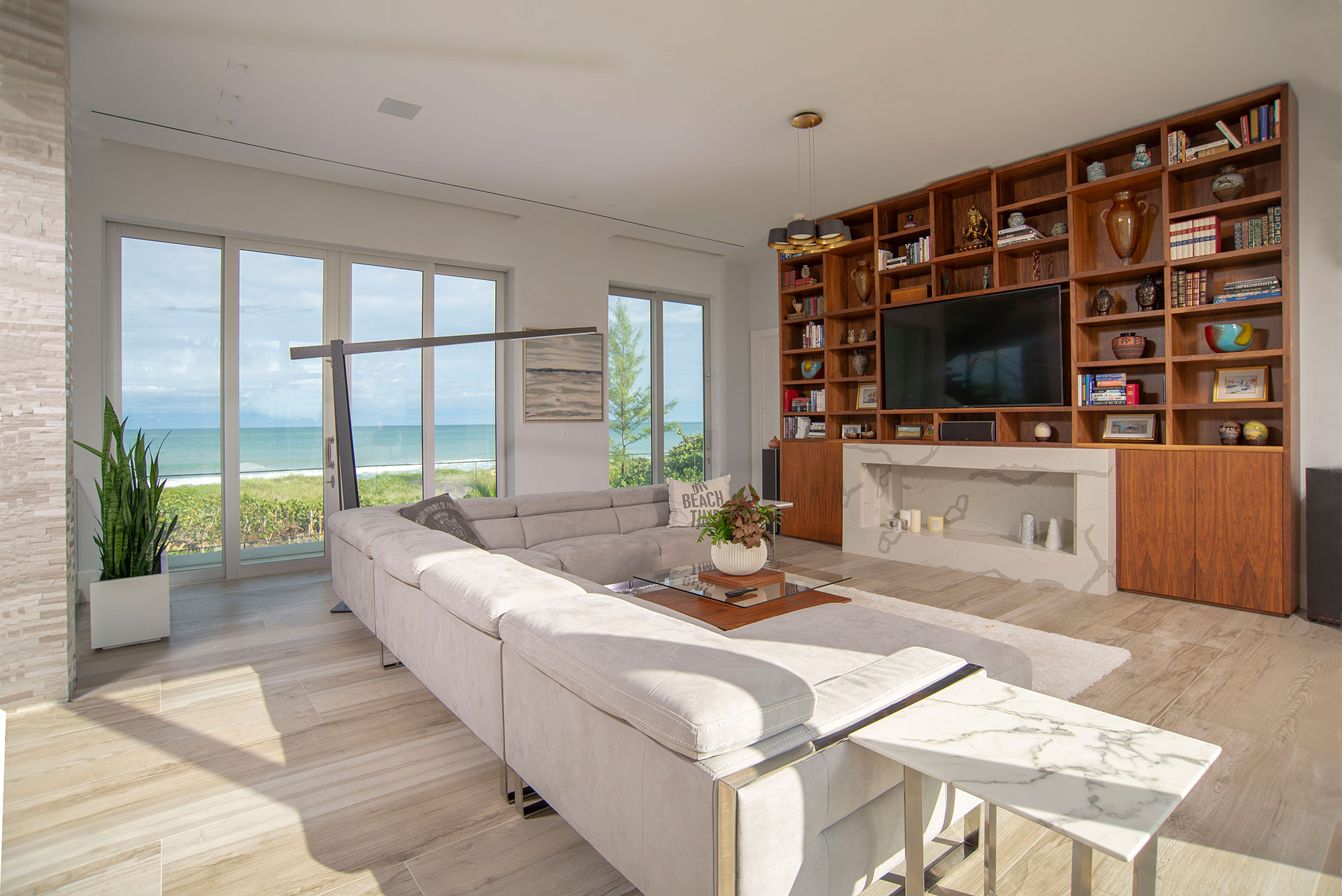 Minimal contemporary furniture leaves plenty of space to get a feel of the vast Atlantic Ocean visible from almost every window in the home known as Ocean View on North Hutchinson Island.

Nature provides the character for this fortress along the sea

Eduardo Leal and Agnieszka Szymanska built their dream home on North Hutchinson Island to stand the tests of time.

“He (the contractor) told us, ‘You are building a bunker here. If there is a hurricane, you can sit back and watch it,’” says Szymanska, a former ballerina with the Polish National Ballet Company and Vero Beach Realtor.

Married for 10 years, the couple met in Coral Gables, where Szymanska had been hired to dance for the Miami City Ballet. Leal has had real estate and cattle interests in St. Lucie County for the past 15 years.

The three-story contemporary home was built on 56 pilings and has floors with steel and poured concrete instead of wood joists more commonly used.
“The bones in this house are a lot more substantial than you would find on houses not on the ocean,” says contractor Tony Della Porta. “The steel and reinforced concrete Hambro system on the elevated floors is usually found in commercial buildings.”

Twelve-foot impact, three-paned, thermally broken glass windows are so energy efficient you can stand next to them with the sun beating down and not feel any heat.

OUTSIDE AND INSIDE
“You feel like you are outside when you are inside, and the balconies are amazing,” says Leal. “Less is more, and we wanted to take advantage of the views. We envisioned bringing the outdoors inside with less walls, more open space to break down barriers. We didn’t want too much furniture. We wanted to let nature be the character of the house. There is so much light here throughout the day. We are mixing nature with contemporary design.”

Plans originally called for aluminum railings on the balconies, but when the couple saw the glass railings on the inside staircase, they knew they wanted the same look outside. All three floors have a faucet and hose for rinsing salt spray from railings and windows. It cost four times as much and there is more maintenance, but they love the open look of the glass, Leal says.

“This is paradise,” says Szymanska, who kept her maiden name, which is common in Europe. “This location has endless private views. You can walk for miles with no one on the beach.” Accretion, the opposite of erosion, is actually happening in front of their 100-foot oceanfront lot, she says.

The couple has had plenty of nature encounters in the year since they moved into the home. They have seen turtles nesting, hatchlings heading out to sea, huge tarpon jumping during a mullet run and a gaggle of pelicans flying just a few feet away as they passed the master bedroom balcony. A raft used by Cuban migrants washed up in front of their home, complete with orange spray paint, which tells law enforcement the occupants have been rescued and are not lost at sea. Seeing the rickety raft with empty water bottles and canned goods was an emotional moment for Leal, who came to Miami from Cuba in 1967.

With two sons in elementary school, Ocean View is a tri-lingual house. The boys speak Polish and English, and they are learning Spanish. “They correct my English,” says Szymanska, who speaks perfect English with a slight Polish accent after 16 years in the U.S.

COOKING ENJOYMENT
“I cook a lot, and it is a working kitchen,” she says. “We like to eat at home. We enjoy the space and the quality of the kitchen.”

When they could not find the kitchen they were looking for locally or in Miami, they went to Poland, where they also have a home in Warsaw. Like a box of Legos, the Revve Innovation kitchen arrived in a large shipping container. It took four days for two Polish technicians to install the counters and cabinets. The different components were manufactured in Switzerland, Austria, Germany and Poland.

All the high-end appliances are Miele, made in Germany. Using low voltage motors, the smooth-action drawers and cabinets have LED lights that come on when opened. There are two dishwashers, one for prep clean-up and the other for the dishes after the meal.

“They took it to the ultimate for a kitchen with all the top appliances,” says Staffan Lundberg, the project’s Vero Beach architect originally from Sweden. “It is a fantastic kitchen for cooking and entertaining. The kitchen is part of the entertainment of the family room.”

Propane powers the kitchen, fireplaces and hot water heater. The elevator was deliberately built larger to comply with the Americans with Disabilities Act of 1990. It gets plenty of use for bringing groceries up to the second floor. Gas also heats the 14-by-36-foot salt water pool.

PERSONAL TASTES
There are seven music zones in the home and each can be programmed separately. Leal likes 70s music while Szymanska listens to tunes from the 90s. Lighting and climate control can also be adjusted throughout the house or remotely controlled by smart phone. Because of intense use of high efficiency materials and windows, only three air conditioning zones were needed instead of the five originally planned.

Flooring on all three floors is large two-by-six Italian tiles that look and feel like hardwood. Each tile weighs 45 pounds. There are no hallways anywhere in the house.

“We both like designing and decorating to our personal tastes, and we bring elements from places we have traveled to,” says Szymanska. “But the nice kitchens come from Europe. We chose all of the colors and materials. We had a vision, but they (contractors) gave us the quality. We designed the way it was finished, the tiles, the details. We were driving around looking for furnishings. It was done to our taste.”

Once listed at $4.5 million, Ocean View is currently not for sale. “It is too beautiful a house to sell, so we took it off the market. But if you bring me the right offer, we’ll talk,” says Leal. 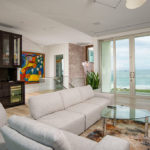 The massive impact doors in the master suite sitting room slide back for enjoyment of ocean breezes. The outside glass railings are almost invisible from the inside. 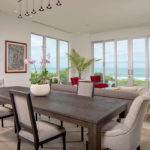 With seating for eight, the dining room table is just a few steps from the kitchen. 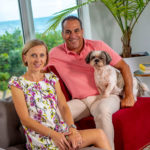 Milo stands guard at the beautiful oceanfront home built by his owners, Eduardo Leal and his wife, Agnieszka Szymanska. 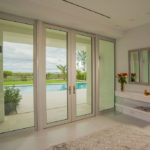 The open foyer on the first floor has wide views of the pool and ocean upon entering the front door. 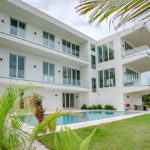 Specifically designed drains behind the balconies were built to contain and drain runoff from the rinsing of windows and glass railings in order to avoid leaving rust stains on the paint. 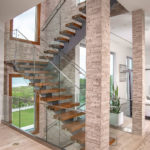 The stunning staircase is a stylish mix of steel, glass, stone and hardwood treads. 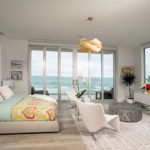 The most spectacular room in the house is the master bedroom with balconies and windows on three sides. 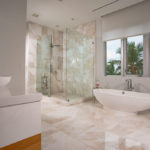 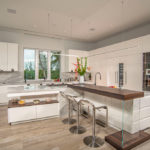 This state of the art European kitchen has an open feel without a stove hood, which rises up from the countertop for cooking. 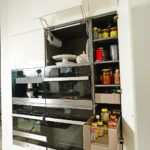 Everything about the design of these drawers and cabinets is dedicated to making cooking easy for the chef. Appliances can easily be set on the counter for cooking and the press of a button opens and closes the higher cabinets. 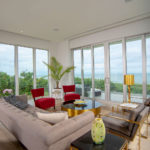 With its low-designed furniture, the family room doesn’t block any of the ocean views from the adjacent kitchen. 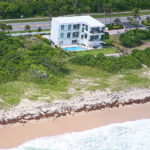 Built for a storm surge to go right underneath the upper floors, this oceanfront paradise sits on a beach that is actually growing instead of eroding. GREG GARDNER PHOTO 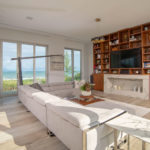 Minimal contemporary furniture leaves plenty of space to get a feel of the vast Atlantic Ocean visible from almost every window in the home known as Ocean View on North Hutchinson Island.
Please follow and like us: