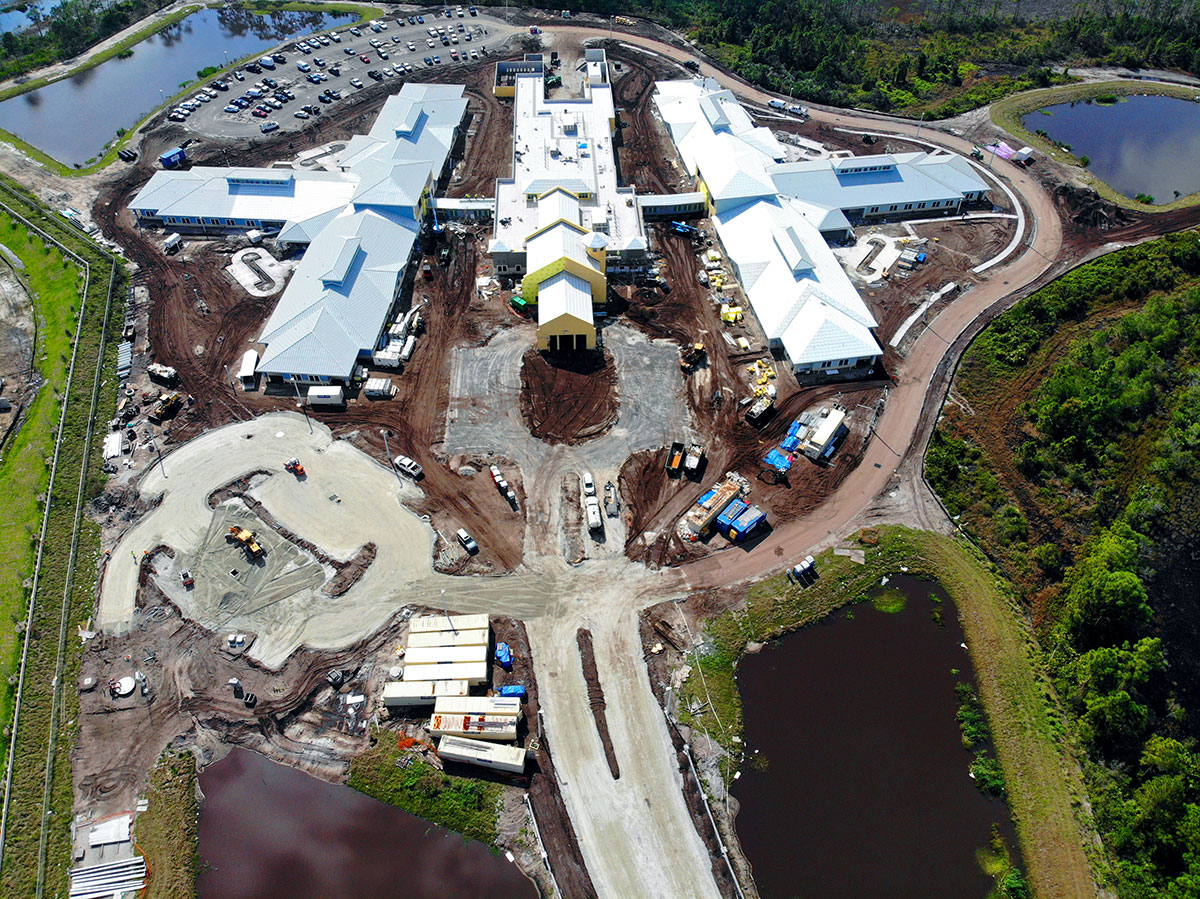 The Ardie R. Copas State Veterans’ Nursing Home is under construction. The middle building houses the dining room, chapel, beauty and barber shop and more. Each of the wings contains three houses, consisting of 20 beds each. FLORIDA DEPARTMENT OF VETERANS AFFAIRS

Despite numerous delays and the pandemic, state veterans home to welcome residents soon

Treasure Coast veterans in need of skilled nursing can soon move into a place not far from home where their families and friends can easily visit. The new Ardie R. Copas State Veterans’ Nursing Home in Tradition will be only the seventh state home for veterans in Florida. Widely dispersed, the nearest now are in Pembroke Pines, 100 miles away, and Daytona Beach at 145 miles.

Ardie Ray Copas died a hero in Cambodia during the Vietnam War at the age of 19, saving the lives of four soldiers from enemy fire. His baby daughter, Shyrell Copas, then 5 months old, never got the chance to be held by her young dad. But she is devoted to him, making sure the flame that is his memory never goes out. And with the opening in Port St. Lucie this summer or fall of a home named after her dad, it never will.

The nursing home’s construction and decor, intended to create a home-like feeling, will allow each veteran to share a bedroom with another veteran, but each will have his or her own living area. It includes six private rooms and six bariatric rooms.

Copas, who would have been named after World War II hero Audie Murphy had there not been a mistake on his birth certificate, grew up and is buried in Fort Pierce. When the state began looking for a site for a state nursing home for veterans in 2014, St. Lucie County jumped at the opportunity, said Wayne Teegardin, the county’s Veteran Services officer.

Months of intensive work led to a 600-page application — and the state wanted 11 copies. It was so massive that Teegardin drove it across the state to the state offices in Largo and used a handcart to take it in. It paid off — in September 2014, the governor and cabinet approved the nursing home to be built on a 28-acre site in Tradition near the Cleveland Clinic Tradition Hospital.

“We had everything they wanted — nearby hospital and doctors, fire station, and more,” Teegardin said. “Plus, the county agreed to pay for certain extras outside the contract.”

Finding a name included meeting certain criteria. One of them was that the person had to be a Medal of Honor recipient. And preference was to be given to someone local. Copas, who received the Medal of Honor posthumously from President Obama on March 18, 2014, met both criteria.

When the name was announced in January 2015, his daughter, Shyrell, was almost beyond words. This would keep her dad’s name alive forever, she thought.

“I am so ecstatic, so happy, so honored that his name was chosen that words can’t explain,” she said at the time.

OPENING PENDING
Sometime this summer, or later due to possible delays caused by COVID-19, the skilled nursing home will open. And Shyrell Copas and her mother, Betsy, plan to be there. “I can’t wait,” she said.

“The 121,000-square-foot skilled-nursing facility will have a total of 120 beds in two ‘neighborhoods,’ (or wings) each consisting of three houses of 20 beds. One neighborhood of 60 beds will be devoted to residents with Alzheimer’s or dementia,” said Steve Murray, the Florida Department of Veterans’ Affairs spokesman.

“Most residences are two-person semi-private rooms, with separate living areas and a shared bathroom,” he said. “Included in the overall design are six bariatric rooms and six private rooms.”

A main building between the two neighborhoods is known as the Heroes Center. It will house the lobby and admissions area, administrative offices, physical therapy, the beauty and barber shop, a chapel, the kitchen, and dining facilities.

MOVING CLOSER TO HOME
An arrangement can be made to transfer vets from other state nursing homes to Port St. Lucie to be closer to family, he said.

Applications aren’t being taken yet, but interested veterans and families can call for updates.

“Families wanting to inquire about the admissions process may contact the Florida Department of Veterans’ Affairs Homes Program Office at 727.518.3202, ext. 5562. Basic admission requirements for all state veterans homes include an honorable discharge, Florida residency and certification of need by a VA physician,” Murray explained.

The $62 million home will include 120 beds. The price tag includes construction, furnishings, inspections, insurance and taxes. The federal government is picking up 65 percent of the cost while the state is paying 35 percent, Murray said.

There was a two-year delay between the state’s approval and the start of construction. It had to do with the design, Teegardin said. The home was supposed to be complete in late 2017 or early 2018. Instead, the groundbreaking took place in May 2018.

DESIGN DELAYED PROJECT
The state was coming along nicely with its plan for the home with two large wings and a connecting core between them when the federal Veterans Affairs department required the state switch to its plan — four separate buildings — since it was paying the majority of the cost, Teegardin said.

State pleas to stick with its plan failed, so the designers had to start over. However, the state agency then appealed to President Trump, who told the federal officials to revert the state’s plans.

“So we started over for a third time,” Teegardin said. The cost would be lower, he said, if the buildings were connected.

While waiting for construction to be complete, his office began working on an initiative to house homeless vets without taxpayer funding. So far, homes for eight have been found, he said.

Murray said the state is interviewing prospective administrators for key positions including home administrator. More interviews will come in late spring. The facility will initially employ between 165 and 175 people.

Shyrell Copas said she is hoping to get a job at the nursing home. In the meantime, she has been teaching the Character Development Program designed by the Medal of Honor Society.

“I take my dad’s medal and White House materials when I teach that program and speak about courage, integrity, sacrifice, commitment, honor, patriotism and citizenship,” she said. “These are the characteristics heroes live by every day, whether they even realize it or not.

“If we cared more about each other than we do things, what an even more amazing place this would be because I believe we’re all heroes,” she continued. “The true heroes to me are the ones who keep us safe every day, not someone with a cape and super powers.”

Soon, perhaps in three or more months depending on how soon the coronavirus dissipates, heroes like her dad will be moving into their new rooms at the Ardie R. Copas State Veterans’ Nursing Home in Port St. Lucie.