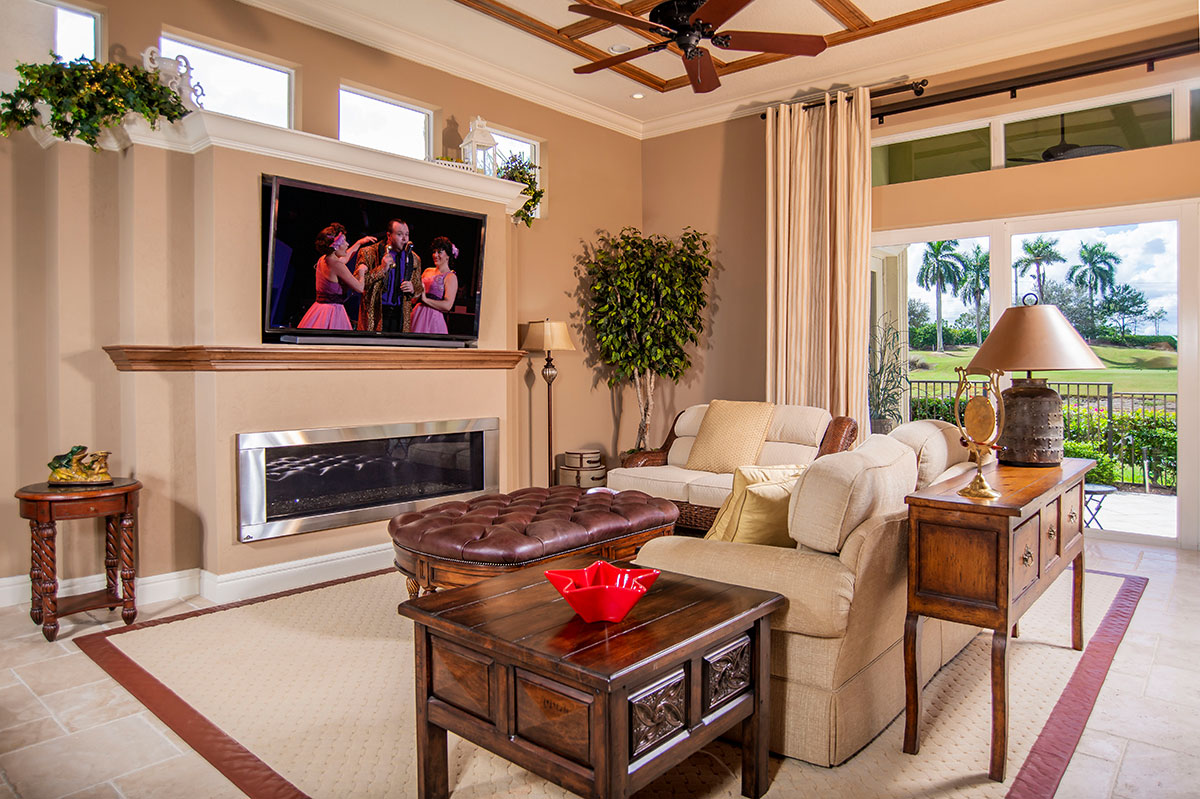 Michael and Sue Stutzke loved their Tesoro home, but they added this entertainment wall, including fireplace, to the family room to make it look like it was built into the house. ROB DOWNEY PHOTOS

After a daily commute between Hobe Sound and Sebastian for two years, Michael and Sue Stutzke discovered their dream house in Tesoro.

“It certainly was good for me since it cut my commute to 42 minutes,” says Michael Stutzke, a retired athletic director from Sebastian River High School. His wife, Sue, was running a private health care company, and the new home shortened her drive time from the exclusive Port St. Lucie community to see clients on the Treasure Coast.

“We both had very busy lives, and this home in Tesoro is a nice place to come home to recharge batteries — to both the beauty of this house and Tesoro,” says Sue. “It is such a pretty house. The trim and detail work are exceptional. It is user friendly but not that big. It is a comfortable yet elegant home. We came at a good time, and we were the first family to live in the house. It is such a great house for families. We have a lot of stayovers.”

What attracted the Stutzkes to the 3,617-square-foot home was its previous use as a model and on-site office by the builder. After the 2008 recession, some homes went back to the bank, and they did not want a home that had been dormant, fearing they would have repair and maintenance issues.

IDEAL DESIGN
Built in 2005, the three-bedroom, three-and-a-half bath home’s design offers privacy for guests with two upstairs suites and a kitchen and common area. With two sons, two grandchildren and three great-grandchildren, the Stutzkes have hosted family reunions at the home they call Bella Strano after their street.

“We have great memories here,” says Michael. “It is a beautiful, warm home to bring family together for Christmases, Thanksgivings and first birthday cakes. The kids love the pool. I am not a golfer, but I love the serenity of the golf course and the serenity of the (three) waterfalls.”

Designed by a California architect, the pool opens out to a lake and the fourth hole of the Tesoro golf course designed by the late Arnold Palmer. The pool and spa have several seats and benches where swimmers can pull up for a rest. The Stutzkes refinished the pool and added an outdoor fireplace. “You can enjoy it from inside, outside or from (the balcony) above,” says Sue.

Natural gas powers the two fireplaces, hot water and pool heaters, heat for the house, the summer kitchen grill and the five-burner range in the main kitchen.

RESTORATION EFFORTS
High transom windows throughout the house give it an open feel, and every room has a different ceiling design. The couple did add a custom entertainment wall in the family room but little else to the rest of the interior. The exterior has a different appearance with “quite a lot of landscaping and a considerable investment,” Michael says.

He is on his fifth career. A Vero Beach High School graduate, he was a Marine, worked for Proctor and Gamble, ran citrus interests, and taught and coached middle school students before becoming athletic director at Sebastian River High School from the year it opened in 1994 to 2016. One of the four founding members of the Treasure Coast Sports Commission, Stutzke also served as its chairman.

“I hate to say it, but I am going to be a snowbird,” he says. The couple also owns and works a 200-acre corn and soybean farm in Princeton, Ill., where they are active in efforts to preserve and restore old buildings.

“When you are retired, you look at downsizing,” says Michael. “We are building a new home on the farm, a one-story, so it is easy to get around. We’re spending six months in Florida and six months up north. We plant in the spring and harvest in the fall. We enjoy the change in seasons. We hate to leave it vacant for six months. As we grow older, we won’t need two large homes. If we sell it, fine. If not, we’ll stay.”

Bella Strano is listed by Joey Cueto of Team Naplitano at Keller Williams in Port St. Lucie for $695,000.