An ounce of prevention 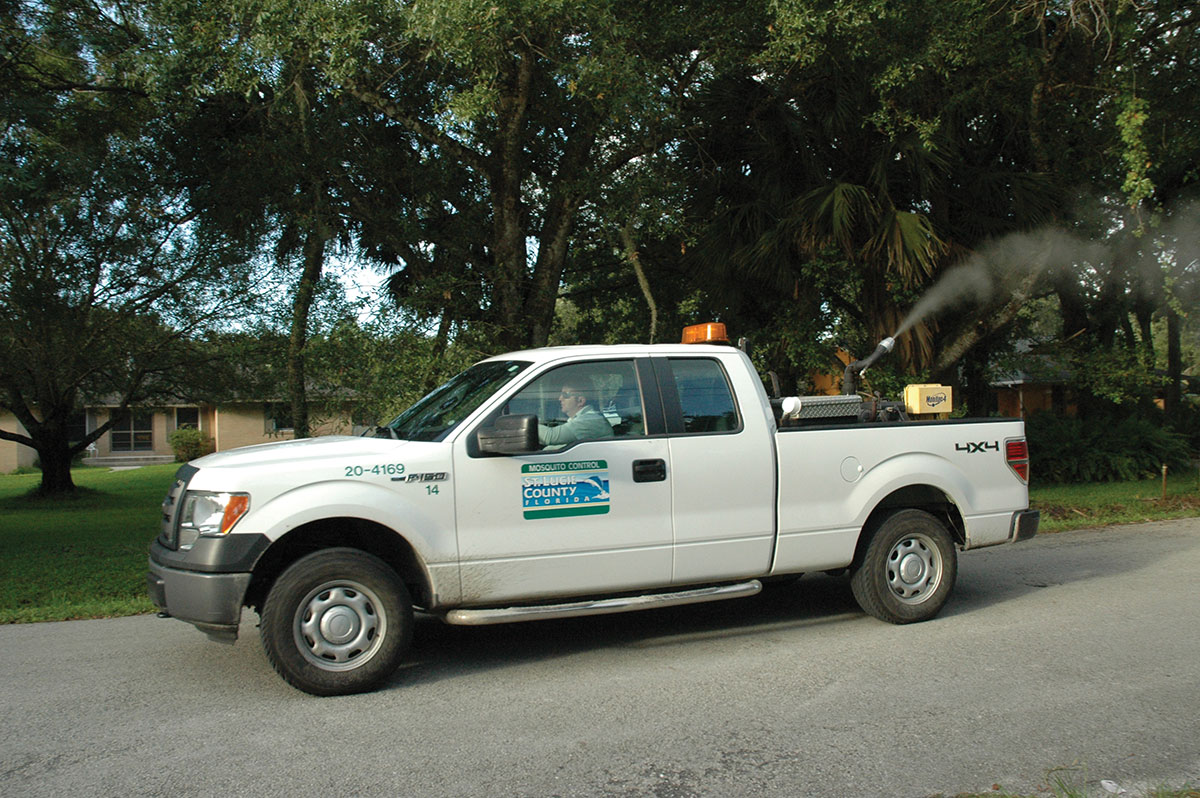 Protecting people from the Zika virus includes spraying pesticides to help reduce the risk of infection. There has been no local transmission of the mosquito-borne virus on the Treasure Coast, but it has been transmitted in areas of Miami Beach. ST. LUCIE COUNTY MOSQUITO CONTROL PHOTO

You’ve probably heard about the Zika virus affecting Florida. The good news is that most infected people can simply wait for the illness to take its course. The bad news, however, for pregnant women is that Zika can cause devastating birth defects.

Those women who are pregnant or planning to become pregnant are given guidelines from the Centers for Disease Control and Prevention, such as different insect repellents to use to protect them from mosquito bites. The guidelines are also posted throughout the WHS rooms.

“Eighty percent of people are asymptomatic,” McCurdy points out. “They have no symptoms. It takes the few people who do have symptoms to find out (if the infection is present and a threat to local areas).”

Zika is caused by a mosquito-borne virus, which is normally considered a mild illness. However, the virus, similar to the dengue and West Nile virus infection, poses a hazard to pregnant women. If the infection occurs during pregnancy, it could lead to severe birth defects of the brain. Fetuses and infants infected by Zika during pregnancy could also suffer from vision and hearing defects as well as impaired growth.

Zika outbreaks have occurred in Central and South America, Mexico, the Caribbean, Africa and Southeast Asia, so cases identified in the U.S. are usually travel-related. However, confirmed local transmission of the virus has been found in small areas of Miami-Dade County with a case reported in Palm Beach County thought to stem from the Miami area.

As of September, the Florida Department of Health reported two cases in Martin County and five cases in St. Lucie County, but these were all travel-related.

Pregnant women are told to avoid traveling to the areas where local transmission of the virus has occurred. It is also important for the male partners of pregnant women or those who want to become pregnant to take precautions as well, McCurdy explains.

“Males may have traveled outside the country or in Miami Beach for business,” she says. “At that point, abstinence is necessary for six months upon their return or some form of contraception by the couples if the man or woman has traveled to these areas,” the doctor explains, according to advice from the World Health Organization.

“For some people, this doesn’t fit into their family planning,” McCurdy says. For example, they may have had plans to honeymoon in the Bahamas, but they are told not to go as a precaution to avoid possible exposure.

Problems with delays in test results have occurred in Florida, but federal and state health officials have come up with more funding to purchase supplies and hire more lab workers.

“This is the first thing of this magnitude to be a real true threat to pregnant women in the U.S.,” McCurdy says.

There is no vaccine for the virus, so the best way to deal with it is through prevention, such as protecting yourself and family members from mosquito bites, according to the state health department. Wearing protective clothing and using insect repellent helps prevent the risk of mosquito bites.

People with Zika could also transmit it through sex, so abstinence or safe contraceptive measures are required.

Signs of Zika include fever, joint pain, muscle pain, headache, rash, and conjunctivitis. The symptoms usually last for several days to a week and infected people are most likely protected from infections in the future. Doctors recommend treatment similar to the cold and flu, such as getting plenty of rest, drinking fluids, and taking fever or pain-relieving medication.

Women with Zika symptoms need to wait at least eight weeks to six months after the symptoms begin before trying to get pregnant while men should wait at least six months. Health officials have been reassessing their guidelines as they learn more about the virus. Pregnant women need to be assessed for exposure to the virus or for symptoms during their prenatal care.

“The risk (of infection) is extremely low at this time,” but pregnant women need to remain very concerned because of the threat of birth defects, notes Dr. Moti Ramgopal, an infectious disease specialist affiliated with Lawnwood Regional Medical Center and Martin Medical Center.

“A lot of pregnant women are afraid of it,” Ramgopal says. Women who are pregnant or plan to get pregnant should discuss potential exposure to the virus with their obstetrician, he points out. They should stay well covered during the mosquito season and avoid traveling to the countries where the virus has been identified.

“There is no medication we can use to kill the virus,” Ramgopal says. “Your own
immune system takes care of it.” He hopes a vaccine will be developed in a year or two. In the meantime, prevention and allowing your immune system to take care of it are the best approaches.

The local and state Department of Health offices work closely with health-care providers on the latest guidelines and information on the Zika virus for patients, according to Sarah Revell, media and marketing manager for the state health agency.

“If a health-care provider suspects Zika in a patient, the health-care provider alerts the local county health department so that appropriate testing and follow-up activities occur,” Revell advises in an email. Aside from treating the patient, activities may include coordinating with mosquito control agencies to increase spraying of areas where cases may have occurred or to prevent the risk of the virus.