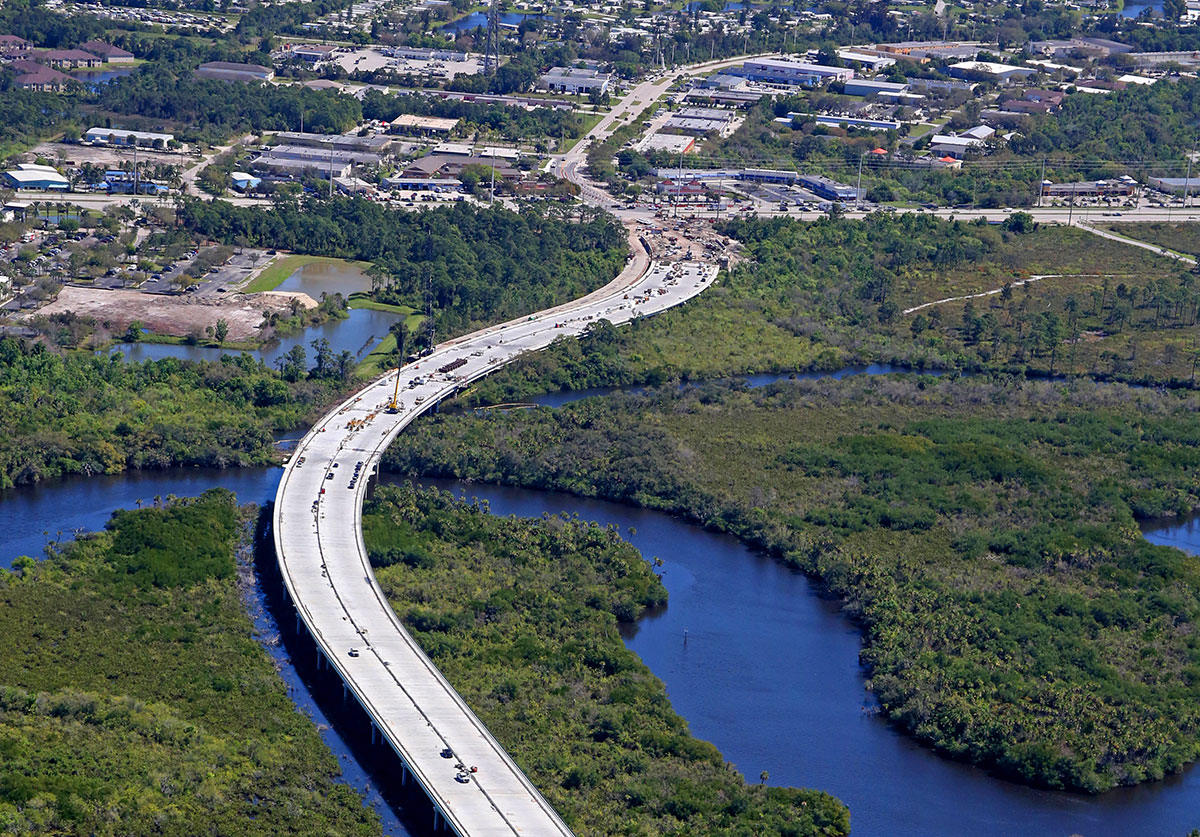 Parkway extension among the best public works projects in the state

Crosstown Awards: The Crosstown Parkway extension and associated bridge are among the best public works projects in Florida and the southeast United States, according to two important engineering associations.

The Florida Transportation Builders’ Association awarded the project Best in Construction for a Local Agency Program. Port St. Lucie managed the project through an agreement with the Florida Department of Transportation. In addition, the Engineering News Record Southeast said Crosstown was the Best Highway Bridge Project, which puts it in the running for the Engineering News Record’s Best of the Best award. The project also won two public relations honors.

Budget Excellence: For excellence in providing objective measures of progress toward accomplishing the mission, goals and objectives of citywide departments and elected officials and organization, Port St. Lucie is one of only 20 municipalities out of 1,123 awarded the Government Finance Officers Association’s Distinguished Budget Presentation Award to also receive special recognition for presenting outstanding measures of performance.

Safest Place to Live: Money Inc. says Port St. Lucie is the fourth safest place to live in the United States. When the listing was created in August it stated: “There are 112 violent crimes and 958 property crimes per one hundred thousand residents.” The other two Florida cities named were Cape Coral, No. 16, and Coral Springs at No. 20.

Florida League of Cities president: For the first time in the city’s history a council member is in line to become the league’s president. Councilwoman Jolien Caraballo will become president in two years. She was named second vice president for 2020-21. The league, in existence for 98 years, focuses on the impact local citizens and leaders can have on improving their communities.

25th Best Place to Retire: The financial site Wallet Hub surveyed 180 communities and decided that Port St. Lucie is the 25th best place to retire in the United States. The city is affordable and friendly, offers access to good healthcare and is considered a safe place to live. The county offers a property tax exemption for seniors, too.

Adopt-a-Street Volunteer honored: For leadership and dedication to community, resident Danielle Hightower was honored with the Outstanding Youth Champion award by Keep Florida Beautiful, the parent organization of Keep Port St. Lucie Beautiful. Now 18, she began picking up litter as part of Keep Port St. Lucie Beautiful Adopt-a-Street program when she was 14. As time went on she created a group of students who worked with her. Today’s young people are the next generation of environmental champions, Hightower says.

Opioid Epidemic Awareness Forum Nets Award: The 2020 Innovation in Health Award from the Florida Parks and Recreation Association went to Port St. Lucie. The Opioid Epidemic Awareness Forum presented the history of opioids and explained how to tell if a friend or family member was showing signs of addiction. It included suggestions on what to do and possible treatments. The award honors successful programs on various topics that advance knowledge.

A Fast Growing City Still Affordable for Home Buyers: A financial site called LendEDU ranked 1,000 fast-growing cities across the nation according to their affordability for home buyers planning for a mortgage. The idea is to find a city or a town where mortgages are affordable and the homeowner can make a profit when it is time to sell. Port St. Lucie was ranked at No. 63 out of 118 cities named in Florida.

City Wins Voice of the People Award for its outstanding efforts to engage its residents in planning for the future. The strategic planning process includes the annual National Community Survey, a statistically valid survey of city residents that provides a picture of residents’ perspectives on local government services, policies and management. For example, residents rate quality of life high but said mobility and public transit were high on the list of needed improvements. Such opinions allow the city council to set priorities for projects. The awards came from the National Research Center hosted by Polco, which is headquartered in Wisconsin, and the International City and County Management Association.

Port St. Lucie is a Top Winter Campground Destination: MotorHome Magazine named Motorcoach Resort in St. Lucie West one of the top destinations for RVers. The luxury Class A resort has expanded, adding 67 more lots, a new pool and laundry facilities, expanded its golf course to 18 holes and added internet access to all sites, according to MotorHome Magazine. The clubhouse was remodeled, adding 5,000 square feet and a new gym, the magazine said.

Port St. Lucie is Third Best Place to Retire: U.S. News and World Report says that out of 150 metropolitan areas it ranked, the city comes in third in Florida for how well it meets retirement needs and expectations. The Port St. Lucie Metropolitan Statistical Area includes Martin County. Sarasota came in first, followed by Fort Myers. Port St. Lucie was cited for its more relaxed atmosphere compared to larger cities, its clean streets and quiet neighborhoods. Affordable homes, scenic waterways and lush golf courses round out the accolades.

Seventeenth Best for Remote Workers: With a ranking ideal for the pandemic era, Port St. Lucie is a good choice for anyone working remotely, according to LawnStarter, an online service that connects consumers to lawncare professionals. The company says that as of June, 42 percent of the labor force was working from home. LawnStarter looked at opportunity and earning potential, work environment, connectivity and convenience and costs to make its determination.

A 2020 Best Place to Work: The city, with 1,073 employees, was one of 12 employers in the county to win the award from the St. Lucie County Human Resources Association. Among the reasons given by the association were an average of almost $2,000 per employee spent on training and development; 89% enrolled in the health insurance program; 100% enrolled in a voluntary contribution retirement program; 41 days off after one year of employment and a free health clinic for those who are in the city’s health insurance program. The association hired Personnel Dynamics Consulting of Fort Pierce to calculate turnover rates, growth percentages, employee development spending, promotion percentages, insurance packages and retirement plans.

Sixth Best All-Inclusive Resort in the USA: Club Med Sandpiper, with its crescent-shaped beach of white sand on the North Fork of the St. Lucie River, restaurants and water activities was one of only 12 all-inclusive resorts selected by the SmarterTravel web site. It had high praise for Club Med, stating: “Best described as one of the premier all-inclusive resorts in the United States for families who love to stay active, this resort has a little bit of everything.” The resort offers sailboats, golf, tennis and fitness programs, as well as children’s programs.

Most Livable Mid-Size City: Not all mid-size cities are equal. In a study by SmartAsset, a financial website, Port St. Lucie ranked 25th out of 49 cities considered. The study looked at changes in median home value, median monthly housing costs, poverty rate, median household income and the July 2020 unemployment rate to determine that the city landed right in the middle of the rankings. Rochester, Minnesota, was first; San Mateo, California, was last.