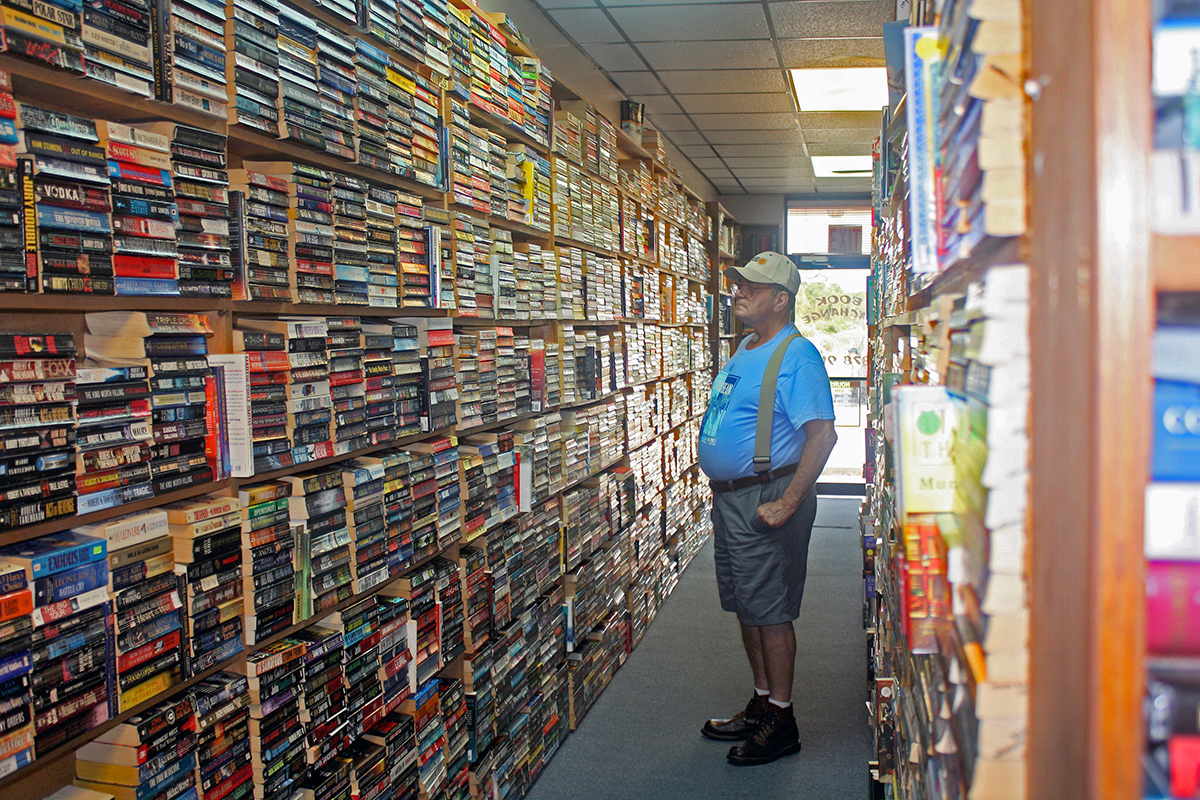 Entrepreneur Osman Rashid predicted, “By 2025, we can expect the world to be completely digital. Paper books will be a thing of the past.” Many book lovers would shout, “Nonsense!” Getting rid of libraries and bookstores would be, to them, as ridiculous and culturally catastrophic as settling for poster prints of masterpieces instead of viewing originals in museums.

Book lovers, or “bibliophiles,” face challenges in Port St. Lucie. While the St. Lucie County library system features four branches in the city, borrowing books doesn’t always meet a book lover’s needs. Other than traveling or ordering online, there haven’t been many options.

One staple has been The Book Exchange, 8719 South U.S. 1, the go-to place for used books for 23 years. Owner Mary Loper always loved reading; when she decided to open a business, books were a natural fit. “I landed here,” she says. “I have regulars who come in every week, snowbirds who come down every season. It’s a labor of love. I love my shop, and my customers are like family.” And as with any family, there are sad moments, too. “Someone recently let me know one of my regulars passed away — it breaks your heart.”
Loper would like to have a larger store, but she’s staying put. Space constraints mean she must be discriminating, even picky, with acquisitions. “Especially with hardbacks — most people are looking for paperbacks.” People donate books or bring books in for store credit. When there is a surplus, Loper gives books to Vietnam veterans’ groups or to the jail.

“We’re fully computerized,” says Loper, “which customers find very helpful. We know what’s here and keep track of what customers have already read.” Occasionally, someone will order a new book to finish a series, but Loper prefers sticking to used books; she will search for particular authors or titles if requested. The store also sells used audiobooks and puzzles.

RETAIL IDEA
On a smaller scale, thrift stores are another source for used books, but while some churches sell books and a few “big-box” stores include limited book sections, the serious local reader who wishes to peruse and purchase new books has had to order online or face heavy traffic. No more.

Poetic Justice opened in July 2018 with limited inventory and display tables, waiting on its grand opening until March 5, the anniversary of getting that all-important tax number. Owner Kris Haggblom’s journey to reach that point would make an interesting book plot itself. “I’ve always said I’d try anything twice, because I might’ve done it wrong the first time, but I wouldn’t recommend that with a stroke.”

In 2000, Haggblom was a media technology teacher at the College of Westchester in White Plains, New York. One day in the school’s parking lot, he thought he’d been shot, the sudden pain in his head was so severe. Diagnosed with an aneurysm, he suffered a stroke during the eight-hour surgery and woke completely blind. Although doctors assured him it was temporary, the blindness — coupled with diminished function from the stroke — made for some low days. Eventually he could detect vague form and movement; one day, his wife handed him a bottle of Arizona iced tea. “I read the label. ‘Oh my God, I can see!’” he says with a smile. “I still have that bottle.”

Haggblom’s right side was affected by the stroke; he could no longer spend long hours at a computer without suffering from debilitating headaches. Teaching was no longer an option. “Stuck in the house, I was going bonkers. I applied for jobs at two stores within walking distance, and Barnes & Noble responded first.”

Stocking shelves initially, he moved up to head cashier, then became the digital lead. After his marriage ended and he reconnected with an old college chum, he moved to Daytona. “Dawn had been the editor of the school newspaper; I was the editor of the magazine. We fired each other our senior year and didn’t speak for 27 years. Now we’ve been married for 10.”

Haggblom was with Barnes & Noble for 18 years in New York and Florida before the corporation laid off 2,500 employees — including him. The idea of opening his own bookstore came about five minutes later. “It’s important to determine interest before you invest time and money into an idea, but everyone I talked to showed interest.” A retail bookstore would fill an obvious need with no competition. “Port St. Lucie is the eighth-largest city in Florida, but businesses must deal with the sprawl. There really should be a more active creative community here — we have an amazing amount of talent here, with artists, writers and musicians.”

POET’S CORNER
Poetic Justice is in Morningside Shops at the corner of Port St. Lucie and Morningside Boulevards, its walls adorned with the work of local artists and, of course, bookshelves featuring classics, local authors and children’s books. Poetry is a featured section with a clientele that might seem surprising.

Currently, teenagers are driving sales. “They’re exposed to poetry with what we call ‘Instagram poets’ who engage with kids and have something to say.” He likens the phenomenon to a gateway drug. “Kids can only read so much of it before they’re bored, but it’s introduced them to the poetry genre which opens up a whole world for them. Instagram poetry attracts them in electronic form, and then they come in here to buy a book.”

Speaking of electronics, he recalls the time at Barnes & Noble when a woman came by with two teens, spotted a NOOK computer tablet, and offered to buy it. “One of the kids said, ‘No, this is a bookstore. I have an iPhone. I don’t need another toy — I want a book.’”
Haggblom says that young people use electronics so much, they need an escape. “More and more, they’re returning to the printed word, so they can shut down all the noise.” And although some people swear by electronic readers, numbers are on the decline.

According to the Association of American Publishers, both hardback and paperback sales grew last year, while e-book sales dropped about four percent. “People like to have a book in their hands.”

Haggblom cites a study in which students with physical textbooks retained knowledge better than those with electronic texts. “You can’t blame schools for the trend to paperless schools when they have to scrape for every penny, but they’re pushing out kids without the same retention levels.”

Poetic Justice is like walking into someone’s personal library or reading room, and in some ways, it is exactly that. “It reminds me of old coffee shops,” says customer and author Mary Dodge, enjoying the March open house in one of the overstuffed chairs.

The store has regular events featuring authors, several of whom came for the Chamber of Commerce’s ribbon-cutting. “It’s fun to watch the authors,” says Haggblom. “Some talk about writing or their book, but others share more life experiences, more inspiration.”

Poetic Justice offers a variety of genres, gifts and art, and Haggblom says the store is growing steadily. Whether looking for new or used books to enjoy, Port St. Lucie book lovers, who appreciate the value in buying local, can now buy both.