Homeowners opt for houses that can withstand hurricane-strength winds

STORY AND PHOTOS BY GREG GARDNER

No builder will tell you he can build a hurricane-proof house, but many are willing to go beyond building codes, hoping the home will survive a sustained super storm.

“A home can be a bunker and still be a palace,” builder Jim Harkins says. The co-owner of H3 Homes has built more than 30 monolithic, poured concrete houses in Brevard, Broward, Indian River, Martin, Miami-Dade, Monroe, Palm Beach and St. Lucie counties since 2007. The homes range from a 1,000-square-foot guest house to a 10,000-square-foot house in Broward County.

A 2,000-square-foot H3 home in Windmill Village has tie-beam construction, poured concrete first and second floors and roof — possibly the only structure of its kind among the 3,000 plus mobile homes on South Hutchinson Island. 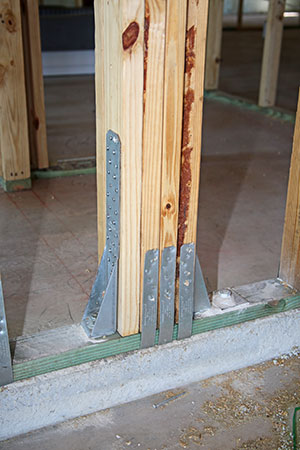 Key studs are bolted into the concrete slab. 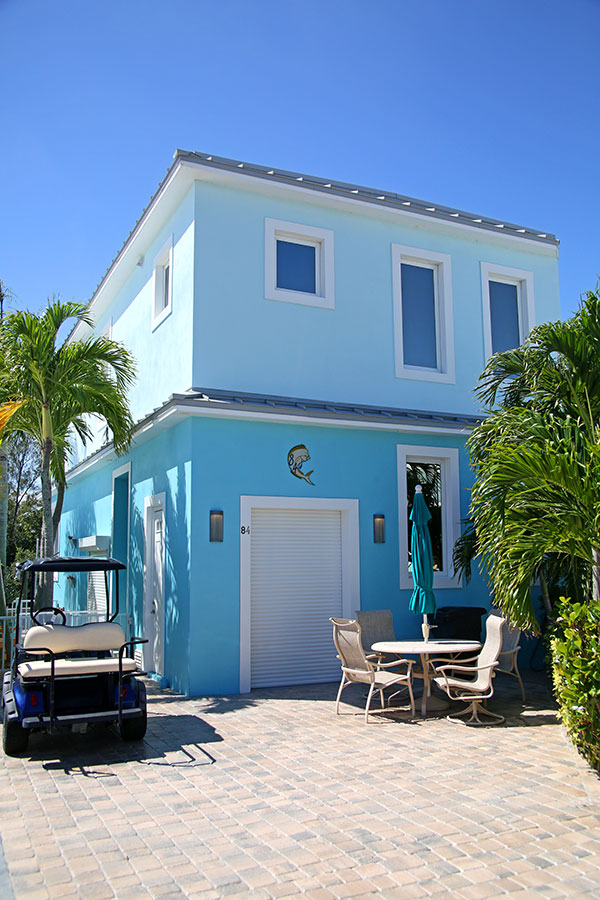 Built in Windmill Village by H3 Homes, this house is unique to Hutchinson Island with poured concrete floor, second floor and roof. 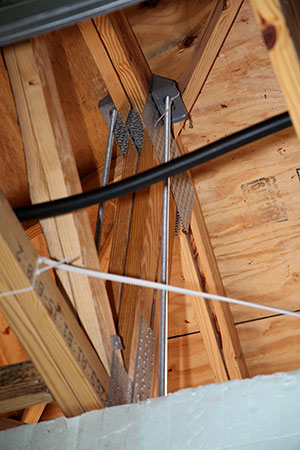 Tension ties provide additional strength to the roof already tied down with dozens of hurricane straps.

GOING BEYOND CODE REQUIREMENTS
Paul Robb, a residential designer for Backdraft Design Services who has drawn plans for more than 90 small homes in Nettles Island and Venture III, both in Jensen Beach, sees the changes.

“As codes become stricter, people are electing to spend the money to use pilings even if they don’t have to,” Robb says. “Some people are self-insuring and paying cash to avoid high insurance costs, but they know these houses are extremely strong. Also, the roofs are very small and could easily be replaced if necessary after a storm.”

“Every home I build is custom and no two are the same,” says James Newman, owner of JWN Builders and contractor for 150 homes for the past 20 years in Nettles Island. “Usually, I tear down the trailer, haul it away and then we build the house on the small lot.”

The houses have a square footage that ranges from 1,800 to 3,000, are typically two stories and have a starting price of about $350,000, he says. Since lots are often oddly-shaped, Newman uses custom-made, heavy duty hangers for beams designed to fit the unusual angles.

George Madden, a retired Florida Power & Light mechanical engineer, knew he wanted a poured concrete second floor to allow higher ceilings and give his 2,300-square-foot, three-bedroom Nettles Island home additional strength. He insisted Newman build without wood floor joists, which allowed for 9-foot tray ceilings on the second floor, which is used for living space — a rarity in Nettles Island.

“With a concrete block wall running through the first floor, we ended up with a closet that could be used as a safe room,” Madden says. “I wanted the extra height and the added structural strength.”

He saw some ceiling foam at a home show and found out Newman had the product in his contract. The foam is designed for insulation, but also adds strength to the roof, he says.

A 3,001-square-foot home Newman built in Nettles Island has three bedrooms, four full baths and a two-car garage that will hold two minivans. The two-story structure has a second floor balcony and roof deck with amazing westerly views of the Indian River. It is the only house since 2004 he has built with a barrel tile roof.

All of Newman’s homes are block filled with steel, poured concrete and pressurized core foam. He typically uses aluminum standard seam roofing with no exposed screws. The manufacturer of Galvalume, which is a coating consisting of zinc, aluminum and silicon that is used to protect a metal from oxidation, will not warranty its metal roofs built within two miles of brackish or salt water.

South Florida Building Codes, which were approved for use in Broward and Dade counties after Hurricane Andrew hit in August 1992 and are the strictest in Florida, require a home be able to withstand 170 mile per hour winds. Harkins’ H3 Homes recently finished an over-engineered 4,800-square-foot house in Sailfish Point with several measures added to take the punch of 200 mph winds.

The walls are 12 inches thick, Harkins says, and the house has impact, insulated triple pane windows you can stand next to and not feel heat from the Florida sun.

“Firefighters receive training to break these windows if they have to,” Harkins says. “A byproduct of using ICF (insulated concrete forms) is energy efficiency. My clients brag about their electric bills.”

Truss straps can be doubled to increase the strength of the connections between the house and the roof.

“When they request double straps for roof trusses, we do it properly,” says Harkins, who is partners with his brother, Phil. “If you don’t, you can actually weaken the truss with too many nails.”

The shell of a home under construction in Stuart West has several strength features soon be hidden from view. Two steel columns are bolted by air drill into the concrete slab on either side of the high ceiling foyer. At the top they are bolted to the trusses. Heavy ties also bolt the walls to the concrete slab.

In the back of the house are tension ties from the trusses to the poured concrete walls. Hurricane straps run the entire interior perimeter at each truss.

“We use EPS (expanded polystyrene) block and pump in the concrete,” Harkins says.

John Cherveny of Homes by JMC in Stuart recently completed a $1.3 million remodel of a 4,500- square-foot waterfront home in Martin County, complete with a safe room.

Built beyond the specifications used in Dade County, the exterior walls and the roof have extra steel with a solid pour of concrete. The roof’s barrel tiles were attached with adhesive instead of nails.

“There are air vents to provide oxygen for the safe house, and if you can’t leave in the event of a hurricane or tornado, this room would be the place to be,” says Cherveny, whose company has built hundreds of projects on the Treasure Coast for 30 years.

Homes by JMC also remodels older homes, often adding strength with improvements to both the interior and exterior.

“We often add straps to trusses and install hurricane impact windows and doors,” Cherveny says. “We also correct architectural mistakes in the process.”