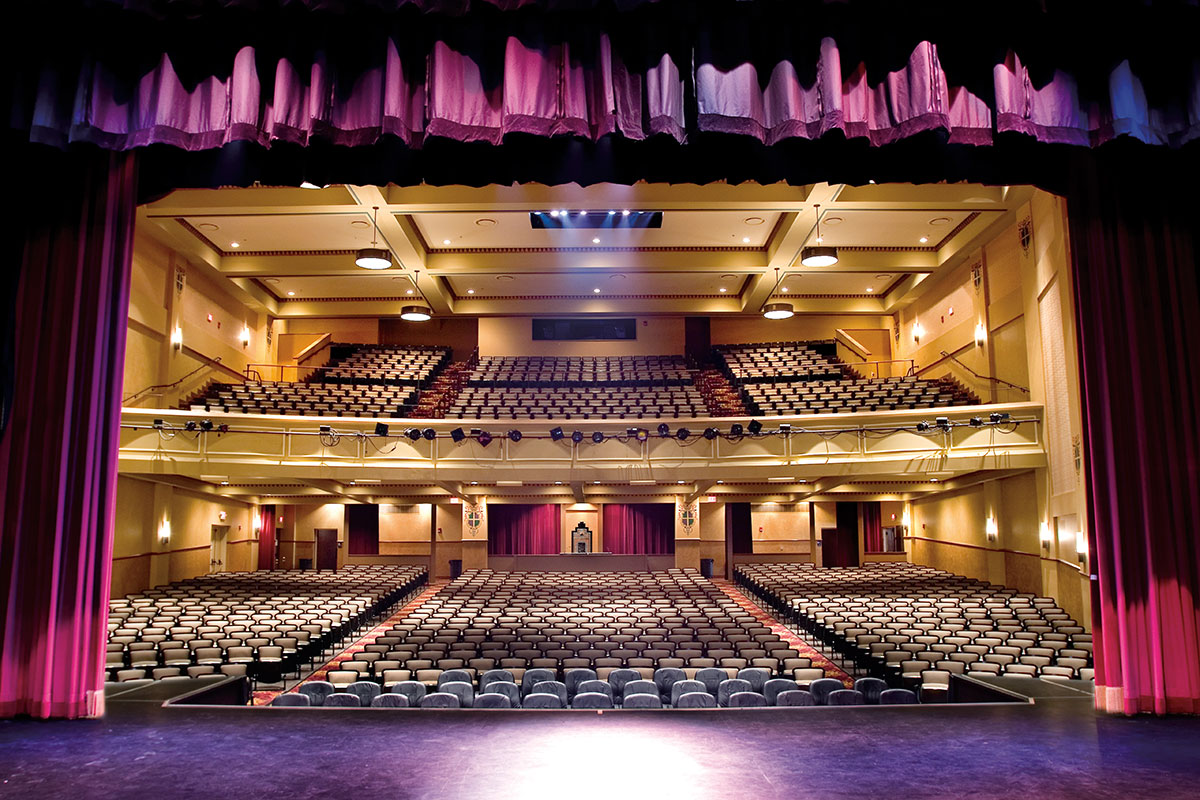 The beautifully restored Sunrise Theatre as it appeared in 2006 after a community-wide effort to reopen it as a performing arts venue.

Built in the era of vaudeville and silent movies, the Sunrise Theatre this season is marking its 10th anniversary since reopening as a performing arts venue providing an economic catalyst for downtown Fort Pierce.

The vision of impresario Rupert “Pop’’ Koblegard, the Sunrise originally opened in 1923 during Florida’s land boom, with 1,300 seats plus an organ and orchestra pit that provided musical accompaniment for the silent films and vaudeville acts popular at that time. The theater showed the first talking movie, Al Jolson’s The Jazz Singer, when it was released in the late 1920s.

Several factors, including the midcentury advent of malls and multiplexes, eventually caused attendance to decline. The Sunrise’s owners closed the theater in 1983, and for the next 23 years, it stood vacant in what had been the heart of a once-bustling community.

But when some dedicated visionaries gazed at the dilapidated building, they saw what it could become. Doris Tillman, executive director of Main Street Fort Pierce, and other residents active with Main Street/St. Lucie Preservation Inc., were already working to save historical structures, such as the old Mediterranean-style city hall, which faced demolition when a new building was built for city offices in the late 1980s.

They thought the Sunrise, restored and reopened as a venue for live performances, would be a boon for the community.

“We knew that it would have a strong economic impact for downtown, for restaurants and retail,” said Anne Satterlee, Sunrise’s marketing director. “So with that in mind, Main Street and St. Lucie Preservation did a feasibility study on how it would impact the Treasure Coast environment. We had the Lyric at the time in Stuart, Indian River State College, Riverside Theatre in Vero Beach, the Kravis in West Palm and the King Center in Brevard County.”

In fact, the King Center’s namesake, former Brevard Community College and Indian River Community College President Maxwell King, was among those who stepped forward to support the Sunrise project. A Fort Pierce native, King had happy memories of working and going to movies at the Sunrise, as did other key supporters, such as Bert Bittan, a lawyer; and two Fort Pierce mayors, Dr. William Dannahower and the late Edward G. Enns.

“A lot of people had fond memories of the Sunrise,” Satterlee said, “Bob Brackett renovated the historic Arcade Building around the same time as the Sunrise was being revitalized by Main Street/St. Lucie Preservation. His wife, Sandy, used to go to the Sunrise when she was growing up in Fort Pierce and later worked with her husband, Bob to restore this prominent structure in downtown.”

John Wilkes, Sunrise executive director, helped write the business plan and feasibility study for the theater but didn’t come on board until 2007. Instead, after the study was finished, he moved back to Sarasota where he was associated with the Van Wezel Performing Arts Hall. He also had worked at the Kravis Center for the Performing Arts.

The Sunrise reopened Jan. 6, 2006, with two sold-out shows by Dionne Warwick. For the most part, though, the first year was hit-or-miss in terms of shows, marketing and ticket sales. Satterlee said everyone was thrilled when Wilkes agreed to return to Fort Pierce to run the theater in 2007. With no shows booked, Wilkes quickly delivered the Sunrise’s first, full season of approximately 40 shows. He knew the entertainment industry well, had a strong background in business and possessed the right contacts to book a full season of top-quality shows. The results are reflected in the numbers.

“We’ve grown in membership and ticket sales every year since 2006,” Satterlee said. “More and more people are coming from Palm Beach and Brevard counties. Around January and February we get folks who come here from Fort Myers or Tampa just to see a few shows.”

More than 50 percent of the tickets are bought by residents of Indian River, Palm Beach and Martin counties and many people who were naysayers in the beginning have become staunch supporters through membership donations.

Wilkes said many of Sunrise’s members live outside St. Lucie County. “There are people in Sailfish Point, John’s Island and in Palm Beach who would never have come to Fort Pierce,” he said. “But now we have people all the way to Miami who are members of the Sunrise.”

The Sunrise has also transformed Fort Pierce’s downtown into a destination for a staycation. People from Stuart often dock their boat at the Fort Pierce City Marina and make a weekend of it, visiting the downtown farmers market, enjoying the restaurants, and of course, seeing entertainment at the Sunrise, which includes twice monthly Comedy Corner shows in the Black Box.

Wilkes said the theater has an estimated impact of more than $32 million a year on the local economy. Theater-goers spend money at nearby restaurants, shops and galleries, stay in local hotels, buy gasoline for their cars, go fishing on charter boats, play golf, and the list goes on.

“When you have 800 or 900 people in the theater, the downtown restaurants stay open,” he said.

Local artists show and sell their work at Art Walk, the outdoor show held downtown the second Wednesday of each month. It starts at 5 p.m., so when the Sunrise has a show that evening, people have more than one good reason to go downtown, said Ginny Piech Street, a ceramics, print-making and mixed media artist.

Street does work for Art Mundo: The Center for Creative Expression, which is at 111 Orange Ave., just around the corner and a block east of the Sunrise. She went to a Comedy Corner show at the theater in August, one of the region’s traditionally quiet months, and was happy to see how busy nearby restaurants were.

Wilkes said the show schedule has tripled in 10 years. Most of the entertainment is geared to older people — baby boomers and their parents — who constitute the majority of the region’s theater-going population. “I would like to see a younger market but I don’t think we’re there yet,” he said.

Other entertainers scheduled for the new season include Boz Scaggs, Howie Mandel, Air Supply, Patti LaBelle, Mickey Gilley, Neil Sedaka, Hotel California: A Tribute to the Eagles, and Frank Sinatra Jr., who is touring in honor of the centennial of his father’s birth.

“I think the great thing about the Sunrise is that more and more people are discovering it,” Wilkes said. “We see that in eight years of steady growth, in gross ticket sales and in memberships. Memberships are up by a third this year, and renewing members are increasing the size of their membership gift. I think we’ve come a long way.”