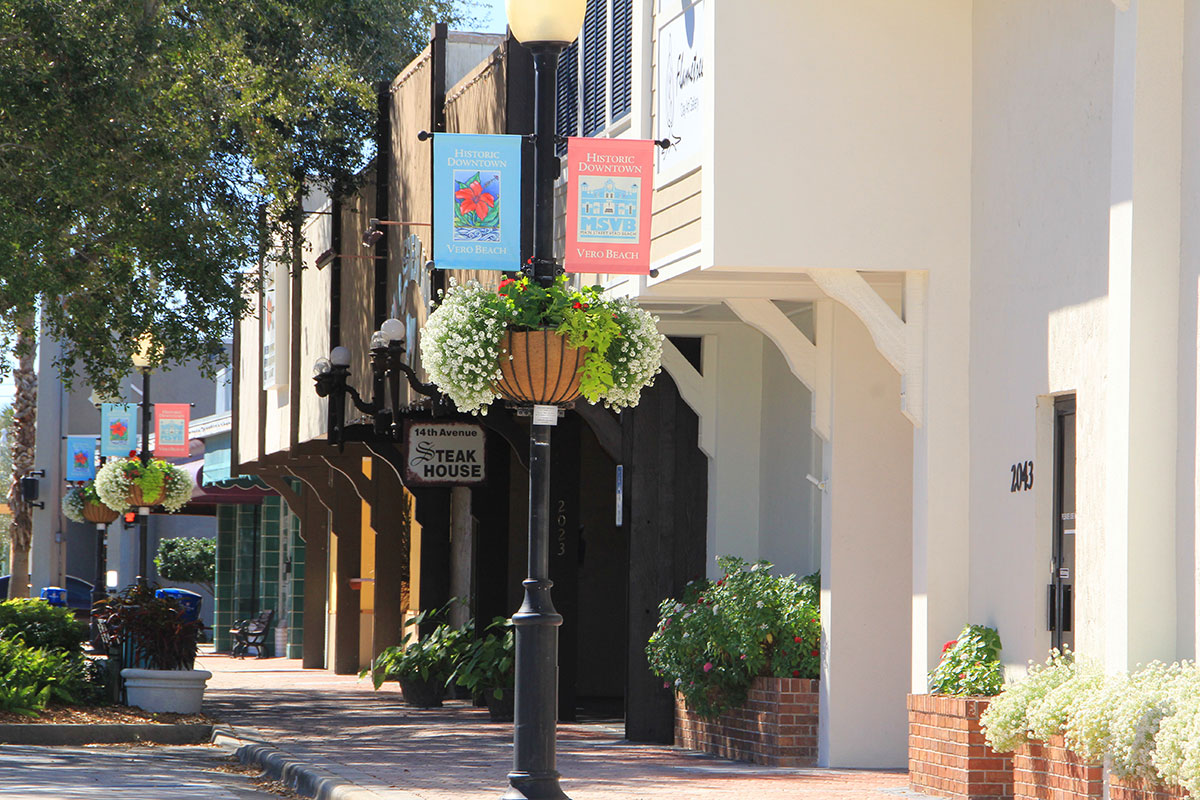 Downtown Vero Beach has changed since its incorporation in 1919, yet it continues to maintain its quaint feel with a nod to its historical past. CHRISTINA TASCON

Downtown pays homage to its early history despite modern transformation

When walking the streets of downtown Vero Beach today, it is difficult for anyone to imagine the Vero of 100 years ago. By 1919, when the small hamlet of Vero was officially born (“Beach” would not be added to the name for six years), the population was less than 800 souls, for the most part farming families who came here to leave the cold north behind for the promise of a better life. What there was of downtown existed primarily at the intersection of Osceola Boulevard and Seminole Avenue, now 20th Street (State Road 60) and 14th Avenue.

Just eight years earlier, Iowa developer Herman Zeuch arrived by train. Looking over the pristine wetlands he saw his future. He formed the Indian River Land Co. with partners and bought 55,000 acres, then in 1912 they hired an engineer from Daytona named Robert Daniel “R.D.” Carter to do a feasibility study.

“My grandfather said when he arrived in Vero he could stand on the Indian River bank and looking west he saw nothing but swamp land as far as the eye could see,” said Marvin Carter, retired president of Carter and Associates.

Charles Gilbert Redstone, a saw mill operator, came by wagon following paths used by local Indian tribes and wild animals. His sons, Bayard Taylor and Ray, brought the mill down by flatboat. They set up shop by the railroad tracks where 60 Minute Cleaners is today. They would provide lumber for most of the structures in the emerging town including the Woman’s Club building, built in 1915, that served as the town’s first library and still stands across from today’s Main Library.

SLEEPY START
Sleepy Eye Lodge, built by the Indian River Land Co. in 1913 with wood from the Redstone mill, was surrounded by vacant land in the heart of downtown. A railroad station, first built in 1903 on the east side of the tracks, was improved over the years and after passenger train service ceased in the late 1960s, was eventually moved to a site just north of Pocahontas Park. Today it is headquarters for the Indian River County Historical Society.

Farmer’s Bank also opened in 1914 on the corner of Seminole and Osceola. It operated until failing during the Great Depression. The building later was occupied by Indian River Citrus Bank and today is home to Vero Furniture Mart.

Electricity was a luxury in pioneer days. The first power provider, Vero Utilities Co., was privately owned, but the town soon outgrew the operator’s ability to provide for it. So the plant was sold to the city in 1920. A new brick diesel building opened next to the railroad and continuously expanded until a new plant, nicknamed Big Blue, opened in 1961. The old diesel plant continued to operate during peak usage times until 1968. It sat vacant for many years, but in 2017 was renovated and became the American Icon Brewery. Big Blue ceased operations earlier this year and the entire city electric company was sold to FPL in 2018.

Mosquitoes were the scourge of pioneers’ existence. It was not unusual to see people and animals walking around with a black cloud swirling around them. Homes and businesses placed smudge pots at the front door or entrance to keep them away, substituting the black cloud with black smoke.

Pocahontas Park has been the Central Park of Vero Beach ever since Indian River Land Co. deeded it to the city in 1921, although the deed was not cleared until 1953. The town’s first community center, built in the park in 1935, served as a servicemens club for Navy personnel training at the airport during World War II. After the war, it was returned to its original use until a new community center was built just north of it. The original center became an office for the recreation department and was renamed Vero Beach Physical Arts Center. It is now The Heritage Center. A plaque outside the building commemorates the spot at Pocahontas Park where William Jennings Bryan on July 2, 1925, delivered a speech for the county’s inaugural festivities.

GROWING PAINS
When Vero was formally incorporated in 1919, the city council named A.W. Young, grandfather of City Councilman Tony Young, as its first mayor. The first newspaper, Vero Press, started publishing as a weekly in September of that year. A rival paper, the Vero Beach Journal, was started by John F. Schumann in1926. Then in 1927 he merged the two newspapers into the Vero Beach Press Journal. It operated for years in the same location south of Pocahontas Park on 21st Street until it was moved to modern new headquarters on U.S. 1. The paper was sold by his grandson, John J. Schumann Jr., to the E.W. Scripps Co. in 1997. The original Press Journal building is the home to Ironside Press.

Also in 1919, one of Vero’s most admired city fathers, Alex MacWilliam, arrived from Cleveland, Ohio. He came for his health after surviving a mustard gas attack in World War I and stayed to leave a lasting mark on the community.

Among his accomplishments, MacWilliam helped create and name Indian River County; created the Indian River County Mosquito Control Board; served as mayor for 18 years; was a state legislator for five terms; introduced building-height restrictions; helped bring commercial air service and the Brooklyn Dodgers to Vero; created Memorial Island and what would become Riverside Park during Army Corps of Engineers dredging operations on the Indian River Lagoon; and had the legislature set aside money for the original Barber Bridge, which opened in 1951. The popular MacWilliam Park was created in his honor. 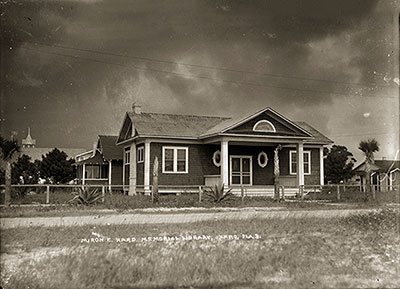 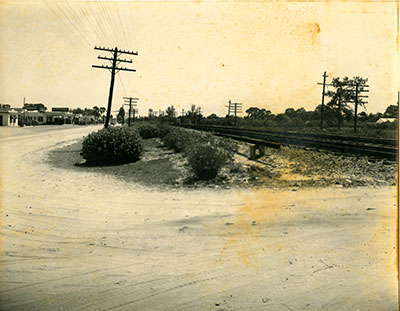 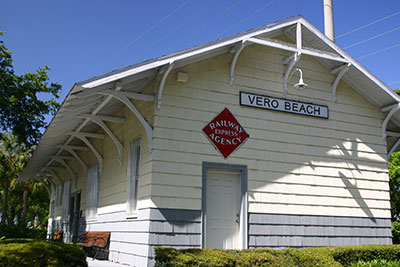 Vero’s railroad station, first built in 1903 on the east side of the railroad tracks, was eventually moved to a site just north of Pocahontas Park. Today, it’s headquarters for the Indian River Historical Society. CHRISTINA TASCON

The name change came after a wooden bridge was opened that year connecting the mainland and barrier island. Also in that year an incident occurred that is legendary in Vero’s history. After officials from St. Lucie County closed down Vero’s only movie theater one Sunday for operating in violation of county blue laws, a large delegation of city leaders visited Tallahassee requesting approval to create Indian River County. The request was approved and Vero Beach became the county seat.

That theater closed in 1985 after 61 years, but the building it was housed in is part of today’s Theater Plaza on 14th Avenue. In fact, the east side of 14th Avenue, from Vero Furniture Mart north to 21st Street, has been restored to its original 1920s look.

Pocahontas Park is still central to downtown as is the Pocahontas Building built in 1926. The old county courthouse next door, which was built in 1937 during the Great Depression and served from then until the current county courthouse opened in 1998, is known as the Courthouse Executive Center. One of the city’s historical figures, attorney James T. Vocelle, helped secure federal funding in 1934 to build the courthouse in the county he helped create back in 1925. His son, County Judge Louis B. Vocelle, helped design its replacement. His grandson, Louis B. Vocelle Jr., practices law in Vero Beach.

George and Viola Loy came to Vero in 1928 when George opened I.M. Men’s Wear. He changed the name to Loy’s Men’s Wear and it was a staple of Vero Beach retailing for many years. Their daughter, Alma Lee, followed in her father’s footsteps by opening another iconic retail store that would remain at its 20th Street location in the Maher Building for 40 years until 1997. To this day, Alma Lee Loy continues to be deeply involved in her community and even has a bridge named in her honor.

The Maher Building also housed many other well-known downtown businesses. The original wood building was home to Maher’s Department Store, but it burned down in the great fire of 1919 along with several other businesses. It was soon rebuilt and is still in use today.

As the years progressed so did downtown. On Saturday mornings literally everyone came there to shop or get together with friends while the children played in Pocahontas Park. Seminole Indians came to town and sold their wares. It was a close-knit community, even as the population grew into the thousands.

Then in 1960, the first shopping center came to town way out on the Miracle Mile Extension, the road that went from U.S. 1 to the Merrill P. Barber Bridge, named after another major figure in Vero’s past. A staple of downtown retail, Wodtke’s Department Store, opened a second location in the new shopping center. Bill Wodtke’s friends warned him that the center would fail because it was so far from downtown, but he was also visionary, knowing shopping patterns would eventually change.

And he was right. As the new Miracle Mile shopping district grew, downtown became less important. By 1985, when the downtown movie theater closed, retail stores became vacant reminders of what once was the heart of the community.

PHOTOS COURTESY OF THE DUBOSE FAMILY

These panoramic photos show downtown Vero Beach in 1925. The photos were enhanced by historian and photographer Jim Wilson. At top is a photo of the intersection of 21st Street and 14th Avenue taken from the Pocahontas building on the northwest corner of 14th Avenue and 21st Street looking south. At bottom is 20th Street and 14th Avenue. The photo was taken from the roof of what is now Scott’s Sporting Goods store looking northeast. The road to the right is now 20th Street, heading east over the railroad tracks. Midway on the right on 20th street is Dixie Highway coming onto 20th Street from the south. Fourteenth Avenue is shown in the center of the photo going north past the Farmer’s Bank that was still under construction at that time. 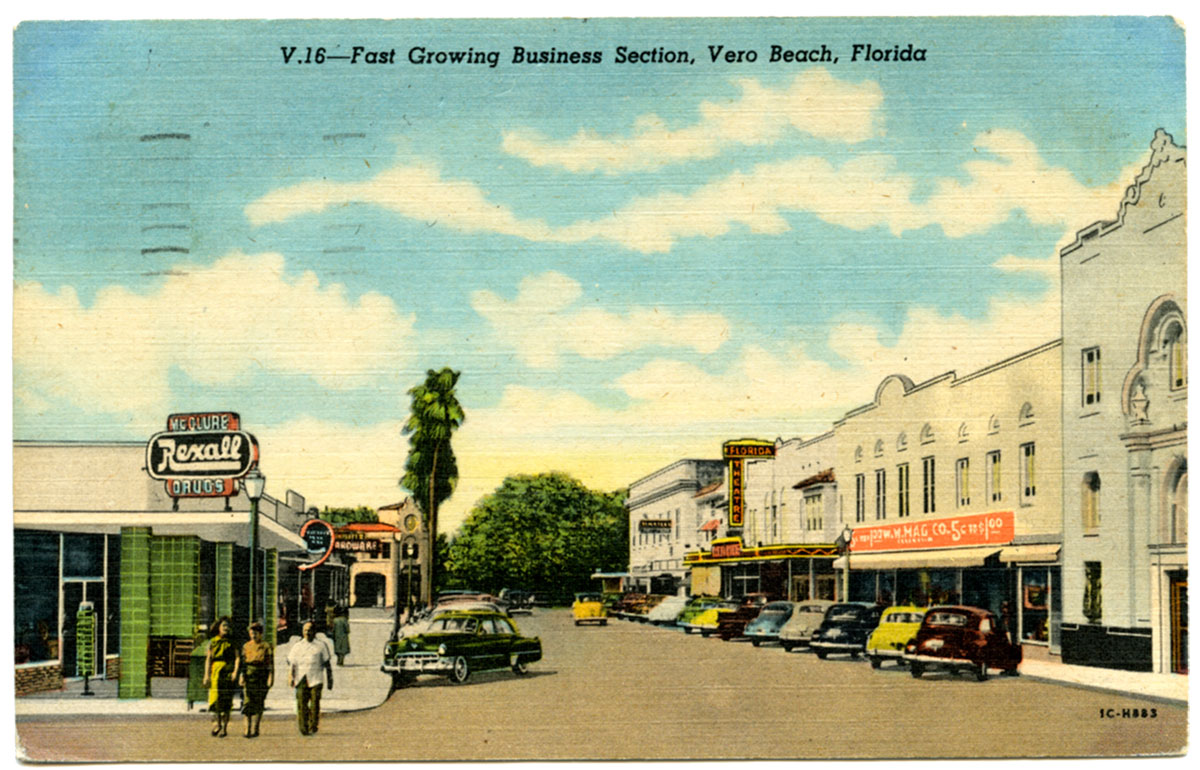 But that was to change, thanks to another visionary, Robert L. Brackett. Brackett came to town with his family in 1947. At age 26, he and his wife, Sandy, opened Merchant Credit Bureau in 1960. He did it with funding created by selling $100 shares of stock to 26 downtown business owners who would use his services, including George and Alma Lee Loy, Bill Wodtke Jr., John Schumann and others. His business struggled at first but eventually grew in significance and success well beyond Vero Beach.

With visions of a return to the downtown of his youth, when people knew and cared about each other, Brackett began purchasing properties including the vacant theater building, the old county courthouse and others. He made major investments to restore these properties to their former glory. Theatre Plaza opened on Oct. 26, 1991, but it would be two years before the first retail tenant signed up. Other investors followed his lead and began restoring downtown buildings, betting on the future. Today, the downtown district is thriving, not as it once was, but enough to bring smiles to all those who shared its loving memories.

This article draws quotes from interviews and conversations over 30 years.