Sportfishing charter boat captains are a tough breed. They have to be, living a sometimes precarious life chasing elusive fish every day for their livelihoods.

A competent charter captain always has to know where the fish are hiding and to be able to put his clients on the fish on demand. That’s hard enough to achieve during normal times, but the pandemic added yet another challenge for these rugged one-man entrepreneurs.

The early months of the pandemic sent shockwaves through the Treasure Coast fishing community. Charter fishing, along with much else in the tourism industry, was shut down for a couple of months. Yet before long, a rash of trip cancellations in March and April 2020 began to ease, local captains said, as anglers were going stir crazy cooped up at home.

It wasn’t long before they began to rebook charters and get back out on the water. Since then the charter business on the Treasure Coast has recovered — unevenly for some — and so far this year has proved to be a banner year — the best several captains from Sebastian to Stuart have ever experienced, they say.

Most of the five captains interviewed for this story shrugged off the effects of the pandemic relatively quickly after experiencing an initial burst of trip cancellations. One captain from Sebastian reported losing 17 bookings in three weeks. At around $1,500 a charter, that represents a sizable loss of income for one- or two-man businesses.

Since 2020, business has been up and down, yet most captains interviewed seem more concerned by a variety of other factors affecting their businesses, including rising gasoline and diesel prices; being unable to quickly get spare parts for their outboard motors; and the long-term environmental decline of their fishing grounds. Dirty water, excessive rainfall and pollution have decimated lagoon seagrasses that once sheltered and nurtured a broad variety of gamefish.

Austin has been fishing full time since 2009, after working for 21 years for the marine conglomerate Bombardier Corp. in research and design and marketing roles. He made the move simply because he loves working outdoors. Yet it has been a financial challenge at times.

“It is a fun job, but what [money] you take home doesn’t compensate for the amount of time you have to put in,” he said. “We keep money in the bank for our expenses and take paychecks every two weeks. A lot of guys rely on cash, but then often can’t get credit when they need to purchase big items like a new truck or boat.”

He recalled how March and May of 2020 were the worst months for loss of business due to the pandemic, but by May of that year, he said, people wanted to go fishing again. The summer of 2020 was pretty decent he recalled, but by the fall reservations had slowed way down again because of successive waves of COVID, children going back to school and other factors.

As in previous years, December 2020 and January 2021 were back on track and by February through August he had more business than he could handle.

“It was off the chain,” he said. “I guess people had gotten tired of just sitting around at home.

“We had a lot of new customers in 2021. We’d lost some to the pandemic,” but those cancellations allowed others onto Austin’s boat. “We never really shut down.”

Austin said he never insisted on face masks, reasoning that groups of anglers, even in close proximity to each other, would be in the fresh air and not susceptible to infection.

So far, 2022 has proved to be a good year for business, Austin said.

“We’re not seeing a lot more [customers], but maybe 5-10 percent more than the previous year. My son came back to help me out. He’d taken a job in agriculture while things were bad in 2020.

“Any slowdown we’ve had this year has been weather-related, not because of COVID” — mainly extreme [for Florida] cold and high winds. He could only recall one cancellation this year due to a customer’s son catching COVID.

Wildey has been fishing from the same spot in Sebastian, using the same offshore boat for 49 years, since he was 15 years old. He is old-school in his attitudes and his salty approach to the job. Commercial fishing is the only thing he’s ever wanted to do, Wildey said. Yet COVID presented him a challenge.

“When COVID set in, I figured we have to live closer to the belt but that’s how I’ve survived over the years anyway.”

Wildey isn’t bashful about showing his political allegiances. While he praises Gov. Ron DeSantis for keeping Florida largely open for business during the pandemic, he has nothing but scorn for President Joe Biden.

Among other things, he blames Biden for the astronomical price of fuel.

Perhaps surprisingly. Wildey reported that his busiest season to date was when COVID first struck. He attributed that to anglers being able to come to Florida free of shutdowns imposed elsewhere.

“I haven’t suffered until the fuel thing began recently. We raised our prices to absorb the rising costs but I can’t do it too much [without chasing off clients].

“In my 64 years, I’ve been burned, shot at and bitten by everything that swims and I’ve survived. I’ll always be a fisherman until I draw my last breath.”

Bushholz saw a shocking start to the pandemic, when 17 of his charters were canceled in the space of three weeks. But, as Bushholtz and other captains noted, stir crazy anglers soon began to charter again.

Bushholz did initiate one change in the face of the pandemic. Prior to COVID, he had been allowing single anglers to pair up with other groups to reduce their costs. Yet he didn’t feel comfortable doing that during the pandemic, preferring to charter to family groups. Recently he has begun pairing up groups again, he said.

He reported steady business from the Northeast, all vaccinated and boostered. Bushholz has never insisted on his clients wearing masks onboard.

As an inshore fisherman, Bushholz is more concerned with the long-term environmental decline of the Indian River Lagoon.

“We’re not seeing much bait fish now. But we haven’t seen [major] releases of water from Lake Okeechobee for a couple of years,” he said. “I hope the seagrasses will come back. Last year we had a lot of rainfall, which made the lagoon dirty because of runoff.

“And we need a complete new sewage system. A lot of older houses in Martin County on St. Lucie Boulevard, Indian River Drive and in Palm City all have septic tanks. And you’ll notice that many houses on the water have the greenest grass anywhere — all over-fertilized.

“We definitely need to send [lake water] to the south and re-do our plumbing, but I’m not holding my breath that’ll happen anytime soon.”

Rising gas prices have impacted Bushholz’ business in recent months, he said. He just increased his half-day charter prices by $50 to reflect having to pay $5.11 a gallon for fuel at the marina where he docks his boat. Most inshore captains trailer their boats to local ramps and get their fuel at gas stations. He has docked for the past 29 years at the Four Fish Marina in Jensen Beach.

So far, at the height of the snowbird season [December to Easter], Bushholz reports a decent season.

Longtime offshore skipper Colket recalled a hiccup in booking during the first few weeks of the pandemic, but said that business has generally been better than ever since those days.

“We have a constant flow of people around us,” he said.

Colket notes that most of his business comes from repeat customers and is generated largely by word of mouth.

“[A charter] is not a spur-of-the-moment [purchase],” he said. “It is expensive.”
And it’s getting more expensive with rising gas prices. Colket has raised his prices by around $100 a trip, he said. A three-quarter day trip now costs $1,300; a full day. $1,600. However, so far, he’s seen no customer resistance to the higher prices.

Colket fills his large 40-foot offshore vessel up at the city marina pumps with up to 400 gallons of diesel fuel. He’s seen the price go up by 50 cents a gallon recently. He fears he may have to add a fuel surcharge in the future. Typically his charters run between 12 and 15 miles offshore. Even though a diesel boat is more efficient, Colket said, it’s the journey to and from the reefs that really eats up the fuel. 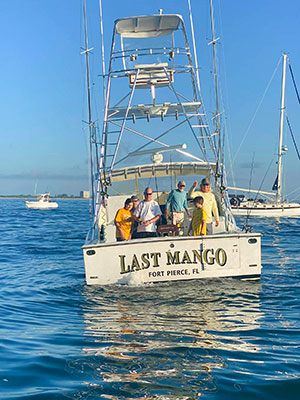 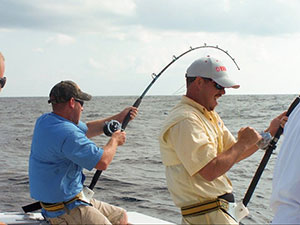 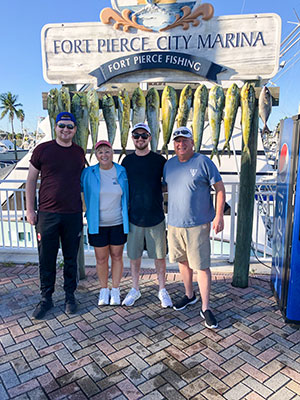 A group of anglers shows off their haul of mahi-mahi at the city marina following a successful day of fishing aboard the Last Mango. TRISTRAM COLKET

What’s in a name?

“Normal’s not me. There’s nothing normal about me!”

Dravo has been fishing on the Treasure Coast full time for 20 years, inshore about 80 percent of the time. He said he’s a fourth-generation captain.

“I grew up on the river since I was just a tadpole.”

He feels pretty sad about the decline of the lagoon’s marine and plant life, especially the loss of sea grasses. Yet, contrary to some reports, he still sees a good sea trout population on the river, but says they are becoming harder to find.

However, snook are plentiful, he reports, as is the redfish population. Yet all species are searching for suitable [and shrinking] habitat.

The same goes for the embattled manatee. Dravo said he’s seen no drop in numbers and even reported seeing three juveniles in one day recently. There is a cluster of 40 to 50 sea cows living in Taylor Creek, he says.

“But I feel bad for them. The authorities waited too long to help them until the water became polluted from runoff and sewage. The ones I’ve seen look healthy, not malnourished, but I still see them with scars from props.

“The authorities are trying to feed manatees lettuce and they are starting to plant sea grasses,” he said. “I’m seeing some sea grass growing but nowhere near what it was five years ago. We’ve had freshwater dumped here [from the lake], causing low salinity everywhere. It’s a shame but at least [authorities] are aware of the problem now.”

Dravo has hopes the situation can be turned around, citing successful efforts at improving water quality elsewhere, such as in Chesapeake Bay.

As far as the pandemic is concerned, Dravo reports being slammed with customers, even at the beginning. Tourism and business is looking good, he said.

“We’re slammed again now,” he said. “I have only four openings next month [March].”

The challenge has been far greater because of poor weather. Dravo said in January and February this year he only got on the water eight out of 42 trips because of high winds and cold water temperatures.

Rising gas prices have also impacted him. It takes $80 to $140 to fill his 22-foot Blue Wave flats boat. A typical charter covers up to 20 miles. Yet at least he can trailer his boat from his North Beach home and use a local gas station to save money.

“Marina prices are off the chain! It teaches you to conserve [all you can].”

Yet even when the fishing isn’t so good, Dravo believes in providing an entertaining adventure on his boat.

“I try to get them to laugh. I’m very sociable, personable. How much I entertain them depends on how much money they’re spending.”

Treasure Coast charter captains are dedicated individuals, resilient in facing and conquering challenges; the pandemic just made them dig their heels in harder. They do not seem like an endangered species.