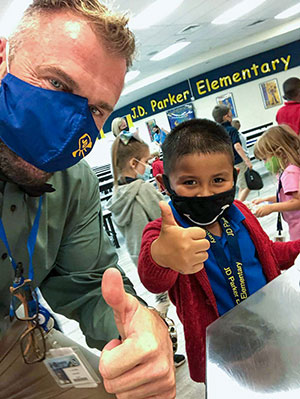 “I love it here!” he says with enthusiasm. “The community is vibrant. The people are passionate about education which sometimes those passions run strong — and that is a good thing. I would rather see passion for education and values than the lack thereof. They believe in education, and they value it, and it’s a beautiful place to live.”

The school board selected Millay after a yearlong search that involved community-wide participation. He assumed his role on Nov. 17, succeeding Laurie Gaylord who retired. He is Martin County’s first appointed superintendent.

Millay enters his office as a veteran in the educational field. He began teaching special education at the age of 23 and became an elementary school principal at 25. While serving as a superintendent for the last 14 years in Kentucky’s public schools, he also worked as an adjunct professor inspiring students at Western Kentucky University and the University of Louisville.

His strong leadership in education received the attention of top Kentucky leaders. For instance, he was recognized by the governor as a Kentucky Colonel and was awarded Outstanding Citizen by Kentucky’s House of Representatives. 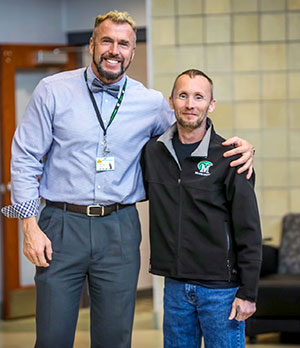 Millay is congenial and brings an enthusiasm to his new role. He stresses that he believes in serving the office of superintendent with integrity and positive energy. Driven and passionate about building students’ success, he explains how he sees a big part of his job.

BEGINNINGS IN THE BLUEGRASS STATE
Born in Louisville, Kentucky, Millay grew up in Meade County where he lived on a farm. He comes from a large, tight-knit, caring family. He is a middle child, one of seven boys and a girl.

“When you grow up on a farm, everybody’s working and going to school,” he fondly recalls. “You have a part to play. You help each other. So, I kind of had a humble background with high standards. My parents wanted us to do well in school and be respectful.”

Millay’s parents, Harold and Susan, owned and operated two restaurants in Irvington and Brandenburg, Kentucky. They instilled a strong work ethic in their children, and at 13, Millay began working there, honing good interpersonal skills.

“When you’re in a family restaurant type-of-work, it’s service and you’re meeting people,” he says. “You’re pleasing — you’re having to work hard, and work fast and work smart. You have to have good customer service, and you’re taking care of problems. People’s food is important, just like their kids.”

After graduating from high school, Millay earned a bachelor’s degree in elementary education and special education from Western Kentucky University. His sister, Beth, who was preparing for a teaching career in special education inspired him to enter the field.

“I’ve always had a heart for the vulnerable and working with special needs,” he points out. “After taking a course in it, I changed my way. I moved from business administration — I had a lot of accounting, a background in economics and really loved that part, too. But, I just felt the heart and call to do teaching. I felt a vocational calling, really. That’s how I look at what I do.”

Later on while working for Kentucky’s school system, he earned his master’s degree in education from Western Kentucky and a doctorate in educational administration from the University of Louisville.

PROVIDING PATHWAYS
During his tenure as superintendent, Millay mentored new superintendents on behalf of the Kentucky Department of Education to help build his profession, which he says has been one of the best joys of his career.

“I got to mentor some great people and build some great relationships to help pass on what has been passed on to me,” he notes.

As superintendent, Millay also helped develop digital literacy and instruction by putting computers into the hands of secondary students and teachers. He points out that his district was the first in Kentucky to offer one-to-one, nontraditional instruction by using iPads and Chromebooks. It provided equity and access in learning and helped close achievement gaps among students. The district was part of a pilot program with the state that allowed teachers to deliver learning packets, so students could continue with their school work using computers, even on snow days. By having access to these devices, students didn’t lag behind.

In 2019, Millay received a Best Practices Award from the Kentucky Department of Education’s Office of Learning and Continuous Improvement that recognized his district’s outstanding work.

It also honored Millay for his innovation and educational leadership and for establishing successful career pathways, college business/industry partnerships, and student transitions. The program offered nearly 30 career pathways for vocational and college-bound students to pursue that included manufacturing, construction, business, entrepreneurship, health care and computer science. The pathways program was also chosen by the state as a model for all high schools to follow in Kentucky. Not only that, Millay has received top recognition from the National School Boards Association for his notable initiative.

“In our community here, we’re going to be looking more at the workforce needs and making opportunities for all kids,” he says. “We want them all to have a life wage. The pathway is not just so they can get a certificate — we want them to do something with it. We want them to be able to raise a family and feel like they can afford to live in this community.”

HEADING TO MARTIN COUNTY
Millay says that he was won over by many things that led him to take on the new job as Martin County’s superintendent, especially its rich tradition of academic success as a high-performing school district and its commitment to education. As he plans ahead, Millay points to the district’s mission and vision statements, and calls attention to words like all, dynamic and excellence that are part of his goals when leading the schools.

“In Martin County, an education — our brand — has value for all kids, and we want to make sure that all kids and families have that access and experience it,” he explains. “Dynamic is knowing that change is needed, to be vibrant and growing. With dynamic, it reflects that we’re open to changing things if we can improve the life of a child or family. I think when we say excellence, it’s not just an average. We’re trying to get better, but it’s for all. Regardless of your wealth or poverty, we want that bar for everybody.”

“Schools should feel positive,” he says. “You should feel good when you walk into a school. I guess my test of this is when parents are dropping their kids off, our goal is they would say given other choices, that this school works for me. That feeling that they belong and are a part of something — that’s important.”

Millay says he would also like to expand early childhood programs like Headstart and other preschool initiatives, so that children can have a good start and a solid educational foundation.

Having a good education is not just a professional vocation for Millay, but rather it’s personal, a mission that he holds dear to his heart. As a father of three grown children — Allie, who’s an English teacher, Maggie, a pharmacy student, and Jake, an undergraduate student who plans to be an anesthesiologist — he values its importance so students can get ahead in life.

“I’m a parent and have raised three children,” he says. “You realize how much parents love their children and I get that. I really get that. It’s very personal, an education, and I want to make the best decisions for them, too.”

When Millay is not leading the school district, he enjoys pursuing outside interests in his spare time. He says he maintains his fitness by lifting weights and getting in a good workout. The superintendent also enjoys spending quiet moments reflecting and painting, focusing on acrylic landscapes and abstracts.

And as you would expect from an educator, Millay relishes his time with a good book. Some of his favorites are the Dan Brown series, John Maxwell’s works, and inspiring words from Abraham Lincoln.

“I like to think about what he did for our country, and really for the world — how he changed rights for everyone,” he notes.

As Millay looks ahead, he wants to make himself available, building relationships in the community and mentoring, so he can grow effective leadership. He says that great things happen for kids when people realize that you are invested in their education and you really care about them.

For him, helping all students succeed is what being a superintendent is about.

“I know it sounds cliche, but I like making a difference,” he says. “I like helping people and knowing that these big initiatives and lots of dollars help individually. I like to see it as this puzzle — it’s connecting all the resources, and the dots — and I like that, too.”