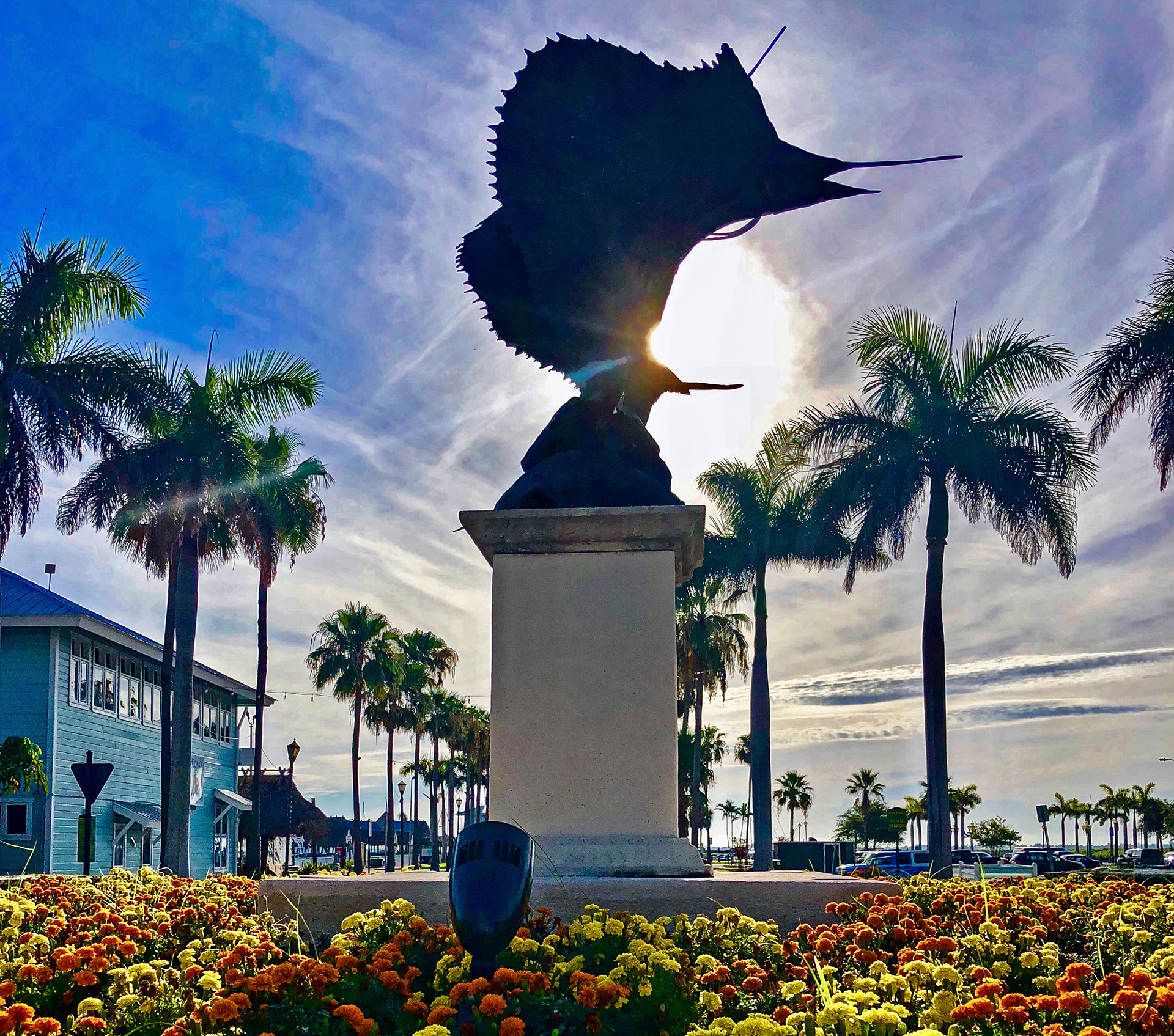 A sailfish sculpture towers above a bed of red, orange and gold flowers in the middle of a roundabout at Avenue A and Indian River Drive. Just past it is the Fort Pierce City Marina, Marina Square park, and the edge of the Indian River Lagoon. JOE SWEAT PHOTO

The Reader’s Digest says Fort Pierce possesses one of the most beautiful main streets in America. The family magazine, renowned for its prowess in condensing articles, arrived at that conclusion after compressing a list of thousands of attractive downtowns throughout the nation into a smartly chosen group of 20 that vacationers might want to visit.

The honor rightly belongs to the city that nearly 46,000 people call home, according to Mayor Linda Hudson. “The city is a hidden gem on the Treasure Coast,” she says. “It’s a blend of old and new Florida and is rich in history and culture.”

The Treasure Coast itself is named for the 1715 Spanish fleet pounded to pieces by the raging waves of a hurricane. Eleven ships sank to the sea floor, losing all the gold and gems aboard. Occasionally coins and other artifacts wash up on the area’s beaches.

Being named to the Reader’s Digest list has a lot to do with the thousands of hours spanning three decades contributed by Main Street Fort Pierce. The non-profit’s mission is to restore the historical downtown to its former glory. It does its job so well that in 2011 it was the winner of the Great American Main Street competition hosted by the Main Street America program of the National Main Street Center, a subsidiary of the National Trust for Historic Preservation. It has won other awards as well.

Doris Tillman, long-time manager of the local Main Street organization, speculates that the prestigious 2011 award may have caught the attention of Reader’s Digest writers. “We accomplished all the steps it takes to win that award and went over and above,” she says.

Those steps taken by Main Street and its many volunteers and businesses are a big part of what makes downtown Fort Pierce the success it is today.

Tillman says something else is happening though, and it is making the downtown come alive to set it up for future success. “The last couple of years the merchants are working together, teaming up and meeting monthly,” she says. “It’s a different feeling among the business people. They know that if they work together, they can succeed. The future is bright.”

The downtown is filled with small retail shops, services and restaurants lovingly presided over by their owners. Hudson notes that two new microbreweries now operate in downtown Fort Pierce, and a variety of international food choices are available from the small restaurants, many including fresh seafood from the lagoon and ocean with fresh vegetables from the Downtown Fort Pierce Farmers’ Market.

RENOVATION
Downtown restoration includes the old city hall, built in 1925 and now on the National Register of Historic Places. It was carefully restored and is used for different events. Going modern, commissioners went with a design for the current city hall that resembles a ship’s bow.

The old library was replaced by a comfortable new one across from the waterfront, so readers can simply cross the street to sit with a book in the Marina Square park on Melody Lane. The green-and-white P.P. Cobb building with its long front porch and wooden siding was built in 1886, fifteen years before the city was incorporated. First a trading post, it then became an oyster cannery (causing Fort Pierce to be known as Can Town) and eventually a general store. Now it houses small businesses and a museum.

The former home of landscape artist A.E. “Bean” Backus was beautifully restored and currently serves as the home of Main Street Fort Pierce. The A.E. Backus Museum and Gallery features his paintings as well as the art of the Florida Highwaymen, a now-famous group of African-American artists who learned from Backus. Both Backus and the Highwaymen are in the Florida Artists Hall of Fame.

The city has stayed true to its roots as a traditional small waterfront city with a down-to-earth look and feel, and a background reaching back to its earliest days in commercial fishing.

Carefully painted buildings highlighting the details of their Mediterranean-style architecture, quaint lamp posts, brick pavers, a restored 1923 theater and an attractive waterfront park along with public art sculptures make the historical downtown a magnet for visitors and residents. The city is in the process of revitalizing another area of its historical downtown: Orange Avenue, west of U.S. 1, now named the Peacock Arts District.

Events such as the farmers’ market, which draws about 5,000 visitors on Saturdays, the monthly FridayFest, the Jazz Craft Market, the Oyster Fest and the Pirate Festival in Veterans Memorial Park bring thousands downtown. “Our top-notch farmers’ market, held in the park every Saturday year-round, is consistently rated one of the top three in the nation and Florida,” Hudson says. The community celebration of the holidays, Sights and Sounds on Second, is a long-time family favorite.

Fort Pierce cherishes its history and its historical buildings, such as the Arcade Building and Boston House. Seven of the city’s buildings are on the National Register of Historic Places, including the 1923 restored Sunrise Theatre, able to handle an audience of 1,200.

Each January, Indian River Magazine presents the History Festival with re-enactors, tales of the past and walking tours to a crowd that grows each year.

The city also cherishes its waterfront — the centerpiece of its history as an old fishing village that led to its current existence as a quaint, beautiful American main street.

Hurricane Frances nearly made a direct hit on Fort Pierce in 2004. It was followed three weeks later by Hurricane Jeanne, the deadliest of the 2004 hurricanes. Together they smashed the Fort Pierce Marina and its boats and did major damage to the city. It took 10 years to restore and rebuild the marina. But along with that restoration, engineers designed and created unique curved islands to forever protect the precious waterfront from storm destruction.

The 156-mile Indian River Lagoon is well known for its thousands of species and for being one of the most biologically diverse estuaries in the nation. It’s often called the economic engine for the towns and cities that line its shores. Peering over a waterfront wall near the marina, it’s easy to see the fish swimming below. On the other side of the marina is the Manatee Observation and Education Center where residents and visitors flock to see the slow-moving, air-breathing “sea cows” swimming in the creek. Boaters can see dolphins frolicking in the lagoon.

“I love that Reader’s Digest discovered our beauty,” Hudson says. “I grew up with this magazine and especially loved the small-town features that made you feel you had a front seat view of wholesome American life. Fort Pierce is a perfect pick for this designation, ‘one of 20 most beautiful main streets
in America.’ ”

On the verge of discovery, Fort Pierce has been compared to other notable small towns with charming main streets. Main Street, Fort Pierce has seven National Register of Historic Places locations downtown, which includes the Sunrise Theatre, Moore’s Creek Bridge, and the site Fort Pierce is named for, the original Army post during the Seminole War. There’s also a ghost walking tour through the historic area! Events like the town’s annual celebration, Friday Fest, and its annual reverse raffle auction keep the downtown area lively, along with a farmer’s market—one of the largest in the state—that brings nearly 5,000 people to the main street on Saturdays.

WHAT CITIES MADE THE LIST OF 20?
(they are not ranked)

OTHER AWARDS FOR FORT PIERCE

2014: One of the Most Idyllic and Historic Main Streets in America — USA Today

2015: Best Small Town Main Street in America among towns with a population of 60,000 or less — Top Value Reviews