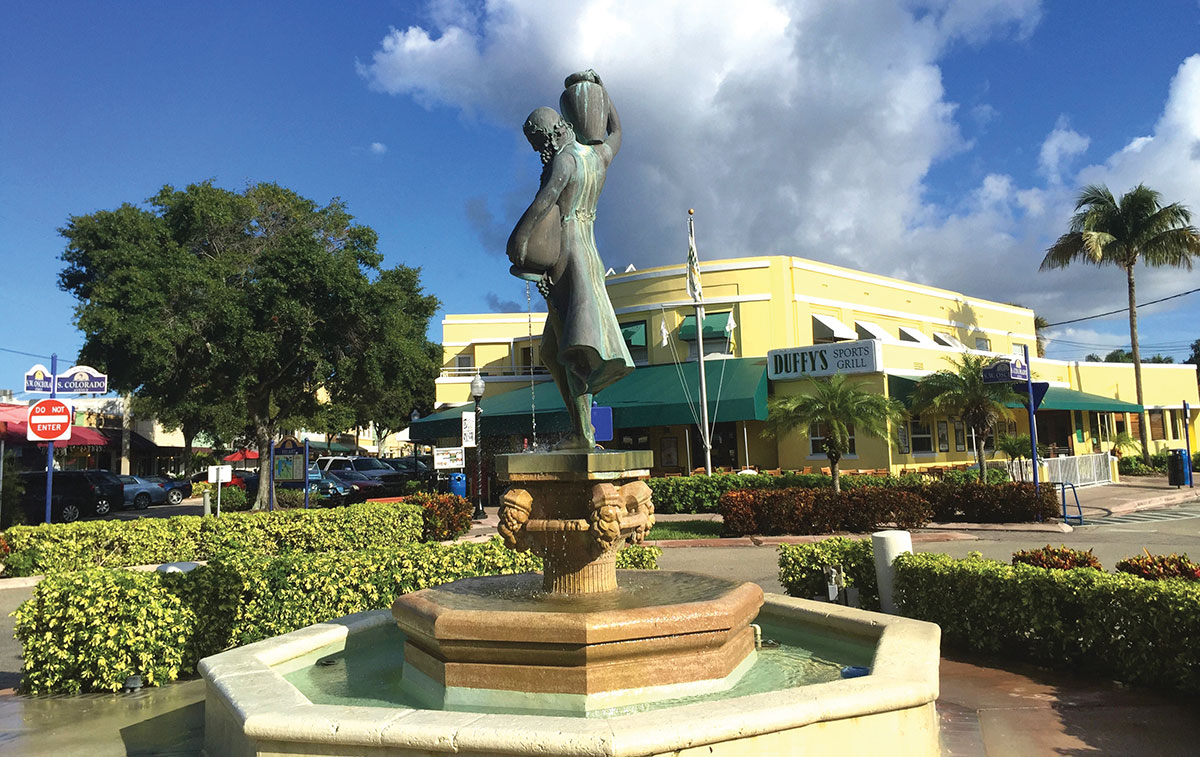 The bronze statue of Lady Abundance, a gift from the Women’s Club of Stuart, stands in the middle of Haney Circle on Osceola Street. DONNA CRARY PHOTO

Visit historical Downtown Stuart and you will discover a trendy, vibrant economic center that has been transformed by the thoughtful planning of a caring community. Here you will find an eclectic collection of locally owned shops, restaurants, galleries, a historical museum and a performance theater, in an old Florida setting that is updated with a hip, artsy vibe.

Most of the district is on Flagler and Osceola streets, where the buildings are painted in pastels and murals that evoke a kick-back, subtropical feel. Businesses along Flagler Avenue have two store entrances, giving customers easy access to both Osceola and Flagler streets and the rest of downtown.

Nestled by the St. Lucie River, downtown offers picturesque waterfront views from its Riverwalk, restaurants and parks, where you can soak in sunsets and watch sailboats drift by.

It’s a popular center where locals and tourists meet for all kinds of activities. You will find them wining and dining at indoors and outside cafes, shopping at a variety of charming stores, strolling along the Riverwalk and listening to outdoor concerts beside the water. You can enjoy an evening performance at the Lyric Theatre or barter for bargains at the Green Market on Sunday mornings.

“There’s a special energy here, and you’re made to feel like you’re a part of it,” Charlotte Glover said, a longtime resident who frequents the area.

It’s hard to believe, but in the early 1980s, Downtown Stuart was not the lively social and economic hub that you see today. With the moving of the post office and shopping strips popping up elsewhere, not many stores remained. The place had all but dried up. Abandoned buildings that once housed thriving businesses, empty storefronts, broken glass and deserted streets made downtown look tired and depressing.

“You could roll a bowling ball down either side of parking and not hit a car,” recalled Joan Jefferson, former Stuart mayor and city commissioner during this time.

Sometimes a community needs a kick-start to stir it to action: The proposed relocation of the Martin County Courthouse helped local residents to see downtown as a place worth saving. In 1984, the county suggested bulldozing the existing courthouse and building a new structure outside of downtown. City officials, local attorneys, downtown merchants and residents realized the move would be the final blow to downtown. Stuart Commissioner Jeff Krauskopf remembered those days, when they joined forces, wore yellow bands to show their solidarity and pleaded with the county to keep the courthouse in its present location.

“We said, ‘No! Stuart is the county seat. This is the heart of downtown, where commerce is good. A new courthouse will bring people here, and we need that revitalization,’” he recalled. Seeing that there was a real groundswell of support to stop the move, the county commission reconsidered and kept the courthouse in its historical location.

New life began to flow into revitalization efforts and the face of downtown slowly changed. A supportive city government funded and aggressively sought several additional grants that beautified the district’s appearance through improved parking, updated infrastructure and renovated buildings. A team of architects and landscape architects donated countless hours of their services to create a master plan that provided aesthetic guidelines for landscaping and redevelopment. Downtown merchants, led by Jim Dirks and Jim Blough, collected the resources needed to organize Stuart Main Street, a state-sponsored program that energized a slow-moving downtown.

“It was the community that rallied around it,” said Jefferson. “Where we didn’t have money as a city, the folks stepped up and made things happen.”

Momentum was building for downtown in 1987. The Lyric Theatre, which was owned by New Life in Christ Church, was up for sale. That’s when Roy Laycock saw a golden opportunity for the public to reclaim the old, grand performance hall as an entertainment center. Recognizing that downtown needed a hub for culture and the performing arts, he reached out to the community, and The Friends of the Lyric was formed. Supporters successfully raised the money to buy the building.

“Opening the Lyric will generate a sense of renewed community pride,” Laycock said in a news report in 1987. “It will bring people downtown after dark and spark new interests in performance activities of many kinds.”

Andres Duany, an acclaimed architect from Miami who is known for planning model traditional communities such as world-famous Seaside in Florida’s Panhandle, was recruited by Dan Cary of the Treasure Coast Regional Planning Council to commission a study to redevelop Downtown Stuart. “He’s a walking encyclopedia when it comes to successes and failures of towns,” Cary told officials at a city meeting held in April 1988.

Duany walked the streets with local architects, planners, city officials, engineers and residents for about a week and he didn’t waste any time in accessing and pointing out the problems. His criticisms stung at times, but the community leaders were hungry for improvement, and so they patiently listened.

At the conclusion of his visit, he gave a presentation to a packed, captivated audience at the then-rundown Lyric Theatre. There were holes everywhere in the Lyric’s porous roof, and with rain pouring buckets outside, Duany made his presentation while holding an umbrella over his slide projector. Interested audience members kept moving around in search of dry seating, as rain dripped on them, too. But rain couldn’t dampen the spirits or lessen the resolve of those determined people. After Duany finished his talk, he received a standing ovation.

“The people had hope when they listened to Duany,” Jefferson said. “Hope that he could give us a guide as to how to continue what we were doing, and he did.” The crowd immediately walked over to City Hall and the City Commission decided then to move forward with Duany’s plan. “When you have the heat, you have to move,” Jefferson said.

Duany’s concepts of creating quaint towns with pedestrian-friendly streets and defined open public spaces are rooted in old ideas such as the Roman city, Renaissance theory and Jeffersonian planning. It’s no wonder, then, that when he saw Downtown Stuart he focused on saving historical structures that retain character, embellishing roads that support the lifeblood of the district and opening up park areas for the community to enjoy.

Preserving the central part of the 1937 Art-Deco-style courthouse was at the top of Duany’s plan, as well as adding an adjacent bandstand and a newly designed Memorial Park. The idea was to restore the central part of the courthouse, which was architecturally sound. The less desirable attached wings should be demolished, he said, leaving a beautiful historical structure that could be used as an arts center.

Bright red vertical lines were painted on the building by architects Peter Jefferson and Dan Braden to dramatize which part would be saved. The courthouse was completely restored in 1990, and not long thereafter an Ansel Adams exhibit was on display, followed by many other art exhibits. The overall site today has opened downtown to public events, outdoor lunch hours and evening strolls.

Many other historical buildings downtown have been preserved, including not only the Lyric Theatre but the Stuart Heritage Museum, Woodmen Hall and the Kitching House.

Probably the greatest impact that Duany had on downtown’s overall look was altering the Department of Transportation’s plans for the new Roosevelt Bridge. This ultimately saved one span of the old drawbridge, Confusion Corner — a historical traffic landmark — and downtown itself. Revitalization supporters were up in arms over DOT’s plans to build an eight-lane bridge that would bypass downtown, reconfigure Confusion Corner and likely cause the downtown district to wither and die.

The city, through Duany’s help, had a better plan. It proposed that the new bridge have six lanes, saving two lanes of the old drawbridge — bringing traffic into downtown. But DOT flat out told the city no.

So, the city and downtown supporters armed themselves for battle: They became informed and strategized, participated in numerous meetings, and even held a rally of more than 500 people at Confusion Corner — to show DOT they were not going to disrupt their town.

Feeling the pressure and seeing the overwhelming support for downtown, DOT officials eventually changed their minds and accepted the city’s concept for the new bridge.

“At the end of the day, the bridge ended up architecturally and impact-wise not turning downtown into a no man’s land,” said Terry O’Neil, city planner since the 1980s. “And it meant that the old bridge span was saved, which was huge for the character of downtown.”

The scenic waterfront is one of downtown’s richest resources, and the city, as part of Duany’s vision, created the Riverwalk so the public could enjoy its picturesque views. The boardwalk begins near the band stage in downtown, and then winds along the St. Lucie River, where you pass restaurants, renovated parks, a fishing pier, the new Roosevelt Bridge and a public marina, in case you want to visit the area by boat.

Peter and Joan Jefferson came up with a highly innovative way to attract businesses back to downtown. They took up residence in the Post Office Arcade. The Arcade was abandoned, rundown and almost faced the wrecking ball, until the Jeffersons stepped in to save the historical structure. They partnered with Ann and David McMillan to purchase the building in 1990, so they could refurbish the space, lease it for select retail and make part of it their home.

“Everyone was saying ‘you’re crazy.’ We decided if we’re crazy, then we’re going to be totally crazy and make it happen,” Joan Jefferson said.

The purchase turned out to be a diamond in the rough. Special care was given to restore the old gem as the name and arch had been uncovered and recast to return it to its original state. As the Jeffersons and McMillans worked hard on their hands and knees sprucing up the place, locals began to see downtown in a new light.

“People began to come by and chat with us, and the next thing we knew, they were saying, ‘You know, they’re leasing those places. Maybe we should try to do that again,’” Joan Jefferson recalls. “So slowly the whole downtown became different. Rhetta B’s came in, the Lyric was functional, restaurants began to come in — Jolly Sailor was there — and the whole thing took off.”

Their unusual venture helped kick off an economic turnaround for Downtown Stuart. From 1987 to 1991, the number of businesses almost tripled — from 53 to 150. The vacancy rate fell from 60 percent in 1987 down to almost zero in 1991. Living there “was the best five years of our lives,” the couple said.

Since those days, the district has grown into a lively social and economic center, extending its borders along Flagler and Osceola streets and Colorado Avenue. There are no vacancies. Looking back, Joan Jefferson is proud of the advances that the area has made. It puts a smile on her face to see the return of downtown as the heart of the city.

“Communities are like people — there is a time to grow and change, and it was just that time. It worked.”