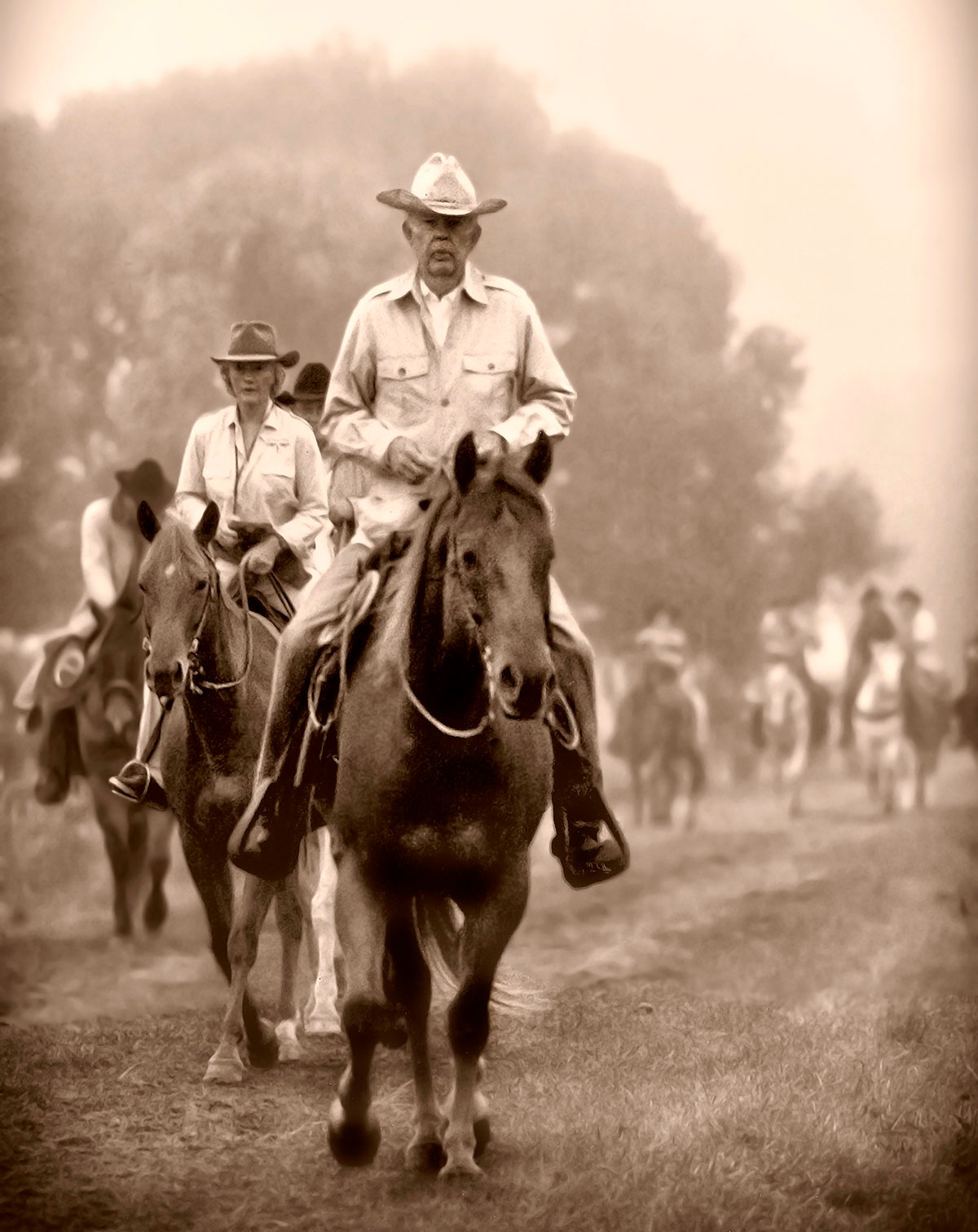 Bud Adams leads a trail ride at the family’s Lake Marian ranch in 1995. His sister, Elaine Harrison, is riding behind him. JON KRAL PHOTO

In the last half-century on the Treasure Coast, nobody was more liked, more loved, better known or more respected than Alto Lee Adams Jr.

Adams, 91, died Sept. 22 surrounded by family in the modest cypress home he built on Adams Ranch west of Fort Pierce for his bride in 1949. Until a stroke a week before he died, he continued to drive himself around the ranch that he spent 80 years tending and protecting.

Adams helped grow a modest operation his father bought in 1937 into Adams Ranch Inc., an enterprise that today consists of 50,000 acres in St. Lucie, Okeechobee, Osceola and Madison counties. At his home ranch in Fort Pierce, he hosted governors and senators, U.S. Supreme Court justices, movie stars and athletes — all falling under his charms as he quietly pushed a gospel of conservation. 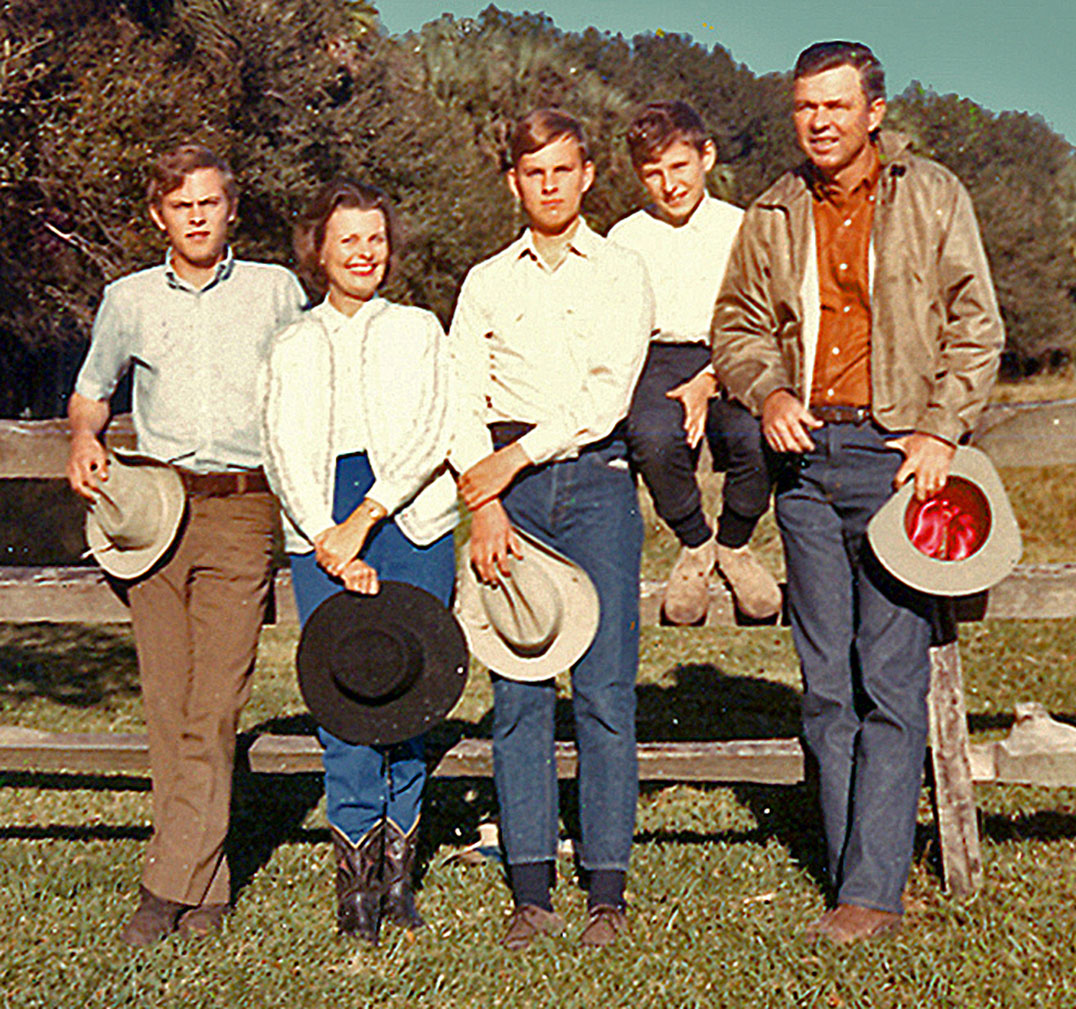 While Bud spent part of his childhood in Tallahassee as the son of a state Supreme Court justice, he and his wife, Dot, raised their sons on the ranch. Shown in this mid-1960s photo are Lee, Dot, Mike, Robbie and Bud. ELAINE HARRISON PHOTO

The story of Alto Lee Adams Jr., who invited everyone to call him “Bud,” is so much more than that of a homegrown Fort Pierce cattleman, who became one of the most successful ranchers in America. That in itself would be enough to talk about for years to come, the way he used his know-how in genetics to create two superior breeds of cattle: the Braford and ABEEF.

But the reach of Adams’ enduring fame goes much farther than the big circles of the nation’s cattle industry. That’s because of his other career — the one for which he didn’t get paid: teaching Floridians how to be good stewards of the earth.

He was born in Fort Pierce on April 4, 1926, Easter Sunday, in the midst of one of the wildest land booms that ever hit the nation. During his nine-decade span, he saw Florida rise from a scantily populated backwater state to an urban giant that decides presidential elections. He watched those changes from behind the scenes of Florida’s highest circles.

His father, Alto Lee Adams Sr., rose to become a justice of the Florida Supreme Court when Bud was just 13. And later his daddy ran for governor. By the time he was 22, the younger Adams had enough powerful connections to have harvested a bigtime legal and political career. But he missed the ranch his father had purchased before moving the family to Tallahassee.

“Politics was never my cup of tea,” he explained. “I told my father, ‘I’d like to go home and run the ranch.’ ”

The Navy had given him an education in science when it sent him to Emory University to study nuclear physics. Military officials had been astute enough to see that Adams had the kind of mind the country needed. 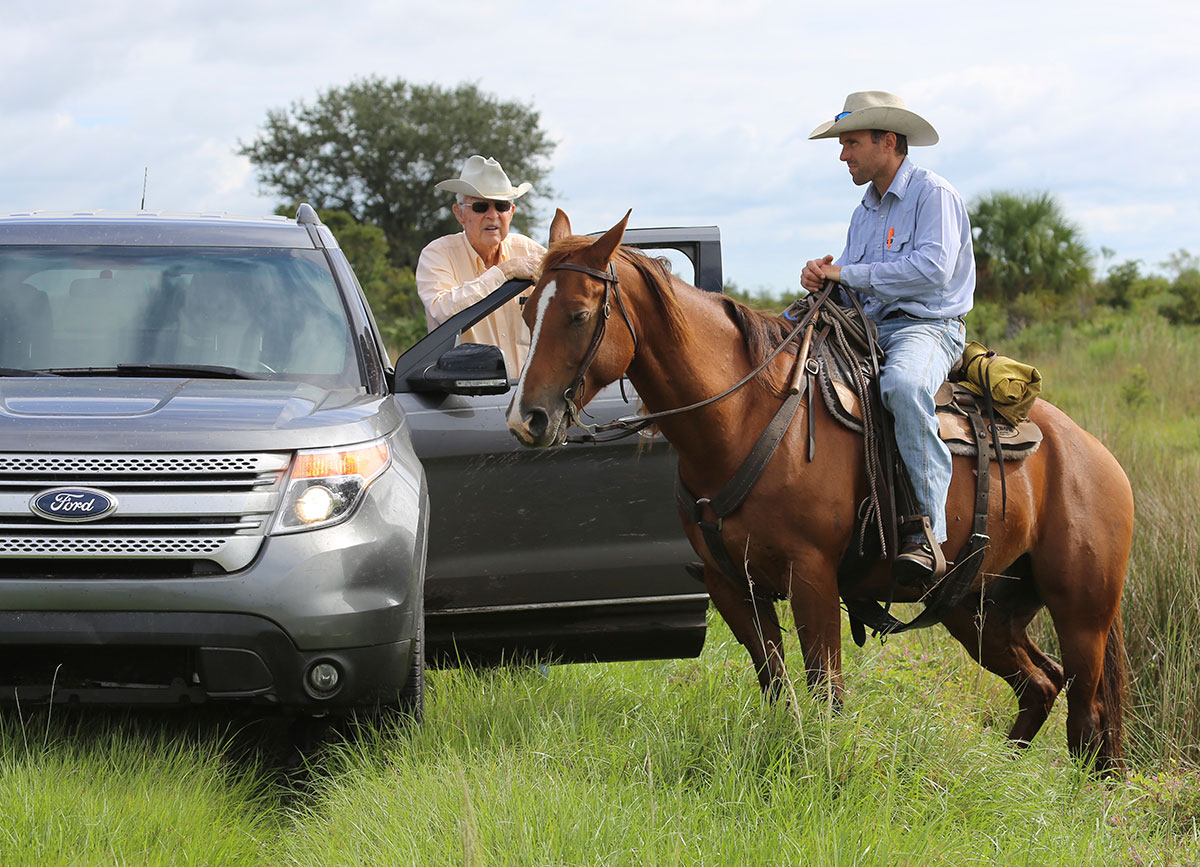 Bud talks to grandson Zachary Adams while making the rounds in his SUV at the Lake Marian ranch. ROBERT ADAMS PHOTO

“I was completely educated in hydraulics, thermodynamics — the whole engineering mix,” he said. “I couldn’t have gotten a better education anywhere in the world.”<

World War II ended before the military got the chance to use Adams’ amazing education, but in years to come his scientific training came in handy. So did the degree in economics he earned at the University of Florida.

Adams could have seized his opportunities anywhere, but he loved the land in western St. Lucie County. In 1948, when he began making Adams Ranch take hold, the place seemed as remote as when Seminoles were South Florida’s only inhabitants. In fact, some of the Native Americans still lived nearby in chickees. He hired them to help him herd his cattle.

From early on, he proved he was the type of man America has always admired the most: the rugged individualist. 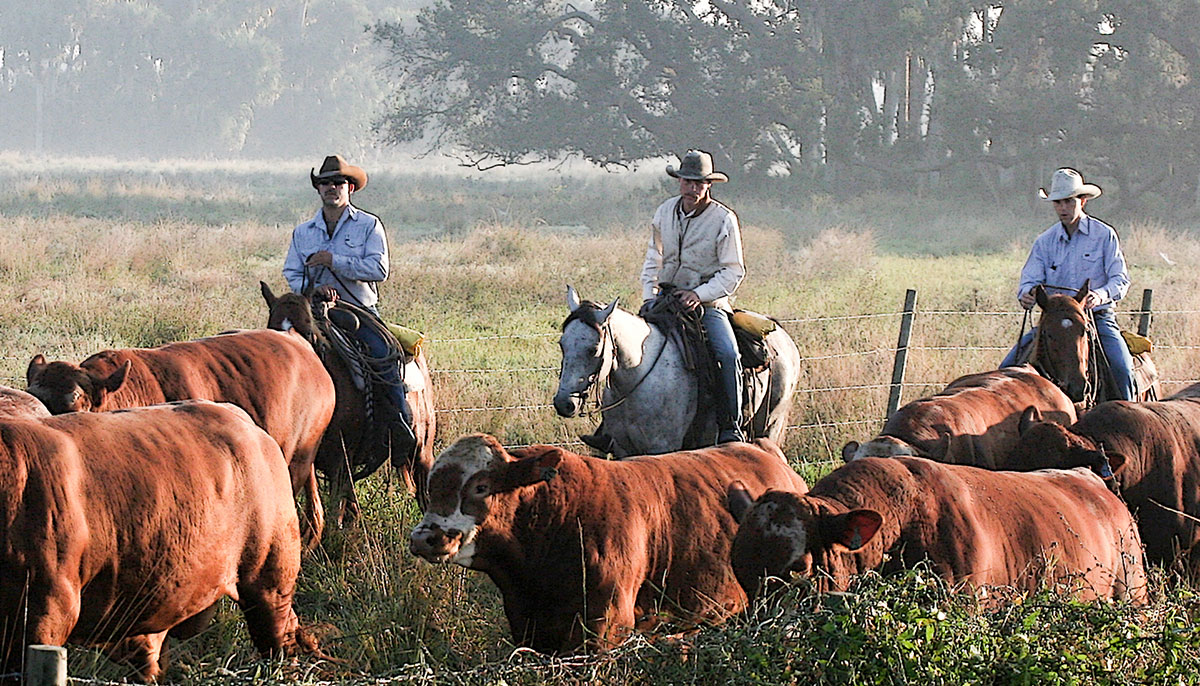 Cowboys drive Brafords to another pasture at the Fort Pierce ranch. In the 1940s, Bud developed the Braford, a cross between Brahmas and Herefords, which is known for its heartiness and ability to adapt to Florida’s climate. ROBERT ADAMS PHOTO

Adams was the best kind of family man, too, the kind who wants his children with him and his children’s children down through generations. He made the ranch a family business. He married “the best-looking girl at FSU,” Dorothy “Dot” Snively, a former Cypress Gardens belle from Winter Haven. In 1949, Bud built an unassuming cypress house for his new bride at the ranch, and they lived there all his life. That’s where they raised three sons — Lee, Mike and Robbie — who grew up to help him run the ranch and eventually take the reins. 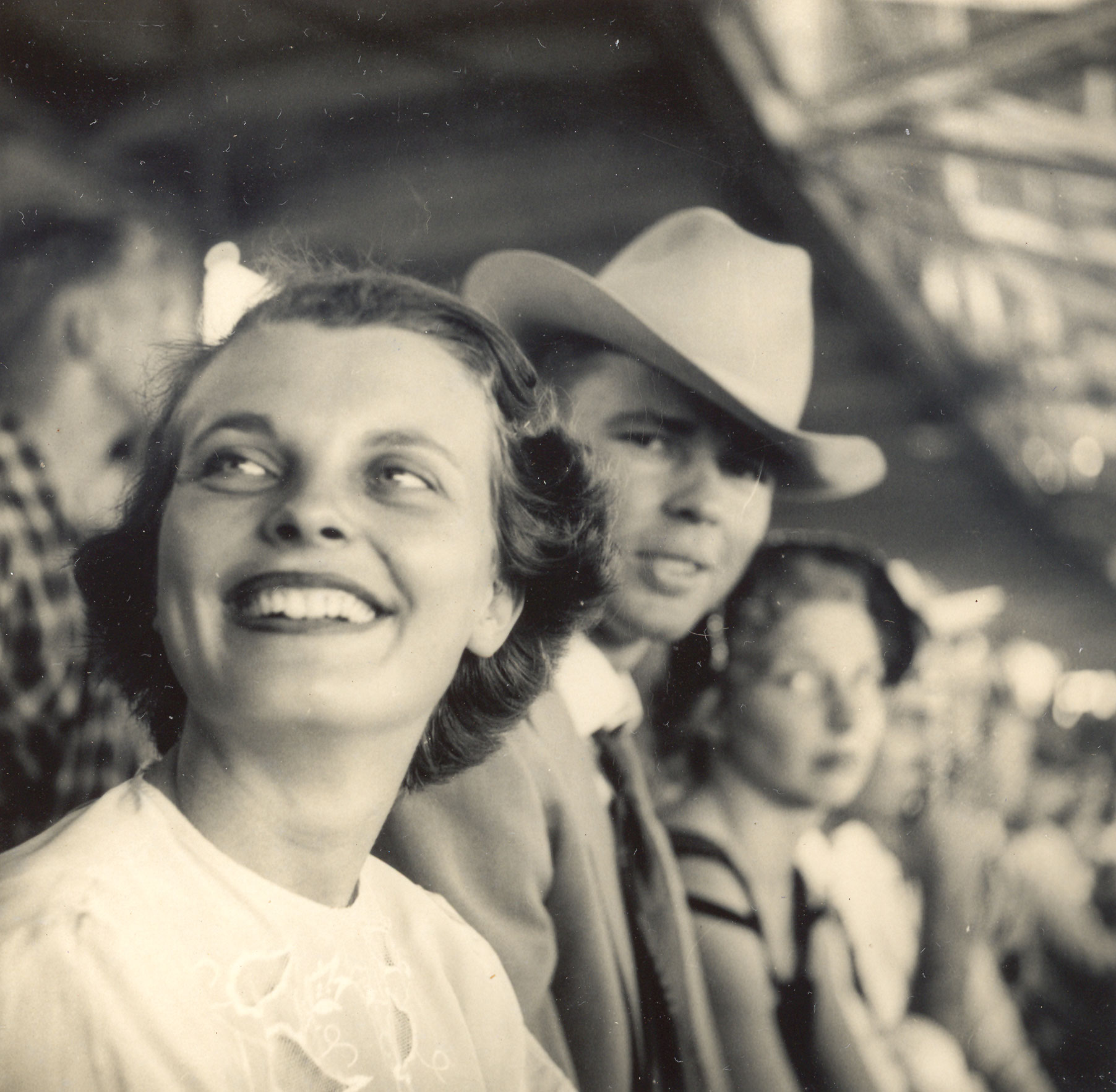 Bud and Dot at a football game around the time they started dating.

His devotion to Dot only intensified in the last 12 years after her diagnosis with Alzheimer’s disease. He was home with her daily, feeding her and ensuring she received the best of care.

Besides their three sons, the couple were grandparents to 14 grandchildren and nine great-grandchildren, many of them involved in the ranching operation.

The ranch was more than a place for cattle to graze and cows to calve. As Florida’s rampant urban expansion began squeezing out nature’s wide assortment of creatures, Adams made sure his ranch remained a habitat for all wildlife. He celebrated the many animals and birds on his land in stunning photographs he took. His photographs appeared as a regular feature in Indian River Magazine. 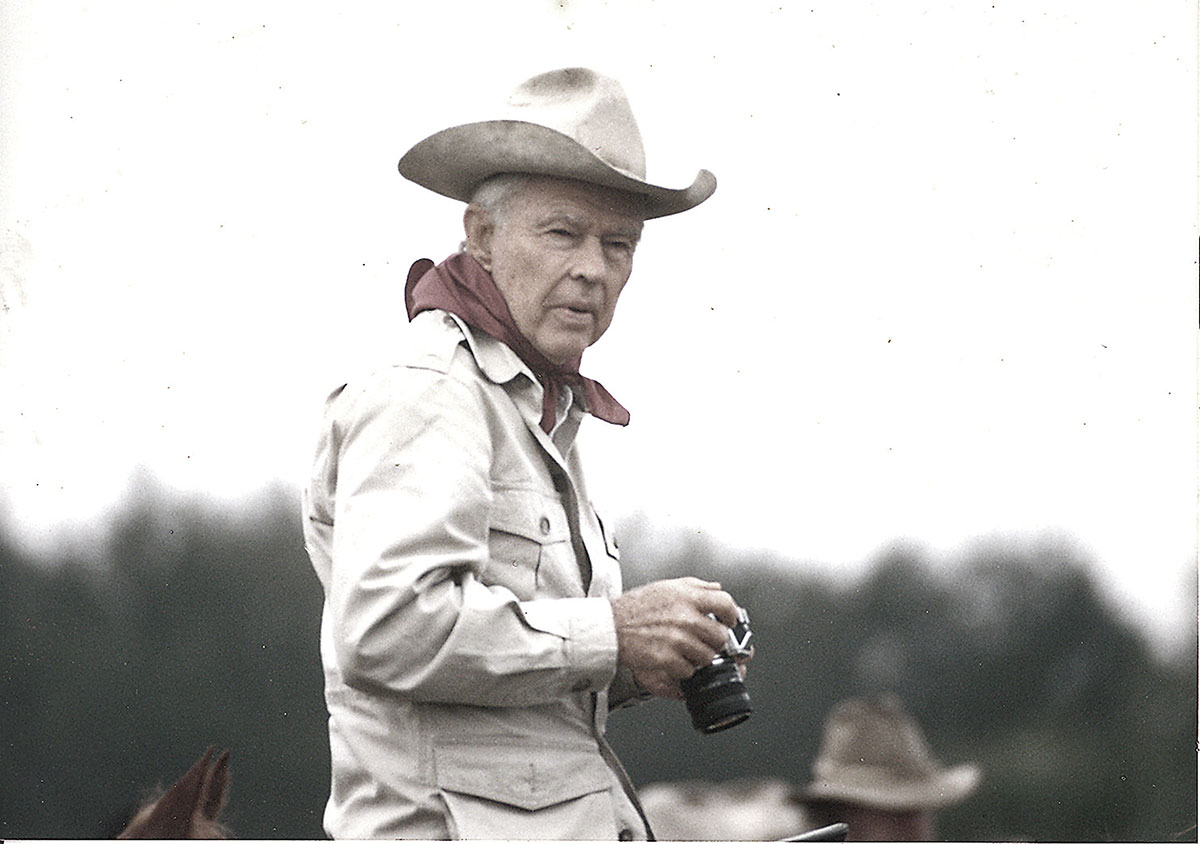 Bud was an avid photographer since the age of 10. He always had a camera with him when he was on the ranch and continued photographing even in his last days. Starting in 2006, his photography was featured in every edition of Indian River Magazine. JON KRAL PHOTO

“A perfect world is one with a good balance of man, animals and the land,” he often reminded listeners. “Our planning and preparation is not in years — it is in generations.”

Adams’ vision was to retain the best elements of Old Florida in ways that adapt to change without destroying the natural order of things. The story of Bud Adams is the story of a man who taught us the virtues of forming an alliance with nature, and he practiced what he preached. He never tired of sharing the beauty of Adams Ranch with visitors.

As a contemporary and friend of A.E. “Beanie” Backus, Adams shared the artist’s vision of the sterling beauty of Florida in its natural condition. Community organizations frequently took bus tours to enjoy the enchantment of his thousands of acres, and to hear him speak. He gave countless interviews and speeches. He always made time to patiently discuss the urgency for conservation.

Even as his years were drawing to a close, he was still saying: “At my age, I am concerned about how the land will look 50 to 100 years from now.”

Adams was a steward of the earth. He was the quintessential old-time Floridian, but he was inspired by a remarkable future-oriented vision. It was the quiet-spoken work of his life to teach that through a combination of rational engineering, aesthetics and sustainable agricultural techniques we can preserve a world that works for all.

“I have been given everything — much more than I ever desired,’’ he said in a note to friends and family. “I have loved my family and friends. I have enjoyed my cows, horses and dogs. I have lived on the most beautiful land, in a good climate, in a favored state that is a part of the greatest and freest nation on earth. I have no regrets.’’