Flying for those in need 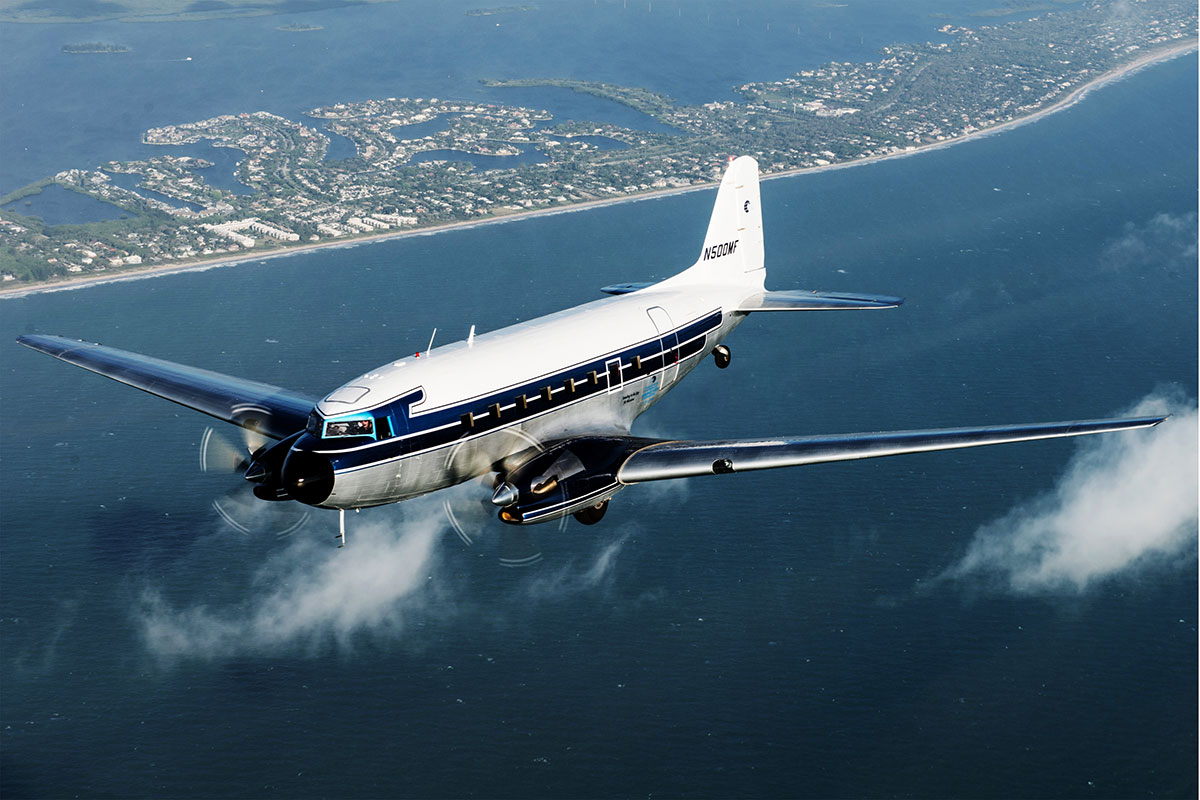 Missionary Flights International’s fleet of DC-3s are perfectly suited for the organization’s mission of “standing in the gap.” Through transportation, supplies, mail, even livestock, MFI fills a need for missionaries serving primarily in the Caribbean. MISSIONARY FLIGHTS INTERNATIONAL

An airborne missionary unit connects Florida with the Caribbean, ministering and bringing lifesaving provisions to people in poverty-stricken areas. Missionary Flights International is one of 32 businesses operating out of Treasure Coast International Airport and Business Park, off St. Lucie Boulevard in northern St. Lucie County.

MFI has been serving missionaries and mission organizations in Haiti, the Dominican Republic and the Bahamas for more than 50 years.

Twice a week at around 6 a.m., one of the company’s DC-3 airplanes flies to Haiti, loaded to capacity with mail, supplies and passengers, returning later that day. Some days the cargo may be live animals, such as young goats for the “Give a Kid to a Kid” program that teaches children how to raise and care for animals. There might be building material or food. The organization partners with nearly 500 other groups that depend on them for timely, dependable service.

Joe Karabensh leads operations at MFI, located at 3170 Airman’s Drive in Fort Pierce. A former flight instructor in Massachusetts, Karabensh joined MFI in 1996 as a pilot and mechanic, later managing the warehouse. Moving up to executive assistant, he became president in 2015.

MFI started in 1964 and had been located in West Palm Beach. Extensive airport renovations in 2000 split operations. The MFI headquarters moved to Lake Worth while the planes stayed on the tarmac.

“We looked at staying in West Palm, working with the airport to find available land. We never planned on getting a hangar,” says Karabensh. “They wanted us to move either to the north county or out in the middle of nowhere. Constantly getting supplies for missionaries, we wanted to be closer to stores. We looked at Miami and Sebring, but Fort Pierce was the best.”

Treasure Coast International Airport has what many other small airports do not: Immigration and Customs. St. Lucie County sweetened the deal even further.

“Counties own airport land. You can build a building, but you only lease the land. In Palm Beach, we could get a 20-year lease, after which we’d have to rent at the going rate. St. Lucie County offered a 40-year lease, renewable for another 40. Our response was, ‘Great!’”

Because fund-raising had already begun for a proposed move within Palm Beach County, funds for a down payment on a Fort Pierce building were on hand.

“We financed the rest and paid it off in four years,” says Karabensh. “It’s an awesome facility.”

In 2011, the organization purchased the hangar next door which currently houses a donated airplane.

“It will take years to refurbish it,” Karabensh explains. “It had been sitting in South Africa for 12 years, deteriorating. We got it for ‘free’ after paying $300,000 for back storage. New engines cost another $900,000, but when we are through it will be a $4 million airplane that cost us half that.”

All of the equipment to rebuild and repair the plane is onsite, saving more resources.

MFI owns two operational DC-3s, one of which was recently outfitted with a new kit enabling it to carry an additional net weight of 1,500 pounds.

“It allows us to carry more fuel so that we can go directly to Honduras and Belize without a fuel stop, saving time and money,” he says.

“These classic planes from the 1940s are great for us because of their versatility. We can load ATVs and large animals through the cargo doors and can configure them with no passenger seats at all, or some seats, depending on what we need to carry.”

The landing gear has also been specially adapted for landing on the grass strip at Haiti’s Pignon Airport using balloon tires.

All eight of Missionary Flights’ pilots are certified mechanics, their “A&P” designation signifying airframe and powerplant capability. A handful of larger Christian universities offer degrees in missionary aviation with training in both flying and maintenance.

“Our pilots and administrative staff are missionaries themselves, supported monthly by families, businesses, and churches,” he says. Missionaries helping missionaries, in other words.

“We’re limited in that we only fly on Tuesdays and Thursdays, so if you’re taking a group to Haiti from Saturday to Saturday, we’re not an option,” says Karabensh. “But we fly into the grass air strip, unlike commercial airlines. From the larger airports in Port-au-Prince and Cap-Haïtien, it’s a three-and-a-half-hour drive to that area on the worst roads in the world, crossing rivers without bridges! We land at the airports, clear everyone through customs, and get to the grass strip in about 12 minutes.”

MFI partners with organizations that supply not only humanitarian aid, but also spiritual aid. “An ancient saying says, ‘An empty stomach has no ears.’ The organizations we help meet physical needs, promote better farming and animal husbandry and so on, but they also spread the Gospel of Jesus Christ through ministry.”

Karabensh points out, “Haiti is at our back door. We are so blessed in the United States. We can complain about things, but most of the world doesn’t live like we do. About 80 percent of the world lives from day to day. Most Americans don’t realize that.”

He adds some people don’t donate to relief agencies because they are afraid of corruption or have heard stories of food rotting in warehouses.

“We work with folks who have been there for decades, who have necessary connections. Supplies get where they’re meant to go,” he says.

Haiti is the poorest nation in the Western Hemisphere, but observing over the years, Karabensh sees economic improvement.

“The infrastructure is better. Roads are getting paved. Solar panels are powering street lights. Advances are being made,” he says.

Missionary Flights International enjoys a good relationship with Haitian airports. After the earthquake in 2010, these connections enabled the organization to come in with tons of supplies.

“They know we’re helping people,” Karabensh says. “We could call them when we were about 10 minutes out and land on the grass away from all of the congestion.”

A flight to the Dominican Republic is added on alternate Tuesdays. In 2015, Missionary Flights International got verbal consent from Cuba to supply missionaries there, but three days before they planned to transport 8,000 pounds of cargo, Cuba balked before issuing written documentation.

“It’s still a communist country,” he says. “There’s the thought that it isn’t fair for one group to get medical supplies and musical instruments if everyone isn’t.”

As the organization expands, more pilots and mechanics are needed, but because they raise their own support, would-be associates can’t just walk in and get hired.

Volunteers are always appreciated, of course, to sort mail and donations, prepare for events and perform other activities. Sarah Smith coordinates volunteer opportunities.
“There’s a form to submit on our website (www.missionaryflights.org on the contact page),” she says, “or just give us a call.”

Groundbreaking has taken place for a five-acre hospitality park close to headquarters. Building will be done by Fort Pierce’s Richard K. Davis Construction in three phases: RV park, hospitality center and pool, and cottages for missionaries or work teams and other volunteers. All donations received for this project will be matched up to $1 million in 2018, with an additional $500,000 matched in 2019.

“Our motto (Standing in the Gap) comes from Ezekiel 22:30,” Karabensh says. “God says that he ‘sought for a man among them, that should ... stand in the gap.’ There’s a big gap between America and Haiti, and we stand in that gap through feeding programs, well drilling, construction teams, orphanages, our Christmas bag project, mail and package service.”

Oh, yes ... and those big beautiful airplanes that make it all possible.