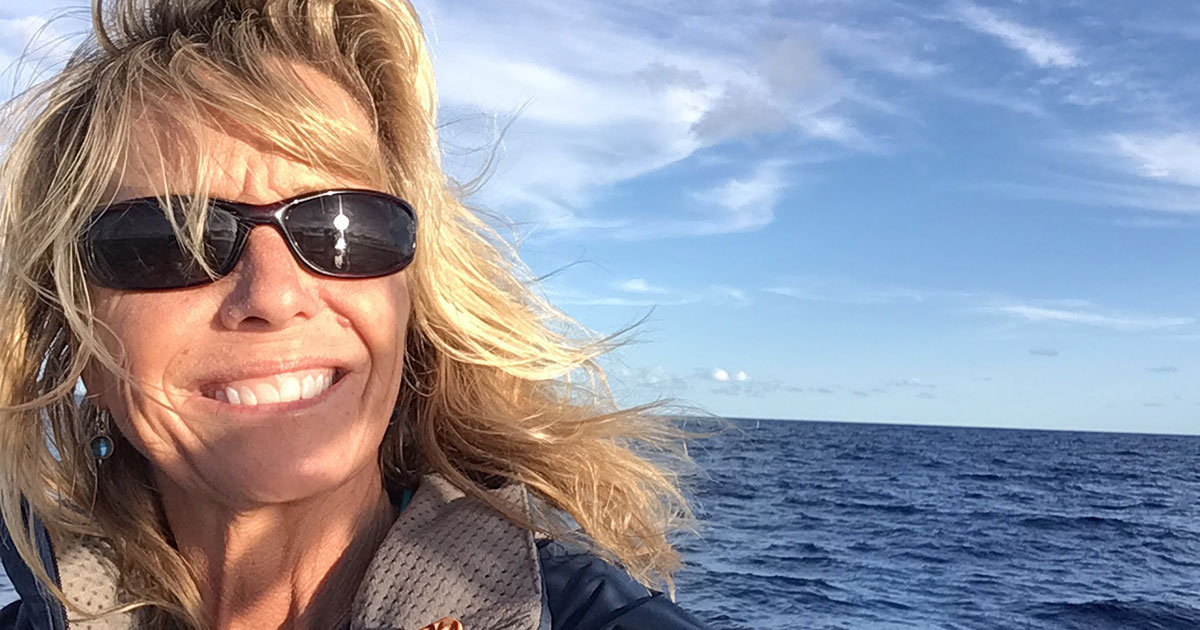 Growing up on Hutchinson Island with the Indian River as a playground, Rikki Grober Eriksen relished long sails with her father, the late and loved orthopaedic surgeon Ron Grober, and developed a love of all things marine.

Little wonder that she became a marine scientist, earning her PhD and going on to hold her current position of marine ecologist at the California Marine Sanctuary Foundation. And next week she will embark on a leg of a journey, leaving the Azores Oct. 27 and arriving in Antigua Nov. 18, that is taking women on a voyage around the world to raise awareness of plastic pollution and its effect women’s health. 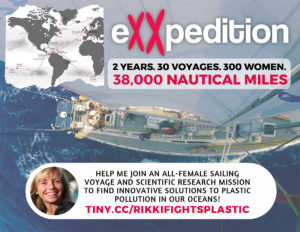 It’s a remarkable journey for a woman who, as a Florida State University student at age 19, survived a kidnapping ordeal in Tallahassee in early 1984 at the hands of Chris Wilder, who was known as the Beauty Queen Killer and was successful at killing at least eight women.

“I am honored to have been selected to serve as scientist on board from the Azores to Antigua leg, my first journey across an ocean,’’ said Grober, who is now known as Rikki Erikson. Her leg of the journey will be from Oct. 27-Nov 18, from the Azores to Antigua. "This voyage brings together women scientists, artists, educators, and media experts to identify ways to empower local communities, shift consumer choices, ignite a social media and awareness campaign, and raise the alarm about the enormous long-term health impacts plastic has on our bodies. I have been asked to sail for three weeks across the Atlantic garbage patch from the Azores to the Caribbean, as a scientist and training and outreach specialist on the 70-foot ketch.

Indian River Magazine Publisher Gregory Enns interviewed Eriksen just as she prepared for her voyage. Here are her responses via email.

Describe growing up in Fort Pierce.

I grew up on Thumb Point on the Indian River, and at the age of 9 my dad, Ron, gave me a row boat. Myself, Joan Carbonara and Scott Neff used to explore all over the Indian River in that thing, back in the days when the island was all mangroves, spoil islands and filled with manatees, sharks, rays, horseshoe crabs, fiddler crabs and dolphins. Many a time we got stuck on the spoil islands during torrential lightning storms, of course my parents had no idea we went that far or in such conditions since those were the days where we explored outside until the street lights went on and the mosquito trucks (which we used to follow) were done spraying! My dad got us our first sailboat when I was 7 or 8 years old, an old windmill. And we used to practice the “Grober” approach , which was to head straight for the dock and turn up into the wind and drop the sails all at once approach. In the late 1970s my dad started taking us first to the Abacos and then the British Virgin Islands sailing every year with my mom, sister, Suzanne, and myself. The Indian Rover was literally my back yard. We had several boats at any given time on the dock, and spent countless hours in and on and under the water of the river.

eXXpedition Round The World: S/V TravelEdge from eXXpedition on Vimeo.

How did that affect your career choice?

Growing up on the Indian River was a gift given to me by my parents — at a time when the river was teeming with life. One chore my dad used to give me was to scrape the pilings — which were vibrant colorful and filled with sponges, tunicates, crabs, shrimps, tropical fish, oysters, in purple, turquoise and yellow hues. There was little to no algae covering the pilings. The Indian River Lagoon is one of the most diverse waterways in North American, home to thousands of plants, animals and a pod of resident dolphins — about 800 of them. We were often scared of the water since there were always big things lurking — giant sting rays bigger than our row boat, schools of bait fish hundreds of meters across which lured larger fish like tarpon in close, and flocks of skimmers, sand pipers, sanderlings, wood storks, white pelicans, roseate spoonbills, and hundreds of pelicans were common and expected. Over time, the Treasure Coast became “discovered” by people searching for the real Florida — and change in the form of bulldozers, high rises, and drain and filling in wetlands became common practice. In the 1970s roughly 100,000- 200,000 people lived on the Indian River Lagoon watershed whereas today over 1 million live there, and some 10 million visit here every year. That brought changing demands for fresh water, with water being held back in the complicated irrigation canal system of Lake Okeechobee, and polluted or nutrient rich water being dumped in the St Lucie river and canals that make up the Indian River lagoon. Extremely high inflows of freshwater are suffocating the waters of the river, and causing algal blooms. As I watched this happen growing up, I decided I wanted to be part of taking care of our ocean and dedicated my life to ocean conservation. Actually after I got kidnapped I realized I hadn’t saved a seal or done anything significant at all with my life, and it really woke me up in a good way — but people don’t wanna hear about that!

Where did you go to school locally?

I went to Indian River Academy, then St Andrews, then John Carroll, and graduated from Westwood.

Where did you do your undergraduate and post graduate work?

How were you selected for the expedition?

I was selected from a pool of thousands of applicant [and was chosen] due to my scientific expertise, sailing knowledge and understanding of local community conservation projects. [I know how] to put ideas into real world practice in small island communities. I've worked across the Caribbean, the South Pacific and Central America on coral reef community based projects and this will come in very handy.

Is plastic pollution a specific interest of yours?

Absolutely. I sail and dive around the globe and the increase of plastic on the surface of the seas is heartwrenching.

Describe how it affects the Atlantic near the Treasure Coast and the Indian River Lagoon?

Plastic pollution affects the Indian River lagoon — microplastics were found in 16 out of 18 samples taken in the lagoon and our shellfish in the Indian River has the highest-known numbers of microplastics in the world. Offshore plastic pollution is causing loss of plankton in the Atlantic Ocean — the base of the food chain for all sorts of fish. Without plankton, we have smaller schools of bait fish who are food for larger sport fish like marlin and dolphin. Inshore, plastic pollution contributes to contamination of the lagoon, with little known about the health consequences of microplastics, which break down into plastic polymers. We ingest these polymers when we eat fish and shellfish that have absorbed plastic. The itty-bitty plastics accumulate in bigger animals — like us and birds and fish that we eat. That means that the metals, toxins and harmful additives associated with plastics are magnified when we eat them.

Will you be conducting research during your leg or will there be research being conducted on the schooner?

Yes, we will be researching the global extent, abundance and plastic polymer types in surface water and the influence of ocean currents on their distribution. We will explore how currents influence the patterns and pathways of plastics, where do they accumulate in the ocean. We are also going to do DNA analysis to look at microbial communities associated with microplastics. We are also going to study the composition and distribution of different plastic polymer types in the upper water column and also take sediment samples to understand whether plastic polymers are being taken up by sediments and if so how and where? We are also taking phytoplankton samples — over the past decade phytoplankton has declined by 40 percent — plankton is the basis of the food chains and critically important to all life in the ocean. We are interested in understanding whether plastic polymers are contributing to declines in plankton abundance. We will also look at weathering of microplastics — how beached and floating plastic degrades, and gets delivered into coastal waters. All of this research is being done to identify land based solutions to waste management — how do we keep this out of the ocean to begin with. While cleaning up the oceans is a honorable goal, we need to turn the water faucet of plastic pollution delivery off first.