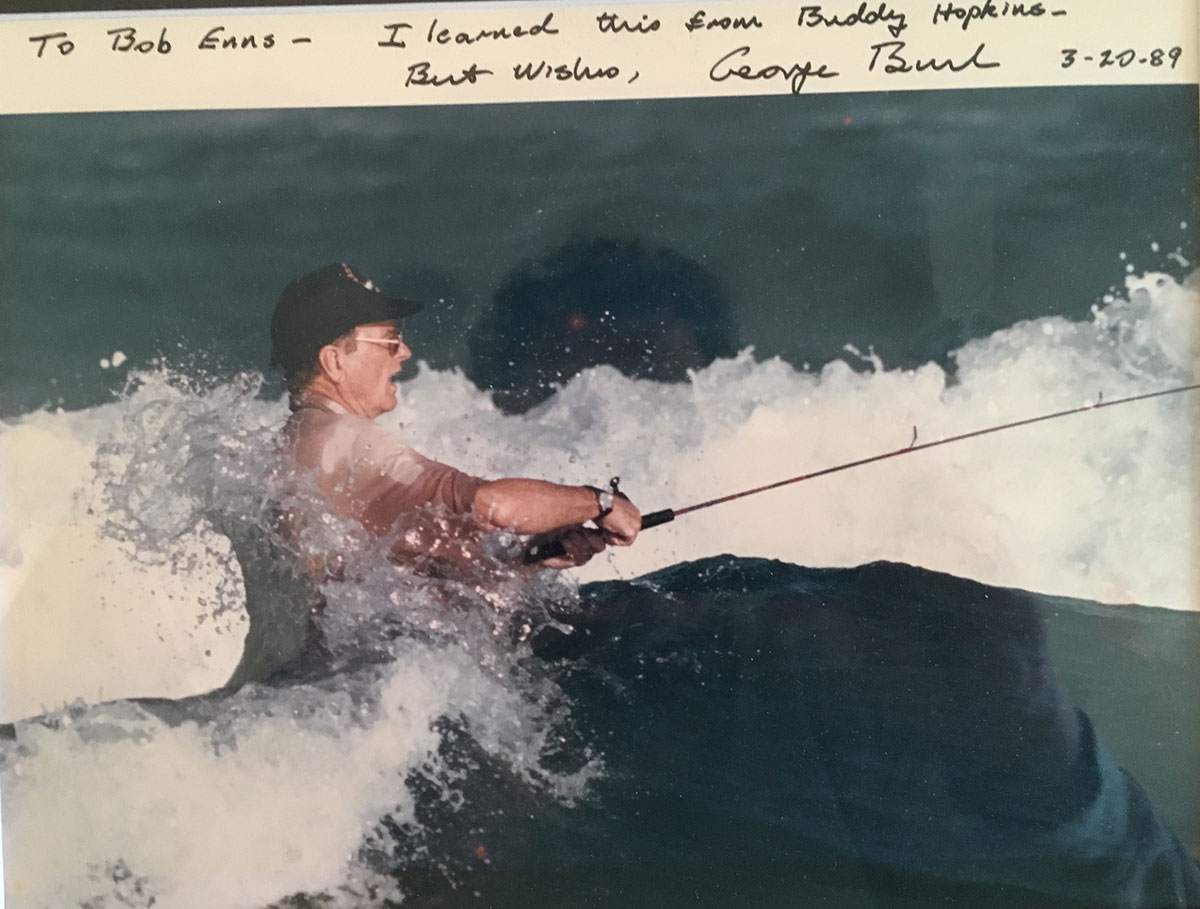 I guess you could say I felt a familial sense of loss with the death Nov. 30 of former President George Herbert Walker Bush. That’s because for a few months back in 1989 my father, Bob Enns, the late Fort Pierce News-Tribune (Fla.) editor, had a correspondence with Bush that resulted in my dad referring to the newly minted president as Cuz Bush — a reference that prompted a personal hand-written letter from the president.

Now for some background.

When Bush was vice president under Ronald Reagan, my dad received a photograph through a mutual friend, W.R. “Buddy’’ Hopkins, who had been my dad’s junior high football coach in the late 1930s. Hopkins, a Fort Pierce native, had been the masseur at the Jupiter Island Club since 1948 and had become personal masseur to George Bush and before that his dad, U.S. Sen. Prescott Bush, who had a winter home on Jupiter Island from the 1960s. Prescott Bush died in 1972 but George Bush made several visits to the island during his presidency to visit his mother — whom Hopkins referred to as Granny — after his presidency until her death in 1992.

“Bobby Enns — Good luck and best wishes, Cuz Bush,’’ my dad interpreted the signed photograph as saying. My dad never displayed the photo during Bush’s vice presidency. But once Bush was elected president he plastered it on the front window of his office in the newsroom.

Did George Bush sign his name as Cuz Bush?

The photo and its prominence raised eyebrows in the newsroom and questions about my dad’s editorial objectivity and prompted him to write a column about how he innocently came upon the photo.

In a Jan. 22, 1989, column headlined “The ‘Cuz’ Bush connection’’ and appearing just two days after Bush’s presidential inauguration, my dad wrote about how he’d reunited with Hopkins several years before through Fort Pierce car dealer Jimmy Sneed and that Hopkins gave my dad the photo signed by Bush on his next trip to Fort Pierce. 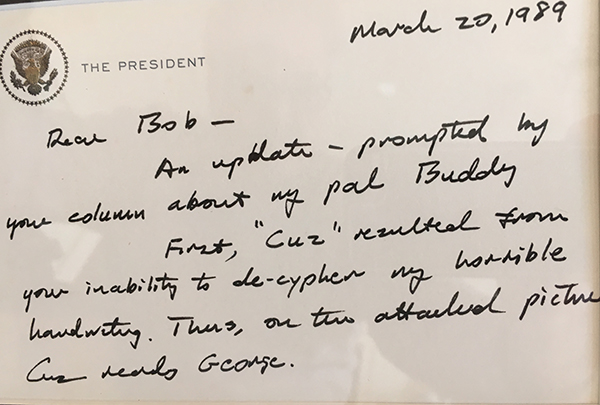 My dad wrote about Buddy’s hardscrabble background — being homeless as a child and living for a time in the old Fort Pierce fire station — and the column revealed how Bush, though from a privileged background, connected with him. Buddy did indeed believe Bush would make the United States a kinder, gentler nation. “He lives up to that in his life,’’ Buddy told my dad of the president. “If he sees someone across the street having trouble, he’ll go over there and help.’’

Buddy also told my dad how Bush flew him up to President Reagan’s inauguration in 1981 and that he had made several trips to Bush’s summer home in Kennebunkport, Maine.

My dad pumped Buddy for other more personal tidbits about the president and was pleased to learn that the president shared his same passions — perhaps even enough to pull my dad over to mainstream Republicanism from the libertarian foundation he’d built for himself in the previous 20 years. 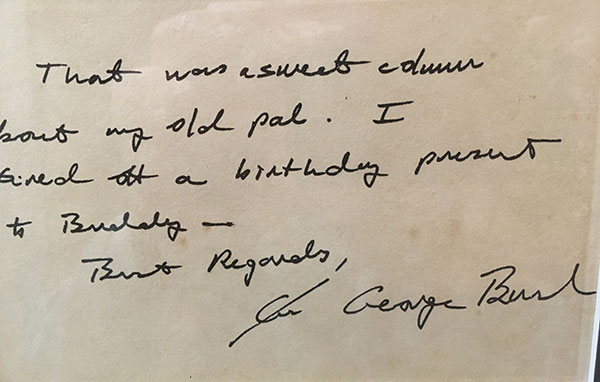 “Buddy’s pretty convincing but I guess I took to 'Cuz' Bush when I found out he likes country music, vodka martinis, quail hunting and fishing the flats off the Florida Keys,’’ my dad wrote. “But understand, I’m still editorially objective.’’

Fast forward about two months later to April 1, 1989. My dad is in the hospital, preparing to undergo the second of three operations in his battle with cancer. Then arrives a large brown envelope with a return address from The White House. “Personal,’’ it says.

Someone from the office dutifully brings it to him at the hospital. Inside the envelope is another photograph of Bush and this hand-written letter:

An update — prompted by your column about my pal Buddy.

First, “Cuz’’ resulted from your inability to de-cypher my horrible handwriting. Thus, on the attached picture Cuz reads George.

That was a sweet column about my old pal. I fired a birthday present to Buddy.

Then the president signed the letter similar to the Cuz signature but beside it more carefully wrote out his name George.

He also enclosed a photo of him surf fishing off Jupiter Island that read: To Bob Enns, I learned this from Buddy Hopkins. Best wishes, George Bush

George was more carefully written out and didn’t resemble the Cuz signature.

The missive from the President for several months raised the spirits of my dad, who would lose his battle to cancer 18 months later. He boasted about the letter in a column on nicknames written a few months after he had received it.

“Speaking of nicknames,’’ my dad wrote, “I inadvertently tried to hang one on the president of the United States but it didn’t work.’’

He went on that he was amazed that the president took the time to write a small-town columnist. “I like to think Bush is working on his pledge to bring us a kinder, gentler nation.’’ 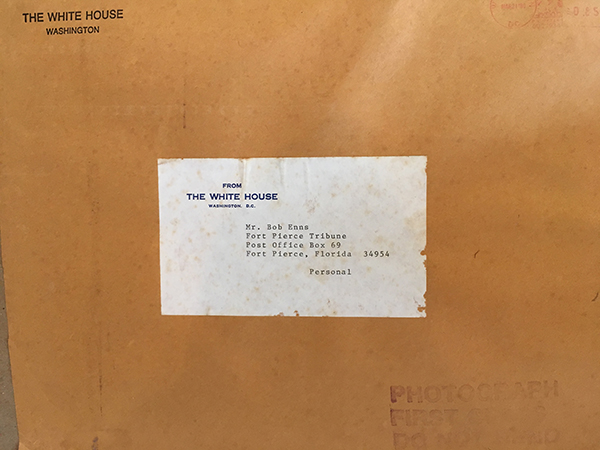 I guess because I followed my dad in the newspaper business the letter from the president wound up with me. But I never had my dad’s columns — I’d even gotten friends at Treasure Coast Newspaper to help me locate them. I had assumed that my mom’s collection of them had been destroyed in the 2004 hurricanes, but luckily she located them the day the president was buried.

Even before all the encomiums in the last week about President Bush, I knew he was a prolific letter writer, often devoting part of each day to writing personal notes even during his presidency. And I’ve watched enough episodes of “Antiques Roadshow’’ to know that prolific and plentiful don’t equate to priceless. 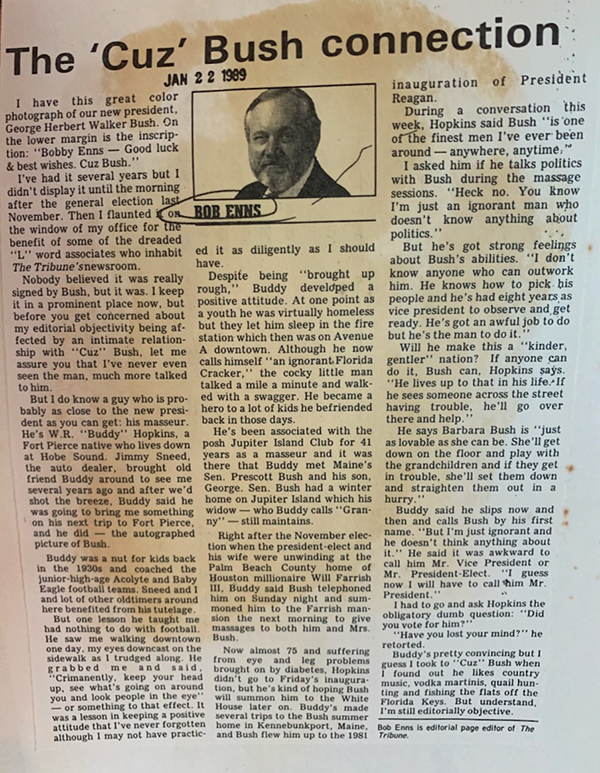 This column appearing in the Fort Pierce News Tribune on Jan. 22, 1989, prompted a hand-written letter to its author from President George H.W. Bush.

But I like the sentimental value my missive holds. It makes me recall how the highest officer in our land kept and continued to nurture his longtime friendship with a simple masseur and then provided a gesture that made a man dying of cancer feel a little better about the world he was losing.

Gregory Enns is publisher and editor of Indian River Magazine on the Treasure Coast of Florida.