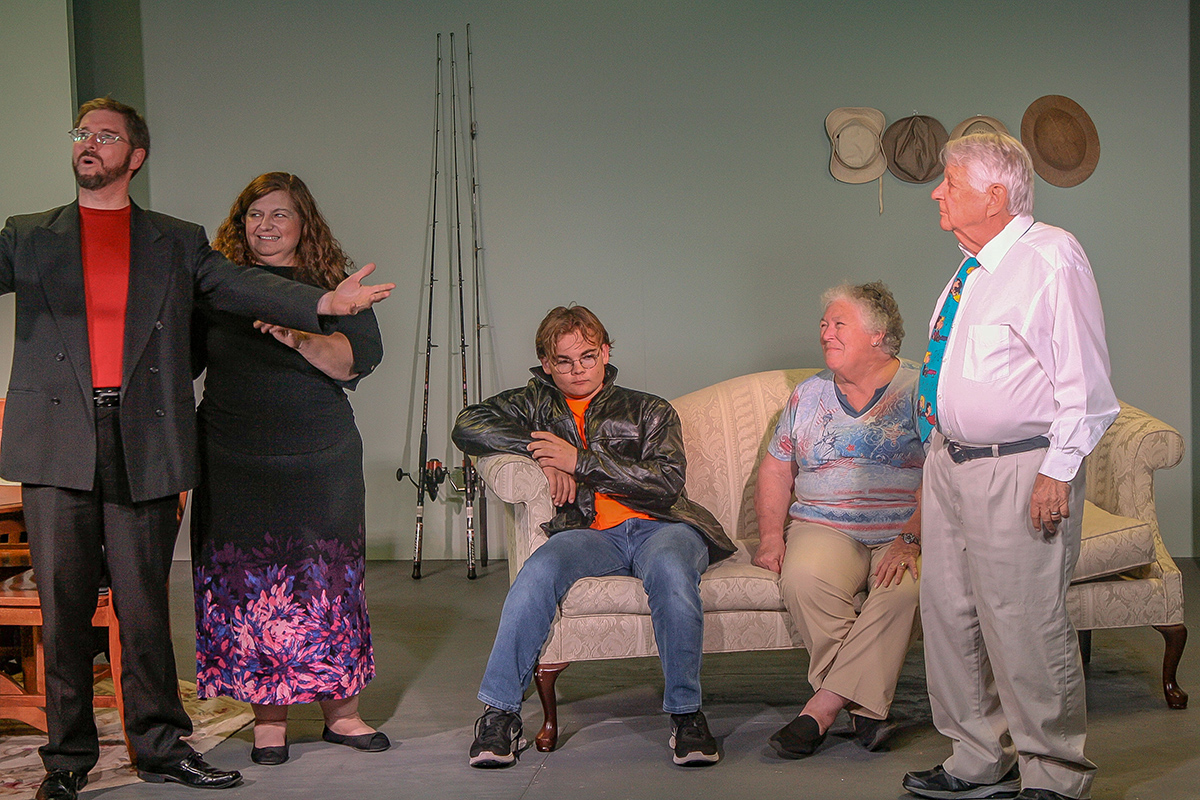 After rehearsing in condo living rooms and other spaces while necessary renovations were completed, the cast of Treasure Coast Theatre’s first production, On Golden Pond, was thrilled to finally be on the stage. From left are actors David Eales, Rosemary Knight, Evan Blake, Jennifer Gregory and Don Matlin.

Rosemary Knight and Dawn Achin are two local women sharing a passion for theater who would just as soon prove Hirsch wrong. And also, prove him right. Together they have formed the only community theater in the city of Port St. Lucie — Treasure Coast Theatre.

“Our goal is to be a profitable theater, to bring quality theater to Port St. Lucie, to provide an outlet for kids and to promote the arts,” says Knight. “On a personal level, too, it gives us the ability to express ourselves with a privately-owned company, with no board to report to. It’s simpler this way, and the drama stays on the stage. We want to produce a quality product and sometimes, ‘too many cooks in the kitchen can spoil the broth,’ as they say.”

Achin agrees. “We want to make sure that our vision is set on the right track, that we maintain creative control.” While they are not averse to eventually welcoming small investors, for now they are focusing on getting established. “Depending on performance and rehearsal schedules, we may rent space to other groups or help local charities raise funds.”

Knight grew up in New York. A “theater geek” since she was 13, she had planned to major in theater but switched college majors to provide more financial stability. She graduated from Fordham University with a minor in theater, going on to get her Master of Business Administration degree from Columbia University, in marketing management. Her business background includes executive positions at various banks and running the family business with her husband, David, who operates the Fort Pierce Lady and Lady Stuart charter fishing boats.

“He knew fishing; I knew business,” Knight says of the move to Florida. With a growing family, and desiring better weather, they migrated without a plan or job. After liquidating their northern properties, they invested the seed money in a floundering charter business. The Knights not only turned the business around but were able to expand it.

Although Knight had been active with several amateur and semi-professional groups in New York and Boston, she waited a few years before getting involved with local theater in Florida. It was only after she took her kids to the Barn Theatre’s children’s camp in Stuart that she decided to audition for a part in an upcoming play. She also became active with Pineapple Playhouse in Fort Pierce.

Achin was in the first graduating class at Port St. Lucie High School, primarily part of the music program. Back then, Pineapple Playhouse operated as St. Lucie Community Theater; Achin volunteered backstage, did stage managing and worked on assistant directing during high school. After graduation, her job had her on-call every day. “I was away from theater for a number of years until I reconnected with my friend, Melissa Hardy.” A gifted actor herself, Hardy encouraged her to become more active with the Pineapple. “I get on stage occasionally,” says Achin, “but I prefer production.”

Both Knight and Achin have a long history with Pineapple Playhouse, in aspects of acting, directing, volunteering and serving on the board of directors. Both are past presidents, in fact, but both also saw the need for a venue in Port St. Lucie. “Some people don’t want to make the drive to Fort Pierce, or down to Stuart,” says Achin. A theater in Port St. Lucie is also convenient for aspiring local actors.

Achin says that a lot of community theater enthusiasts may think about opening their own venues but wonder if they could find someone “just as crazy.” She and Knight agree that fulfilling their shared dream has definitely had elements of craziness.

Finding suitable commercial real estate was the biggest challenge. Spaces were too big or too small, or the right size but with too many barriers. Ironically, the first space they’d looked at was the one they settled on. In the Town Center Plaza, at 10175 U.S. 1, little demolition was necessary before beginning renovations. Parking will never be a problem. Although there are businesses on either side, they will be closed during performances.

The downside was that the bathrooms were not ADA — Americans with Disabilities Act — compliant, a costly venture. There were also red tape delays and permitting issues. Rehearsals for their first show, and auditions for their second, had to be held off-site while workers got the theater ready.

Nothing, however, dimmed their enthusiasm. Achin says years ago, she heard an actor cast for a role in another production remark, “I needed this for my soul.” Achin notes, “That sums up exactly what Rosemary and I feel about theater. I love how all the cogs in the wheel fit together as actors, directors and crew work on a production.”

Theater seats were purchased from a church and put in storage. They had an opportunity to buy old-fashioned lights but decided against them for several reasons. “We want to be as high-tech as possible, so we went with newer LED technology,” explains Knight. “We use a sound board also, rather than larger equipment requiring a separate sound room.”

Treasure Coast Theatre is not a non-profit organization, as some community theaters are. It is an intimate space, with 55 to 58 seats depending on the configuration, giving every patron an excellent view of the action on the generously sized stage. Ticket pricing is average for the Treasure Coast at $20. Because the emphasis is on performance, limited concessions are offered.

ADA compliancy makes Treasure Coast Theatre unique. While other area theaters were grandfathered in to new guidelines, Achin says they’re probably the only theater around that meets current rules. The theater will have four ADA spaces for wheelchair access as well as two compliant restrooms, giving them the opportunity to rent space out to groups needing such accommodations.

Having conquered some formidable challenges already, Knight and Achin are aware of more challenges ahead. Knight says, “Being new, we haven’t built a base of support with patrons and volunteers, but having been involved in local theater for the last 15 years, we hope to draw from those relationships and appreciate the encouragement we’ve gotten. Since we announced ourselves, the response has been good — we already have directors, stage managers and some actors for the upcoming season.”

The two are also excited about offering a children’s summer camp for kids grades 4 through 10, covering every aspect of theater and taught by certified theater instructors. While Summer 2019 might be too soon, they are keeping their options open.

Treasure Coast Theatre’s first performance was held in their renovated space April 26-May 12. Directed by Achin, On Golden Pond starred well-known local actor Don Matlin in the lead role, accompanied by Jennifer Gregory, Brian Pecci, Evan Blake, David Eales and … Rosemary Knight. “I like both acting and production,” she says.

Because of unanticipated and unavoidable delays, much still needed to be accomplished in the very hours prior to an opening night that was virtually sold out, but it all came together beautifully. Treasure Coast Theatre’s debut performance was poignant, understated, and well-cast, a fine “first” for Port St. Lucie’s only live theater venue.