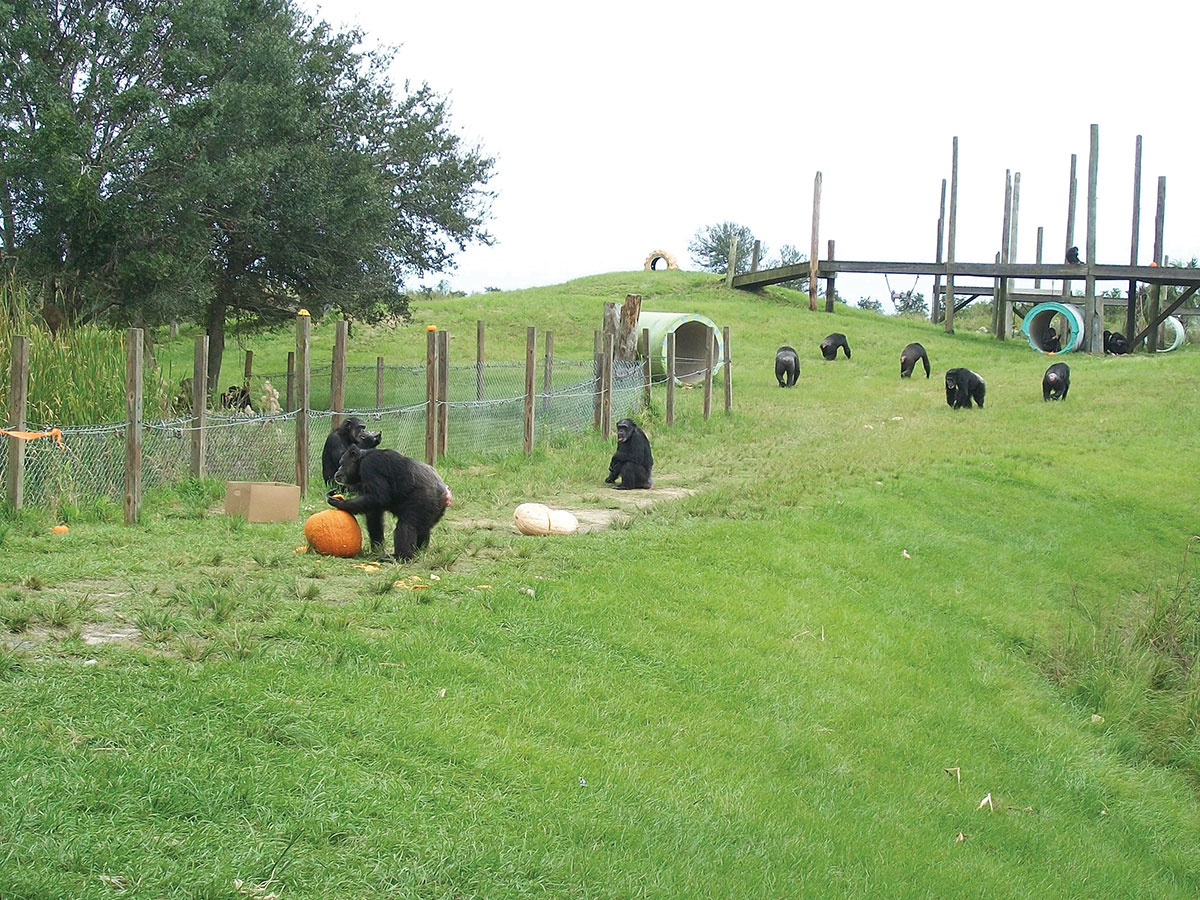 Some of the chimpanzees check out the pumpkins volunteers distributed on the 12 islands at the sanctuary west of Fort Pierce. SAVE THE CHIMPS PHOTO

By 8 most mornings at the biggest chimpanzee sanctuary in the world, the fog has burned off the moats surrounding the 12 islands — home to 254 chimpanzees. As caregivers serve breakfast, Dr. Jocelyn Bezner begins morning rounds, starting with Lou’s Island and its family of 19.

Most of the residents at Save the Chimps just west of Fort Pierce were rescued from the Coulston Foundation, a biomedical research lab in Alamogordo, N.M. Notorious for its repeated violations of the Animal Welfare Act, the lab closed in 2001. At the same time, Carole Noon created Save the Chimps Sanctuary for the 21 Air Force chimps for whom she’d gained custody.

Soon after, she bought the failing Coulston Foundation and its 266 chimps were donated to Save the Chimps. During the next 10 years, Noon and her staff rehabilitated the chimpanzees and brought them by custom trailer to the sanctuary.

Other rescued chimps come from the entertainment industry, private homes and unaccredited facilities. Bezner says there are approximately 850 more chimps in the U.S. in need of rescue.

LANGUAGE LESSONS
All the chimps have a story to tell and Bezner knows how to listen. Sharing 97 percent of the same DNA, humans and chimpanzees are a lot alike: communicative, sociable creatures. Originally a dog and cat veterinarian outside Chicago, Bezner never expected to work with primates. But, she understands their language and calls this the most satisfying work of her life. Bezner loves the chimps and clearly, they love her back.

The instant Bezner glides up to the chimp house in her golf cart, a chimpanzee runs to her like a 3-year-old on Christmas morning.

A metal fence separates Bezner and the chimps. Neither she nor any staff touches a chimpanzee unless the chimp is thoroughly sedated. But, that metal barrier doesn’t prevent Bezner from getting personal.

RIGHT SIGNS
Like right now, as Arthur, an 18-year-old male, goes through his pantomime of greetings. First, Arthur pats his tummy. At a glance, he could be a large stuffed toy. But, Arthur is seven times stronger than a human male.

All he wants is Dr. B’s undivided attention. When patting his tummy gets no reaction, Arthur makes his famous noisy kisses.

“We call those raspberries,” Bezner says.

Next, he wags his head, then sticks an index finger through the fence, pointing down. He watches and waits.

“That means ‘Come here,’ ” Bezner says with a laugh. She continues checking her to-do list until he’s settled down, then walks over to him. “Are you a handsome boy?”

Arthur jumps like a child on a trampoline and Bezner squats in front of him.

“I just want to scratch your tummy,” she says, making goochy-goochy gestures with her hands.

ROUGH BEGINNING
Arthur was born in the Coulston lab. When the lab lost its government funding, its owner, Fred Coulston, sold the youngest chimpanzees to various entertainment businesses. When Arthur was 2 years old, the Lowell Spinners, a minor league affiliate of the Boston Red Sox, bought him as a mascot, housing him in a substandard roadside animal park in New Hampshire.

“They trained him to do tricks for fans. Patting his tummy, the kisses, it’s all learned behavior. We don’t stop him but it’s not what chimps do in the wild,” Bezner says. “This is a sanctuary for chimpanzees who haven’t had normal lives. That’s what we give them — a chance to live a normal life.”

Bezner explains that while baby chimps are manageable, they quickly become too strong to control.

“That’s when people sell them to research labs or beat them into submission,” she says.

Happily, Arthur was rescued and brought to the sanctuary. Even though he shows zero interest in breakfast, preferring to hang with Dr. B, the others are coming in from the grassy island. They know what time it is and they love to eat. Inside, Dante Roberts, a caregiver, drops oranges into the food boxes attached to the outsides of the cages — easy for the chimps to reach. He feeds the lower-status chimpanzees first while the dominant ones wait politely.

“If you feed the dominant male chimps first, they won’t let the others eat. But they don’t mind waiting while the females and lower-status males eat first. It’s counterintuitive,” Bezner says.

Now Arthur nimbly rounds the corner, coming inside. Bezner warns the visitor accompanying her to stay close. She’s already told her to bring a change of clothes in case a chimp throws something (think feces).

While the visitor watches Tinker enjoying an orange, Arthur nails her with a long jet of water right between the eyes. No worries. It’s just water and the humans all wear facemasks.

“It’s more to protect them from our germs than vice versa,” Bezner says.

All in all, Arthur will squirt the visitor three more times, hiding to get her with deadeye aim. It’s his way of saying, “Hello, wanna play?”

Standing just 5 feet 1 inch, Bezner, 59, is petite and girlish with a ponytail and the smile of a beauty queen. Simultaneously friendly and no-nonsense, she’s focused on the welfare of the chimps.

“Since they come in to eat three times a day, I have three opportunities to observe them. If one has a boo-boo, they’ll either come up and show me or hide it. Usually, others are grooming him or her. Then I see what’s up,” Bezner says.

The chimps take most of their medicines orally, mixed up with their favorite beverage — orange juice. When that dosage isn’t enough, they’ll get an injection — just like humans.

Yesterday, Bezner removed Adina’s infected incisor. So Adina won’t go outside for a few days. That’s OK because her special, closest friends are staying in with her.

“I keep them inside as little as possible, but, they can have a few friends with them unless it’s very serious. Chimps should never be alone.”

Now Bezner hands Adina a bottle of orange juice with medicine mixed in. As Adina drinks, tipping back her head, Bezner checks the incision.

Moving on to Doug’s Island, Bezner wants to check Billy’s wrist. The chimpanzee experienced a trauma yesterday. Bezner asks caregiver Billie Jo Sessions, a longtime employee at the sanctuary, what she observed while serving Billy breakfast this morning. Yes, the chimp’s wrist is still swollen, but appears to be healing nicely.

When Billy ambles over, Bezner hands him a banana.

“Billy, show me your wrist,” says Bezner, and Billy holds it up for her.

“It was much more swollen yesterday,” Bezner says. She points to a bite mark on the wrist bone. “He’s taking oral antibiotics.”

Ask Bezner what her biggest challenge is and she’ll answer, “Understanding what’s wrong when I can’t touch them.”

“Their most common health problems are heart disease, hypertension, arthritis and trauma, very similar to us,” Bezner says.

HAPPY ENDING
Her greatest joy is watching them get healthy and confident. If they’ve been rescued from a laboratory research facility, they’ve endured years of surgeries and extreme loneliness.

That’s Bobby’s story. Born at the Coulston Foundation, Jan. 31, 1983, Bobby was taken from his mother when he was 22 hours old. He was almost 2 when he went into the grinder of medical testing. During his lifetime, he’s been a subject in eight different research projects — anesthetized more than 250 times for blood work and at least 34 separate liver-biopsies.

The agony took its toll. To relieve the stress, Bobby bit himself repeatedly on the arm causing serious wounds.

“Bobby’s great!” Bezner says with emotion. “He’s happy, using his arm normally, loved by his family and all his caregivers and yes, a bit spoiled — deservedly so.”

Of all the chimpanzees, Bezner considers Bobby’s good health her greatest single achievement. There’s only one piece of paper on Bezner’s office fridge — a photo of Bobby.

A graduate of Temple University and the University of Pennsylvania School of Veterinary Medicine, Bezner graduated in 1986 and worked in New York and Chicago.

In 2002, when a client didn’t keep an appointment, Bezner had a free moment.

“I flipped open the current issue of Journal of the American Veterinary Medical Association and scanned the job listings. The posting said ‘must be willing to relocate.’ ”

Always drawn to new adventures, Bezner flew down for an interview and accepted the job immediately.

“I split my time between the New Mexico facility and the Florida sanctuary until we hired a second vet in 2008,” says Bezner, who calls this the best job in the world.

“It’s the best because I have personally known over 300 chimpanzees in my life,” she says. “They are funny, fascinating, complicated and challenging. They’re a good example of how to live — express yourself freely, forgive the past, resolve your differences quickly, don’t hold grudges and live in the present. They eat every fruit as though it was the best they ever had and they accept death as part of life.”