Mike Adams spends $250,000 every year to manage Brazilian peppertrees spread over the family’s 40,000 acres of ranches in Osceola and St. Lucie counties, where his family has developed the Braford breed of cattle. Adams, whose family ranch was founded in 1937, recounts years when the invasive tree from South America overtook natural areas on the ranches, pushing out pasture and grasslands. 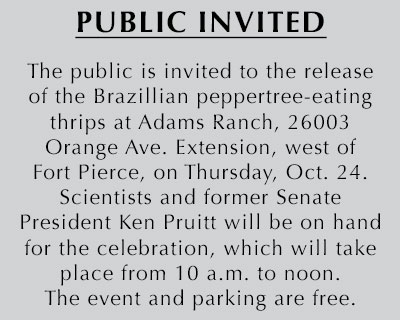 But a tiny winged insect about the size of an ant is about to become a game changer for Adams Ranch and perhaps Florida. Scientists from the University of Florida Institute of Food and Agricultural Sciences in Fort Pierce will release the first biological control insect, the Brazilian peppertree thrips, or Pseudophilothrips ichini, against the problematic tree at Adams Ranch on Thursday, Oct. 24.

The first release of thrips was made at a park in Broward County over the summer, and the release at Adams Ranch will be one of the first on private property.

“It’s going to be a win-win for us and the environment,” said Adams. “The university’s biocontrol program will help us to protect our natural areas, help our cattle to have more grass, and we won’t have to apply chemicals to trees anymore.”

The thrips have been researched for more than a decade at the University of Florida’s Norman C. Hayslip Biological Control Research and Containment Laboratory, 13 miles east of Adams Ranch near Fort Pierce. The lab, completed in 2004, is located at the UF/IFAS Indian River Research and Education Center.

Adams said his family members have had to manage Brazilian peppertree for more than 80 years. The tree is the state’s most serious invasive weed, which costs the Florida Fish and Wildlife Conservation Commission and the South Florida Water Management District over $4.7 million every year to control. Today, more than 700,000 of Florida’s natural areas, ranchlands and highway roadsides are consumed by the trees. The densest infestations are in the Florida Everglades, according to Dr. Ronald Cave, director of IRREC.

“University of Florida researchers work as a team to study and gain approval for the release of specialized insects that will manage the invasive Brazilian peppertree,” said Cave. “Over time, the thrips, in addition to three more insects that will be released to reduce Brazilian peppertree, will decrease the need for land managers and ranch owners to use heavy machines and toxic chemicals to remove the invasive tree.”

Cave said the first Brazilian peppertree was introduced to Florida more than a century ago as an ornamental holiday plant. “At Christmastime, they put out bright red berries,’’ he said. “Some people call them Christmas berries.’’

Because they are a favorite food of several species of birds, the plants spread rapidly. The berries are actually edible and eaten in Brazil, he said. Brazilian peppertrees grow much smaller in Brazil because the plant has more insect predators.

Cave said scientists more than a decade ago discovered the thrips in Brazil feeding on the peppertrees.

The thrips were brought back to the lab in Fort Pierce, where scientists began raising colonies of them. The thrips are kept inside rooms in a greenhouse like setting where light, humidity and temperature are controlled. They feed on potted Brazilian pepper trees. Scientists will gather about 1,500 of them in vials for the release at Thursday at Adams Ranch.

Choosing Adams Ranch for the release was a natural for UF. Both ranch founder Alto Lee Adams Sr. and son Alto Lee “Bud’’ Adams Jr. were University of Florida graduates, as is Mike Adams, Bud’s son. Bud Adams was also a naturalist and pioneering cattleman who developed the Braford breed of cattle.

Cave said extensive research has been conducted at the Fort Pierce lab to determine that the thrips will only eat Brazilian peppertrees and will not eat other species of beneficial trees. Because the thrips, considered natural enemies of the Brazilian peppertree, can fly they can spread to other areas and colonize.

Cave said the thrips work slowly and may take several years to make a dent. “It’s not a quick fix. It’s a longterm project.’’

“We cannot eradicate the plant — that’s not the expectation. Natural enemies will not be able to reduce that. All they can do is significantly reduce the population of the plant so that there’s a lot fewer Brazillian peppertrees. They can knock back a plant so it’s not so bushy, more scrawny and so there are far fewer trees.’’

Carey Minteer, assistant professor and invasive plant research leader at the UF/IFAS Hayslip Lab, said Brazilian peppertrees disrupt the ecosystem by outcompeting our native plants and reducing habitat for native wildlife. Minteer works with the Brazilian peppertree thrips and with a second biocontrol insect, the yellow Brazilian peppertree leaf galler, or Calophya latiforceps. The leaf galler, also raised at the Fort Pierce lab, gained approval for distribution as well and will be mass-reared for release at a later time.

“The biological control agents approved for release have been under study for over a decade and were deemed safe by federal and state scientific authorities. These insects feed and reproduce only on Brazilian peppertree,” Minteer said. Officials with the U.S. Department of Agriculture (USDA) and Animal and Plant Health Inspection Service, or APHIS, ensure insect biocontrols are safe to release.

Work at the local UF/IFAS facility began over 17 years ago, but preliminary research began in the late 1980s, by now-retired UF/IFAS entomology and nematology professors, Frederick “Fred” Bennett and the late Dale Habeck. Bennett and Habeck’s tasks were overseas exploration, or searches for insects that feed on Brazilian peppertree in its native range in South America.

“The tree is much smaller in its natural habitat and does not reproduce as it does in the U.S,” said Jim Cuda, professor of entomology and nematology and Fulbright Scholar at the UF Gainesville location. Cuda’s entire career, which began as an assistant research professor in 1998, is devoted to the study of Brazilian peppertree.

FLORIDA SUCCESS
“Florida has a long and storied history of weed biological control success stories, beginning with alligator weed in the 1960s,” said Cuda. “Brazilian peppertree will undoubtedly be added to that list.”

Cuda said he has been fortunate to work on the Brazilian peppertree biological control project; he compares the endeavor to a relay race. Research began with Bennett and Habeck, who identified the thrips as a potential biological control agent. Then, Habeck and a new UF/IFAS scientist, Julio Medal, conducted the preliminary screening studies. Cuda and his technician, Judy Gillmore, developed the first mass rearing procedure for the thrips and completed the initial testing.

Scientists at the Hayslip Lab have gained approval for the yellow Brazilian peppertree leaf galler. That insect was discovered in South America in 2010 by former UF/IFAS graduate student, Lindsey Christ, and postdoctoral researcher, Rodrigo Diaz, explains Cuda. “Research on the biology and host range of the leaf galler was completed by Diaz and his mentor, William ‘Bill’ Overholt.”

In the next year, the two insects will be mass-reared at the UF/IFAS Hayslip lab and distributed to land managers who will complete the work to control Brazilian peppertree in Florida, said Minteer.

“It is the willingness of local citizens to take part in the distribution of the biocontrol insects that is vital in the fight to control Brazilian peppertree,’’ Minteer said. “I welcome them to join us at Adams Ranch on Oct. 24.’’