When Dr. Daniel and Marlena Husted doubled the size of their St. Lucie River estate in Stuart, they used design elements inspired by their travels around Europe.

Spanning 10 years, the project included addition of a guest house above the three-car garage and a master wing that doubled the square footage of the home.

The first addition to the original house was the formal dining room, which the couple calls the solarium because of its many windows. Its domed ceiling is reminiscent of a church they visited in Florence. Two artists spent 10 days applying marble shavings into the dome, which has recessed LED lighting. The ornate floral pattern on the walls was also hand painted. Outside, a widow’s walk surrounds the dome allowing spectacular views of the St. Lucie River. A second-floor balcony runs the length of the house.

The exterior roof line with copper and tile is a design from several French chateaus. The French influence can also be seen in the fountains and garden, symmetrically arranged and immaculately manicured in the style of the gardens of Versailles.

Some influences are closer to home. The garden on the side of the home has a reflecting pool — an homage to the one at the National Mall in Washington, D.C.

Marlena Husted’s favorite room is the kitchen. She wanted a large kitchen in which she would be comfortable cooking for her friends and blended family. The couple have seven children from three-year-old twins to college age. Trained in the culinary arts, she wanted it to resemble a restaurant kitchen.

“I love to cook,” says Marlena. “I can interact here with people while I am cooking.”

Quartz countertops give the kitchen a bright feel with its natural light and sweeping views of the river. For large parties, appliances such as a Miele double dishwasher, built-in espresso and coffee machines, ice maker and Gagneau double refrigerator and freezer make the chef’s life easier. Solid wood cabinets have Edgar Berebi nickel drawer pulls.

The covered entryway has stately steps up to a very heavy, arched front door. Inside the foyer an 18th-century wellhead from a village in Italy serves as a container for fresh flowers. The original staircase was replaced with cast stone and wrought iron railings.

Ibiza marble floors are found throughout the main house along with numerous Schonbek crystal chandeliers and sconces.

Looking out from the living room, the vanishing-edge pool seems to blend with the river. Light and airy with floor-to-ceiling windows, the room is large enough for entertaining. A cast stone propane fireplace and Steinway piano add to its appeal as a gathering place.

The infinity pool also has a jacuzzi and sunken fire pit for lounging. Coral from a quarry in the Dominican Republic was used for the pool deck and exterior of the main house.

The new master wing includes a master bedroom, bathroom, his-and-her closets, a library, a nine-seat movie room and a kids room. Roberto Cavalli flooring was installed in most of the master wing.

Daniel Husted was inspired by Jay Gatsby’s two-story closet in the film adaptation of The Great Gatsby. Marlena’s section is downstairs while Daniel climbs an ornate spiral staircase like the one in the movie to his part of the closet.

The master bath has a walk-in Calcutta stone shower, his-and-hers vanities on Michonne Grey limestone counter tops, and a unique Kohler spa tub surrounded by carved limestone. A special car paint was used to get the shiny finish on the cabinets.

The master bedroom has wrap-around river views and doors that lead out onto the back deck. The groin vault ceiling with gold leaf scrolls complements the curves of the wood-burning fireplace. “I’m from California and I like a good wood fire,” says Marlena.

The home that grew with the family of nine is now listed with Community Re/Max for $5.3 million. “In designing this home, we envisioned a stately, classically elegant home, while maintaining a sense of warmth and usability that would be applicable for a large family such as ours,” says Daniel, an orthopedic spine surgeon. But with four children now in college, the couple has decided to downsize. 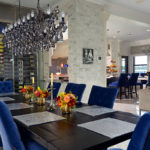 The informal dining room with seating for eight is adjacent to a climate-controlled wine cooler. 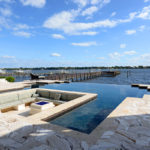 Water just seems to go on forever from the vanishing edge pool, which surrounds a sunken fire pit. 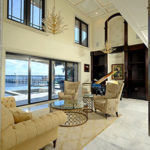 Sliding glass doors open up the great room for easterly breezes off the St. Lucie River 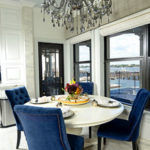 With its wide water views, the breakfast nook is nestled just off the kitchen. 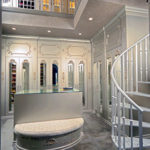 The wife’s closet is downstairs while the husband’s is up the spiral staircase, which also leads to a hallway and private library. 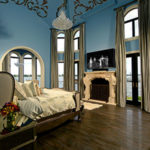 The master bedroom of the Husted estate in Stuart has sweeping views of the St. Lucie River and a wood-burning fireplace. 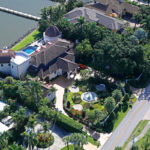 The front garden at the Husted home was designed in the style of a French formal garden. GREG GARDNER 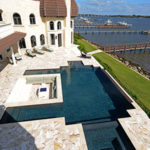 The large infinity pool contains a spa, and also has a sunken fire pit for cool winter nights. The pool area has expansive views of the St. Lucie River.
Please follow and like us: