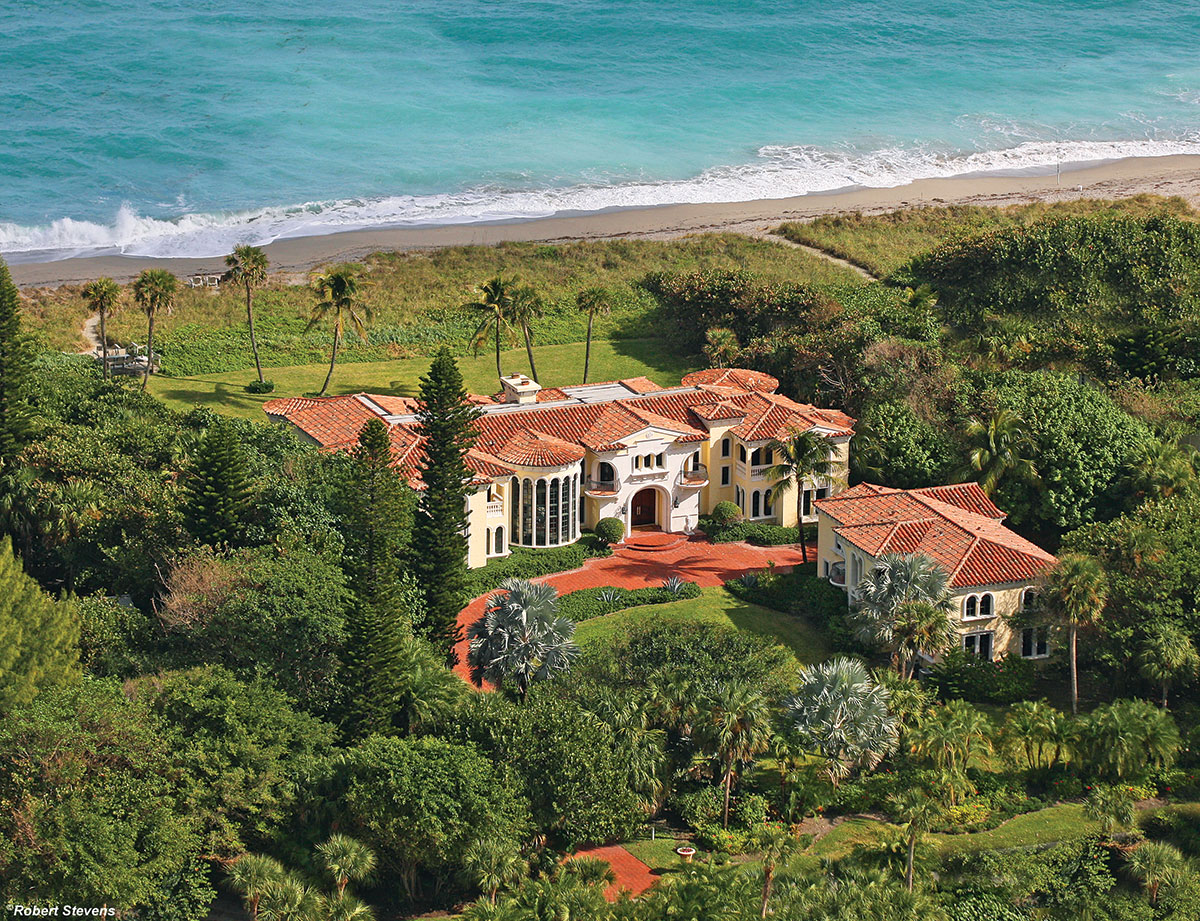 Chateau de la Lune sits on 190 feet of Jupiter Island beachfront with a reef that breaks up waves in the winter and offers great snorkeling in the summer. ROBERT STEVENS PHOTO

House of the moon rises above beachfront property

Town fathers decided that the more than 14,000-square-foot residence, which was built in 2002, was too much house for a 1.5 acre lot and passed stricter development rules to preserve the look of the unique community.

“I had bought the property in 1996 and I always wanted to build this house on it,” Brisben says. “I was keeping my boat in South Florida and I looked around and fell in love with Jupiter Island and its setting and quaintness.”

The estate, whose translation means House of the Moon, is named for the magnificent moonrises above the 190 feet of beachfront visible from large impact resistant windows on the first and second floors.

While many of the homes on the barrier island are deliberately landscaped for seclusion, Brisben preferred to have his estate visible from the road and some residents refer to it as the Vatican.

The Old World Mediterranean architecture of the main home and guesthouse includes nine aesthetically pleasing, yet functional, Juliet balconettes. With a 35-foot height limit in the town, the home’s poured concrete roof – without trusses – allows for spacious ceilings on the inside, while still retaining the French chateau look on the outside.

“We did utilize the lot and every bit of space,” says Bill Watkins, president of Paradigm Architecture Design Inc. “The shell is certainly a superstructure. We maximized interior volume, hiding plumbing and chaseways. We call it the bathtub.”

The columns supporting the home are 60 to 70 feet deep and embedded in bedrock. Fill raised the home by 3 feet to allow for better views over the dunes. Landscaping hides the neighbors’ homes until you get to the dune line.

“A successful project is always a mix of a great owner and a good architect,” Watkins says. “It was enjoyable for us. Bill relied on us. ‘Just come back and wow me,’ he would say. In my 30 years, I haven’t had the opportunity to do this many fun, costly, pricier designs. He was a very quick decision-maker and that expedites the design process. There are a lot of features that make the house true to Old World architecture.”

Two custom marble lions guard the front door, a gift in olden days from the bank to show that the home was free of any encumbrances.

“When you walk in the door, the ocean hits you right in the face,” says Brisben, a real estate developer who has built apartments and homes in 20 states. “I stole the idea from Mar a Lago (Donald Trump’s Palm Beach estate). It’s really spectacular. I wanted a French Mediterranean-style home. We used Mizner precast molds for the exterior columns.”

Architect Addison Mizner’s Spanish Colonial Revival designs are everywhere in Boca Raton and have been copied all over South Florida.

All the heavy wooden doors rounded at the top used French designs and were custom made in Texas. Brisben didn’t think American hardware had the European look he wanted, so he ordered hinges and door handles from a French company.

When you walk in the front door there is a great room with floor-to-ceiling windows. Above is a vaulted gold-leaf ceiling and at your feet are 24-inch by 24-inch Italian marble tiles. Original Louis XIV-era furniture with intricate needlepoint images rest elegantly on a carpet crafted over two years by a Turkish family. Paintings and sculptures from the 19th-century realism period are found throughout the home.

The large kitchen with cherry cabinets and a large island feeds out into a breakfast nook with morning southeast views. On the other side of the great room is a family room with a fireplace that burns either wood or gas. The two ground-floor guest suites have their own bathrooms. Each of the main house bathrooms has a different color marble floor tile from Spain or Italy, green, sand white, Carrara white and gray.

There are four laundry rooms including a shower for Chief, the family’s fox terrier. The climate-controlled wine cellar can hold 2,000 bottles of wine.

The spiral staircase is an artistic masterpiece with a painting curving along the wall, a copy of a work of art that hangs in the Louvre Museum in Paris. A smaller person can take a comfortable stride on the inside of the stairs while a taller person can easily take the outside stairs. Two people can easily traverse the stairs together.

Just off the kitchen is the elevator, dumbwaiter and a separate staircase to the second floor bar, which has paintings depicting the story of winemaking. In keeping with European tradition, the dining room is on the second floor. A butler’s pantry stands ready to serve up to 14 people in the dining room. Outside is the rotunda covered porch perfect for an after dinner cigar.

The master bathroom has a Rojo Alicante marble floor from Spain. In a remarkable display of craftsmanship, veins in the marble match perfectly with the seams of the shower. A four-post bed with a canopy has the best view in the house.

Brisben’s office is in the African motif with more than 40 tribal masks watching over him. While he was a U.S. representative to the United Nations International Children’s Emergency Fund for seven years, Brisben made many trips to the continent. “Africa is close to my heart, its people and its children,” he says.

“Other than my family, it was the greatest experience of my life,” says Brisben, who took the UNICEF position, but donated his salary. “We were able to make significant differences in the lives of the world’s children. The AIDS relief to Africa and the Caribbean was the biggest humanitarian effort since World War II, saving tens of millions of lives. We made major milestones in changing the HIV scene in Africa and the Caribbean.”

Brisben went to the mines in Italy to choose the different marbles. He also traveled to France to select artwork and antiques for the home. Although detached, the guesthouse/garage appears connected to the main house from the street.

That’s a lot of house to run in a time when many members of his generation are looking to downsize. “I want to move to the south end of the island,” Brisben says. “I have two other houses and at this point less is more. I no longer need a 14,000-square-foot house.”

For those interested, Chateau de la Lune is listed for sale at $12.5 million by Drew Ciraldo and Dayna Woods with Fenton Lang Bruner & Associates.