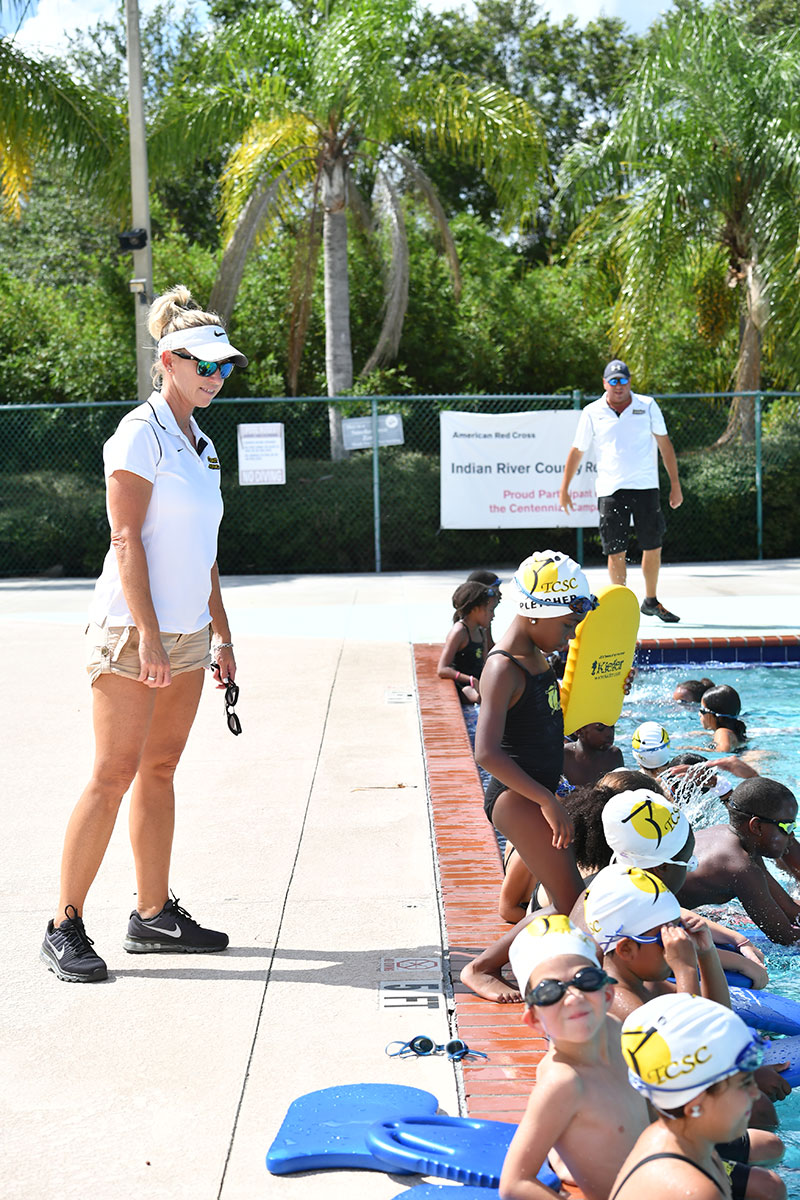 Imagine that feeling of bursting up through the water to see sunshine dancing on ocean waves or a pool’s glimmering aqua surface. But what if water evoked feelings of trepidation and danger even as others were enjoying its buoyant and refreshing attributes?

In Florida, swimsuits are an acceptable form of dress while shopping; boat shoes are de rigueur at most cocktail receptions and business deals are transacted on boats, kayaks and paddleboards.

A reckless teen driver, under the influence, hit Powers’ son, William, when he was only 10 years old. He suffered a broken right tibia, severed left femur and a significant brain injury. He was in a coma for four days and awoke surrounded by his family who thought he might not make it. Everyone knew it would take a lot of work to get Will back to where he was before the accident, if that was even possible.

SWIMMING AIDS RECOVERY
For some, this might have been the point where they gave up, but not for Will, and not for his father who passed on his intense drive to his equally determined son. Powers, who was a swimmer growing up in Larchmont, N.Y., knew the benefits of swimming, but did not know that it would take Will to great heights one day.

“Will was not a swimmer before, he was in lacrosse and football but after the accident he could only be in noncontact sports,” Powers said.

What began as physical therapy continued when he was able to return to school. He trained to run track and compete with the Badger Swim Club, the same team his father belonged to when he was a youngster.

“William was always a very determined, hardworking kid and swimming requires tremendous commitment,” Powers said. “Within a short number of years, he had gone from swimming with toddlers to being a nationally ranked swimmer. It was great for his health as well as for his discipline, drive and determination … he put his all into it.”

This year, William attended Georgetown University as a member of its swim team. It was a long, but very worthwhile struggle for the young athlete who never gave up.

FOCUSES ON GIVING BACK
Powers recognized that his son overcame his obstacles, not only because of his intense determination, but also because he had parents who could afford to give him what he needed to achieve success.

“I was very lucky in my business career, and retired in 2012 — since then we have focused on giving back,” Powers explained.

When the family used to come to Vero Beach on breaks, Will would swim under local coach Scott Barlow. Barlow and Powers became quick friends and worked to form the Treasure Coast Swim Club under the instruction of Barlow and co-coach Holly McClain.

Powers asked Barlow if there were children on the Treasure Coast who would benefit from swimming but who could not financially afford it, and the answer was a definitive yes. At first, Powers gave scholarships to two or three children to register them with USA Swimming as well as supply their swim gear. Once he began contacting groups like Boys & Girls Club and the Gifford Youth Achievement Center, he saw a great, unfulfilled need and decided to form an agency that could help in a more significant way.

Powers filed 501C3 paperwork as Float Hopes of Indian River County Inc. and the project took off. His dream was to take students in the young, formative years and give them swimming skills to use throughout their lives. From just a few students, he has gone on to fund children from the Boys & Girls Club of Sebastian, Fellsmere and Vero Beach, as well as the Gifford Youth Achievement Center, serving more than 102 children.

HIGHEST RATE OF DROWNINGS
According to the World Health Organization, more than 40 people lose their lives to drowning per day with more than 90 percent of those in low- and middle-income families. Knowing how to swim is an absolute necessity in a state surrounded by water. Florida has the highest rate of drownings in the country, second highest in the 1- to 14-year-old age group.

Fear may not be hereditary but it is passed down from one generation to the next — especially when it comes to swimming. This is especially true in African-American and financially strapped households since pool fees, equipment and swimming lessons are usually not in the budget.

“Historically, African-American students do not swim,” said Angelia Perry, executive director of the Gifford Youth Achievement Center, an after-school education center with a predominantly lower- income, racially diverse student base. “Their parents did not learn to swim, so their children tend to not swim as well.”

Non-swimming parents reinforce that water is dangerous and swimming is not a family activity.

“It frightened me because my girls wanted to swim and I didn’t know how,” said Sandra Jackson, mother of two in the GYAC Float Hopes program. “We would go walking at the beach and I would get afraid if they would go near the water. Now, Trinity is like a dolphin. She even saw some swimmers on television and told me that she might like to compete in the Olympics. This is setting the stage for her to do well in her future.”

MORE THAN A CLASS
To make it very clear, Float Hopes is not a swim class but a program designed to get students registered with USA Swimming, pay for equipment, pool fees and coaching. There is some initial instruction in basic swimming but because the children begin so young, they seem to pick up the swim part naturally. From nervous hand-over-hand creeping along the pool’s edge they are soon doing back-flips and flip turns.

“These kids are starting at ground zero, but it is our mission to extract as much potential as we can,” said Barlow. “Some will just be happy to be on a swim team and come to practice but we are hoping others will gain full benefit of what the sport can give them.”

And because of Title lX, a law that requires schools to designate equal funding to women’s scholarships as men’s, women-dominated sports scholarships are more readily available. Powers is not just offering the children a sport which teaches them discipline, team bonding gives them confidence and a sense of self-worth. Swimming also offers a possible way out of poverty through scholarships to schools that they normally could not afford or even consider.

“Jeff has really been the grand marshal of making this happen and bringing all entities together,” said McClain. He’s done a spectacular job of coordinating the whole thing — funding, meetings and getting things together and also in firing people up and getting them excited about the program.”

Powers doesn’t care about the accolades, his mission is to get children in the water so they can have the same life-improving benefits as his son.

“We, as an organization, are trying to take kids, some of whom have faced great adversity, many who are from single parent homes, and what they all share is a lack of resources to be able to swim,” said Powers. “We are giving those kids a chance so by the time they go to high school they are able to walk into school as a student athlete; they know who they are; are proud of themselves, and have a sense of confidence that they wouldn’t have otherwise.”

If you would like to learn more about the program, go to www.FloatHopeNow.org to consider supporting this program or to see how to get involved.