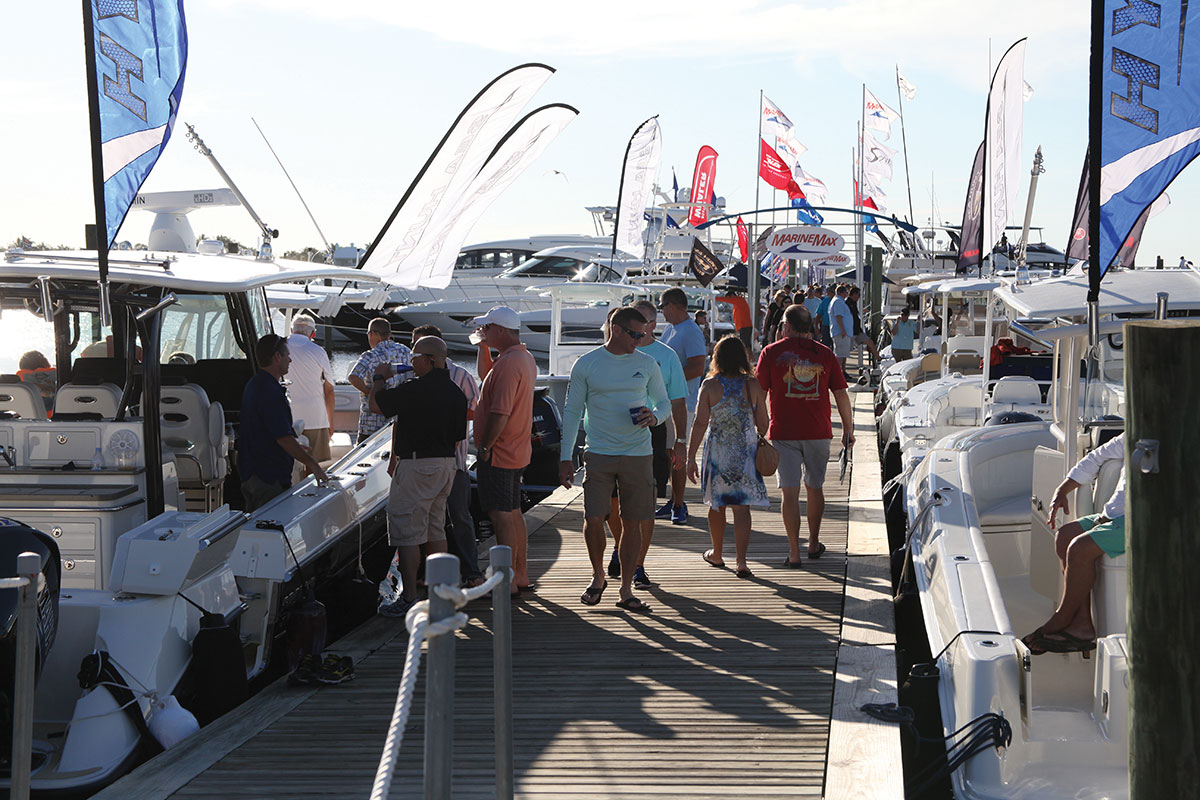 The 2016 Stuart Boat Show offers ample opportunity to come aboard vessels of all makes and sizes. GREG GARDNER PHOTO

Boat shows and fishing tournaments bring a huge economic impact to the Treasure Coast, but a much larger benefit is the growth of appreciation for the marine environment.

“With tournaments comes environmental awareness and safe practices for the fishermen and the fish species,” says April Price, president of Marine Industries Association of the Treasure Coast. “A lot of people love to compete and tournaments give them the opportunity to have fun. It keeps people engaged and it brings new people to the area, the industry and the sport. We want people to go boating, go to the bait and tackle stores and use the resource.”

Conservation of fish stock during tournaments goes back to the 1940s when the Stuart Sailfish Club began using catch-and-release rules. “We want to keep our fishing healthy,” Price says. “It shows how long people have been looking at sustainability.”

The economic impact of almost three dozen fishing tournaments annually on the Treasure Coast is hard to gauge, but events such as the two Southern Kingfish Association tournaments this year in Fort Pierce will bring scores of anglers, who will stay in area hotels and spend money on food, fuel and bait.

Boats and marine merchandise are purchased during regional boat shows, which attract tens of thousands of people. A major fundraiser for the MIATC, the Stuart Boat Show, is a fine-tuned operation on the north side of the old Roosevelt Bridge.

“What is special about the Stuart Boat Show is its consumer-friendly atmosphere,” Price says. “People come here after they’ve been to the Fort Lauderdale Boat Show and find it easy to get to. There is more time to talk with brokers or ask questions about that motor. There is an intimacy and that is why sales are made. The show brings together high-end products with high-end buyers. It is a family-friendly show and one of the best in the state.”

Vero Beach hosts two boat shows at the Indian River County Fairgrounds targeted at different market audiences. The fall show attracts returning snow birds who are beginning to boat again, while the spring show is for local residents and families getting ready for summer boating. Vendor fees are used to promote the shows while parking and admission are free.

“Twice a year all of the dealers from Fort Pierce to Sebastian come together to provide local sales and service people to the local residents,” says Brian Cunningham, general manager of Vero Marine Center and organizer of the boat shows for the past 29 years. “The key is local and you get to meet the people who will take care of service after the sale. These are dealer shows and small by design.”

In January, the Second Annual Florida Sportsman Outdoor Expo was held at the St. Lucie County Fairgrounds west of Fort Pierce. Organizers were happy with the turnout despite cold temperatures, wind and rain. “The weather was terrible, but we had a good turnout,” show director Rick Ryals says.

A kayak fishing tournament was scheduled at a retention pond next to the fairgrounds. Ryals was sure no one would sign up. Eighty-two entrants had to climb in their kayaks and fish until they were blown to the other end of the pond. And the wind was too strong for anyone to paddle back to the other end. A 4.5-pound fish won the contest. Plans are still being finalized for next year’s expo.

Numerous seafood festivals in Fort Pierce have been cited as a contributing factor in the city’s Main Street being named No. 1 on a list of the best small town Main Streets in America. Thousands turned out for the Oyster Festival in April.

The Port Salerno Seafood Festival contributes to the livelihood of about 40 families with proceeds going to the Port Salerno Commercial Fishing Dock Authority, which maintains the docks, providing membership with affordable boat slip rates. Twelve other local charities receive funds from the festival.

Fresh From Florida, a state agriculture department marketing program, is a major sponsor at all Treasure Coast seafood festivals, says Price, event coordinator for the 2017 Port Salerno Seafood Festival. “Fresh From Florida provides events with brochures, recipes and promotional materials,” she says. “Locally caught fish is a major component of these festivals. They generate awareness and allow not-for-profits, local vendors and businesses to participate and reach out to the public. Festivals are also used as fundraisers for environmental causes.”

While tournaments and boat shows help educate people about the waterways, two specific events, not limited to boaters, have been set up to make a difference. The Ninth Annual Treasure Coast Waterway Cleanup will be July 23 and the Indian River Lagoon Science Festival is scheduled for Nov. 12 at Museum Point Park on South Hutchinson Island.

You don’t have to be a captain to get out and see the fish at the weigh-ins, kick boat trailer tires or learn more about boating on Treasure Coast waterways.