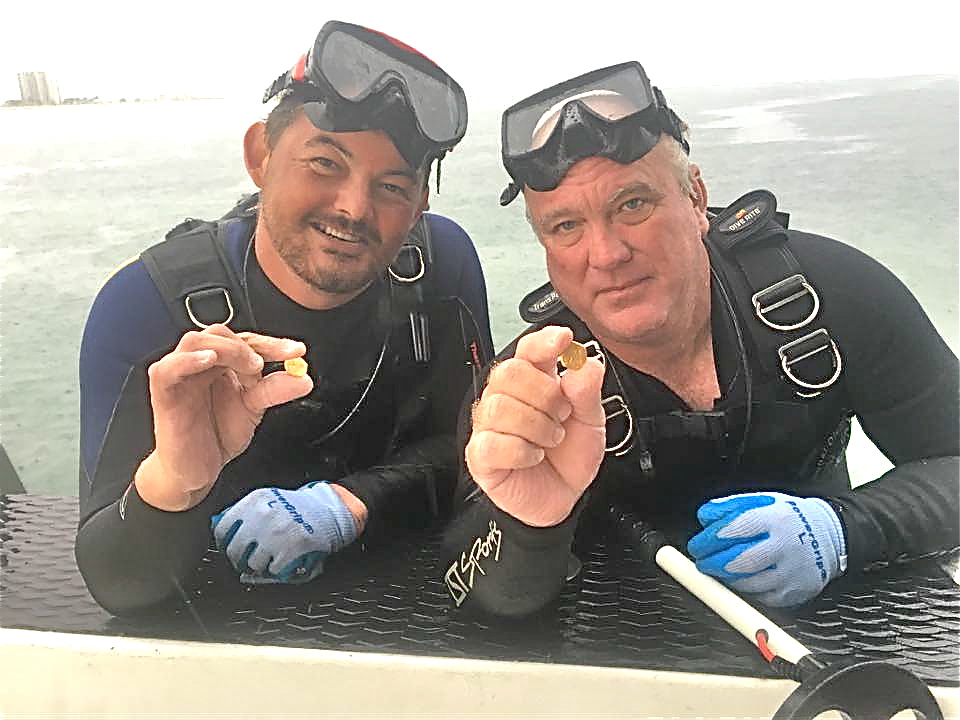 FORT PIERCE, June 23, 2016 – When Josh Fisher Abt (left) was growing up, his grandfather, Mel Fisher, would throw modern coins into a pool and challenge all the grandchildren to see who could find the most. That training came in handy when, this June, Abt, now 34, paid homage to his grandfather’s legacy by recovering his first gold coin from the 1715 Fleet on the Douglass Beach Wreck.

The find, a Bogotá two escudo (minted in the Columbian capital), is particularly sentimental for Abt as the Douglass Beach Wreck and many of the gold treasures it has produced were discovered by his grandfather well before his world-famous Atocha find.

The Spanish fleet of ships that sank off our beaches and gave the Treasure Coast its name was bound from Havana for Spain, heavy with New World gold and silver when a hurricane sank 11 of the fleet’s vessels on July 31, 1715.

In 1963, Kip Wagner and the Real Eight Corporation contracted Fisher to work to investigate a new wreck site and it was on this site in May 1964 that his crew dove down after using his new “mailbox” sand-blowing system to find a now-famous “carpet of gold” coins. They found 2,500 gold coins on that spot.

The ship that crashed in this area is assumed to be the Nuestra Senora de las Nieves, but no artifacts found there to date can 100 percent confirm this hypothesis.

Abt is first mate on Captain Dan Porter’s salvage boat the Sea Reaper this season. They spent the early weeks of this year’s salvage season working south of Fort Pierce Inlet. Abt first assisted Porter in recovering a two escudo, listened to the faint signal the underwater detector sounded for it, then detected and recovered another nearby within 20 minutes. The crew was working a known spot that had produced 821 gold coins in 1988.

“It just goes to show there’s still stuff out there,” says Abt, who has worked previously on a 1715 Fleet salvage boat and on the Atocha off of Key West. “It’s incredible being able to touch a piece of history, follow in his footsteps, and share it with the world.”

When he’s not working on the boat, Abt works as a jeweler making replica pieces out of Atocha silver for his mother Taffi’s jewelry line, Taffi’s Treasures, sold at the Mel Fisher Treasure Museum in Sebastian.

He attempts to evoke his grandfather’s spirit daily by saying aloud, “Today’s the day,” and reminding those he encounters to follow their dreams. It seems to be working so far.

To learn more about the wrecks and Abt’s work, see 1715TreasureFleet.com and MelFisher.com.