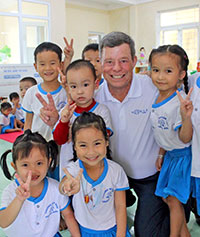 Travel changes people by opening their eyes to new cultures and ways of life. But Fred Grimm, who was just a year out of high school in April 1969, did not choose to visit the distant and exotic country of Vietnam. Yet after being drafted to serve in the Army during the undeclared war there, he remembers being pleasantly surprised for the first day or two by the country’s lush greenery and friendly people. That first impression might be what changed his life — and the lives of many others — for the better.

The honeymoon phase of his deployment with the 39th Combat Engineer Battalion American Division (where his unit constructed a bridge and guarded a landing zone) was brief as he was wounded by shrapnel just four months later. After recovering in a Japanese hospital he returned home to Minster, Ohio, and into the arms of his childhood sweetheart, Jill. They were married within months, but he says he thought of Vietnam thousands of times in the years that followed as the couple raised their family in Ohio and joined the Harbour Ridge community in Palm City in 1990. Both retired (she from her interior design business) in 2016. 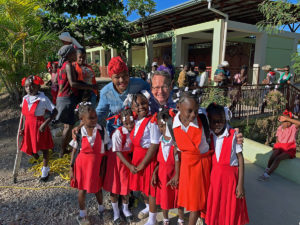 It Takes a Village

Even though mass demonstrations have shut down Haiti’s government and kept virtually all schools closed for months, it’s been business as usual for one small primary school in the Haitian countryside that has strong ties to the Treasure Coast.

The Children’s Academy and Learning Center, supported by Vero Beach-based Haiti Partners, has remained open in a village five miles from the capital, Port-Au-Prince, despite anti-government protests that have paralyzed the country. The demonstrators, angered by rising gas prices and severe food shortages, have blocked roads in major cities, set fires and even harassed children wearing school uniforms to frighten them into staying home.