After seeing it for the first time, world traveler and nature-lover Diane Wynne knew she wanted to buy the Mediterranean Revival-style home with a rich history and sweeping views of the Indian River in Fort Pierce.

One of three 1920s mansions built over six years on 2.5-acre lots on Indian River Drive, the home is preserved in the historic style of the era’s competing architects in the high-end South Florida market, including Addison Mizner and Marion Sims Wyeth.

A former furniture gallery owner and interior designer from San Francisco, Wynne bought the home in 2017 and shipped everything she owned across the continent in two large moving vans. She has transformed the home into a museum, with art and relics from Africa and Asia in every room.

But the history of the home begins with the Lesher sisters, who, with their husbands, built two mansions on two southern lots. Judge Alto L. Adams Sr. lived in Wynne’s home, which is on the central lot, until he sold it and moved to Tallahassee to serve on the Florida Supreme Court.

When he lost an election for governor to fellow Fort Pierce native Dan McCarty, Adams returned to Fort Pierce and purchased the northern house.

Misty Minton’s father, Bill Padrick, bought the south house in 1946. She grew up there and moved back into the home in 1987 when her husband, Michael, purchased it.

“The houses shared a driveway and both houses were beautifully landscaped. The architecture of all three homes is spectacular,” Minton says, adding that all three also had bomb shelters underneath the garages that have since been sealed up.

The north and south houses were designed by architect Marion Sims Wyeth, who also designed the Governor’s Mansion in Tallahassee and Mar-a-Lago in Palm Beach, but an announcement in the Sept. 18, 1929 issue of the The Palm Beach Post credited architects Hatcher and Funke from Fort Pierce and Palm Beach with the design of the Wynne home. Still, the home bears many resemblances to Wyeth’s style, such as the outside stairway and hallway, the types of tile and iron used, and the pecky cypress beams and heavy doors throughout the home.

The original architectural style is still on full display, but the home’s look has changed throughout the years, reflecting the changing styles of its owners. The outside hallway and stairs were enclosed by previous owner Dr. Paul Mondo as well as the lanai that was open from the main house at the kitchen. The pass-through window from the kitchen was removed, and today the family room is enclosed and air conditioned. Mondo also added a large master suite on the first floor with a sitting room, walk-around closet and his and hers vanities.

When Wynne purchased the home and decided to renovate, her brother, Frank, oversaw the project.

“We restored the tennis court, added lighting, reinsulated the attic, replaced five AC units and the hot water heater and remodeled all three upstairs bathrooms,” Frank Wynne says. Wrought iron bars that came from the north house were refurbished, painted and installed over the windows in the music room. He also planted more than 500 plants around the property.

Frank Wynne applied imported Venetian plaster in the front entranceway and several other rooms in the house.

“It is the same plaster they use in the old buildings on the canals in Venice,” says Diane Wynne. “It lasts forever, absorbs moisture and is good for a Florida home.”

The servants quarters, which was built in 1945, is today a mother’s cottage and home to Grandma Betty Wynne. It sits next to the garage, which used to be a carport. The pool and cabana, which were also built in 1945, needed nothing more than a little paint.

The 7,000-square-foot home is filled with exotic items from Wynne’s world travels. She acquired much of her furniture and collection of relics on trips to Tunisia, Morocco, Botswana, Zambia, Mozambique and South Africa. Four African wedding beds from Mali, a Moroccan wedding blanket, various hats, necklaces, masks, urns, bowls, African textile Kuba cloths and many other artifacts are on display throughout the home.

“African and Asian collectibles are my passion and I love the energy and the stories and the history,” Dianne Wynne says. “Everything I acquired was for this house. This place tells my story.”

Wynne — who is fluent in Spanish — named the estate Healing Oasis at Armonia Del Rio, which means “river harmony.” She hopes to share her home by offering healing retreats, meditation and stargazing opportunities.

“It is a magical, conscious experience,” she says. “It is so welcoming, like the Garden of Eden, and has so much healing power.”

An enthusiastic host, Wynne has already had several parties and welcomed many guests, including her friends and three grown children. She loves to cook.

“I have a beautifully stocked kitchen ready for the pleasure of my guests,” she says.

Decorated in Arab Bedouin style, the great room is a favorite place for Wynne to relax, but she really enjoys sitting in her garden.

“This property is patient and teaching,” she says. “The plants teach me. I rescue insects from the pool and watch them recover. I have butterflies, lizards and snakes.”

And then the consummate hostess says, “I am supposed to be here. I am the guest here.” 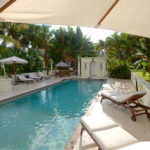 The pool area, featuring lush vegetation, a restored cabana and a barbecue grill, is perfect for gatherings. 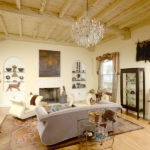 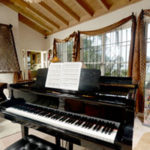 The music room has an antique wedding bed from Mali mounted on the wall. Wrought iron railings from the estate next door were restored and installed on the windows. 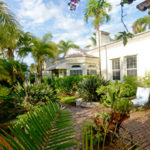 A rusty shopping cart from San Francisco is an eclectic planter in the garden just off the master suite. 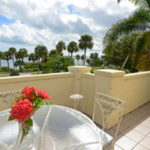 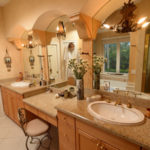 Refinished with Venetian plaster, the master bathroom features a spa tub, a shower and his-and-hers vanities. 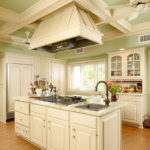 With intricate crown molding, the spacious chef-ready kitchen is set up to cook for large parties. 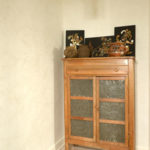 In the hallway to the pantry an antique pie case displays metal and wood renditions of indigenous Mexican ceremonies.
Please follow and like us: