Rock Solid beneath a veneer of luxury 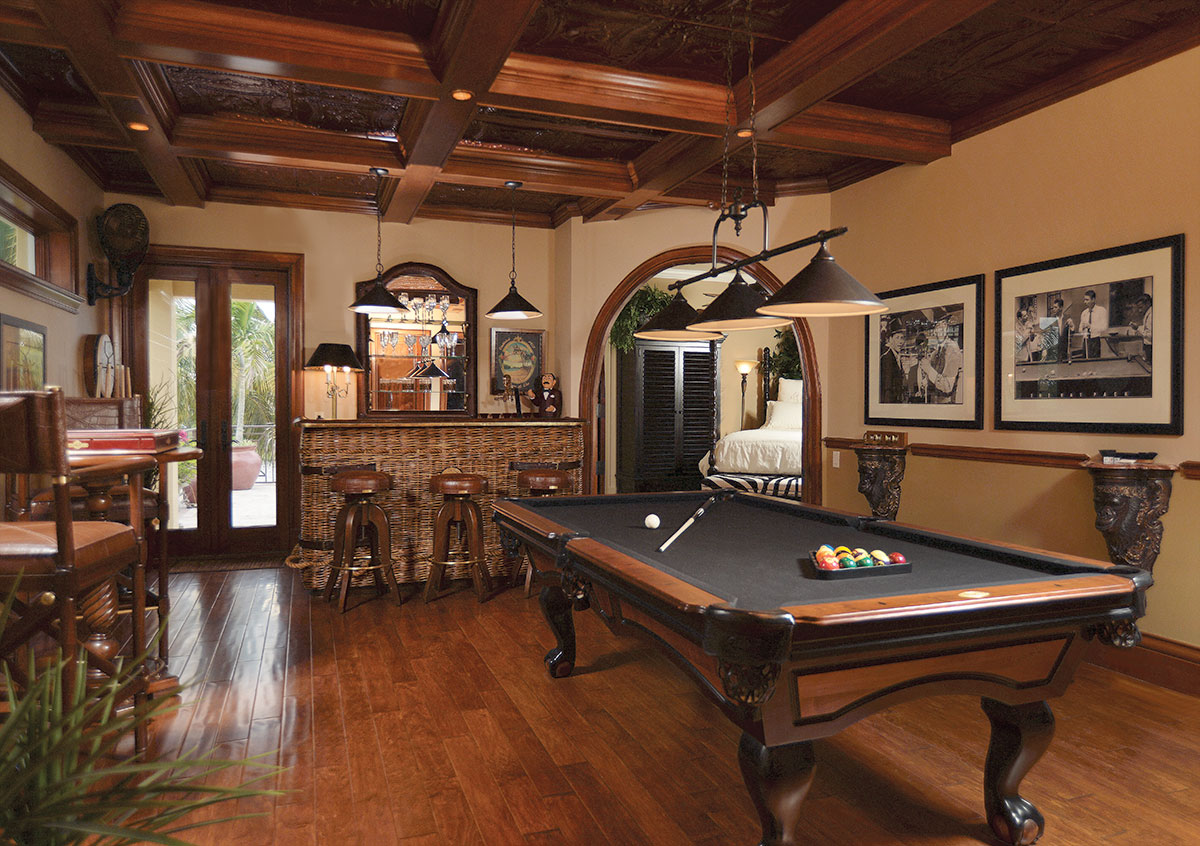 At the very end of 6235 Moss Ridge Point in the Medalist Golf Club, the upstairs pool parlor opens out to the guest suite, with quiet entrances to the large veranda. The bar was fashioned from a balloon gondola.

Home is built to withstand 200-mph winds and is energy efficient, too

After the mean season of hurricanes 11 years ago, Frank and Linda Todd decided to build a home that would stand the test of time.

Nestled on a lake and preserve at the Medalist Golf Club in Hobe Sound, the almost 7,000-square-foot home is a study in flow, energy efficiency and beefy hurricane-proof strength. It is poured concrete and steel block with 2-by-4 walls and insulation all the way around inside the house. Rated to withstand 200 mph winds, the roof is composite fiber, which looks attractively like slate.

“I wanted the house to have a sense of robustness,” says Frank as he points out how when you enter the foyer you immediately see very thick, high walls with arches over the entrances to the study, master bathroom, kitchen, hallway and dining room. Looking straight ahead, the house flows under a seemingly suspended landing on the second floor through the living room and out to a vanishing edge saltwater pool with the lake behind it.

Most striking in the foyer are the ornate, shiny nickel ship maidenheads facing each other about 10 feet apart. Also called keels, the twin sister Spanish galleons Tolosa and Guadalupe sank in a 1724 hurricane off the Dominican Republic on a voyage between Cadiz, Spain, and Mexico.

SALVAGER’S DESCENDANT
Frank, a retired hospital administrator, is a direct descendant of Capt. William Helms, who was commissioned by the Queen of Spain to salvage treasure and claim property in land grants in the mid-1700s. Helms discovered the two maidenheads about 10 feet apart and nearly 250 miles from where the ships sank. Frank went to British Virgin Islands when he discovered he had a permanent lease on a dilapidated building. The twin sisters had been sitting in a building for generations until Frank discovered them.

The third home he has designed himself, from the home’s first designs on a napkin to the final touches, Todd was involved with the design and construction process, which took 30 months to complete. “Frank was essentially there every day when they were building,” says Linda. “We traveled and collected (art). You pick up something everywhere you go. It took a lot to furnish this house — two years to collect everything.”

“I made the box and she made it look like something,” says Frank. The shower design has tiles that shine like a waterfall flowing smoothly out and down in both the master tub and walk-in rain shower. Linda laid the tiles down on the floor for the tile man to install the design. With no formal training, she has an eye for detail. Subtle color shifts and recessed lighting accent the crown molding in every room. Every door that normally stays closed activates the inside light when opened, including matching, walk-in his and her closets leading to the master bedroom. The large master has views of the patio, pool, lake and preserve.

MIXED MOTIFS
Fine pieces of art from Africa, Europe and Bali, Indonesia, are complemented by period furniture from Maitland-South. With an African animal motif, it is elephants, monkeys, lions, parrots, giraffes and zebras everywhere. Some of the walls had to be reinforced to hold heavy sconces, while a cut-out box was reinforced to hold the weight of a 600-pound statue that fits by just an eighth of an inch into its shelf.

The staircase gracefully glides from the foyer to the landing. With poured concrete over a panic room, the steps are firm under your feet. It took three different engineers before Todd finally had the structural design he wanted for the stairs and landing.

All of the 8-foot doors in the home are arched, with the door to the guest suite beautifully hand-carved in Bali. The upstairs pool parlor includes a Maitland-South bar made from a balloon gondola. Outside is a large sundeck overlooking the pool, lake and preserve, with trees blocking out the houses across the lake. Frank deliberately turned the house as much as he could on the lot to keep from looking at neighbors on either side. The west wall has one window in the master bath, while the narrow, impact-resistant windows on the east side allow some lake views.

EFFICIENCY TO THE MAX
“It was designed so no sun comes in the windows,” Frank says. “You have no heat problems, no UV light damage.” The air conditioning cools with three commercial grade air handlers and three compressors — all with a 19 SEER efficiency rating. “Excess air is dumped to the (three-car) garage to cool it for free,” he says.

Blown foam insulation throughout the roof system completes the maximum energy efficiency of the home. The Todds say the house is so quiet when there is a storm, you don’t know it unless you look out the window.

When he received a $19,000 bill for annual homeowner’s insurance, Frank asked for a wind mitigation inspection. After the report came back, the new bill was $2,800. Electric bills range from $200 in the winter to almost $500 in the summer. The couple leaves the AC on whenever they travel.

SPECIAL EFFECTS
Those robust walls around the dining room at the foyer have a hidden use. Paintings of the twins, Tolosa and Guadalupe, line the wall on either side of the arched doorway. The paintings open to reveal china stacked on secret shelves.

The best special effect award goes to the Chicago brick accent wall in the dining room. When you look up at the arched ceiling, smoked mirror glass makes it appear that there is a long hall behind the wall.

Around the corner there is a similar illusion with arches leading into the wine cellar with a ceiling that looks like half a barrel. A painting with the same wrought iron door pattern gives the appearance you’re walking down the steps to the river. The cellar has two refrigerators and a wine preservation nitrogen system to preserve open bottles.

Linda loves her kitchen with triple bullhead marble tile and a large center breakfast island for entertaining. “I love to cook and I have cooked for 100 people before at this house,” she says, “It was quite comfortable, but I like to cook for 18 to 20 people.”

Frank has different ideas about design when it comes to the everyday nuisances of light switches and outlets. “You feel it, but you might not see it,” he says. When you look around a room standing at eye level, the outlets are missing. Todd had them painted white and mounted on the baseboard trim. Light switches are at the same level as door knobs, and the AC vents on the great room ceiling have been faux painted to match the wood ceiling. The thermostats in almost every room are higher up on the wall so they can be viewed for adjustment.

If the electricity goes out, a 35-kilowatt propane generator will power the house in seconds. The 1,000-gallon propane tanks also supplies gas to two fireplaces and the kitchen’s Thermador dual fuel and gas range with griddle.

‘SOUND BONES’
“The Todds had some very unique art, which we incorporated into the home,” says First Florida Development and Construction president Paul Kleinfeld, who has built about 200 luxury homes in the Stuart area over the past 40 years. “Frank was very involved in the building process and from a creative perspective, ensuring the design integration of old and new, achieving a harmonious blend. There was emphasis on detail finishes and trim assemblies while we incorporated the owners’ artwork. Structurally, this home has very sound bones, as required by the engineer and architect, but when the opportunity arose and decisions were made, Frank always instructed us to assemble and build to exceed code.”

But sometimes that “robustness” was added as a design element. The covered lanai is below the second story poured concrete veranda. Todd added beautiful wooden beams that appear to hold up the ceiling.

“It was built to withstand any hurricane that could hit Florida and most tornadoes other than F4 or F5. This house was built beyond code in almost every way,” he says.

After 10 years in the home, the Todds have decided to downsize. The house, at 6235 Moss Ridge Point, is listed for sale at $1,499,999, with Michele Tucker at Florida Living Realty.