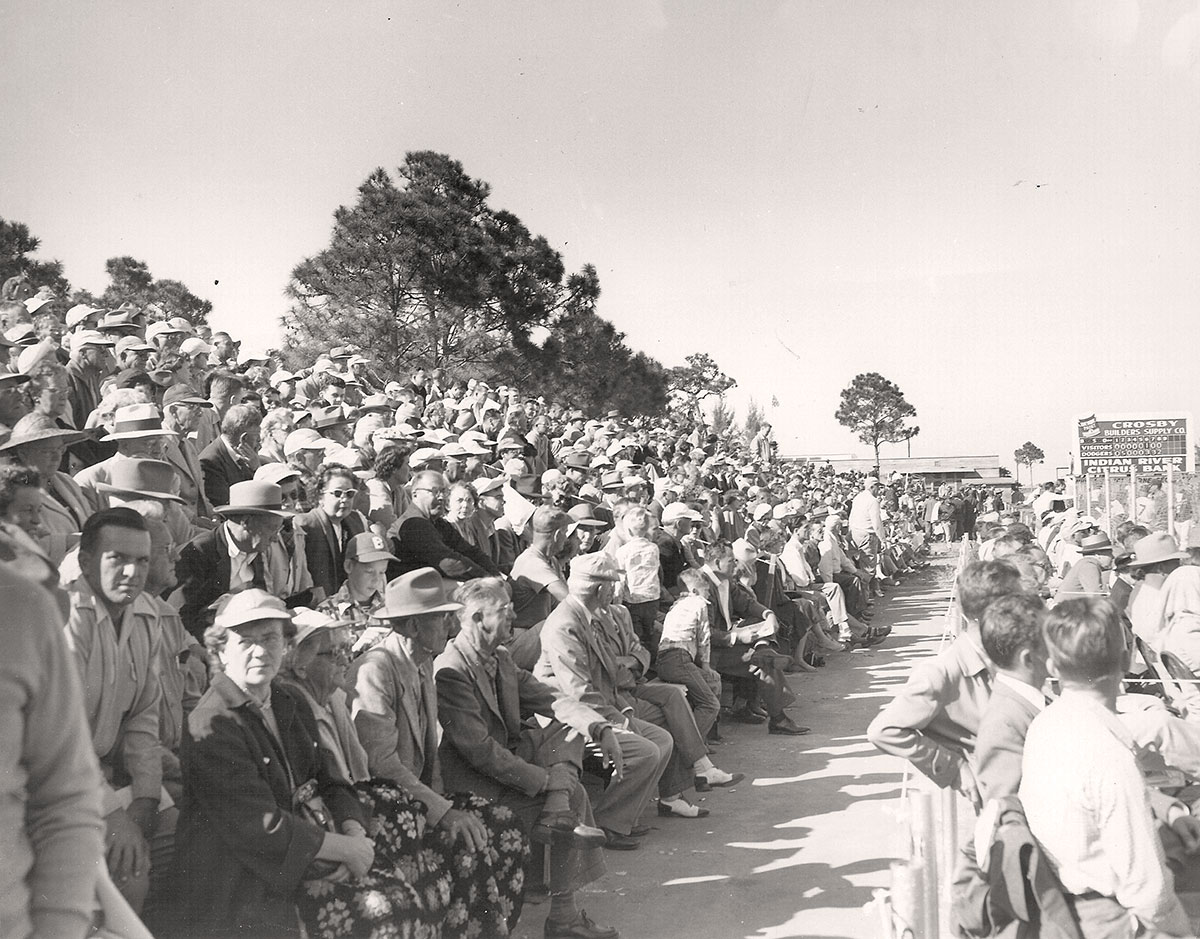 On opening day in Vero in 1948, Jackie Robinson, the first African American to play in the major leagues, homered for the home crowd. IRC HISTORICAL SOCIETY

For 61 years from 1948 to 2008, Vero Beach was a familiar name to baseball fans. Dodgertown was the classic major league spring training site. Then it was gone, and Vero survived.

It began with Jackie Robinson, the man who broke the racial barrier in Major League Baseball. Brooklyn Dodger owner Branch Rickey signed Robinson and needed a place to train. In 1947, the team spent spring training in Havana, Cuba, where discrimination was less prevalent. However, Rickey was looking for a permanent training center in the United States and believed there was less racism in Vero Beach.

The former naval air station, which the Federal Aviation Administration had turned over to the city, seemed like a good solution. Bud Holman, who oversaw airport operations, heard by word of mouth that Rickey was looking for a permanent site. In the property, Rickey liked what he saw: barracks where his 600 players, black and white, could live together and space to build fields and a training center.

FIRST GAME A HIT
On March 31, 1948, the Brooklyn Dodgers played their first game in Vero Beach against their farm team, the Montreal Royals. They played on a field with wooden bleachers and no outfield fences. The town turned out in mass. Robinson hit a home run. Dodgertown, which was first named Dodger Town, was featured in newspapers and magazines nationwide with the cover of Life showing Dodger players in training.

In 1950, Walter O’Malley replaced Rickey as team president and brought a family atmosphere to Dodgertown. In 1953, he built Holman Stadium at team, rather than community, expense, a thing unheard of today.

The Dodgers won their first World Series beating the Yankees in 1955. The town’s two drug stores installed TV sets so fans could watch the games.

With lack of support in New York for a new stadium, Walter O’Malley took the Dodgers to Los Angeles in 1958. The fear in Vero Beach was that spring training would go west where the team would be closer to its fans. But no, O’Malley was committed to Vero Beach. 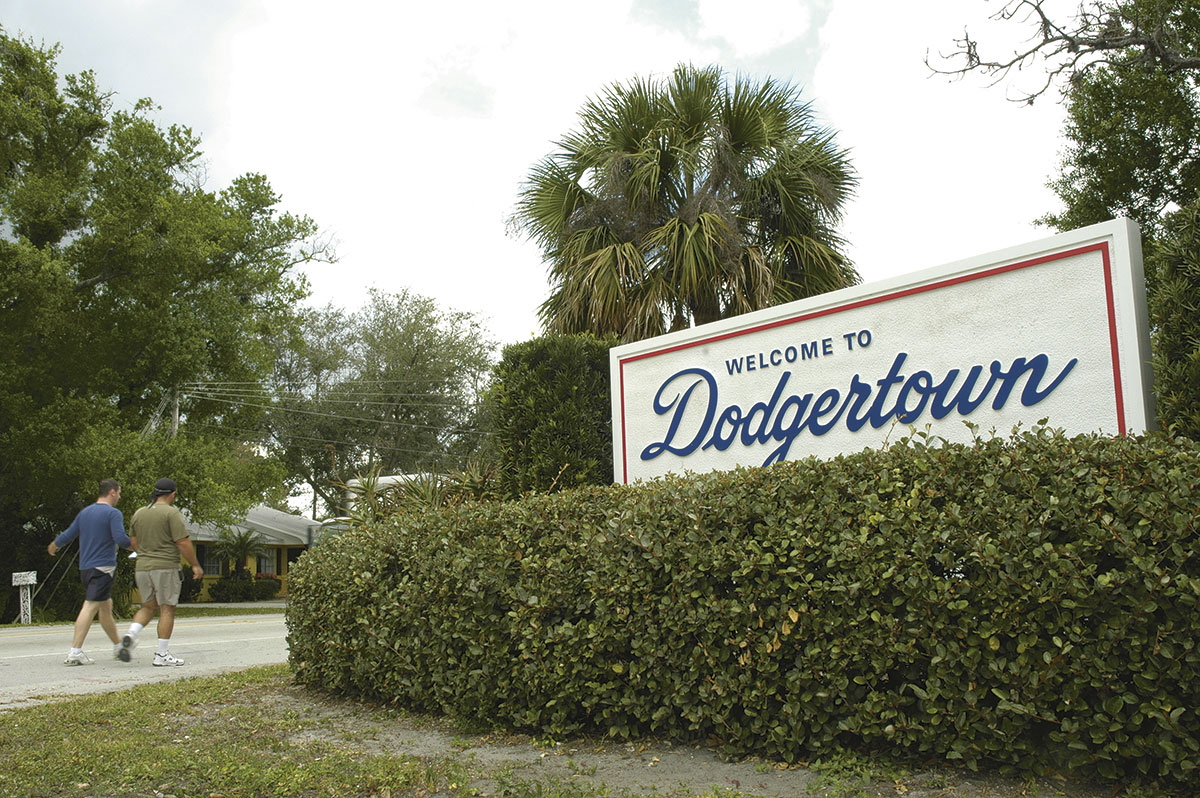 From 1948 to 2008, thousands of fans were welcomed to Dodgertown. MARK DOLAN 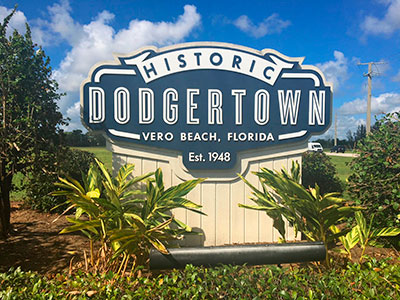 Today, the complex is known as Historic Dodgertown. MARK DOLAN

PLAYERS’ CONCERNS ADDRESSED
For the black players in the 1960s, it had never been easy outside Dodgertown in the segregated localities. They approached Peter O’Malley, then director of Dodgertown. “Peter,” they said, “Jackie integrated baseball in 1947 and we still have a problem in Holman Stadium.” He immediately removed the Colored signs and integrated the stands. The Dodgers set an example and school integration in Indian River County went relatively smoothly.

The FAA demanded the Dodgers team pay rent to the city to support the airport’s maintenance. A battle raged between the FAA, the city and O’Malley. It was settled with the Dodgers buying the Dodgertown property from the city for $134,000.

With Dick Bird, a young golf pro raised in Vero Beach as Dodgertown director, Walter O’Malley constructed the nine-hole golf course. An 18-hole course with an attractive clubhouse was added in the 1970s.

The Tokyo Giants baseball team trained at Dodgertown, the first of 17 international teams to do so.

The Dodgers won three World Series in the 1960s led by Maury Wills, Don Drysdale and Sandy Koufax. Koufax would live in Vero in future years.

COMINGS AND GOINGS
As the town grew with John’s Island, the Moorings and a second bridge across the Indian River, Dodgertown expanded as well in the ’70s. The old barracks came down despite being a revered memory for so many Dodger personnel. With the modern villas that replaced them, the Dodgers established a conference center to attract corporate business. Craig Callan replaced Charlie Blaney as Dodgertown director in 1988 and was associated with the Dodgers until his retirement as vice president of Historic Dodgertown in 2018.

After 19 years, Walter Alston retired as team manager, replaced by Tommy Lasorda, whose baseball career started at Dodgertown in 1948. Lasorda won three National League titles in the 1970s with the infield of Ron Cey, Billy Russell, Davey Lopes and Steve Garvey. Almost 8,000 people filled the seats and sat on the outfield berm at Holman Stadium for a game with the Yankees.

In 1980, the Vero Dodgers joined the Florida State League. Steve Sax played its first year and soon became the big team’s regular second baseman. Steve Wasiak was the manager. He had the most lifetime wins of any manager in the history of minor league baseball. The Vero Dodgers won FSL in 1983 and 1990.

The New Orleans Saints NFL football team trained at Dodgertown from 1976 to 1984. In a memorable scrimmage they faced the Miami Dolphins. Archie Manning and Bob Griese were the quarterbacks.

The Dodgers with rookie pitcher Fernando Valenzuela won the 1981 World Series. In 1988 the Dodgers won again with the heroics of Kirk Gibson and the pitching of Orel Hershiser. The Dodgers have not won a World Series since.

SALE SHOCKS COMMUNITY
While the Dodgers were no longer winning World Series, they remained popular in Vero Beach. More than half of Holman Stadium was sold out to spring season ticket holders. Then came a shock. In 1997, Peter O’Malley announced the sale of the Dodgers.

Estate planning was given as the reason, but there was more. He was unable to get approval for a pro football stadium next to Dodger Stadium in Los Angeles, and he was reported to be unhappy with the state of baseball. As Vero Beach resident and former baseball commissioner Fay Vincent said, “The business of baseball is ugly, the game of baseball is lovely.”

An article in the Press Journal stated: “Much of what Vero has become over the past 50 years can be traced to the Dodgers.” A new buyer would probably move the team to Arizona for spring training.

The newspaper also shocked the community by announcing its sale to a national media conglomerate. Vero Beach lost two of its institutions.

DODGER BLUE FADES
Rupert Murdoch’s News Corp. bought the Dodgers for $350 million in 1998 to be part of Fox Television. Fox quickly traded the most popular Dodger, Mike Piazza, as part of a Miami Marlins-NY Mets deal. This was more about adding Miami to the Fox Sports Network than baseball. Manager Billy Russell, who had replaced Lasorda after his heart attack in 1996, was fired, as was Dodger General Manager Fred Claire, the beginning of continued management chaos.

Fox was negotiating with Arizona interests to build a spring facility for the Dodgers. With the threat of losing the Dodgers, the city and the county agreed to buy back Dodgertown for $10 million, plus $9 million for capital improvements. This would require a 30-year county bond issue with a debt service of $29 million.

In the past, the O’Malley team had paid $300,000 in local taxes and given $50,000 a year in donations to local charities.
With the chaos of the Fox management, a Los Angeles columnist commented, “Dodger blue? The allure is gone, the aura dust, the tradition a distant memory.” The team had a losing record in 1999.

MAJOR CHANGES
By 2003, Dodgertown looked different. An impressive two-story clubhouse and administration building stretched across Holman Stadium’s right field. Players could now leave the field without fan contact, a factor that had been so much a part of the stadium.
But now Fox had had enough of baseball. Murdoch admitted that he only bought the team in an attempt to obtain TV sports rights in Los Angeles. There was only one bidder for the team, Boston real estate developer Frank McCourt and his wife, Jamie. They offered $420 million, but came up short. Fox provided them financing. Under the ownership of the McCourts, the chaos continued. Players were traded. Managers came and went. The McCourts spent little time in Vero, a far cry from the O’Malleys.

In 2007, the McCourts decided to move the Dodgers to Glendale, a suburb of Phoenix. The team would share a $76 million 13,000-seat spring training stadium with the Chicago White Sox. The Vero Beach minor league team departed as well, moving to San Bernardino, California.

The McCourts were allowed to break their lease with the county but had to pay off the bonds. They did, however, have an option to repurchase the property. The city and county did not want to lose ownership of Dodgertown, a property that could appreciate and might attract another team. The McCourts escaped with no penalty.

In 2008, the Dodgers left for a China tour in the middle of spring training thus depriving the community of fully celebrating the team’s 61 years in Vero Beach. In that final spring, Dodger fans from all over the country flocked to Vero Beach to see the hallowed Dodgertown before it closed. As local sports writer Ray McNulty noted, “In time the Dodgers would become nothing more than a fond memory, just as they are in Brooklyn.”

EVENT ROSTER FULL
Dodgertown as such was no more, but Historic Dodgertown is thriving. Major League Baseball owned the original Dodgertown name but in a 2013 agreement the current name was allowed.

The facility is a Florida Historical Landmark. The legacy of Dodgertown lives on.