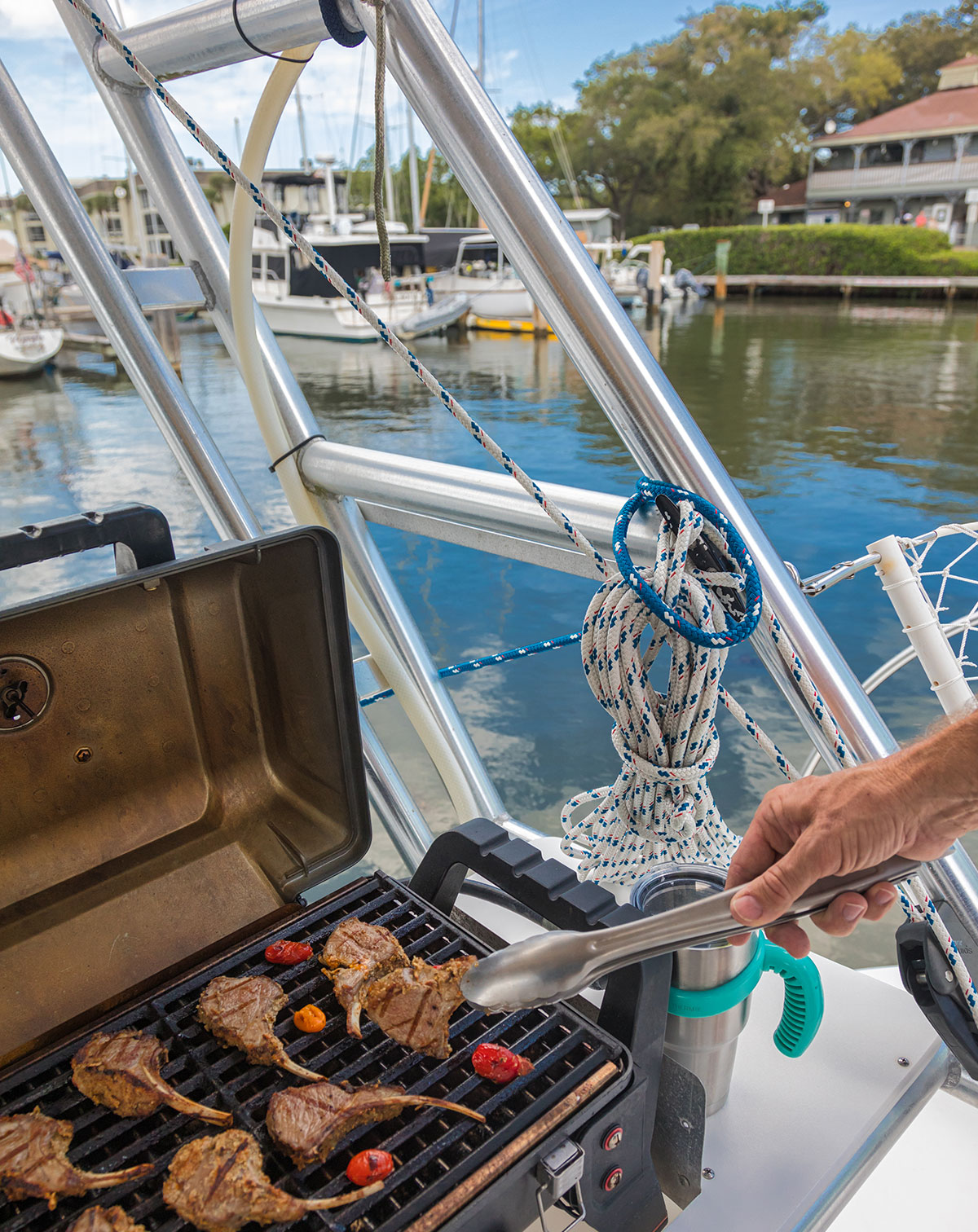 Capt. Bruce Jackson fires up the barbecue grill for a gourmet feast aboard S/V Moonraker.

Take a picture-perfect day. Add a private yacht, a seasoned skipper, a gourmet feast and you have all the ingredients for a fun-filled day of sailing, dining and merrymaking with Sail Moonraker.

So it was that one sunny afternoon, a group of friends and I strolled down the dock to meet Capt. Bruce Jackson. For more than 10 years, Jackson has been conducting cruises aboard his 40-foot Manta sailing catamaran, Moonraker.

Home to more than 4,300 species of plants and animals, the lagoon is a nature lover’s paradise boasting five state parks, four federal wildlife refuges and a myriad of spoil islands. A cruise promises a bird’s-eye view of the wildlife inhabiting its environs and some of the most stunning homes gracing its shores.

Pulling off the dock and heading north of Vero Beach City Marina, Jackson chatted about his lifelong love of adventure. Always an avid sailor, one day he hung up his business suit and left a 30-year career as a hospital administrator, setting sail for the Bahamas with his newborn son. “He had 7,000 miles of cruising by the time he was five years old,” says Jackson. Now that his son is 15 and in school, Jackson’s travels keep him closer to home, so he shares his love of sailing with charter guests.

“We do 26 moonrise/sunset cruises a year,” he says, adding that he named the boat Moonraker for the way the moonlight follows the stern on those full moon excursions. “My busy season is February and March when we do a lot of birthdays and anniversary parties. In the summer we have six-hour swim parties where we go five miles north to a manatee zone and (the guests) get to jump off the boat. We have swim steps that go right down into the water and a fresh hot and cold shower on the back where they can rinse off. We’ll have music going, then fire up the grill and cook the food they bring.”

For our trip, we were more than fortunate to have Jackson’s longtime friend and partner, Kitty Wagner, join us. Chef and owner of the Blue Star Brasserie in downtown Vero Beach, she arrived laden with a smorgasbord of delicious fare to munch on while underway. And as we lounged on the foredeck netting and swung in the cockpit hammock, Jackson’s experienced boat hand and solicitous steward, Sandy Hunter, served up drinks and Wagner’s buffet of delicious dishes: rosemary grilled lamb chops, tomato mozzarella caprese salad threaded on skewers, a scrumptious green olive and walnut tapenade, raspberry, mango, grape and fresh mint fruit salad, chorizo-stuffed dates and a selection of fine cheeses.

“Finger and snack food is the first rule of boating,” she says. “Anything you can hold with your fingers and put in a basket or on a platter that has a rim because you don’t want your food sliding around, works great. Foods like peeled shrimp, sandwiches and fresh salads are always good.”

She says she often grills some brightly colored vegetables such as yellow, red and green peppers, red onions, and squash. For a delicious and attractive hors d’oeuvre, serve on toasted flatbread with just a sprinkle of fresh basil and a sharp, salty cheese like Pecorino that will stand up to the sun’s heat.

But she cautions, “If you are on anybody’s boat but your own, avoid red sauces and red wines that may stain teak decks. Unexpected things do happen.” She also warns against bringing mayonnaise-based dishes that can spoil in the heat and suggests chilling cheese well prior to serving. And while one drink per hour of cruising is the average, Wagner advises, “Always drink plenty of bottled water because the hot sun and alcohol will cause dehydration.”

With the engines off and the mainsail up, we glided silently through the water with a renewed respect for the lagoon’s inherent beauty. A welcome respite from the hustle and bustle of everyday life, the sail allowed us to unplug from the world and just enjoy the lagoon’s natural beauty and Wagner’s scrumptious fare. As one guest noted: “Great friends, great food, fun times and, best of all, priceless memories. What more could you ask?”

There may be no better way to relax, unwind and make lasting memories than by spending a day sailing — and dining — on the Indian River Lagoon.

WHAT TO EXPECT
Cruises aboard Moonraker include bottled water, ice, soft drinks, glasses and tableware. Bring your food and beverages and Jackson and his crew will happily cook and serve it while you relax.

As deck space is often limited, restrict the number of coolers to those containing drinks and pack the food in collapsible insulated bags. 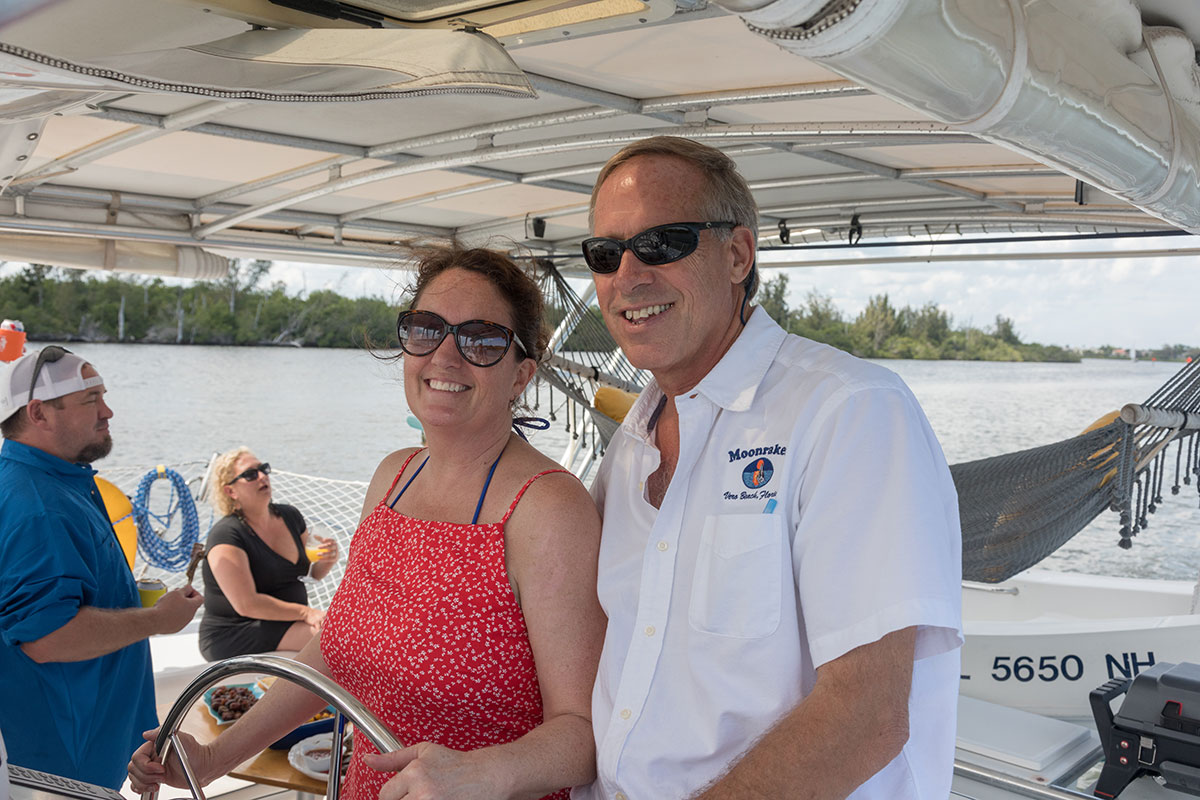 Wagner and Capt. Bruce Jackson at the helm. 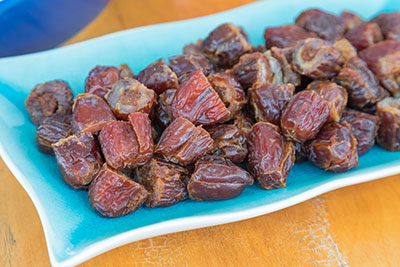 A delightful finger-food appetizer, these are quick and easy to prepare and are sure to be a crowd pleaser.

Cook the sausage in a sauté pan until done. Drain excess fat. Combine the sausage and cream cheese and chill until cold. Cut the dates in half and stuff with chorizo mixture.
Serve at room temperature. 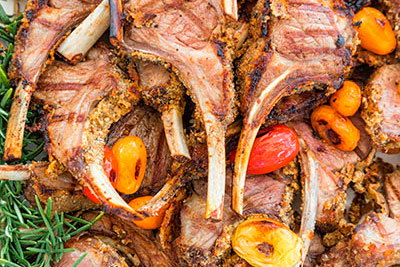 Perfect for a backyard barbecue or grilling onboard, these marinated lamb chops are sure to disappear quickly.

Cut the racks into individual lamb chops and season with salt and pepper. Mix together the rosemary, garlic, Dijon mustard and balsamic vinegar and baste lamb chops to coat. Marinate for 30 minutes before grilling to desired doneness. Serve and enjoy!