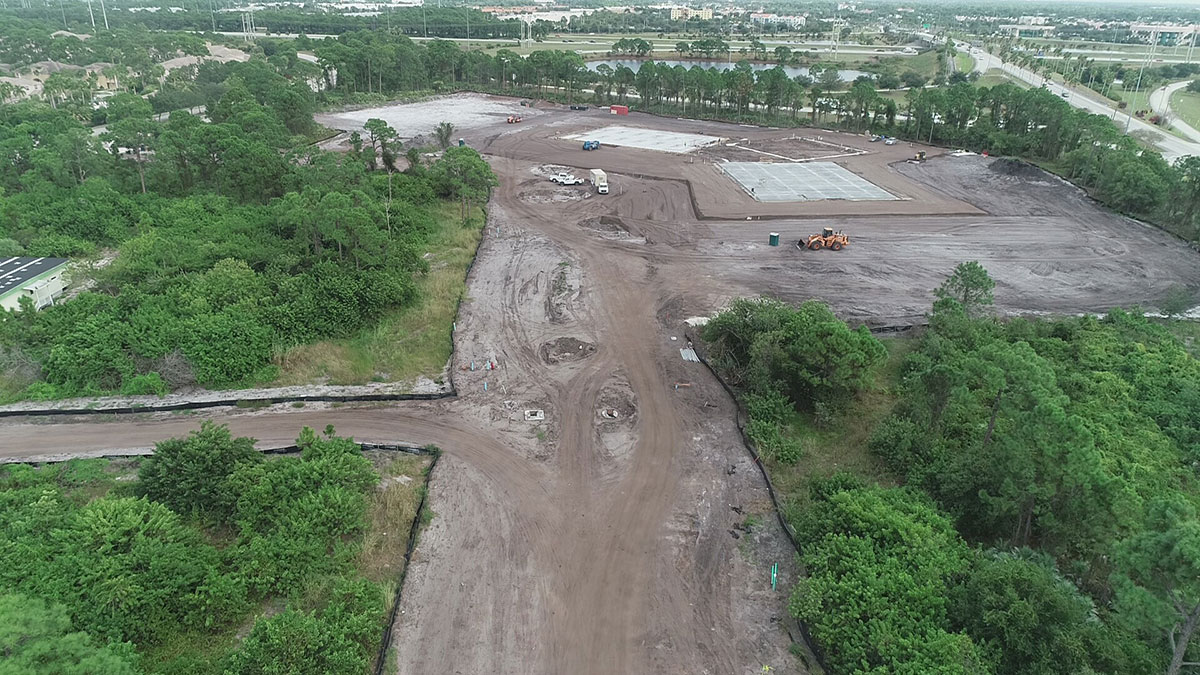 An aerial view of the new headquarters for the St. Lucie County School District shows two completed concrete slabs and the outline of a rectangle that will form the central section of the building. At top right, Interstate 95 and the St. Lucie West interchange are visible. ST. LUCIE COUNTY SCHOOL DISTRICT PHOTO

St. Lucie County School District employees had to spread themselves out at various locations throughout the county because of hurricane damage. However, a new administration building will make them one happy family again.

As Michelle Jerger sat back and contemplated the year her student assignment department spent working out of an Indian River State College office instead of the school district’s own offices, it seemed that things had gone pretty well, considering the challenges they had faced. But, she concluded, there was nothing like being together with the rest of the district’s employees under one roof.

The solution to the problem is on its way and expected to be ready by the time school opens next year.

School district employees were forced to abandon their offices in Orange Blossom Business Park on Okeechobee Road in September 2017 when Hurricane Irma dumped more than 21 inches of rain on the county. Water seeped under the doors and flooded the former Orange Blossom Mall where the district had offices since 2003. And it wasn’t the first time.

Immediately afterward the administrative offices scattered to different locations, including 11 public schools, with the student assignment department ending up at Indian River State College’s campus in St. Lucie West. Then the department had to borrow space at the college’s Fort Pierce campus for the couple of weeks before schools opened in August to handle the crowd of parents.

Ten people in Jerger’s office assign students to the schools they’ll attend and, in the two weeks before schools open, about 200 families a day are served.

School district spokeswoman Kerry Padrick says employees worked hard to cope with the challenges of being located all over the district. “They instituted creative solutions to provide the best possible access and customer service to parents,” she says.

“It was a lot easier for us when we were centrally located,” Jerger says. “I could just walk to someone’s office to straighten something out for a parent instead of saying I’d have to call them back. We don’t like to have parents wait, and they want to have immediate answers.”

STURDY STRUCTURE
Those problems end this summer when Jerger and the other 330 administration employees move into a rugged new $22.8 million administration building on 12 acres west of I-95, across from St. Lucie West.

The central portion of the new 111,000-square-foot building can be used as a shelter able to withstand a Category 5 hurricane with winds of 150 miles an hour and more, school board member Kathryn Hensley says.

In the event of a hurricane, that area will also become a command center with full generator-produced electrical power. “It’ll be a bunker,” Superintendent Wayne Gent told the school board during a November workshop.

The central area is also where the school board will meet and, with moveable seating and walls, it can be converted to a space that can hold a large number of people for a variety of uses, including teacher training and community events, Hensley says. Student assignment and human resources will be on the ground floor, making those two departments easily accessible by visitors.

The top floor will be home to the district’s television station and other offices. The second floor will contain offices and the information technology department.

“It is designed to support versatility in the use of spaces for professional development, student assignment operations, school board, parent and community meetings, in addition to collaborative work space for the departments that are currently displaced throughout the county,” Padrick explains.

Putting a new administration building west of St. Lucie West, in an unincorporated part of the county, may seem way out of the way to many people.

But with Interstate 95 within a stone’s throw of the building, “It will be easy to find us,” Hensley says. “We’ll be right off I-95.” They’ll be two exits north of Tradition, one exit south of Midway Road and two exits south of their old headquarters at Orange Blossom Business Park. From U.S. 1, motorists can go west on Prima Vista-St. Lucie West Boulevard, or Crosstown Parkway.

AVOIDING DISASTER
The choice to buy a parcel and construct a new building was a good one, school district senior manager John Gillette told school board members during a November meeting. “We looked at choosing a site we already owned, but this way we are not using existing school sites we may need in the future for schools.”

The elevation is higher than it needs to be to avoid another flooding disaster in the future, he noted.

A study by the county’s Transportation Planning Organization showed that within the next 40 years it will be almost in the exact center of the populated part of St. Lucie County. Currently there are plans to build many thousands of homes west of Tradition, a master-planned development not far south of St. Lucie West.

“Not only will the central location be better than being in the northern end of the county, but it will be more useful — as a shelter, as a place for parents to visit and for gatherings,” Hensley says.

The new administration headquarters is funded by insurance from the flood, proceeds from the sale of office space at Orange Blossom and sales tax revenue. The property cost $1.9 million; construction is $17 million and with the cost of architect, engineering, and other fees such as water and sewer connections, plus $2 million the board set aside for unexpected expenses, the project‘s budget comes to $22.8 million.

Contracts for architectural and construction services were approved by the school board on Dec. 12, 2017. The board selected Donadio & Associates Architect PA of Vero Beach and construction management firm Paul Jacquin & Sons, Inc. of Fort Pierce.

Substantial completion of the administrative complex is expected by early August.

Martin County school district is contemplating a new administration building not far from the old one on East Ocean Boulevard in Stuart. Their current building is nearly 100 years old.

Indian River County school district spent $7.3 million on new administrative offices and made the switch to the new building on 57th Street in January 2016. The old building, built 65 years earlier, was torn down nine months later.