Although COVID abruptly ended spring training last year, Major League Baseball has taken steps to ensure that it will go on as planned this year. COVID restrictions have been set and the Mets are eager to begin training at Clover Park with new faces and strong arms. The first home game is set for Tuesday, March 2, versus Houston.

According to team officials, ticket sales dates and safety precautions have been solidified by MLB, St. Lucie County and the Mets organization. The spring season will be a bit shorter than originally planned, but the great news is that spring training will happen.

Fans need to access the Mets’ website, mets.com/springtraining to see if tickets are available. New York Mets and St. Lucie Mets season ticket holders were given early access to tickets and the general public can seek tickets after Feb. 20. FAQs on the stluciemets.com website explain the COVID safety precautions to be observed by fans at Clover Park.

Regular season games at Citi Field in Flushing, New York, can be purchased online now. But the back of each ticket has a different look with the addition of a Fan’s Promise: the ticketholder’s agreement to not attend games if testing positive, experiencing any symptoms or having been in direct contact with a person confirmed or suspected of having the coronavirus.

In the Grapefruit League, attendance numbers will be lower, safety precautions will be observed and the concessions will be limited and have no-contact payment. Fans are advised to bring a debit or credit card to Clover Park for concession stand payments. The revised spring training schedule for the Mets consists of 24 games, with 12 home games played at Clover Park. The Mets will play the Marlins, Nationals, Cardinals and Astros six times each. With the reduced number of tickets available due to the pandemic, seats are expected to go quickly. The newly renovated 7,000-seat ballpark is expected to be filled to 20% capacity [approximately 1,400 seats], according to Mets officials. Ticket prices range from $15-$35. All tickets must be purchased online at mets.com/springtraining.

According to Mets officials, Clover Park will meet MLB, local health department and CDC guidelines to ensure the safety of all players, fans and staff. Fans will be required to wear masks that cover their nose and mouth at all times on ballpark property other than when actively eating or drinking at their ticketed seat. Stadium ushers and staff will monitor the crowd and ask all fans to comply with the safety protocols. Hand sanitizer stations and social distancing markers have been installed throughout Clover Park and staff will continually disinfect and sanitize restrooms and common areas, according to a Mets news release issued Feb. 12.

COMPLEX RENAMED
Pitchers and catchers reported Feb. 17. Decisions have not been made yet regarding the number of spectators at practice sessions. As with ticket sales, check stluciemets.com for FAQs regarding all aspects of spring training.

Last-minute touches are being completed on the $57M renovations at the more than 30-year-old ball field, now named Clover Park. The agreement reached by the Mets, St. Lucie County and the State of Florida on the renovations will keep the team in Port St. Lucie until 2042. Changes include a 360-degree walkway, renovations of the home and visitors clubhouses, a brand-new full-sized turf practice field, upgraded batting cages, a new minor league clubhouse, a new look to the outside of the ballpark and additional landscaping, among other items. 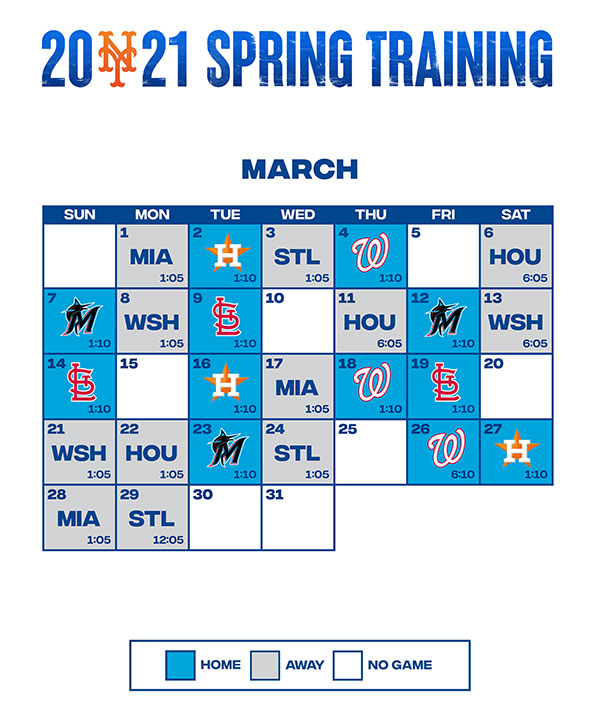 Fans who enjoy sitting on the grassy hill behind right field will be happy to know that The Hill remains a part of the ballpark. There will be cleared ground and the walkway for youngsters to shag home runs. Ticketed seats and tables along the first-base-line Party Deck have been removed, but some shaded seating remains on the deck. The situation at the Field Level Terrace along the third-base line is similar in appearance.

Hoping to improve on its fourth place finish in the East Division of the National League, the team has been busy signing players to add to the team’s pitching staff and depth. In an attempt to bolster the pitching staff, the team signed RHP Jordan Yamamoto from Miami, LHP Joey Lucchesi from San Diego and another lefty, Aaron Loup, was acquired from the Tampa Bay Rays. The pitching staff includes two-time Cy Young winner Jacob deGrom, coming off a hamstring injury that occurred near the end of last season, and Noah Syndergaard, who will rejoin the team in April, following Tommy John surgery last year. The Mets traded Steven Matz to the Toronto Blue Jays for pitchers Sean Reid-Foley, Yennsy Diaz and Josh Winckowski.

SHORING UP THE OFFENSE

Besides bolstering the pitching staff, the Mets have also been concerned with improving offensive stats. According to columnist Anthony DiComo of MLB News, the team, after coming to terms with Albert Almora Jr., struck a similar agreement with utility man Jonathan Villar. According to DiComo, Villar will provide needed depth in the infield as he has played many positions in his eight years in MLB.

Once Syndergaard was offered a one-year deal, outfielder Michael Conforto began eyeing a contract extension, but the matter wasn’t addressed prior to spring training season. He enters free agency in 2022, and has spent all of his years in MLB with the Mets.

If the use of the designated hitter, or DH, is approved for the National League, the Mets might try to sign free agent OF Jackie Bradley Jr. The team has been involved in talks with Bradley for some time. This acquisition could set up a domino effect on the field, according to columnist Joel Sherman with The New York Post, resulting in big bat and former Gator great Pete Alonso playing the DH.

MLB separated the Grapefruit League into two pods this year. Spring training games start on March 1 with the Mets heading to Jupiter to take on the Marlins. The last Mets home game is Saturday, March 27, against the Astros. Two away games follow, ending spring training on March 29. Coming to Clover Park to face the Mets this spring training are the Marlins, the Cardinals, the Astros and the Nationals. All home games begin at 1:10 p.m.

The regular season is set to begin in New York City on April 8, with the Mets hosting the Marlins and looking for more than last year’s fourth-place finish in the NL East.