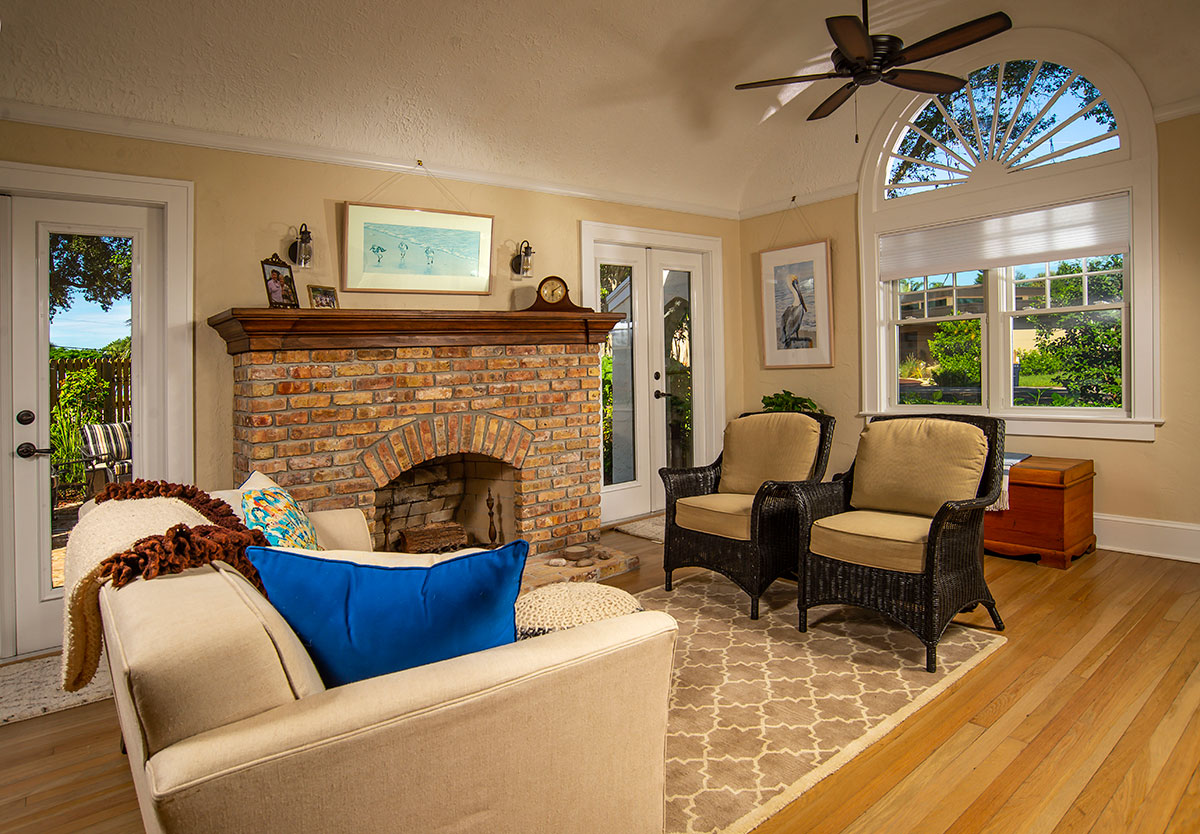 Houses built during the early years of St. Lucie Estates were designed to evoke fantasy and whimsy for home buyers looking for an unconventional aesthetic — out of the ordinary and playfully humorous in an enchanting way. The home of Dan and Janice Thomas on Southeast Pelican Drive is such a place.

The house is a classic example of the storybook style from the 1920s to the 1930s, a type of architecture similar to the Tudor Revival of the 19th century that brings to mind the illustrations in Hansel and Gretel or a Hans Christian Andersen fairy tale.

Built in 1932, this house and others like it were architectural comfort food for the Depression era. It retains its original Tudor Revival characteristics, such as steeply-pitched gabled roofs, ornamental half-timber wall surfaces, archways and a prominent old English-style chimney. Storybook style is a streamlined version of Tudor Revival, ideal for the somewhat small-to-average lot sizes of St. Lucie Estates.

This whimsical style of architecture appealed to the current owners, as did the historic neighborhood itself. Equally appealing was the recent renovation that made it a “turnkey” home ready for immediate occupancy.

“The main attraction was its charm and uniqueness,” Jan notes. “We have always been interested in homes with character and avoided cookie-cutter ones. And St. Lucie Estates is a wonderful mixture of people who tend to embrace the fact that this neighborhood is full of history. There’s a sense of pride and appreciation.”

Other storybook style elements add to the allure of this St. Lucie Estates house, such as rows of single-hung windows that dominate the façade. Their upper sash is divided with gridded mullions and subdivided into small single pieces of glass. On the right side of the facade, a palladium window with its original glass is above a pair of single-hung windows.
Extensive renovations by the previous owners include a new roof and a newly remodeled bathroom, along with hurricane impact windows and doors. The original walls and Dade pine hardwood floors were refinished. Renovations outside include new landscaping and antique wrought-iron fencing, along with a courtyard in back and a patio in front, both paved in Old Chicago brick. 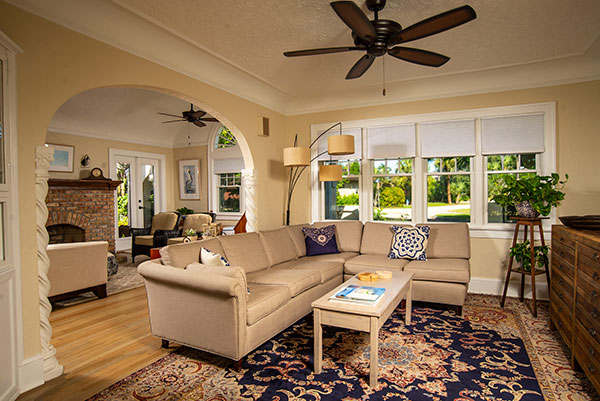 Separating the family room and living room is an archway adorned with two plaster columns in a spiral design known as the Bernini column, inspired by Italian artist Gian Lorenzo Bernini’s bronze columns over the altar of St. Peter’s Basilica in Rome.

“The previous owners had plans made for a second master bedroom and bath,” Jan adds. “They decided against it, since it would take away from the original charm. We feel the same way, although there are times when we could use another bath.”

At 1,000 square feet, the two-bedroom, one-bath house is relatively small by today’s standards, but more than adequate as their second home. “It’s the right size for us and I don’t want to change it,” Dan says.

Separating the family room and living room is an archway adorned with two plaster columns in a spiral design referred to as the Bernini column, inspired by Italian artist Gian Lorenzo Bernini’s bronze columns over the altar of St. Peter’s Basilica in Rome. Similar Baroque-style spiral columns were also used in the design of the 1927 Lyric Theatre in downtown Stuart.

The living room and family room contain sofas and tables in neutral colors that harmonize with the home’s original details. The lighting fixture over the antique wood farm table in the dining room matches the sconces over the fireplace mantel and elsewhere. Though new, the lighting fixtures are designed to resemble those from Thomas Edison’s day. Other striking elements in the living room are the vaulted ceiling and large brick fireplace.

Richly patterned oriental rugs throughout the home add color to the neutral palette. Chairs in the living room, upholstered in Floridian-looking fabric patterned with turtles and crabs, also add interest and color. An antique iron bed Jan purchased from a shop in downtown Stuart is the focal point of the guest bedroom. Over it is a metal chandelier.

The master bedroom has a gently angled bay window that dominates the front elevation. Because bedrooms in older houses had small closets, and sometimes no closets, an armoire in the room provides extra space for clothes and
other items.

Though small, the newly remodeled kitchen is well designed for high efficiency. A Thanksgiving meal could easily be prepared in this kitchen, and that’s what the family intends to do. Their son loves to cook, and the amateur chef gave the kitchen his seal of approval.

The kitchen opens to the living room, which makes it appear larger. A surprising amount of cabinets are in a kitchen of this size, and there is a generous amount of marble-topped counter space. The back of the stove is finished in white subway tile and has a handy faucet with a long adjustable arm for filling pots with water at the stove instead of the sink.
Behind the kitchen is a small pantry. A former linen closet now houses a washer and dryer. The house has a detached garage and a newly installed tankless gas water heater that is one of Dan’s favorite additions to the house. 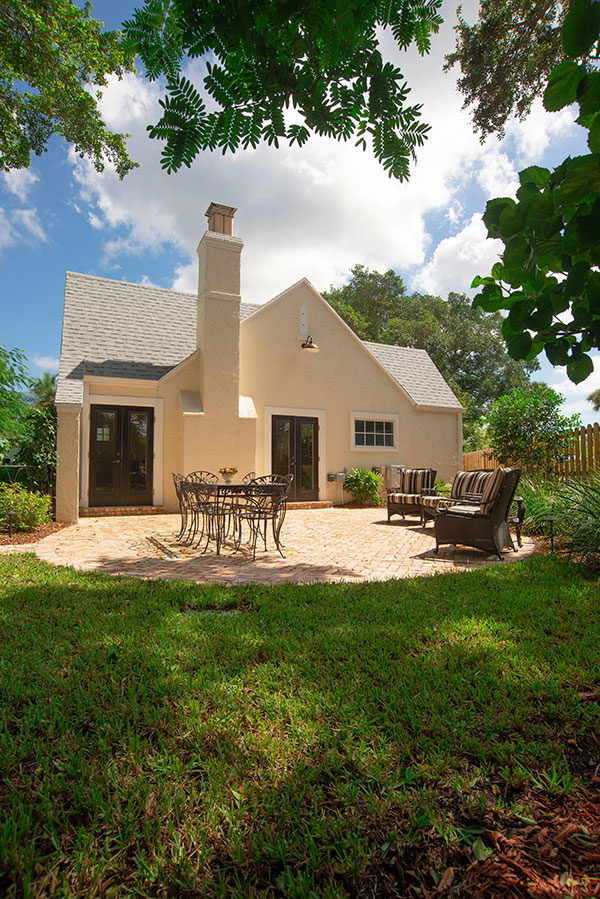 Another prominent feature in storybook architecture is the old English-style chimney. Renovations by the previous owners include the courtyard in back and the patio in the front, both paved in Old Chicago brick.

The stucco storybook-style house was likely designed by architect George L. Pfeiffer of Pfeiffer & O’Reilly, a Miami firm that opened a Stuart branch office in 1925 when St. Lucie Estates was formed. His partner, landscape architect Gerald O’Reilly, approved the building designs for St. Lucie Estates when it was a new subdivision and he served as Stuart’s city planner.

Pfeiffer also designed the Crary House, another storybook-style house that was originally located in St. Lucie Estates. It was purchased in 1928 by Evans Crary Sr., speaker of the state House of Representatives and a state senator. Slated for demolition in recent years, it was purchased by the city of Stuart and moved to Flagler Avenue and is now an office of U.S. Rep. Brian Mast.

The couple’s main home is in Hendersonville, North Carolina, overlooking a golf course and the Blue Ridge Mountains. Jan enjoys the change of seasons but notes that winters can get dreary.

Dan grew up in West Palm Beach and has family in the surrounding area, including Jupiter and Tequesta. He was a Navy pilot when he met Jan in 1972 and then had a 31-year career as a pilot for American Airlines. After retiring from the airline, he was a pilot for a Saudi prince and now works part-time for Boeing in Miami, teaching other pilots how to fly the Boeing 777 and 787 aircraft.

“Our main pull to Florida is family,” Jan adds. “Two of our four children live in Stuart, very close to us, and they have five of our grandchildren between them. It’s such a gift and joy to share in their lives. Now we just have to convince our other two children to move down to Stuart with our four other grandchildren.”