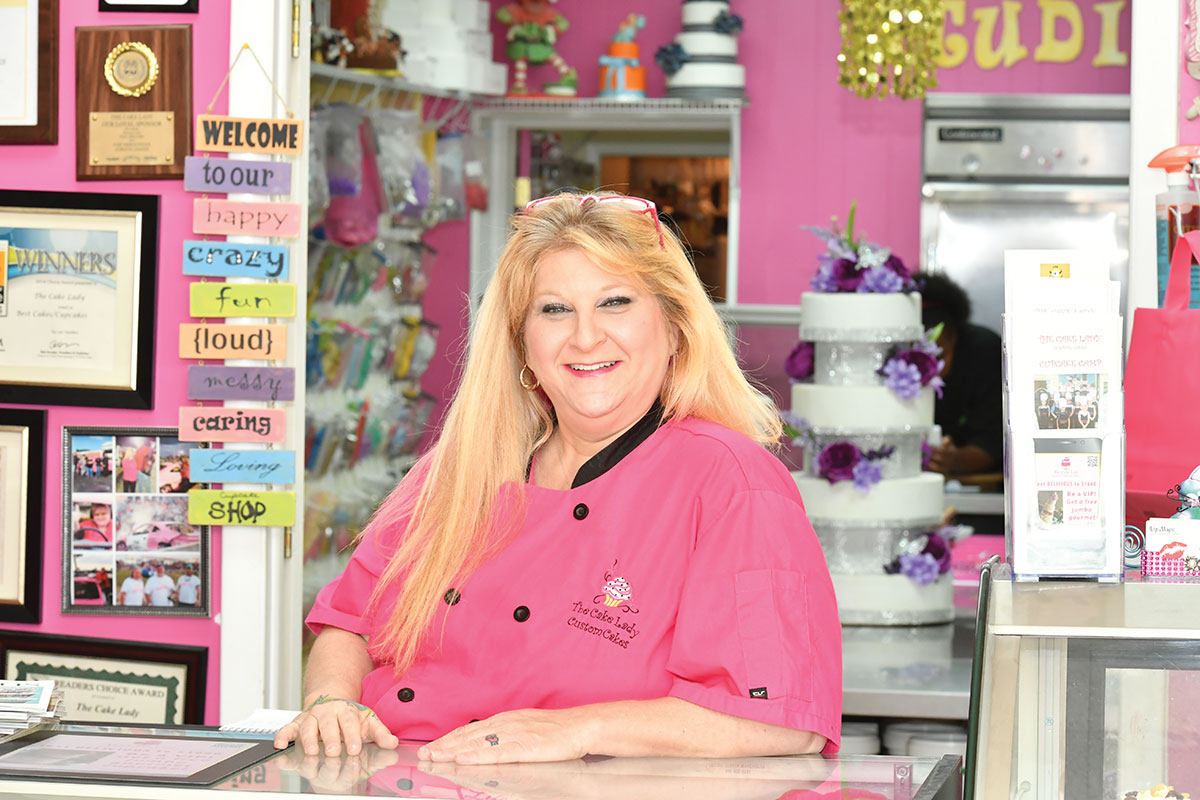 If your idea of cake decorating is placing little letters that spell out Happy Birthday on a baked confection and maybe adding a couple of flowers fashioned from icing, then you’re in for an education at The Cake Lady bakery in Fort Pierce where you’ll find a whole new dimension to desserts.

Owner Staci Dunn bakes and decorates custom cakes and gourmet cupcakes for all occasions, including birthdays, weddings, holidays and anniversaries. She offers 80 flavors, from butterscotch to mango madness, cinnamon apple, numerous combinations of chocolate and much more.

But the icing on the cake, as it were, is the decorative element. Dunn can make a cake look pretty much like whatever the customer wants.

“I did an airboat,” she said. “I did a shark. I’m doing a sea turtle this weekend. We just carve it up and then we ice it.”

Then, using an edible icing called fondant, she fashions the decorations for the top of the cake. She has a wide array of molds, so whether you want likenesses of starfish, racing flags, a garden scene, cartoon character, Easter bunny, Uncle Sam, Dorothy’s ruby red shoes from The Wizard of Oz, or any of countless other items, chances are good that Dunn can fulfill the order.

One of Dunn’s special cakes is expected to be featured on the Food Network’s Cake Hunters in the spring.

She and two other bakers had a design challenge to come up with a cake for a Boynton Beach boy’s bar mitzvah. The boy is an accomplished piano student and an athlete, Dunn said.

“The family came here and the production company (for the Food Network) came here,” she said. “The drama was in the family. One part of the family wanted an elegant cake, and another wanted a whimsical cake.”

Dunn designed her cake to look and even sound like a piano.

“When you cut the cake open it had piano keys and it played music,” she said. “We attached a music box, which played Beethoven’s Fur Elise. It was a great cake and a lot of fun.”

She said the Food Network crew did 16 hours of filming for what will be a segment of about seven minutes when it is broadcast. She plans to host a viewing party at the bakery when she finds out when the show will air.

Dunn did not learn how to bake by helping her mother in the kitchen.

“My mother was not a cook or a baker,” she said. “It’s something I did with my children, to have quality time with them when we were homeschooling. When they needed a break, we went into the kitchen and made cookies or cakes or brownies.”

She has never forgotten her first cake.

“It was for my son’s third birthday,” she said. “I made a Poke’ ball cake out of a regular cake. When it was finished, it was round. I didn’t know how to make a ball cake at that time. It was ugly and horrible.”

Despite its shape, her son loved his mom’s first cake.

“He went crazy over it,” she said, “and I got better over time.”

The cake for a bar mitzvah cost $3,000, but a wedding cake she’s going to do might be the fanciest yet. It will have five tiers, with a gazebo and fountain, and will cost $5,000.

“People want their cake to be memorable,” she said. “They want people to talk about it and say, oh my gosh, I love that cake! I don’t think I’ve ever done a plain white cake, but if I did, it had some amazing filling, like passion fruit.”

Dunn teaches cake decorating to students from St. Andrew’s Episcopal Academy and also offers cupcake camps in the summer. For adults interested in honing their cupcake decorating skills while socializing with friends, Dunn offers “Girls Night Out,” a private party at the bakery for groups of six or more.

The bakery is equipped with a large convection oven that allows air to circulate so that 288 standard cupcakes can be baked at one time. An entire wall is filled with cutters and molds and 252 baking pans are stacked on shelves.

“We have some very good ingredients and we take a lot of time,” she said. “If something is undercooked, I’ll throw it out. We do everything fresh and I think that’s really the secret. If you have a wedding on Friday, we won’t bake your cake until Thursday.”

Professional background: Worked as a legal assistant in Broward County for 15 years, then ran a medical transcription business at home for 10 years while homeschooling her children. This is her fifth year operating The Cake Lady bakery in Fort Pierce.

What I am proudest of: “My children.”

Something most people don’t know about me: “I drive in a demolition derby.”