A team of four separate partners came together and fulfilled a mandate: create an elegant Sailfish Point residence with a touch of Texas flavor built in.

The project was a new construction home for Diana and Randy Hoover who were moving to Stuart from Houston. They were interested in a home structured for outdoor as much as indoor living.

The Hoovers chose Gary Kelly of Kelly & Kelly Architects to design the home and Scott J. Holmes to build it. Kelly recommended Kerry Allabastro of Allabastro Designs for the design and decorating. Her imaginative approach helped realize the Hoovers’ mission to incorporate special art and furnishings from their Texas home. They broke ground in May 2017.

“Everything was built from the flooring all the way up to paint colors,” Allabastro says.

DESIGNING STYLE
One of the home’s most appealing aspects is the sense of practicality that never allows the design to lose its extraordinary style. Design ideas such as including a mudroom with a seating bench and coat pegs and a laundry room with a TV and extensive cabinet storage. While the home was under construction, the Hoovers were condo-dwellers.

“Living in the condo, we realized we needed lots of space to store things,” Diana Hoover says. “And, it’s always easier to fold laundry while watching TV.”

The exquisite architecture and design of the home is bolstered by the vista from the corner lot, majestically overlooking the 17th green at Sailfish Point Golf Club.

“Diana and Randy brought photos of their home in Houston,” Allabastro says.

The pictures revealed the clients love of the outdoors. Utilizing the interconnecting pieces of art and furnishings became job No. 1 for Allabastro and, armed with visual references, the designer went to work.

For the architect, access to outdoor spaces was also a central theme. From the welcoming façade to the back patio, he and the designer worked seamlessly together.

“She’s very talented,” Kelly says. “I think I know most designers, and they’re all good, but Kerry’s got a real flair for proportions and colors.”

WEST TEXAS STONEWORK
Reflections of Texas are touch stones connecting the Hoovers to their roots. Beginning at the exterior entry, stairway pillars, portions of the chimney and the façade were built with Beaver Creek tumbled stone from different quarries shipped from West Texas. The stones’ texture manages to be simultaneously rugged and chic, with a color mix of orange, gray-blue and cream variations complementing the neutral stucco of the rest of the house.

Holmes recalls that building the stonework was time consuming and required placement of each stone, one at a time. It was also a challenge to find tradespeople for the work.

“It’s a dying breed of craftsman,” Holmes says. “I could only find three guys to do the work.”

A piece entitled Maestro by Stuart-based sculptor Don Wilks and a painting by Alan Fetterman, a Pennsylvania artist, anchor the entryway at the base of a graceful staircase. The custom brass handrail lends a golden hue running atop the dark railing and the scrollwork in the railing repeats the theme in the front door grills.

A complement of Emperador light honed marble flooring is a universal aspect utilized in every room, interior and exterior, in different applications in a variety of forms, from polished to tumbled. With off white veins, the cool-colored stone floors coalesce as a solid statement to tie each room together.

COUPLE WITH A VISION
“They wanted a flavor of Texas,” Allabastro says. “Randy and Diana gave me a specific traditional vision, but they wanted to upgrade some of the things and incorporate them into a new design. They knew what they wanted, and that’s easier for me when clients know.”

The view from the foyer sweeps across the heart of the house out to the pool and the emerald golf course beyond, balancing light from the interior to the exterior.

The living room rug, from A World of Rugs in Jupiter, inspired the corresponding custom-designed rugs in the adjoining kitchen. The rugs helped dictate Allabastro’s and the Hoovers’ choice of furnishings and built-ins.

The knotty alder shelving was specifically designed to showcase art work by Younok Kim, an artist whose work the Hoovers have collected. The piece above the built-in TV, along with two other paintings, forms a triad of her work.

RUSTIC KITCHEN
As with all of the carefully thought-out characteristics in the home, this wood element carries into the kitchen. The natural knots in the wood provide texture and the juxtaposition with copper pulls and handles makes for an elegantly rustic look. An island, in off-set gray, is bookended by Enkeboll corbels with carvings of acorns. Above, Allabastro included an eight-light fixture by Visual Comfort set within an open metal frame suspended by dual chains.

The kitchen is equipped with Thermador appliances. And a cast limestone hood is prepped to take the heat from a hardy six-burner stovetop.
Swivel leather bar chairs, and swivel seating in the living room, facilitate taking advantage of the view.

“You’re able to look outside and be comfortable,” Diana Hoover says.

The entire dining room was recreated from the Houston house.

“The architect had to make all this fit in there,” she says.

PERFECT FOR PARTIES
With dramatic double glass-paned doors, the idea was to bring in the light from the adjacent front entryway. With the addition of a coffered ceiling with a new chandelier from Fine Arts, the grand space is a perfect stage for any elegant dinner party.

The exterior living space encompassing a full kitchen, dining and sitting areas and 51-foot pool and spa, fulfills the duplicate nature of the home.

“The house has as many outdoor as indoor spaces,” Allabastro says, noting that the configuration is designed to maximize comfort and entertainment capabilities. “The outdoor space is like a living room.”

Two sets of arched double doors and windows, in between dark mahogany peaked ceilings, establish the space. Looking out from the patio to the golf course, or back into the living room and kitchen, is an exercise in high drama.

The outrigger beam-supports under the eaves is another handsome design element, a touch of dark wood distinction against the stucco.
The furnishings, with easy-to-use outdoor fabrics, couple flawlessly beside the fireplace and built-ins. Randy Hoover sourced a collection of Mexican Talavera pottery from a Stuart dealer, which adds color to the exterior space. The dining table is by Michael Taylor, with a custom-stained teak top over a stone base.

Returning to the interior space, a hallway leads to the Hoovers’ shared office and the master bedroom. There’s an elevator, more of that practicality, but styled up with a grill closure that adds a Parisian feel.

OFFICE BUILT FOR TWO
The office, accessed through glass-paneled arched double doors, features dual desks, facing one another, set near a fireplace with another art piece the couple collected in Texas. The colors in the painting and the carpet carry through to upholstered swivel chairs centered in front of the fireplace with a custom cast-stone mantel.

The theme of the rich mahogany wainscoting panels juxtaposed with clear alder built-in cabinets is in tune with the coffered ceilings, also mahogany, using contrasting white center panels. Easy access to a comfortable outdoor seating area makes this the kind of office that radiates both coziness and luxury.

The dramatic antechamber for the master bedroom contains a basket-weave floor inset, the only variation in the floor tile scheme in the entire house. The circular vestibule has art glass, from the Houston home, centered on a table under an intricately crafted chandelier by Currey and Co., which Allabastro chose for the space. Flanking his-and-her closets frame the area.

In the master, a double crown molded ceiling and custom shelves to display decorative glassware combine with a Houston rug. It’s also the room where a handsome black lab, Jackson, gets his own bed with his name embroidered on it.

The outdoor motif continues in another Kim painting of boats at harbor, and doors from the master bedroom exit to the back patio near a custom fountain adjacent to the pool.

The master bath design statement is manifest in the glass-walled shower with floor-to-ceiling tile and a dolomite, brick-pattern mosaic floor coupled with mystery white marble countertops and black matte-finish fixtures. The cabinetry is the same gray as the kitchen island. The gentility of the room is topped off by a gracefully curved Victoria and Albert bathtub.

SUNRISE, SUNSET
On the staircase to the second floor is an artistic declaration, a 7-by-8-foot Fetterman painting commissioned by the Hoovers. The scene is a boat leaving the St. Lucie Inlet, Sailfish Point at sunrise.

“The artist and I walked the beach, he did sketches and put it together,” Randy Hoover says. Latitude and longitude are incorporated into the painting. “Bahamas bound,” he says.

All the guest rooms are upstairs, as well as a billiard room and sitting area with individual balconies at each end of the room designed for catching the sunrise in the east or sundown in the west. Drama flares in a curved ceiling, a necessity transformed by the architect.

“We had air handler closets and they had thickness so we decided to make a feature out of it and create a widened 3-foot arc,” to house the air handlers. The ceiling modification from flat to curved then peaked has a nautical feel.

“It’s a good transition for the rooms,” Kelly says. “It felt solid, beefy and appropriate for room dividers. We were trying to give it a Mediterranean style. They look structural but they’re faux beams.”

The team effort on the Hoovers’ residence has resulted in a home grand in scale and unique in design, with each detail calculated specifically for the occupants, including a dose of Texas.

Diana Hoover confirms the value of the close working relationship.

“Kerry was great about pushing me to expand my scope, I tend to be more narrow, and she pushed me on it. It was a wonderful partnership.” 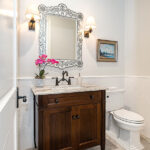 A powder room features stylish touches that match those throughout the entire home. 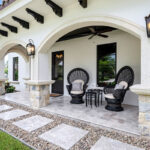 Outside the study, outrigger supports are a distinguishing feature in dark mahogany, contrasting with the neutral color of the stucco. 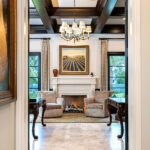 The study features facing desks and color-coordinated furnishings that highlight the art and a warming fireplace. 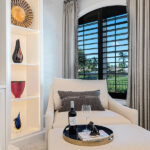 A chaise in the master bedroom is adjacent to built-in shelves that showcase a collection of artistic glass. 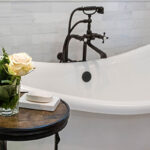 In the master bath, the curved Victoria and Albert tub enhances the elegance. 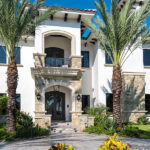 The façade to the home was built with West Texas Beaver Creek tumbled stone by expert craftsmen who placed each stone one at a time.
Please follow and like us: