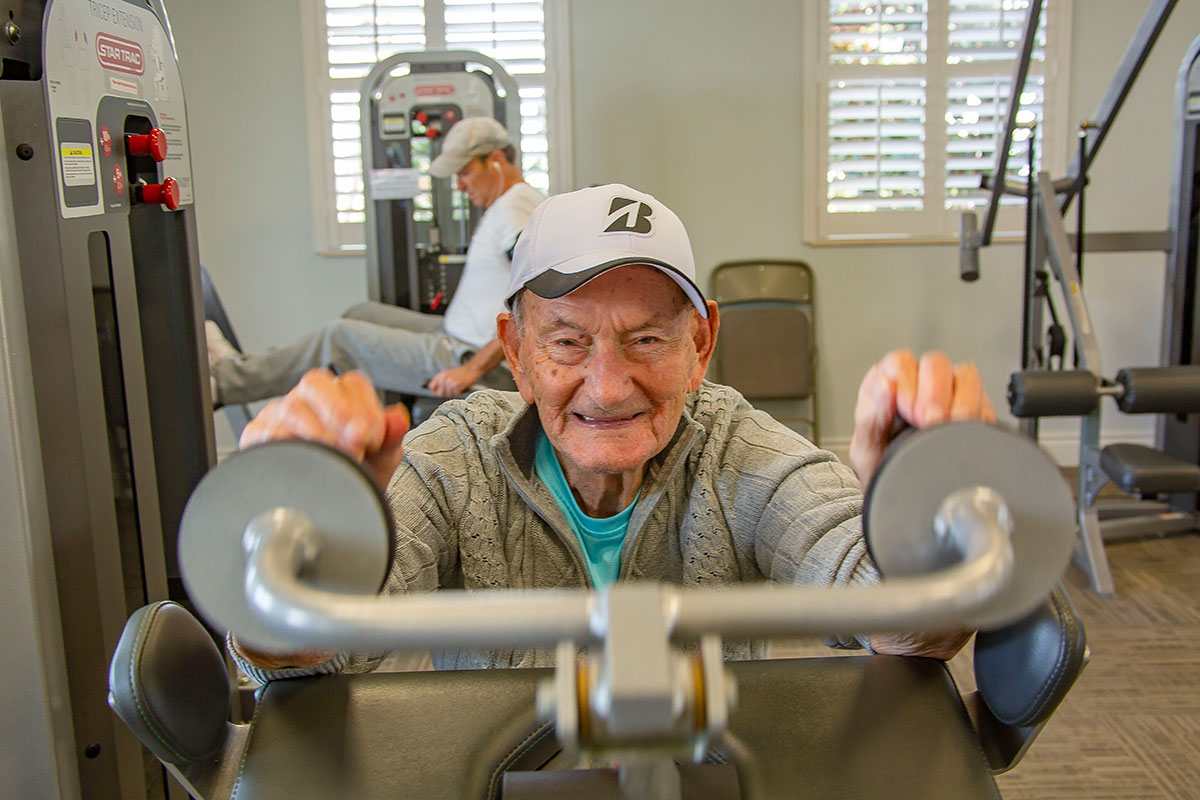 From free weights to machines, in his 100 years Lou Wolfson has seen many changes in technology. He marvels how you can talk into a phone and get the answer to your question in seconds. GREG GARDNER PHOTO

World War I was ending when Lou Wolfson was born in Moscow, Pennsylvania, to two immigrant parents from outside Moscow, Russia.

Still spry at 100, Lou works out three or four days a week at the Verano Clubhouse gym, where his son is a resident. The former chiropractor and physical education teacher is quick to credit those around him for his good health.

“I am here because of the excellent care I get from my son, Marty, and the people at Watercrest and the excellent food they give me,” says Lou. Verano and Watercrest are less than two miles away from each other between Tradition and St. Lucie West.

Hundreds of young children from Gary learned their lifelong swimming lessons from Lou during their summers away from school.

Marty loves to tell the story of visiting Disney’s Animal Kingdom and chatting with a stranger when they realized they were both from Gary. “Wait a minute, ‘What is your last name?’ the man asked. Then added, ‘Your father taught me how to swim.’ “

With a twinkle in his eye, Lou tells the story of a boy born without legs who used to wear braces with shoes, so in a wheelchair it would look like he had legs. “When I taught him how to swim, I thought he was going to scratch my chest with his fingernails, he was holding me so tight,” says Lou, like it happened yesterday.

The boy grew to be a man, beat a drug problem, became a certified public accountant and raised a family, Lou says proudly.

Lou is the youngest and only surviving child of six children born to his father, Morris, who died at the age of 105. Morris was a merchant, junk dealer, shoemaker and gardener, Lou says. He worked many jobs to pay the bills for his six sons and daughters, who would all graduate from college.

Marty says: “My parents were very loving, generous people. They made time for us and they were always involved. Our parents took us to athletic games early on. I played college basketball and baseball, and my parents were at every game. Sometimes they would drive 200 miles and be the only parents in the stands. I’m appreciative of it now, but at the time I thought they were babying me.”

“If I had it to do over again,” Lou says, “I would persuade them (sons) to play single sports like golf, bowling or tennis. Your numbers speak for themselves. And you don’t have to kiss the behind of any coach in order to make the team.”

Married for 72 years, Lou’s wife, Helen, passed away at age 98 four years ago. “My wife always knew what I wanted or needed before I did,” he says.

The picture of health at 100, Lou gets around on a walker with wheels, but he can walk short distances on his own. He gave up swimming two years ago. He played tennis into his 90s and was in a bowling league until he was 95.

Thirty years ago the Wolfsons moved to Florida, and it was 20 years ago that Lou had a pacemaker implanted. His blood pressure would go so low at night, he would get up and run around the block to bring it back up.

During World War II, Lou spent 39 months training as a ferry pilot to fly planes to England. A migraine condition forced him out of the service, with the Army angry at him for not telling them about his headaches.

He is not currently on any medications.

A typical day starts with Lou tackling the cryptogram, jumble and a crossword puzzle before breakfast. He likes to get some sun every day, and he watches sports or goes out with Marty.

“All the players today have so much speed in football, baseball and even tennis,” says Lou, who stayed up until 3 a.m. for the end of the 2018 World Series game that went 17 innings.

“For one hundred and a half, he is still going strong,” says Marty. “He started early caring about his body and what he put into it.”

“Stay healthy and have a lot of birthdays,” advises Lou, who never smoked and has one glass of wine for happy hour every Friday.

Age: 100
Lives in: Port St. Lucie
Occupation: Retired chiropractor, physical education teacher
Family: Sons Marty, 71, and Sam, deceased
Education: B.S., Temple University, Physical Education, and M.S., Physical Education
Hobbies: Working out at the gym and watching sports on TV
What inspires me: “The athletic teams I love, Duke (University), (University of) Indiana and Notre Dame. And I am a big (New York) Yankees fan.”
Something people don’t know about me: “I am a very careful eater. I don’t eat dessert and I never eat seconds.”