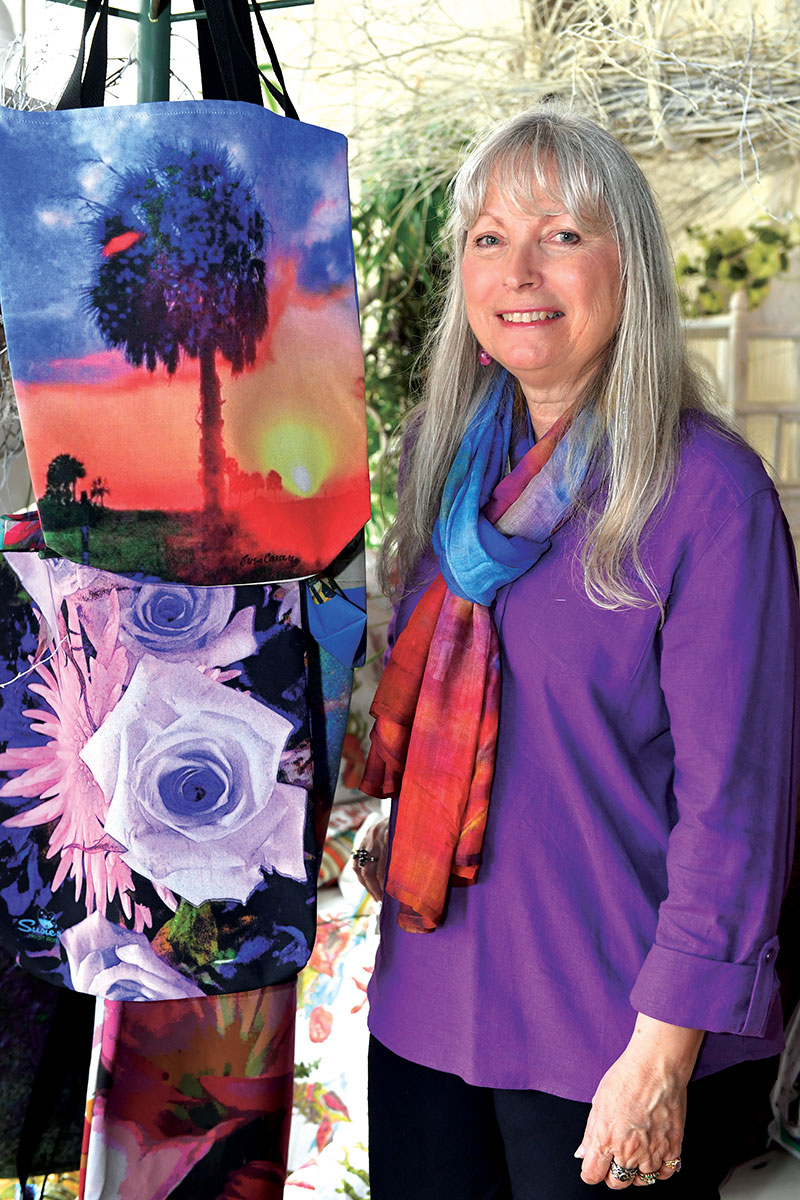 When Fort Pierce artist Susie Cassens was only 8 years old, she started drawing, and her mother took notice. “My mom gave me some art books to draw in,” Cassens says. “And she started taking me to art museums.”

When Cassens was 16, she was allowed to leave John Carroll High School a few hours early and take art lessons with one of her mother’s friends, well-known impressionist Therese Knowles. Knowles was one of a premier group of eight artists known as the Indian River School painters who worked under the auspices of famous landscape artist, A.E. Backus. Under Knowles’ tutelage, Cassens painted landscapes, streetscapes and Florida beaches using oil paints. “We had a good time,” Cassens says. “We hung out at Backus’ home, it was great fun.”

Today, at 60 years old, Cassens remains true to herself as an artist although she has expanded into experimental photography. The Fort Pierce native still focuses on sunrises, sunsets and landscapes, but she digitizes a lot of her art into photographs, which can then be transferred onto different items including pillows and handbags.

“Digital art has allowed me to segue into home décor, which I love,” she says. “A lot more people can enjoy them that way.”

Cassens sells her work primarily at Chic and Shore Things, a home décor store in downtown Fort Pierce. Store owner Becky Demanuel says Cassens’ work is popular with her customers because of its uniqueness.

“Susie is an outstanding artist and she does interesting, different pieces, she doesn’t try to stick to just one venue,” Demanuel says. “Her work is unusual and beautiful, and she’s a great lady.”

Cassens lives in Fort Pierce, where she and her husband Steve brought up their three sons. “It was a great place growing up and a great place to raise a family,” Cassens says. “Growing up here, we had great fun. We had the beach, surfing and also rodeos west of town. My kids had the same.”

Cassens is also part of a citrus grove dynasty. Both she and her husband’s families have been in the citrus business in Fort Pierce for more than 100 years. Her husband is owner of the eponymous Cassens Grove Service, and her father, Louis Forget, co-owns Forget Brothers Grove with Cassens’ two brothers. The Forget family moved to Fort Pierce from Montreal in 1912.

Cassens has always stayed close to home, except when she went to college at the University of Florida and Florida Atlantic University. She studied fine arts but ultimately attained her degree in education because she wanted to return to the small town where she grew up.

When she married Steve and started having a family in her mid-20s, she put down her paint brush for about 10 years. She picked it up again when her youngest son was 3. At the same time, she met another one of Backus’ Indian River School painters, Jacqueline Schindehette, who, like her famous mentor, was a traditional oil painter specializing in landscapes.

Under Schindehette, Cassens honed her landscape painting skills. After working with Schindehette for a few years, Cassens came full circle and started drawing again. She focused on historical buildings in downtown Fort Pierce and people began to collect them. “People also commissioned me to draw their homes,” Cassens says.

In the 1990s, Cassens, Schindehette and another local artist, Sandi Griffin, opened the Brush Strokes Gallery in downtown Fort Pierce, motivated by their desire to promote local artists. That was soon followed by another gallery opening in downtown Fort Pierce, Art Mundo, where Cassens was asked to give art lessons. In addition, she soon began to work with the Manatee Zone, where she promoted artist Jo Ann Holcomb.

“We all helped promote local artists,” Cassens says. “I am very community-oriented. I love to use art to work with people and improve the community.”

s if she didn’t have enough to do, it was around that time that Cassens was asked to chair the St. Lucie County Cultural Council. “I was wearing a lot of hats, but it was exciting and we helped the revitalization of downtown Fort Pierce in the late 1990s,” Cassens says.

Today, Cassens is the new president of the nonpartisan League of Women Voters of St. Lucie County.

“I got involved because my youngest son was upset about the state of things going on in the world,” Cassens says. “Since I was proactive in the revitalization of Fort Pierce and helped with St. Lucie County as the chair of the former Cultural Affairs Council, I looked for an organization that seemed to be making a difference.”

Despite her busy schedule, she still makes time for her art. One of her new favorite artistic expressions is Celtic Creations, mystical paintings of subjects like fairies. “I’m excited about Celtic Creations,” Cassens says. “It’s very different from before, extremely colorful. Kind of magical and whimsical.”

Occupation: Artist; president of the League of Women Voters of St. Lucie County

Who/what inspires me: My children

Something most people don’t know about me: “Not everyone knows I traveled through Europe when I was just 17 with a friend. Also, my mom’s family moved to Fort Pierce just after the war (1946) from England. My grandfather was a building contractor and they came for economic opportunities. My mom (Joan Hutchinson) met my dad (Louis Forget) on a blind date  and the rest is history. We still have close relatives in England and enjoy visiting them and vice versa.”