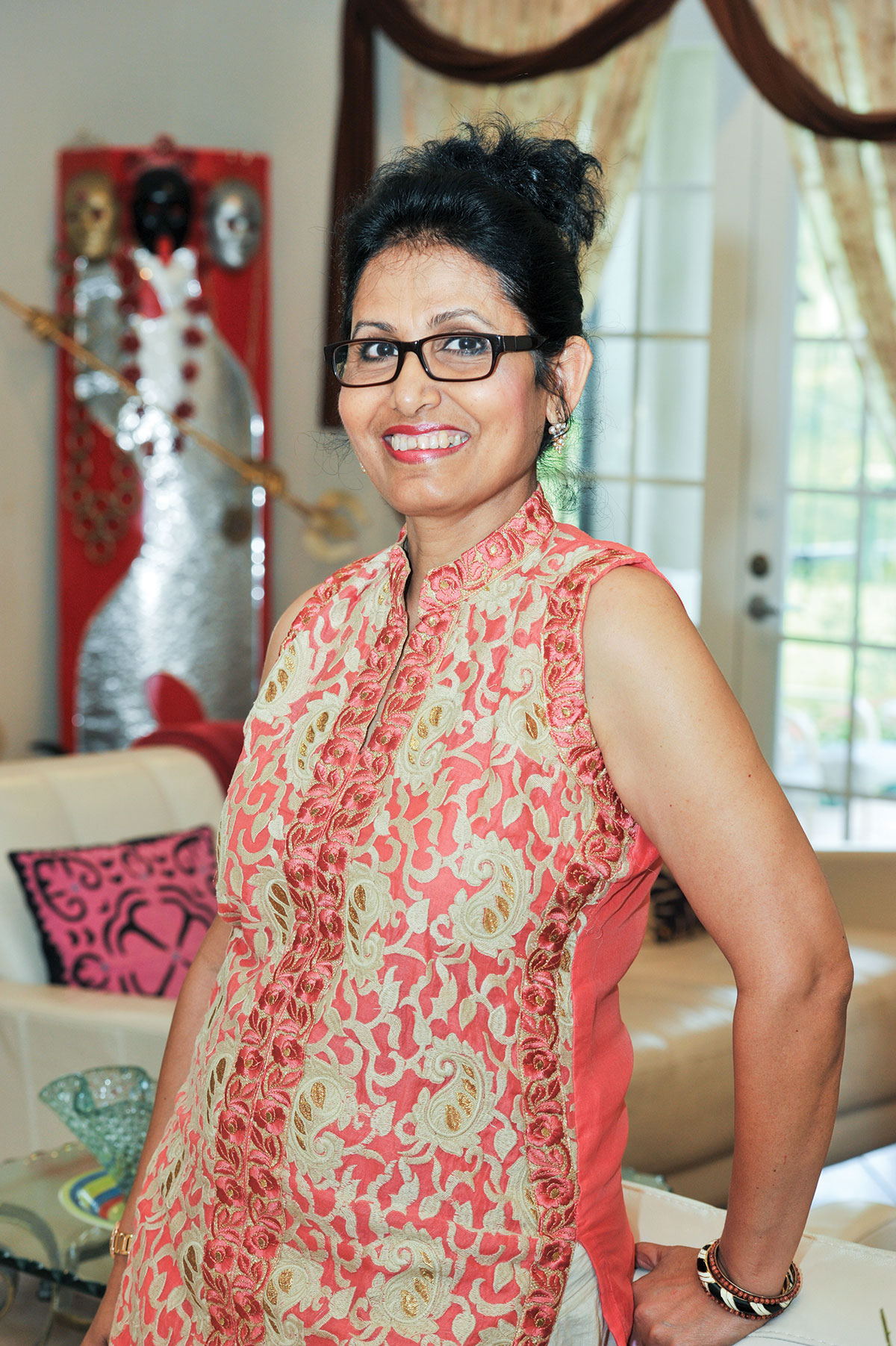 Almost all of Minakshi De’s powerful paintings are of women.

“Women are the symbol of power and peace,” the Vero Beach artist says. “I am not a religious person, but from my childhood I saw all the Hindu temples’ idols are women.”

To understand the fiery passion behind De’s art, you must understand a pivotal experience she had when she was 17. Although born in Kolkata, India, she grew up just across the border in Chittagong, Bangladesh. As a Hindu, De experienced discrimination in the Muslim-dominated country, but it was not enough that would force her family back to India. That is, not until 1975 when the prime minister of Bangladesh was killed during a coup. The country was thrown into chaos and there was a riot in her Hindu neighborhood.

“Suddenly a bunch of people with swords come to the front of our house and said ‘This is for Allah,’ ” she recalls. Her father shouted to De and her four sisters and brother to hide. “My father held one knife and told us to go under the bed. And I’m thinking how my father thinks he can handle all of those men?”

Thankfully, the men did not push their way into the house and the family was safe. But the experience had left its mark. “My father said ‘no way are all my daughters going to get raped’ and he decided that night to move to India.”

That traumatic experience has infused much of De’s paintings with social messages about the violence caused by the misuse and abuse of religion, all religions at one point or another, throughout history. Her painting, Puzzle, is a good example of this. It depicts a woman with a pained expression who has a chime on her forehead. In the center of it is a coin and next to it an army tag and on either side religious signs including the Star of David, a Christian cross and a crescent moon of Islam.

“She wants to balance all the religions but she can’t so she’s like ‘Oh my God, what am I going to do?’ ” De says. “All the religions she holds around her head, they are choking her and all the pieces of the puzzle are falling and she can’t fix all the puzzles in the right position.”

As De explains Puzzle, she shakes her head in despair.

“When someone is sick and needs a blood transfusion you don’t care who is the donor, what religion they are, because you need blood to survive and it’s exactly the same blood,” she says.

Another artistic theme grew out of her volatile experience in Bangladesh, migration. “I had to move to find safety,” she says. “And that voyage, that migration went into much of my art.”

De remained in Kolkata into young adulthood when she met her husband, Niladri. When he wanted to study in the United States, they moved to Dallas where their son was born. After five years, they returned to India to care for her mother-in-law and remained there for several years. During that time, they had a daughter.

Eventually, the family returned to the states to live in Miami where the couple’s son and daughter attended the University of Miami. They moved to Vero Beach after visiting a friend who lived in the seaside village. “I fell in love with Vero because this town is for artists,” De says. “So I told my husband that this was sent to us from God because I love the ocean and it’s so lush, and we decided to move here.”

The couple found a beautiful house where De has a studio and where many of her acrylic paintings decorate the walls. She also has found a very supportive artistic community including the Vero Beach Art Club.

De has added installations to her repertoire and one of her most fierce, powerful installations is called Women, Respect, Love and Peace. It’s the faces of two Hindu goddesses and one human female face. De was inspired after she read a 2012 news story about an Indian girl in South Delhi who was brutally gang raped by six men in a bus during the middle of the day. The girl died 13 days later. “I couldn’t sleep or eat for days after I heard about this poor girl,” De says.

To express her anguish, she turned to her art and created an installation of three female faces. The center one with a black face and tongue sticking out menacingly is Kali, the Hindu Goddess that destroys evil forces and manifests positive change and protects and empowers girls and women. Kali represents the powerful aspects of the Hindu goddess Durga, the principal form of all goddesses. Durga is the gold face on the far left of the installation. The silver face on the right of the installation represents all females. “She is usual, a girl like us,” De says. “We are all that girl on the bus.”

De’s sense of social justice has inspired her and some fellow artists to recently launch Divine India (DivineIndiaart.org), an organization dedicated to funding nonprofits in India that help impoverished children. The Divine India artists, who are of Indian origin, raise the funds through the sales of their art at curated shows including an upcoming show on May 22 at the Doubletree by Hilton Grand Hotel Biscayne Bay in Miami. It is called Rational Imagination - Perspectives on Indian Art.

While focused on India, Divine India is also open to funding local organizations. To that end, it held its first fundraiser, an art show in Jupiter, this past fall and raised $1,000 for Hibiscus Children’s Village in Vero, a group home for abandoned, neglected and abused teenagers. “We are committed to helping children wherever they are through our art,” De says. “It’s so important to us, to me.”

Who inspires you: “My children. They are my biggest critics, but they help me when I’m stuck. And my husband is always supportive. My whole family is involved. They know when I’m depressed or when something is happening and help me with my art.”

A hobby most people don’t know about: Gardening