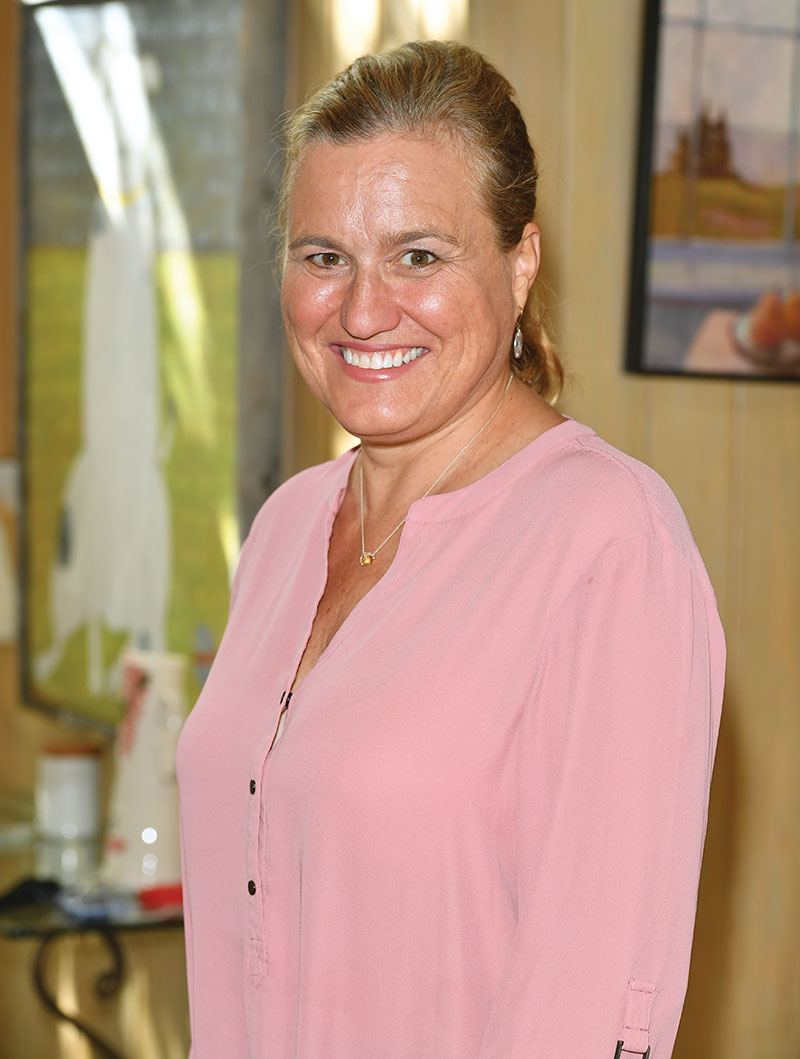 It’s been a whirlwind fall for Leslie McGuirk, published author, astrologer, corporate speaker and TED Talk speaker. On Sept. 13, her new book, The Power of Mercury, was published by HarperCollins. Two days later on Sept. 15, McGuirk gave a TED Talk in Hollywood, Calif. on The Importance of Being Wrong and got a standing ovation.

TED is a nonprofit organization that is devoted to spreading ideas, usually in the form of short, powerful talks. It began in 1984 as a conference where Technology, Entertainment and Design converged, and today covers almost all topics — from science to business to global issues — in more than 100 languages.

She adds that giving that TED Talk was one of the most difficult things she’s ever done.

“The instant I finished speaking, I ran off stage,” McGuirk says. “I missed the standing ovation. More than 50 people came up to me afterward, saying my talk was a life-changer. But, I was so nervous, I have no memory of anything I said.”

At midnight, she gave George Noory, host of Coast-to-Coast Radio Show, a live two-hour interview. Their talk circled around all things McGuirk: Why it’s time for an astrology book about the planet Mercury; what it’s like giving a TED Talk to 600 Hollywood sophisticates; and her 28 years as a children’s book author and illustrator with international sales of more than 2 million books. Plus, McGuirk regularly gives creativity seminars for organizations such as AARP and Rancho La Puerta, a premier spa destination in Mexico.

While life isn’t always this hectic, McGuirk is known for her perpetual motion, always immersed in multiple projects.

So it’s surprising that someone so successful takes her inspiration from the most unlikely of sources – failure – years of it. Yet, that was the subject of McGuirk’s TED Talk.

“I never thought I had any talent when I was growing up,” McGuirk says. “I didn’t know I was creative. I was 19 before anyone recognized I was a creative person.”

Sadly, McGuirk suffocated her natural talent as an artist and writer when she was still in elementary school. In The Power of Mercury, McGuirk writes, “In my heart I always knew that I was creative, but a series of cruel grade-school teachers made me think otherwise.”

The first person to tell McGuirk she was extremely creative was an astrologer in New York City’s Greenwich Village. It was a meeting that would set the course for the rest of her life. McGuirk, who was 19 at the time, was skeptical but went at her mother’s insistence.

“This astrologer was, surprisingly, the daughter of an elegant older couple who lived in our WASP-y hometown of Bronxville, N.Y,” she wrote.

Once McGuirk reassured herself that this astrologer was trustworthy, she listened.

McGuirk says the astrologer redirected her life in a 90-minute reading. This expert guidance saved her from many difficult times. McGuirk notes that when each of us does what we’re meant to do, our lives are much easier. She realizes that many people equate horoscopes with tarot cards and tea-leaf readings. While we can never fully understand it, McGuirk says astrology works and it’s definitely not fortunetelling.

“Everything in nature has a design just like snowflakes and fingerprints and we each have a design, too,” McGuirk says. “We are electromagnetic beings and energies are imprinted on us.”

So how did she land those radio interviews as well as a coveted Hollywood TED Talk? She wowed the right people with her astrological acumen.

“I’ve been giving creativity and astrology workshops at Rancho La Puerta in Mexico for 16 years. Unbeknownst to me, the wife of the head of the Hollywood TED Talks was in the audience one day. She approached me, saying I should do a TED Talk and I told her I’d wanted to for a long time. She really went to bat for me and it happened,” McGuirk says.
vWhile McGuirk is an experienced public speaker, this was something different. There are no cue cards or prompters and no podium. You walk out, stand on the red dot and start talking either from memory or extemporaneously.

“It must be on a single point and tied to the theme they give you and take exactly 18 minutes. Mine was Humanity in the Digital Age, ” she says.

For the radio shows, it was slightly different. When McGuirk’s publicist tried to book her, radio producers asked her to prove her stuff. So over the phone, McGuirk got their times and places of birth and did mini-astrology readings — live.

“One producer was so impressed she wanted me to go on the show the next day,” McGuirk says with a laugh.
vAnother night, she was live on the radio station Midnight Ocean. She told the host he had the wiring to be an alcoholic and he told her he was five years dry.

“It works 95 percent of the time if you use it as a navigational tool,” McGuirk says. “Astrology has the amazing capacity to serve like an owner’s manual.”

But McGuirk emphasizes that if someone wants her to be a fortuneteller, they’ll be sorely disappointed.

“An astrologer can only tell you the best way to take what you’ve got and make it what you want,” McGuirk says. “They can’t and shouldn’t predict the future. Astrology can never predict the future because we’ve got free will.”

Enrolled at Sarah Lawrence College in her hometown, McGuirk began to write and draw freely for the first time in her life. Though her teachers appreciated her work, success didn’t embrace her with open arms.

In 1986 when McGuirk was 26, she started her own company, The McGuirk’s Quirks Design Co., which produced an environmentally themed T-shirt line based on McGuirk’s original drawings. Clients included The Nature Co. and Bonwit Teller.

“I was selling T-shirts out of the back of my car in Portsmouth, N.H.,” McGuirk says.

Through a stroke of pure luck, Glamour magazine did a story on McGuirk and her company. Someone from the high-end Japanese department store Takashimaya read the article and contacted McGuirk.

“Somehow, Japan understood me,” she says. “I was like Calvin Klein there. I did all the designs for their new Disney hotel. For someone with no training in art, who was told for years I couldn’t draw, it was quite something to walk into a Japanese hotel and see my designs on the carpeting, wallpaper, bed spreads and curtains.”

Takashimaya has reproduced her environmental designs on 1,500 products.

For the 13 years prior to Japan, McGuirk wrote and illustrated whimsical children’s books with zero success.

“Nada. One book was rejected over 150 times,” she says. “That’s why I wanted to focus on failure in my TED Talk. Most people give up after just a few rejections. If you’re passionate about something, it doesn’t matter if you get rejected. It’s a normal part of the path to success. Whatever energizes you is always worth pursuing because it comes from your core. When success finally comes, you never forget what you went through. It helps you keep everything in perspective.”

Today, McGuirk is an internationally known writer and illustrator of best-selling children’s books and the winner of multiple awards.

Treasure Coast residents know McGuirk’s popular children’s series about the dogs Tucker, Wiggens and her popular, If Rocks Could Sing, thanks to her regular presentations at the Vero Beach Book Center.

It’s ironic that some people assume writing for children is easier than writing for adults. To do it well takes a rare sensibility relying on a fresh eye, purity and often, a sense of fair play combined with humor – all qualities found in McGuirk’s books.

McGuirk starts with a title. Her Tucker series about the friendly West Highland terrier has a different story for every holiday starting with the Christmas story of Ho Ho Ho for Tucker. Thanksgiving is Gobble, Gobble, Tucker. Another dog, Wiggens, has his own series of adventures including Wiggens Learns His Manners at the Four Seasons Restaurant complete with McGuirk’s charmingly fresh and action-packed illustrations of the Four Seasons Restaurant in New York City.

It’s a rare day that McGuirk isn’t immersed in writing and illustrating a children’s book in her sprawling studio in Summer Place. But scheduled throughout the day are her astrology consultations conducted by phone and catering to an international clientele. Each reading takes 90-minutes, is recorded and goes into surprising depth and detail.

In 2001, McGuirk began leading creativity workshops for various U.S. corporations. She gave the keynote address at the AARP Regional Sales Conference in Savannah in 2014, where she addressed a number of questions.

“How do you find original thoughts; how do you stay inspired?” McGuirk asked her audience. “Generally, corporate-types don’t interact with creative-types. I’m from a visiting tribe,” she says.

McGuirk maintains that most people in the corporate world are afraid of creativity so she rarely uses that word. Instead, she talks about how to increase the frequency of having an inspired thought.

“All companies need inspired workers,” McGuirk says. “We have a tendency to turn into adult zombies when we’re overworked and burnt out. The key to success for any company is to keep their staff happy and engaged. You can’t do that without engaging someone’s imagination.”

Along with seminars and workshops, McGuirk’s speaking career has taken her traveling.

“I went on a Silverseas cruise ship to South America to speak to the M. Financial Group,” she says.

As the creator of the Quest for Inspiration Workshop series, McGuirk teaches everyone how to think creatively. Her website says, “In the corporate world, she has…helped thousands think outside the box to achieve positive business outcomes.”
McGuirk wants to devote more time to such workshops while continuing her other ongoing work in writing and illustrating children’s books and astrology.

She has spent two years writing The Power of Mercury. She worries that fewer and fewer people know how to read an astrology chart properly.

“This is an ancient art and I don’t want it to be lost,” she says. “Also, I believe astrology helps us be more compassionate, fulfilled people – if we understand it properly.”

The fact that she’s only writing and illustrating books, giving TED Talks and leading creativity seminars because of the lessons she’s learned from astrology aren’t wasted on McGuirk who considers it a calling.

“For years, I never promoted myself as an astrologer,” McGuirk says. “I prayed that if God wanted me to be of service, He would bring the clients to me. I didn’t have business cards or a website for a long time. The clients have come via word-of-mouth.”

Family: single. “I have two sisters who live in the Northeast. My mother lives in Hobe Sound.”

What inspires me: nature and creative people

Something most people don’t know about me: “I worked with dolphins at Marine Mammal Lab in Hawaii where I helped teach language to two dolphins.”