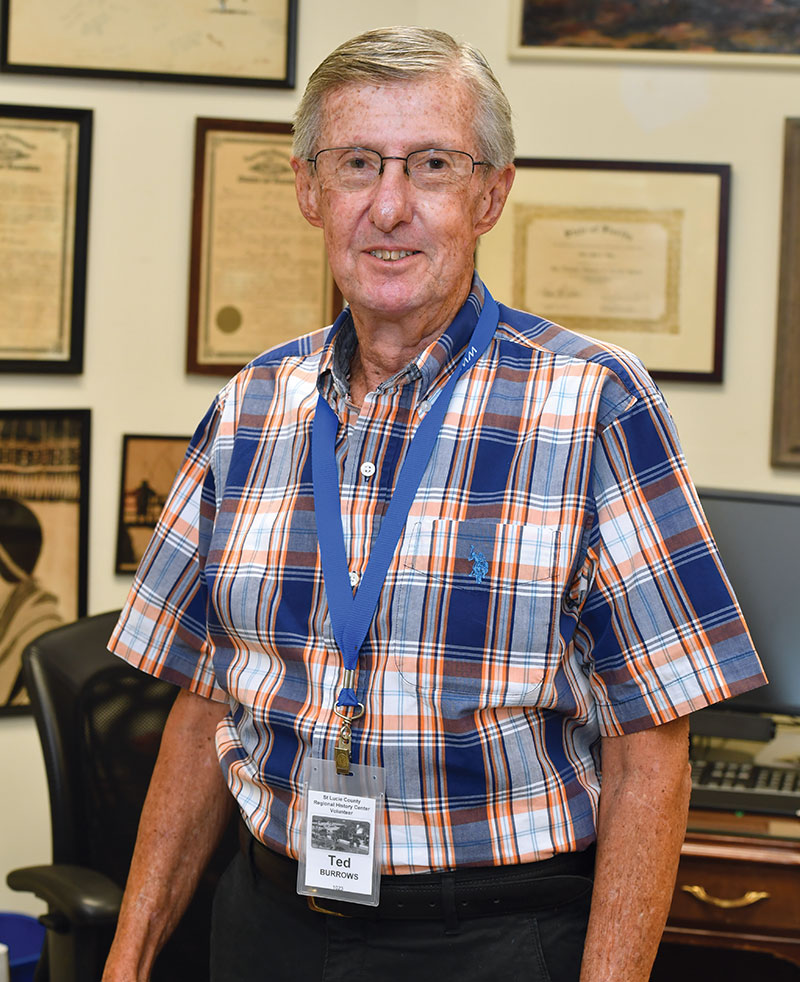 History is a favorite subject for Ted Burrows, a volunteer at the St. Lucie County Regional History Center. The retired newspaperman saw it happen firsthand when he worked at the White House as a communications technician for Lyndon Johnson and Richard Nixon. ED DRONDOSKI PHOTO

Longtime Treasure Coast newsman Ted Burrows had a front row seat to mid-20th century history as it was happening while serving in the White House as a communications technician during the administrations of Lyndon Johnson and Richard Nixon.

Burrows enlisted in the Army in the mid-1960s, and while he was doing basic training at Fort Jackson, S.C., met up with recruiters from a military unit called the White House Communications Agency. They were looking for soldiers qualified for top-secret military clearances to work as sound technicians for the president. Burrows accepted the assignment and for the next four years recorded presidential speeches and news conferences in the Oval Office and around the world, both for the media and the National Archives.

“We were technicians,” he said. “We were background guys. It was our job to provide every kind of communications service the president would need.”

The familiar looking lectern displaying the presidential seal was a vital part of the gear that the technicians set up wherever the president was speaking. The Secret Service allowed only two microphones at the lectern and both had to be provided by the military unit, Burrows said.

The late 1960s in the United States were tumultuous, with rising discontent about American involvement in the Vietnam war and the assassinations of Martin Luther King Jr. and Robert F. Kennedy. Burrows had no problem remembering where he was the night of March 31, 1968, when Johnson shocked the nation by announcing at the end of a speech in the Oval Office that he would not run for another term. Burrows was working in a studio in the West Wing basement when a co-worker walked in. He had set up the president’s speech on the teleprompter.

“He was very quiet,” he said. “We knew something unusual was up, but he was sworn to secrecy.”

When Burrows heard Johnson’s announcement, he said he “almost fell over.”

Burrows said he had little interaction with Johnson, but once, when the president was greeting some White House visitors, he reached and grabbed hold of his hand.

“I think he was saying, OK kid, I’ve seen you around here. I don’t know your name but I appreciate your efforts. I think it was that kind of gesture.”

Not long after Nixon was inaugurated in 1969, Burrows accompanied him on a European trip that included an arrival ceremony outside the West Berlin airport on a particularly cold winter day. Burrows’ fingers nearly froze as he tried to adjust the knobs on the sound equipment. Foreign trips were always more difficult for the sound crew than events in the White House, Burrows said.

“The jobs around the White House were fairly easy,” he said. “There we knew where everything was.”

After a grueling trip around the world with Nixon, Burrows was selected to serve the Nixon family during their monthlong respite at their home in San Clemente, Calif. One night, he and another technician screened a movie for the Nixons, the 1969 hit The Prime of Miss Jean Brodie.

“My friend and I didn’t know anything about the movie, but all of a sudden there was this topless scene, a bare-chested woman in the movie,” he said. “At the end of the movie, we shut down the projectors, turned the lights back up and the Nixons walked right past us. I don’t remember any of them saying a word. It was all very quiet.”

Always the good soldier, Burrows shrugs off personal questions about Johnson or Nixon. He says his political affiliation was “loyal nephew of my Uncle Sam.”

“There were lots of good moments, but it was stressful,” he said. “We were mission-oriented. It had to be done right the first time. The president is not going to repeat a speech just because the sound system isn’t working!”

He has special memories of doing the technical work when such headliners as Leonard Bernstein, Isaac Stern, Henry Mancini and in 1970, the cast of the Broadway hit 1776, performed at the White House.

Burrows moved to Fort Pierce from northern New Jersey with his parents and brother in 1955, when he was in the eighth grade. While attending Dan McCarty High School, he edited the school newspaper, sang in student productions and even read the day’s announcements over the public address system. He graduated in 1960.

“I guess that was the start of my communications career,” he said.

He graduated from Indian River Junior College (now Indian River State College) in 1962, and after serving four years in the Army, completed studies for bachelor’s and master’s degrees at the University of Florida. Following graduation, he worked for UF’s Division of Information Services until 1975 when he left to teach communications courses at Bethany College in West Virginia.

Prior to returning to the Treasure Coast, he also was managing editor for a daily newspaper in Statesboro, Ga. He joined the Stuart News/Port St. Lucie News in 1979 where for 23 years he was opinion page editor and columnist, most of the time.

After retiring in 2002, he made the transition to the spoken word, joining the staff of WQCS, the NPR station for the Treasure Coast, at the invitation of the station manager. Burrows has scaled back his radio work in recent years, but still lends his distinctive voice to announcements and underwriting messages. For that, longtime listeners are happy.

Education: Bachelor’s and master’s degrees from University of Florida College of Journalism and Communications

Who/what inspires me: The wonders of nature

Something most people don’t know about me: “I still have a yellow 1968 Pontiac LeMans that I bought that year for $3,800.”