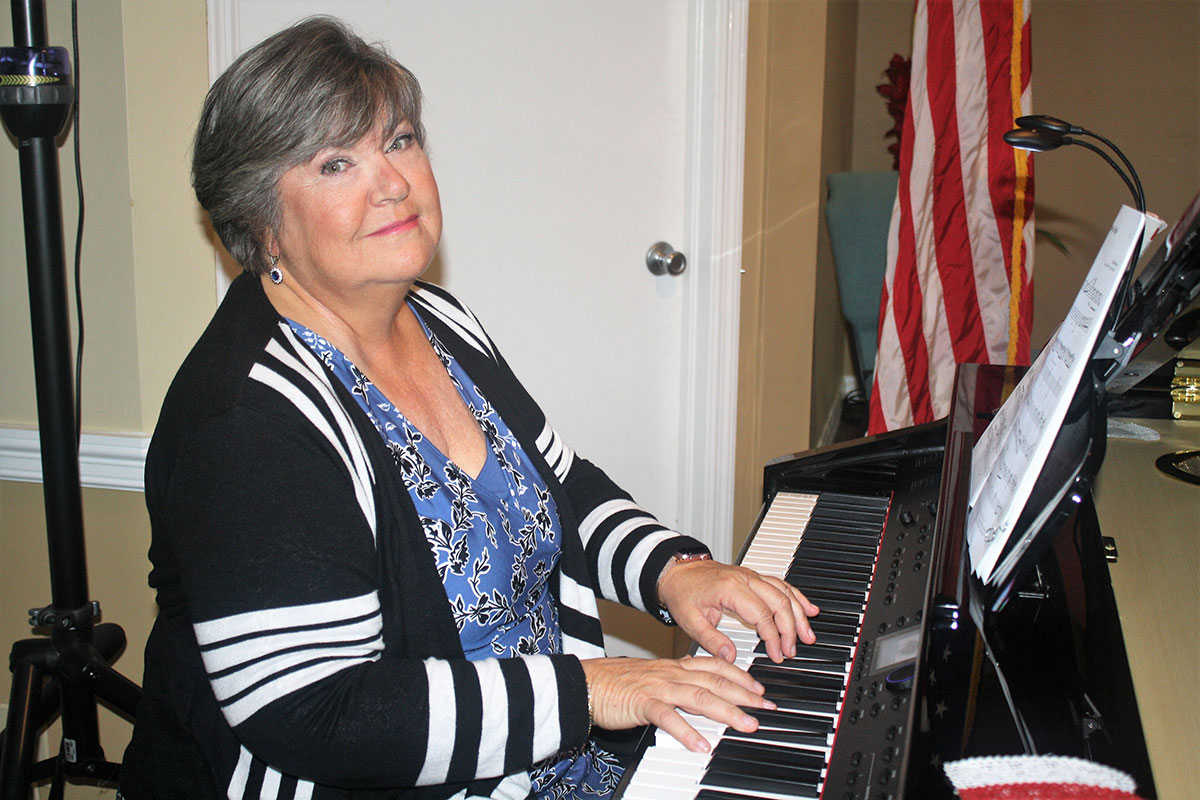 On school days, Joyce Milligan directs traffic at one of the busiest posts in Port St. Lucie. Sundays, she is a church pianist. Whether stopping a truck, playing a song, or crocheting an afghan, her hands are usually active. ELLEN GILLETTE PHOTO

Musical directors are adept at using their hands to signal tempo and volume changes. Perhaps that’s why Joyce Milligan, formerly a music teacher, makes a successful school crossing guard, orchestrating complicated traffic patterns in order to protect the sweetest music of all: children.

Born in West Virginia, Milligan worked at a Dairy Queen during high school, then at her father’s office. She also worked briefly for a film production company in Jacksonville, where she moved after college and marriage in order to be closer to her parents. During her subsequent career as a music educator, she taught music, choir and band in Alabama as well as in several Florida cities.

“I was teaching middle school band in Port St. Lucie and my parents were living with me,” says Milligan. “I changed to elementary music so I wasn’t away from home so much.” Her father passed away in 2011 following complications after surgery. Milligan cared for her mother for the next five years before she also died.

When Milligan retired from teaching, she wanted to do something. Paying a bill one day at the city building, she asked an employee if there were any job openings posted. “She said, ‘No, but if you want to apply as a crossing guard, we’re taking applications.’”

Although crossing guards work outside schools, they don’t work for the school board. Differing from area to area, Port St. Lucie Police Department hires, trains and supervises local guards. The background check is extensive. “They contacted friends whose names I hadn’t given as references, talked to my neighbors, fingerprinted me.”

Jenny Salena is Milligan’s supervisor. “Crossing guards play a vital role in the community. They get to know the kids and can sometimes sense that there’s some kind of trouble going on with them.” And the kids get to know them, too, looking up to guards as extra grandparents or mentors. “All of our guards are excellent,” Salena says, “but Joyce is one of our best.”

Milligan’s posts, which she shares with two other guards on the team, are particularly busy. After working at River’s Edge Elementary School on St. James Boulevard, the team moves just south to Southern Oaks Middle School to contend with a divided highway as well as a single entry and exit system. “The job is not for the timid, or the faint of heart,” says Salena. “Even our officers compliment their work.”

Milligan, who admits she was scared the first time she walked out into traffic, says that bad experiences are a regular part of her week. “Frustrated people cuss at us. We take turns with who gets to go first, and some people don’t like to wait. They can be very juvenile.”

They can also be reckless. Milligan has almost been hit on occasion. “How could they not see me in this neon green vest?” If drivers zip through stop signs or speed through school zones often enough to be recognized, license numbers are reported. The police may go to the driver directly or perhaps station an officer nearby to watch for further reckless behavior.

Students are, for the most part, more compliant. “Once in a while, a student doesn’t want to follow the rules, but the supervisor will talk to the principal or let the student know an officer may show up at his house to discuss it with his parents.”

Like the ancient Persian quote associated with the United States Postal Service, crossing guards sometimes face inclement weather: Neither snow nor rain ... stays these couriers from the swift completion of their appointed rounds. In case of lightning, guards are allowed to return to their vehicles only if no students are present. Before concrete light poles replaced wooden ones, Milligan says she was working during a storm and had just gotten into her car when lightning struck the pole where she had been standing.

Lightning might send Milligan to her car, but spotlights? That’s another matter. When she auditioned for a role in a community theater production of Annie Get Your Gun in 1978, she got the lead. “It was a baptism by fire.” She was also completely hooked.

Over the years, Milligan has served as stage manager, musical director, choreographer and actor in amateur companies as well as performing with a few professional dinner theaters. “I used to prefer musicals, but the older I get, the less I sing. I enjoy acting, though, and working with musical direction.” Local audiences often see her at the Pineapple Playhouse in Fort Pierce or A.C.T. Studio Theatre in Stuart.

In December, Milligan was both musical director and accompanist for A.C.T.’s production of A Christmas Carol. This involved rehearsals and performances after work, fitting in her regular gig playing piano for First Baptist Church in Fort Pierce. “You just change hats,” says Milligan.

As well as that neon green vest.

Age: 66
Lives in: Port St. Lucie
Occupation: School crossing guard
Family: Son and his family live in Stuart; daughter and son-in-law live in Huntsville, Alabama
Education: B.S. in education from Ball State University (Muncie, Indiana); master’s in music education from University of Southern Mississippi
Hobbies: music, theater, crocheting afghans, Native American bead-work (“My father was 7/8 Cherokee, from the Eastern band.”)
Who inspires me: “My dad. He overcame tremendous difficulties and a horrible childhood to educate himself and go into business.”
Something most people don’t know about me: “I was offered a fellowship at Eastman School of Music to pursue my doctorate but had to decline. I couldn’t take two years off from my teaching job. Those pesky things like bills, you know … the finer things in life like electricity, insurance, groceries!”