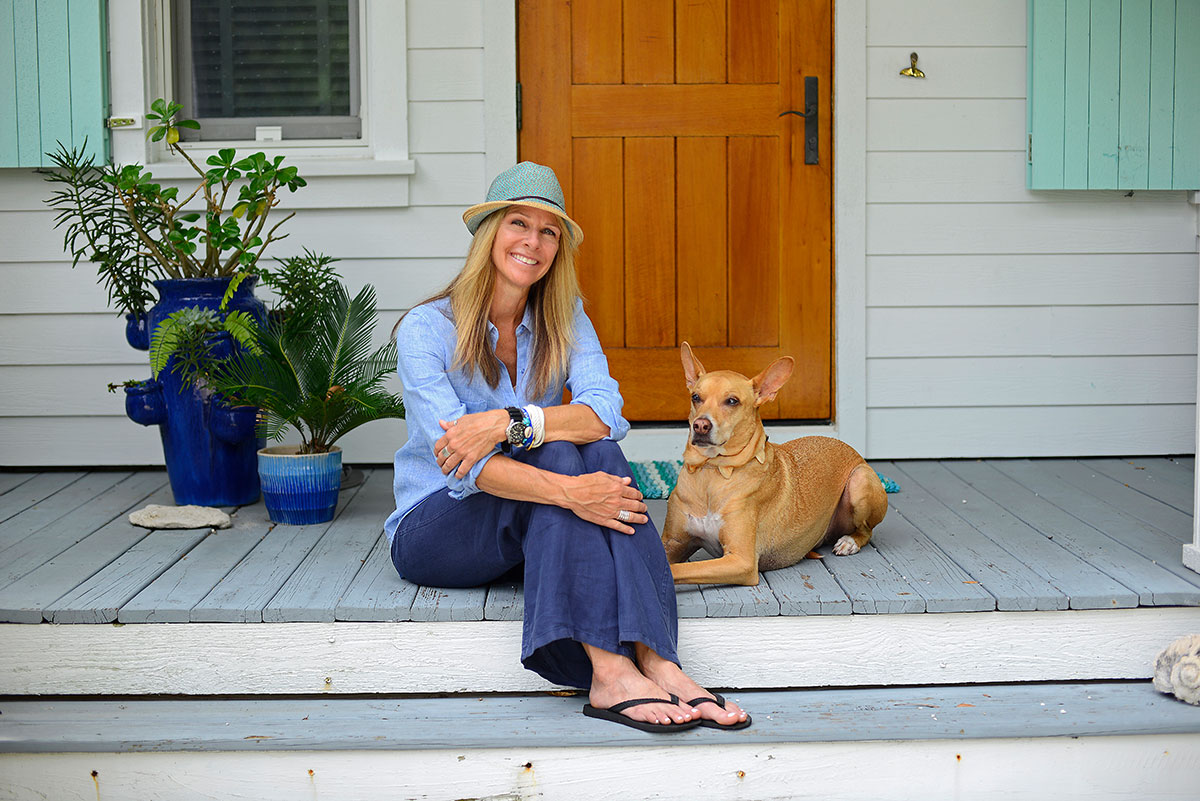 Nicole Mader, a field biologist with the Dolphin Ecology Project, enjoys relaxing at home with her dog, Salty. ANTHONY INSWASTY

For Nicole Mader, going to her job hardly seems like work. It’s almost a mini-vacation. As a volunteer field biologist with the Dolphin Ecology Project, she studies and monitors Atlantic bottlenose dolphins in the southern part of the Indian River Lagoon down to Jupiter Inlet. Aboard the Julie Mae with her dog, Salty, nearby, she carefully photographs and gathers data of those playful marine mammals who can tell us more about the health of our local waters.

“Dolphins are a top predator in our estuaries,” she explains. “They are a great indicator species on what’s happening with our environment. I want to make sure that dolphins have a voice in this area because of the water quality issues we are facing.”

A South Florida native, Mader was destined to spend her life on the water. Her father was a local boatbuilder and former president of the Rybovich super yacht marina and facility in Palm Beach County. During her childhood, she frequently traveled to the Bahamas with her family, where she first became acquainted with dolphins.

“I would see them swimming in those clear blue waters as a kid,” she recalls. “I’ve just always been drawn to them. I actually dream about them. Working with dolphins is all I wanted to do.”

During her early years, Mader fueled her passion for marine life by visiting the Environmental Studies Center in Jensen Beach. Today, she remains actively involved with the organization as a board of trustees member. She also heads their lecture series.

After growing up in Stuart, Mader graduated with a bachelor’s degree in recreation management from the University of Florida. She then interned at the Hawks Cay Resort in Duck Key, where she began fulfilling her childhood dream as a dolphin trainer. She worked there for three years before a freak accident ended her training career. She was bitten by a 500-pound sea lion.

“So, I said, ‘OK, I’m done for a while,’” she says. “I also realized that’s not the way I wanted to work with dolphins, even though I loved my job — interacting with them every day, feeding them and swimming with them. It wasn’t right, because they aren’t supposed to be held captive. They should be out in the wild. That’s what is fair to them. They’re too cognizant to be held in a pool.”

After returning home to Stuart, Mader found a career that suited her better. She worked with Dr. Denise Herzing of the Wild Dolphin Project. She says that Herzing gave her invaluable experience teaching her about identifying dolphins and their behavior, underwater photography, field work and data collection. During those 10 years on the project, she conducted research that included studying 200 Atlantic spotted dolphins that lived along a particular white sand ridge in the Bahamas.
“They lived up on the banks — it’s their home,” she says. “Those dolphins had been known for years by Bahamian fishermen, divers and treasure hunters who frequented that area.”

The field researcher took a hiatus from her work with dolphins to get married and have a family. But the thrill of engaging with marine life never left her. In 2012, a special door opened in her own backyard with the Dolphin Ecology Project, and she returned to the work that she loved.

An estimated 1,000 Atlantic bottlenose dolphins live in the Indian River Lagoon. While some baseline information has been collected by scientists and field researchers locally, there remains so much that we don’t know about them. Mader, who is concerned about the pollutants that are being released into our area waters, wanted to intensify the research being gathered. She wanted to get a better picture of how water quality is impacting these marine mammals.

“Through the Dolphin Ecology Project, I wanted to make sure that the dolphin population in our area stays healthy for the long term,” she notes. “If the dolphins are healthy, then so is our environment.”

In addition to monitoring water quality, Mader collects data on the dolphins and their behavior and she photographs their dorsal fins. The photography must be challenging because she has to capture each dorsal fin at a 90-degree angle.

“Every single dorsal fin is different,” she points out. “It’s as unique as a human fingerprint. Once you get the photos, you can really tell each one apart from another.”
Her experience also tells a story about some of the threats to area dolphins. Mader says that the population is in danger from toxic algae, red tide and the pollutants coming from agricultural lands, canals and Lake Okeechobee.

“When our waters get bad, some think the dolphins just go out in the ocean or move,” she says. “No, not true — this is their home, and they’ll take in anything that comes their way — pollution, toxic algae or contaminated prey.”

Entanglements from crab traps and careless recreational boating are also endangering the species.

“I don’t think a lot of people know that dolphins get hit by boats,” she says. “There’s a lot of boat traffic in the St. Lucie River and Indian River Lagoon. It’s crazy. I have seen a lot of dorsal fins that have been cut off or you can see the prop marks and scars. Some dolphins die by boat hits — blunt trauma. Sometimes they just can’t get out of the way. And that’s why it’s very important that boats slow down and stay in the channel.”

Dolphins have long been known for their intelligence and social behavior. Mader refers to them as “big brains in the water.” She feels that humans could learn a lesson from them about protecting nature.

“What I respect so much is that they live in their own societies mostly under the water, and they live in harmony with their environment,” she points out. “They don’t destroy anything. Think about it. They kill fish to eat them, and occasionally ward off a shark. But that’s it.”

If you’re out boating in the Indian River Lagoon, there’s a chance you’ll see Mader aboard the Julie Mae capturing shots of diving creatures. She says she is living out her dream protecting what she loves — the river and her dolphins.

“I believe that’s what I’ve been put here for,” she says. “I’ve always been intrigued by animals and wildlife. I never get bored with it. Nature grounds me.”