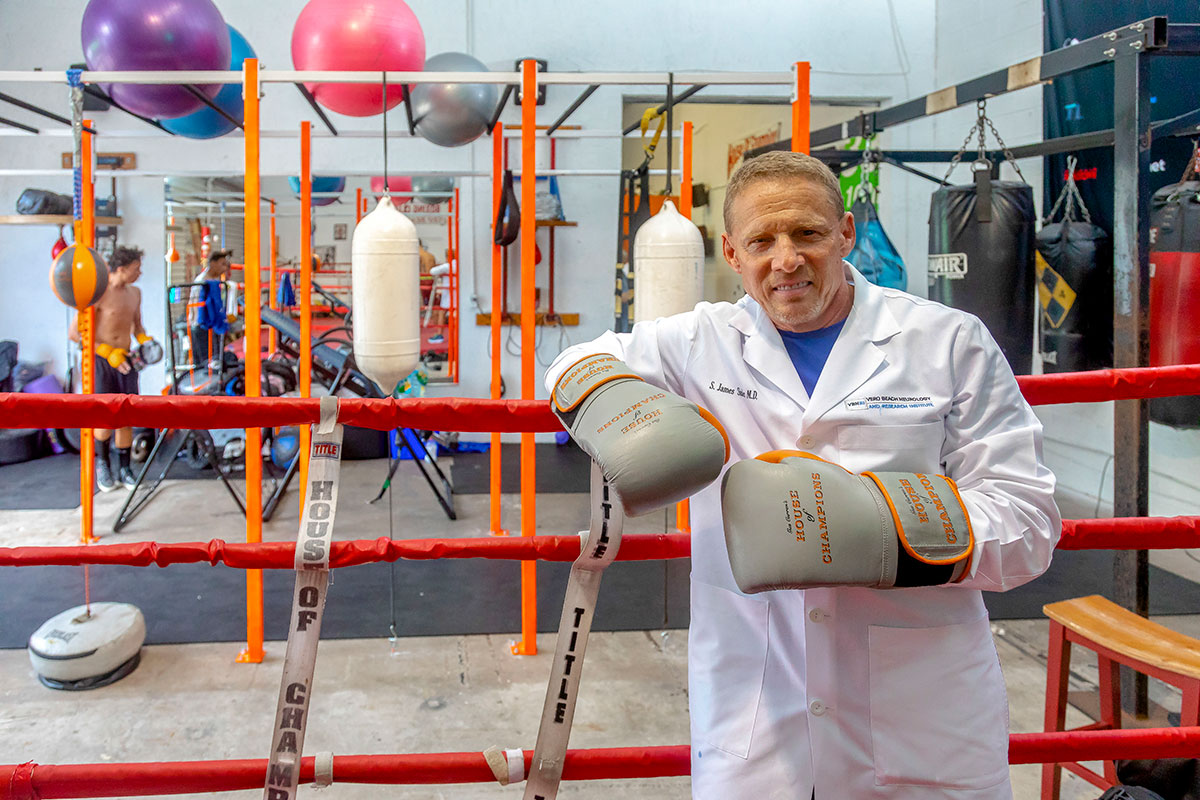 Dr. S. James Shafer has made progress for Parkinson’s disease patients with the art of boxing. It helps them have more control over their lives, physically and emotionally. Working out this way seems to be working out well for these patients. PHIL REID PHOTO

“Fight back” is often the advice Parkinson’s disease patients hear from Dr. S. James Shafer. “Literally fight back,” the effervescent neurologist calls out to them as they work out, punching a stationary bag in the Rock Steady Boxing program at the House of Champions gym in Vero Beach.

“The harder and faster you punch, the more benefit you’ll receive!” says Shafer.

About 20 patients in different stages of the disease show up at the club three days a week to exercise with their unconventional doctor. Some add fancy footwork to their punches, others throw their jabs from a stationary stance and a few pummel from a seated position. “Boxing allows patients to have some control of their life, both physically and emotionally,” Shafer explains. “The rigorous exercise pushes them beyond their limits and helps them maintain their functionality. By focusing on balance and speed, they push beyond the feeling of helplessness and help themselves maintain more functionality.”

Parkinson’s disease is a degenerative movement disorder that causes deterioration of motor skills, balance, speech and sensory function. Studies have shown that these losses are the very same motor skills that boxers train to improve. According to the Parkinson’s Disease Foundation, there are more than a million people in the U.S. suffering from the disease with more than 60,000 people diagnosed each year. Rock Steady is the first program in the country dedicated to the fight against the debilitating disease.

The Rock Steady Boxing program was founded in 2006 by former Indiana Prosecutor Scott C. Newman. Newman, who was diagnosed with early onset Parkinson’s when he was only 40, started boxing workouts and noticed dramatic improvement in his daily functioning. Rock Steady created a program to meet fitness levels at all stages of Parkinson’s, and today there are more than 600 worldwide affiliates serving 3,600 patients.

Gus and Macy Curren opened the House of Champions gym 22 years ago and became certified as Rock Steady instructors about a year and a half ago. They immediately contacted Shafer and approached him with their program. Shafer, a fitness buff himself, was familiar with the method and immediately jumped on board. “Most people equate boxing with the cause of the disease and certainly not with the treatment,” says Shafer. “That’s the beautiful irony of it. Non-contact boxing dramatically improves agility, hand-eye coordination and daily functioning for patients who live each day knowing that they are not going to get better. It’s a brutal reality but boxing lets them fight back!”

Gus Curren adds, “We also have social activities outside of the gym that give participants a sense of comradery and community. It’s a support system unlike any other. They are all literally fighting for their life but laughing and joking with each other on the journey.”

Crawford “Spike” English, 57, was diagnosed with multiple system atrophy, a rare form of Parkinson’s, in 2012 and hasn’t missed a boxing session since the program started. “I love coming to these sessions,” he says. “The workouts have prolonged my ability to move, and I’m going to fight as long as I’m able. Dr. Shafer and Gus are so dedicated and actually work out with us. It’s been a lifesaver for me.”

Shafer, a Vero Beach High school graduate, received his medical degree from the University of Miami in 1993 and completed his adult neurology residency at Shands Hospital at the University of Florida in 1997. He brought his expertise back to his hometown where he currently serves as vice-chairman of neurology and medical director of stroke services at Indian River Medical Center. He has been affiliated with Geodyssey Research, LLC, since 2004, conducting more than 40 clinical trials for multiple sclerosis (MS), stroke, Parkinson’s disease, epilepsy, Alzheimer’s disease, peripheral neuropathy and a wide variety of neurological diseases. He opened the Vero Beach Neurology and Research Institute in 2016 and is the founder and medical director of the MS Center of Vero Beach, started in 1999.

“I’ve conducted many clinical trials and I’m convinced that there is no pill that can produce the same benefits for Parkinson’s patients as Rock Steady Boxing,” he says. “I’ve seen the determination and I’ve seen the results. I’ve had patients who couldn’t walk start the program and become mobile again. The workouts basically wake up the brain and keep the body moving! Giving patients more balance so they fall less is perhaps the biggest plus. Medical treatment is always necessary with a degenerative disease, but I still say fight back!”

What inspires me: “All of my days are good, and it is the courage and will of my patients that motivates me every day. The Rock Steady Boxing is not only physically beneficial to those battling the disease of Parkinson’s, but every minute they are in that gym they are fighting for their lives literally, and for those few hours a week they feel empowered and allow themselves to forget they have this progressive disabling disease. It’s the greatest medicine I’ve ever prescribed!”

Something most people don’t know about me: “I raise chickens!”