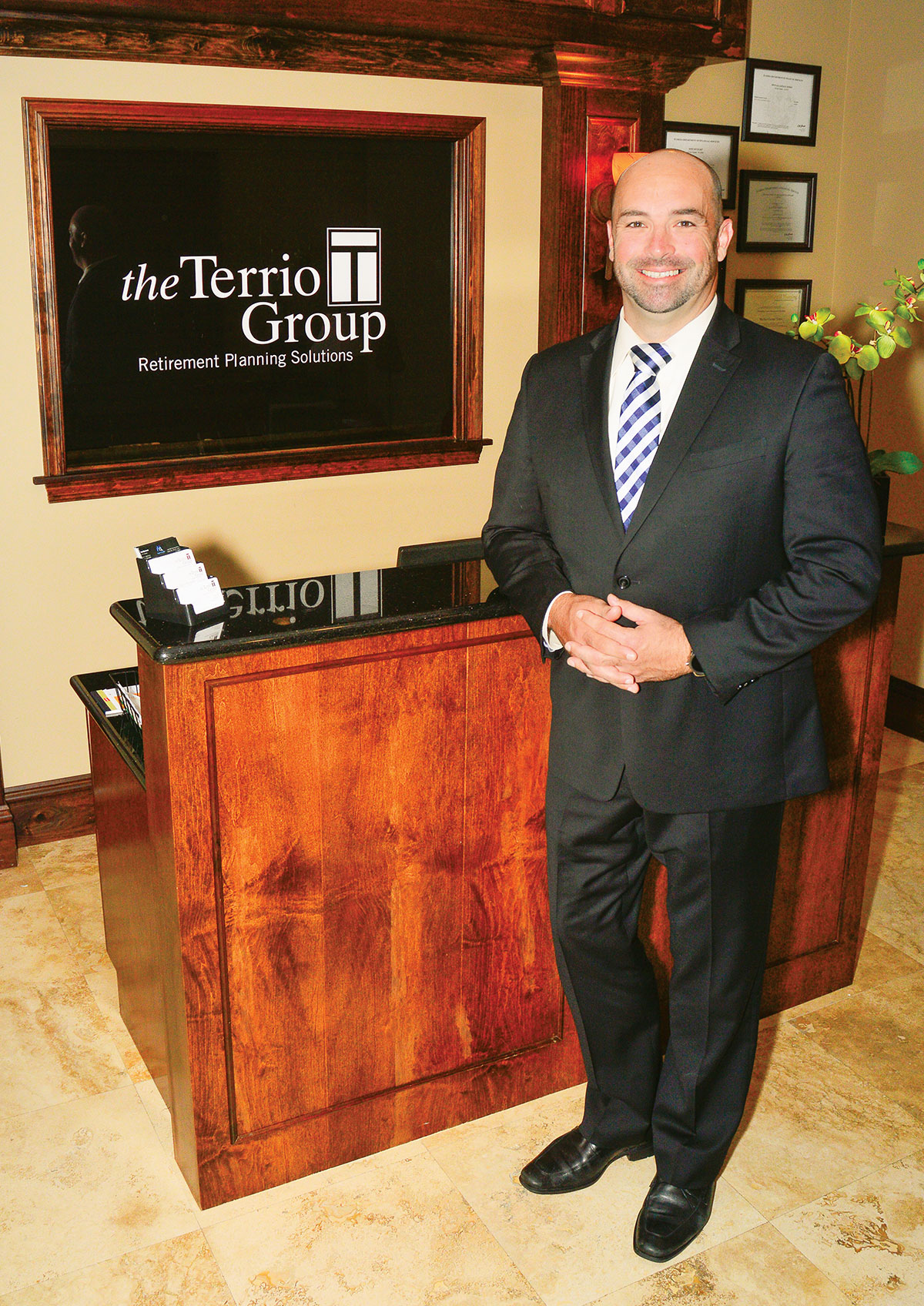 Michael Terrio, CEO and President of the Terrio Group, has offices in Port St. Lucie and Stuart. His strong community support includes the Boys and Girls Club and CASTLE among others. JOHN BIONDO PHOTO

As a young man, Michael Terrio witnessed the crushing effects that left his family in a tailspin following the death of his father at age 53. This life-changing event made him aware of how important it is to plan for a family’s financial future.

His entrepreneurial talent was influenced by his dad, who owned a construction business. Terrio says his father taught him the importance of consulting people, not selling them and how to build a company and team from the ground up.

When Terrio started college, he had three fields of study, including deaf education, which started as an elective language class and turned into a passion. However, he decided that being a teacher of children wasn’t the right career path. Combining his own innate capabilities and utilizing dual majors earned at the University of Minnesota in communication and business, Terrio embarked on a professional track in the mortgage industry.

It was Terrio’s deaf education background that formed the basis of his success as a retirement planning counselor and asset management specialist. His awareness that the deaf speak another language helped him translate complex financial concepts for retirees using visual cues and simple math. His use of the Flintstone Legacy as an example in his Financial Fitness talks adds levity and clarity to subjects like tax-free distributions of IRA accounts.

When he moved to Florida in 2006 from Minnesota, he landed a position as an investment adviser and ultimately bought the firm in 2008. Today he is CEO of the Terrio Group, with offices in Port St. Lucie and Stuart. An independent, registered investment adviser, Terrio is a member of the National Ethics Association and is a contributor to the Wall Street Journal. He can be seen offering advice on WFLX Fox 29 morning news, and can be heard on his local radio program, Absolute Money Management, aired weekly on WPSL1590 AM.

“I absolutely love what I do,” he says. “I am very blessed to make a positive change in people’s lives and I’m always learning from my clients.”

It was four years ago that Terrio had a health-related threat.

“After participating in my first half-marathon at age 35, I visited the doctor for what I thought was acid reflux: Instead, I was given five new arteries,” he says. That experience began to form the core of his practice to structure his days, balancing work and family. He remains active but manages the stress.

“Work days consist of managing client relationships,” he says. “Then I have buffer days when I can focus on growing the company. Free days are for relaxation without digital distractions when I can be with my family.”

Annual spring trips are to Utah for snowboarding and skiing. “Riding the chairlift is the best time I have with my boys — just to be with them and my wife,” he says.

While he looks forward to vacationing in colder climates, the Treasure Coast has come to mean a lot to him.

“This area is a unique place,” he says. “It has a large city atmosphere with a small townie vibe and feel. I love small-business owners because they are people who believe in what they do.”

His varied community interests include co-chairman of the annual Steak and Stake dinner that benefits the Boys & Girls Clubs of St. Lucie County, of which the Terrio Group has been its presenting sponsor. “The B&GC is a great organization that we are proud to support,” he says.

Terrio, who initially contacted the organization with the idea to send children to a ballgame, took a tour of the club in Fort Pierce and realized he had to do more. He agreed to chair its annual golf tournament and has served as a Youth of the Year judge, which led to assisting with its planned giving program.

“What Mike has done has opened the door for hundreds of children to come to us,” board president Nate Spera says.

His philanthropic energy extends throughout the Treasure Coast where he recently performed in Singing with the Stars at StarStruck Performing Arts Center in Stuart. Terrio received a perfect score for best performance with his duet partner, Shelley Keelor, and won the overall top spot in the event that raised more than $40,000 for Artists for a Cause.

His firm also is involved in the annual Marvin S. Cone High School Juried Art Show at the Court House Cultural Center in Stuart. Terrio has also sponsored the 2015 mARTies Awards for the Arts Council of Martin County.

Terrio also speaks at Yellow Ribbon events, helping soldiers en route to deployment or returning from military service to make sound, long-term financial decisions. He sponsors and plays in golf tournaments to support veterans and other nonprofits on the Treasure Coast.

Aging boomers learn from the Terrio Group’s practical approach to financial planning. Terrio’s own terminologies like the Flaw of Averages and glitches in the matrix play on the harsh aspects of not protecting assets from market risks.

His determination to provide a roadmap for sensible investing and equip clients with an action plan parallels his desire to radically change established business practices in the financial services industry.

Something most people don’t know about me: “I was a cheerleader at the University of Minnesota.”