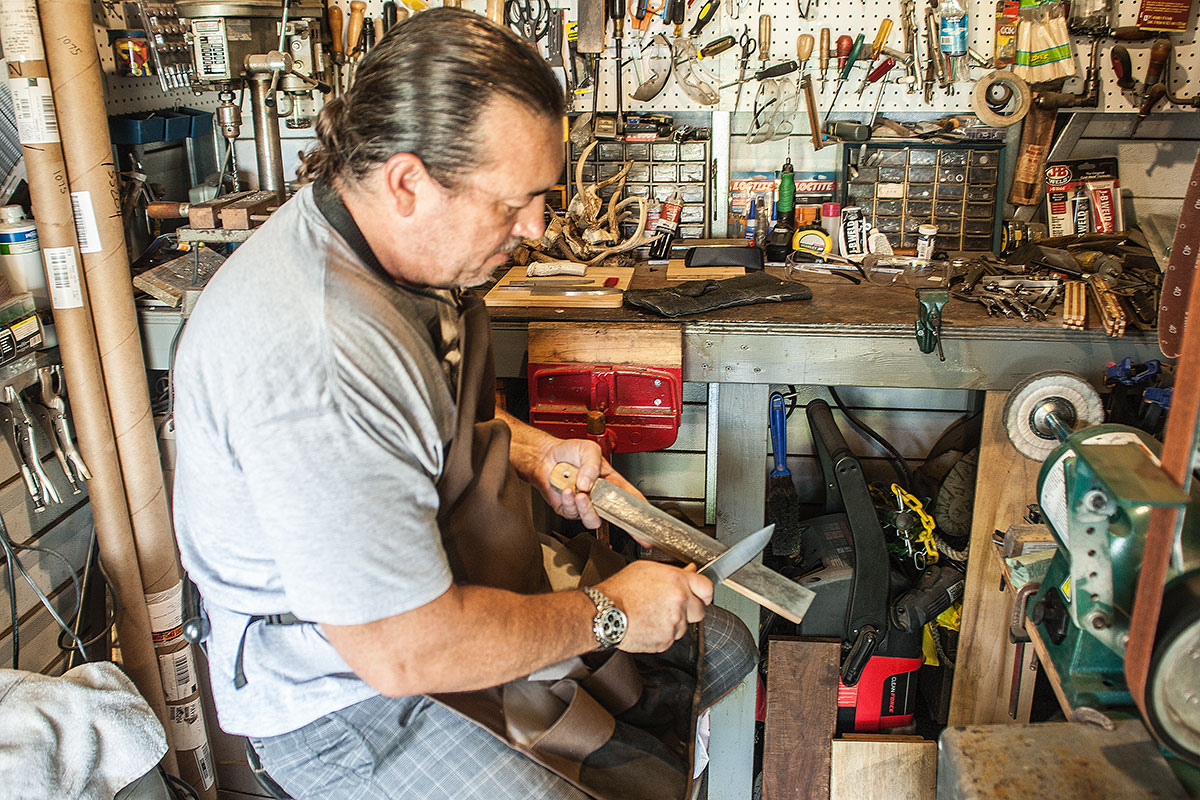 Jeff McCullough uses a file to hone an edge on the blade of one of the unique hunting knives he creates in his workshop. JOHN BIONDO

Jeff McCullough has had a fascination with knives ever since he was a small child. While spending summers at his grandparents’ Port St. Lucie home, he could be found in the workshop using his grandfather’s woodworking tools to create elaborate letter openers.

The McCullough children, Jeff and four siblings, grew up in Miami, and moved to Port St. Lucie in the 1970s. As he grew up, he continued to work in his grandfather’s shop, using metal blades to fashion small hunting knives, something he continued to do into adulthood. A longtime employee of Florida Power & Light Company, McCullough started out working in a refinishing shop.

“I love working with my hands,” he said. “I have just always been tinkering.”

He and his wife, Brenda, who met in school when they were 13, attended Fort Pierce Central High School, graduating in the 1980s. When he and Brenda married, he put a workshop behind the house so he could still create things and kept making knives for friends and family.

“I got better at what I was doing,” he said. “It spread by word of mouth. Someone would contact me to make a knife for them. Brenda is the one who suggested that I do a Facebook page, McCullough Knives. The demand was just intensive. We have a cabin up near Blue Ridge, Ga., and I saw a small knife shop there. I went in and talked to the guy. He told me he does consignments, so I made a few knives to send to him. They sold right away. This business is getting bigger than I anticipated.”

There are knives sold off the shelves and out of cases in small feed stores and at national retailer stores, and then there are McCullough knives – handcrafted carbon steel blades with decorative and elaborate handles – works of art.

“I still get amazed when I create these things,” he said. “It thrills me when someone else says, ‘Wow!’ ”

He starts with a slab of carbon steel and works to shape it; then there is the heat treating process in the forge before the metal is hammered on the anvil. Some of his tools are what blacksmiths used years ago to form objects from metal. Lastly, he chooses a material for the handle, often a piece of deer antler or a nice piece of beautifully grained wood. Always on the lookout for good handle material, McCullough frequents flea markets, garage sales and thrift stores.

Chef knives, Bowie knives, hunting knives of various sizes and daggers, he creates them all. He does some custom orders. His favorite, he said, is a more rustic-looking knife with a blade that is still colored from the forge and antler for the handle.

“I have a thing for the frontier look,” he said, “the cowboy look. So I use a lot of antler and a lot of wood. They have a more rustic look. Up in Georgia, there’s a market for that type of knife, so I make a lot of them.”

Selling them over the internet, making them as gifts or selling them to friends, McCullough stays busy working in his little shop. Noting that he was in his shop every once in awhile not too long ago, he said he is getting a lot of requests and spends most of every weekend fashioning his flashy blades. The biggest seller, he said, is the basic hunting knife, known in the trade as an EDC (every day carry) with a 4- to 5-inch blade. He does make larger knives through custom orders. These “choppers” as he calls them are for people who like to go camping. A little smaller than a machete, they are useful for chopping branches for wood and other camping duties.

“People have been using knives as tools since the beginning of time, whether it be of obsidian or sharpened flint. The materials might have changed, but the knives are still the same,” he said.

He works with high carbon steel, which is the best for sharpening, he said, but it will rust. In the box with each knife, wrapped in paper separately from its leather sheath, he includes a slip of paper with the date the knife was created, the hardness of the steel and the type of handle. He includes instructions on caring for the knife and its USA-made leather sheath, reminding the buyer to keep the blade lightly oiled or waxed to prevent surface rust. The leather, he said, will attract water, even from the air, so it is best not to store the blade in the sheath while it is put away awaiting use.

McCullough had a very close relationship with his father.

“He was born on Aug. 27 and died on Aug. 27,” he said. “So when I was looking for a maker’s mark for my knives, I went with the astrological symbol for Virgo. A lot of people look at it and think it is an M for McCullough, but it’s Virgo for my dad.”

In fact, after his father died, McCullough found among his father’s keepsakes, three of those beautifully crafted letter openers he made so long ago in his grandfather’s workshop.

Who inspires me: “My father died in 2011 of leukemia. I loved my father. He was always the voice of reason. He supported each of his children, no matter what they were doing.”

Something that most people don’t know about me: “They don’t know that I have been making hand-crafted knives since I was a young teenager.”