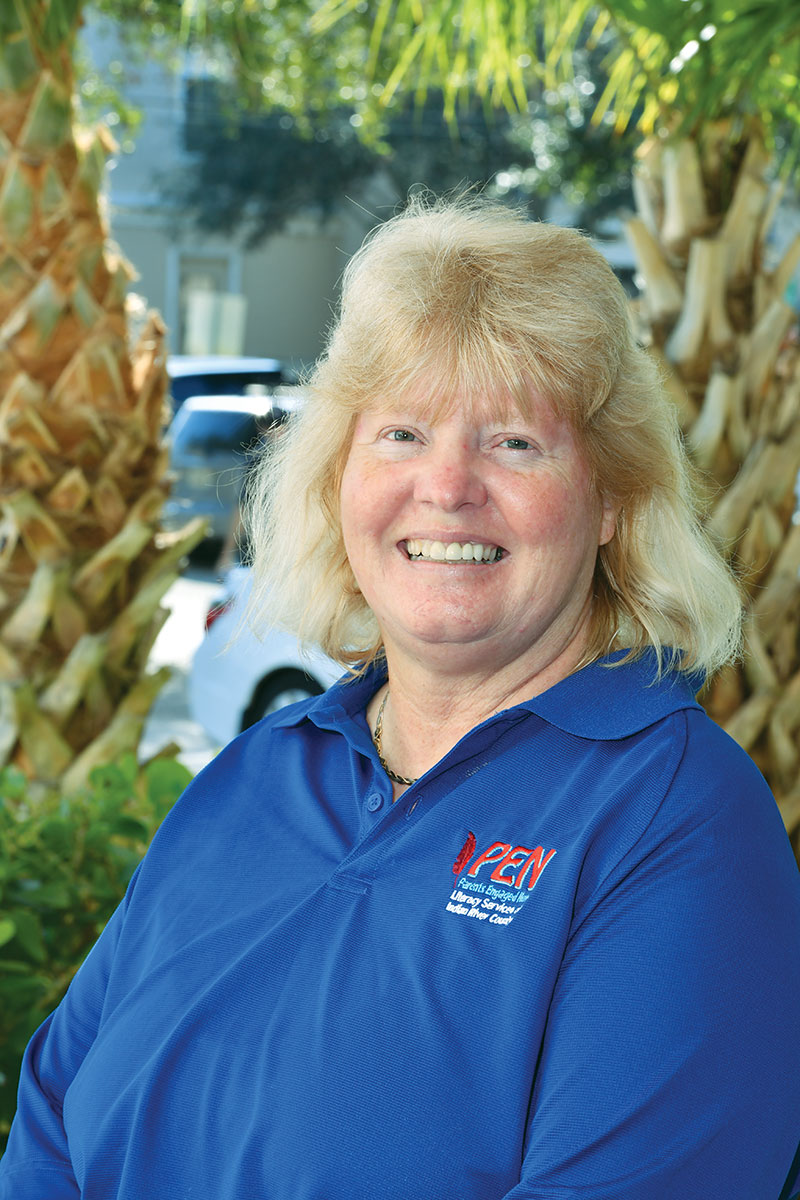 Mary Silva has served as executive director of Literacy Services of Indian River County for more than a decade. ED DRONDOSKI PHOTO

Mary Silva, executive director of Literacy Services of Indian River County, read Leo Tolstoy’s War and Peace when she was in high school and she later became a lawyer, even though she had been dismissed as borderline mentally retarded years earlier.

Silva’s birth parents were illiterate; she never saw a book until she was 5 and a new couple was about to enter her life.

“It was probably just before I was adopted,” she said. “I saw a kid who had a book in his hand and I didn’t know what that was. I went up to him and said, ‘What’s that?’ He said it’s a math book and I said, ‘What is math?’ The caretaker, or whatever they called them back then, grabbed me by the shoulder and pushed me into the kitchen and said, ‘This is where you belong and don’t ever do that again.’ I have never forgotten that.”

Silva said someone told her adoptive parents she’d be lucky to find work as a waitress someday.

The couple didn’t believe that. They asked Silva what she wanted to be when she grew up.

“I said, ‘Lawyer.’ I could barely say the word, but I knew instinctively that I wanted to help people. I must have known lawyers are supposed to do good things.”

Silva’s parents made it their mission to teach their little girl how to read.

“My parents were literate and engaged,” she said. “It was a struggle, but my mom was persistent.”

Once, at a park while other children were playing, Silva’s mom was trying to drill her reluctant learner in words that began with the letter w. Silva remembers her mother phrasing her questions to include words beginning with that letter, which helped her catch on. When Silva named five words correctly, she got to play with the other kids.

“By fifth or sixth grade, I was definitely reading,” she said. “Always, I was one of those nerdy book readers. Back then, I loved reading biographies and about people’s struggles, historical novels.”

She was a good enough reader by the fifth grade to help a boy who was struggling with the printed word.

“I thought he was a heck of a lot smarter than me, but he couldn’t read,” she said. “I asked him why his parents weren’t helping him,and he said, in a very matter of fact way, ‘Oh, they can’t read.’ ”

Silva’s parents, now deceased, made sure she had a library card and she was a frequent visitor to Indian River County’s public library when it was on 20th Street.

“I pretty much lived in the library,” said Silva, whose office is in the newer library building on 21st Street in downtown Vero Beach.

By the time she was attending Vero Beach High School, she was reading noted Russian classics, not only War and Peace but also The Brothers Karamazov by Fyodor Dostoyevsky.

After graduating in 1980, she went to the University of Florida, where she earned a bachelor’s degree in English in 1985 and a law degree in 1988. She practiced labor and employment law for about 15 years, working for the state and then in the private sector. Her first firm represented employees and the next represented employers. She became executive director of the literacy services program in 2005.

The nonprofit agency, founded in 1971, matches volunteer tutors with adults — 300 last year — who want to learn to read. It receives no government funding, so it’s not bound by regulations regarding testing or teaching styles.

Adults who can’t read are so embarrassed anyway that requiring them to take a test upon enrollment “would make them walk out the door,” Silva said.

“That’s one of several reasons why we don’t seek or accept government funding,” she said. “We focus on what the student needs rather than what the government says they need to learn.”

Some students just ask for help in applying for a driver’s license. Others want to learn how to read well enough to fill out a job application. For others, the goal is college or job advancement.

“We’re here to teach them that they can learn, notwithstanding any baggage they bring to the table, and they can be successful,” she said. “If we do that, we know our program is successful, because they then become proactive in their personal life. They’ll actually apply for a job, seek a promotion or talk to their child’s teacher.”

The tutors are not required to have a teaching background, though they do need to be patient and to understand that adults need repetition in order to retain what they are learning. They take a half-day of training when they sign on and then can attend regular in-service sessions.

“What we say is that as long as you have a heart, you can help a person, because our materials can literally tell you what to say, word for word,” Silva said.

Silva’s office provides an assortment of instructional materials and if one workbook doesn’t seem to be helpful, the tutors and students are free to try others. Tutors can use newspapers, magazines, word games, catalogs, maps and other tools to help their students. When one student, a 22-year-old Creole speaker from Haiti, puzzles over an English word, her tutor often hands her an iPhone and suggests she look it up on Google.

Impact 100, an all-female philanthropic group in Indian River County, awarded the agency a two-year, $100,000 grant to conduct a series of seven-week workshops for parents who want to help their child learn to read. The program is called PEN, meaning Parents Engaged Now, “for the love of their child.”

Silva said a common misconception is that literacy begins at birth.

“That is so wrong,” she said. “It begins with parents who are literate and engaged. Parents in the program learn that they are the child’s first and most important teacher. We talk about the importance of self-esteem. We talk about behavioral goals, discipline, learning styles, what’s expected of their child.”

And they learn “to give your child dreams, like, where do you want to go to college, as opposed to, well, you’ll finish the 10th grade.”

In other words, they learn to emulate parents like the ones who adopted Silva when she was 5 years old.

Community leader Alma Lee Loy calls Silva one of the hardest working people she has ever known, but Silva disagreed.

“I think a lot of people say that about me, but I think of myself as the laziest person. When I work, I work. When I stop, I stop. I don’t stop a lot, but then I do nothing. I pretty much either work or do nothing.”

Age: Middle age
Lives in: Vero Beach
Occupation: Attorney; executive director, Literacy Services of Indian River County
Education: Bachelor’s degree in English, 1985; law degree, 1988, both from University of Florida
Hobby: Tennis
Something most people don’t know about me:  “I played tennis and went to law school at Oxford (U.K.) for one summer.”