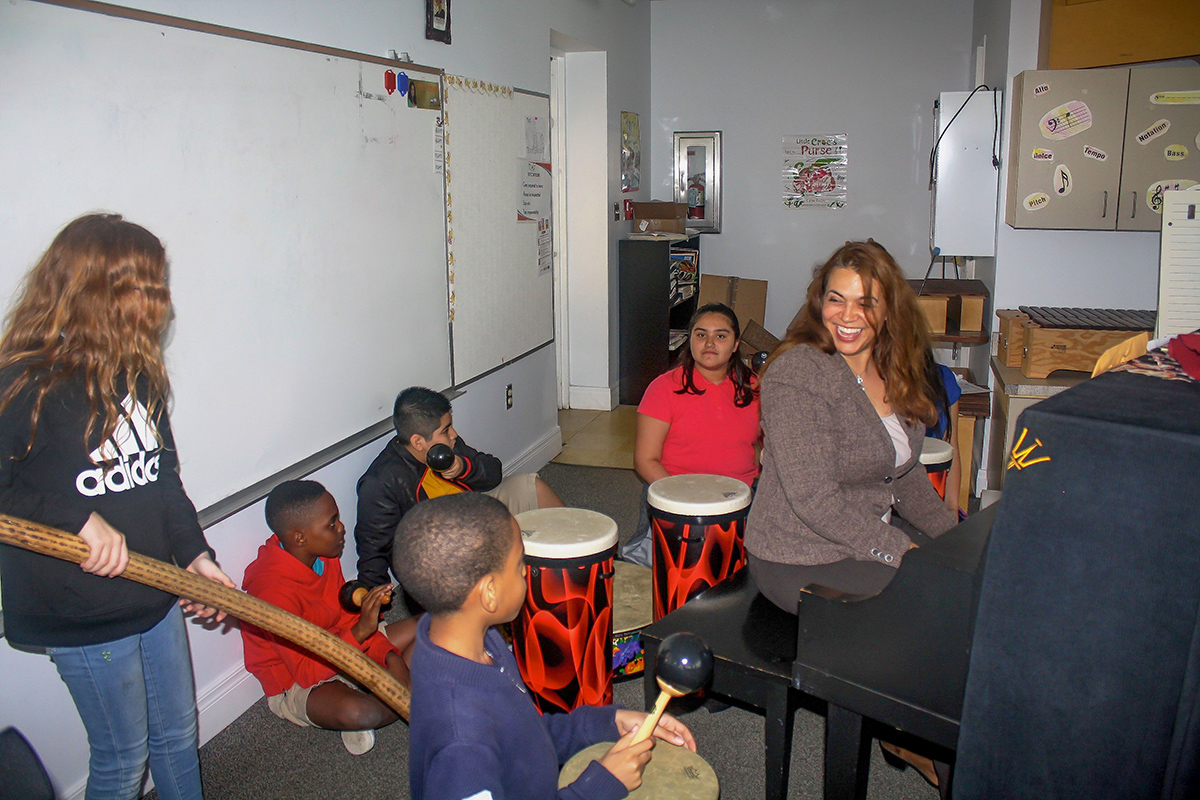 When Samantha LaCroix’s mother was studying piano in London, she met her future husband in Austria on holiday. “He wrote love letters every day until she returned to Vienna,” says LaCroix. Their love story set the tone for LaCroix’s element of romance.

LaCroix was born Samantha Andrea Polczer in Vienna, studying with the Royal Academy of Ballet at age 5. She was an only child. “My parents asked if I wanted a sister or a horse. I chose a horse,” she says. By coincidence, the horse was also named Samantha, an unusual name in Austria. “No one knew how to pronounce it, and here were two Samanthas together,” she adds.

One of LaCroix’s favorite childhood memories is being her mother’s unofficial “warm-up act” before concert piano performances, entertaining the stage crew and family. “I got to play in all the great halls,” she says, “never formally taught, learning through osmosis.” LaCroix became a piano teacher herself at 15 when her mother “threw students my way,” she says. “I didn’t charge them as much.”

When the family moved to Toronto, Canada, LaCroix attended the School for the Performing Arts. “Austria had given me classical training, but now I was exposed to jazz and Broadway,” LaCroix says. Graduating early, she attended Queens University for a year before transferring to Texas Christian University. “It’s the home of the Van Cliburn International Piano Competition, sort of the Olympics for pianists held every four years,” she says. “I studied with the winner of the 1985 competition, José Feghali.”

LaCroix’s goal was to become a great pianist and carry on her mother’s legacy. She worked hard to obtain both undergraduate and graduate degrees in piano, anticipating a life spent sitting on the piano bench, entertaining audiences.

And then she discovered opera.

“I had this great big voice, and one of the professors encouraged me,” LaCroix says. “I fell in love with opera, One of my piano teachers talked about ‘taming the beast with 88 keys,’ but with opera, I got to look at the audience, project myself. It was a collaborative effort with the other singers and musicians.”

While LaCroix worked for the Van Cliburn Foundation, helping run competitions and acting as a liaison with competitors, opera became her passion. She gave private recitals to “get my chops wet,” performed in school showcases and participated in opera nights around Fort Worth.

She also married Armand LaCroix, another TCU student. They decided that, given their schedules, they could either wait for two years or marry within two weeks. “We rented a chapel for fifty dollars; I got my dress at Burlington Coat Factory; our parents came along when we ‘eloped,’” she says.

With the money they saved on a big wedding, the couple bought a home in Connecticut, closer to family and New York. Crammed into their 900-square-foot house, her husband ran eBay and computer repair/recycle businesses from their new son’s nursery. LaCroix taught piano in the living room. She also found an opera teacher at Yale, performing whenever she could. As a stay-at-home mother who taught piano to 20 students, she also studied diction so that she could sing and speak French. A few years later, their new daughter meant a bigger house and with it, a larger music studio.

In 2006, the family moved to Tradition. LaCroix worked as the choreographer for St. Edwards School in Vero Beach, then as the choir teacher. From there, she was the music teacher at Bayshore Elementary in Port St. Lucie and was voted Outstanding First Year Teacher at the county and district levels. At St. Lucie West Centennial High School, she built a vibrant theater program that debuted her own musical, For What It’s Worth.

LaCroix branched out in 2018, creating her own company. “I wanted to do too much, too soon,” she says. When a dream job at the new Creative Arts Academy of St. Lucie in Fort Pierce opened, she jumped at the opportunity. “Teaching proper techniques, composition, body percussion and creative movement develops a strong work ethic and self-discipline in my students, which in turn leads to self-confidence and feelings of self-worth. I hope to instill life-long understanding and appreciation for all the performing arts with the hopes that my students’ lives will be enhanced, as my own life was.”

For much of her life, LaCroix has taught piano, voice and drama, but she never lost the desire to perform. Along with family, teaching full-time, and her now-part-time company, LaCroix has acted in infomercials and in improvisational and dinner theaters. She has also sung with Music Box of Merrill Lynch and at other venues on the Treasure Coast.

Cast as a recurring character in a television series currently being pitched, she also appeared in The Awakening, a feature-length film which premiered in West Palm Beach in March. “I’ve taught and nurtured others a long time,” says LaCroix. “It’s time to ‘do me,’ too.”

Age: 46
Lives in: Port St. Lucie
Occupation: Elementary music teacher at Creative Arts Academy of St. Lucie (CAST) in Fort Pierce
Family: Husband, Armand; son, Armand Jake, 18; daughter, Madeleine, 16
Education: Bachelor’s and master’s degrees in piano from Texas Christian University, plus independent studies in theater, opera and dance
Hobbies: Yoga, volunteering with horses, “anything with music”
Who inspires me: “My mom is a beautiful, strong person who introduced me to the arts and was a concert pianist in her own right, performing all over Europe.”
Something most people don’t know about me: “I speak German and am still an Austrian citizen, because Austria doesn’t allow dual citizenship. I have a green card.”