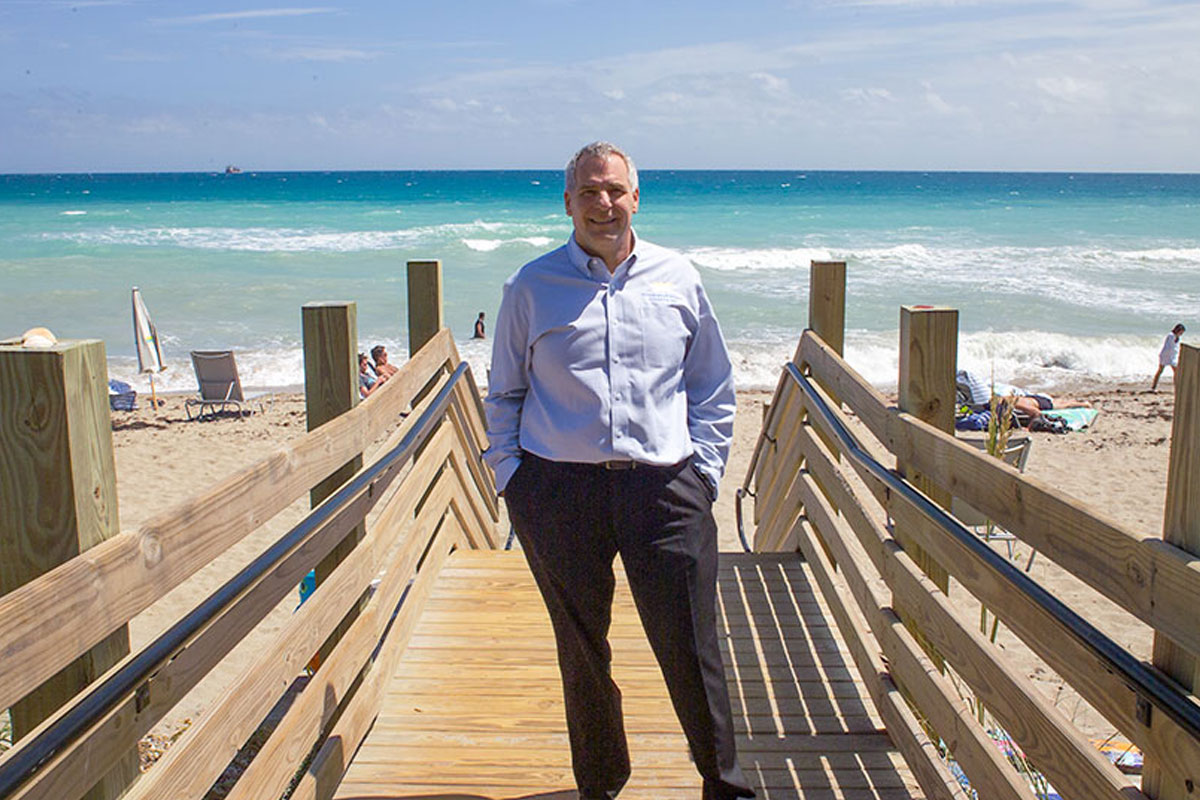 After years in the ever-hectic world of college football, Tom Deahn, director of event management at the Hutchinson Shores Resort and Spa, switched to a less stressful position in the hospitality industry. ANTHONY INSWASTY PHOTO

Tom Deahn, director of event management at the Hutchinson Shores Resort and Spa, comes from humble beginnings in the small town of Arcade, N.Y. — just outside of Buffalo, where he was his father’s main source of help on their dairy farm.

“I began doing man’s work when I was just a 7-year-old boy,” he said. “I was driving tractors, taking care of cows and so on…”

When not tending to the herd, he and his family were very involved in athletic events and enjoyed watching sports. Deahn’s father played basketball, baseball and semipro football for a short time in his youth. He even tried out in the 1960s with the Buffalo Bills when it was an American Football League franchise.

“I think with that background, sports became my life,” Deahn said.

One interesting tidbit Deahn shared was about his father’s participation in rodeo events.

“He was mentored by Slim Pickens,” he reminisced. Pickens was a rodeo performer and actor, best known for his role in Blazing Saddles.

“My mother was also involved in sports as well. She was a cheerleader and played basketball.”

Quite the athlete, Deahn showed horses, played Little League baseball and participated in the Attica Rodeo, riding bulls in his senior year of high school. Because his hometown did not have a youth football program, Deahn didn’t play until his freshman year in high school.

“I knew I wanted to continue playing football and was fortunate enough to have the opportunity to play at Heidelberg College in Tiffin, Ohio,” Deahn said.

After his freshman year, the coaching staff changed and this would impact Deahn’s life forever. The new Heidelberg position coach, Greg Quick, became a mentor and older brother figure for Deahn.

“During my sophomore year, my father’s passing made me even more determined to achieve the goals I had,” he said.

Deahn remembers Coach Quick and the entire team being extremely supportive at the time. This turn of events changed his outlook — he felt that his father was always watching and guiding him. “I never wanted to let him down,” he said, proudly.

After graduating, Deahn worked at a bank outside of Washington, D.C., in Northern Virginia.

“It was not my passion and it was too boring for me. I did some soul searching and figured that if I was most likely going to work for the next 40 years, I wanted it to be doing something I loved.”

Deahn decided he wanted to coach high school football and through reading a Sports Illustrated article, Deahn reconnected with his mentor, Coach Quick.

“Coach gave me some advice, and the first piece was to be ready for a pay-cut,” he said jokingly.

It just so happened that Deahn knew a Washington Redskins player who had a summer camp at the Catholic University of America.

“He let me work the camp to get my foot in the door and meet local coaches,” Deahn said.

At the end of the first week of camp, Deahn was asked by Rick Novak, head coach at Catholic University of America, to join his staff for the upcoming season. Deahn accepted and figured if practices were at 6 a.m., he could still work at the bank. However, his manager had issues with this and Deahn left banking to navigate the world of college football.

“My foot was officially out the door and on the field,” he said. “I coached football at C.U., bartended and was a personal trainer at a gym for that first year to make it all work before I was hired on full time.”

Deahn moved on to St. Norbert College and after eight years of being a position coach and defensive coordinator there, moved up the ranks. He was offered a position as director of football operations for the University of Maryland. He oversaw budgets, coordinated logistics involved with recruiting and served as a liaison between coaches and other staff members.

“I spent seven years at Maryland and one of my best memories was playing in the 2002 Chick-fil-A Peach Bowl against Tennessee,” he said. “Nobody thought we could win the game because Tennessee was loaded. We ended up winning the game 30-3. The team arrived back at the hotel to over 5,000 people hanging over railings, yelling and singing our fight song.”
He said the memory alone still gives him goosebumps.

“There were so many great and interesting memories that my plan is to write a book when I retire,” Deahn said. “The best ones are often related to the bonds with the players.”

After Maryland, Deahn spent time in similar positions at Temple and the University of Miami. But a few years ago, Deahn made another change and steered toward a less stressful and, comparatively, more laid-back career choice, hospitality management.

He knew that his experience setting up travel accommodations, appointments and meals for the teams would benefit him in this field.

When asked why he left football, Deahn said “When your whole family’s livelihood depends on 18 to 22-year-old kids’ decisions, you realize, it’s insanity.”

Deahn knew he “wanted to remain in the beauty of Florida.” He joined a group of luxury hotels and resorts in South Florida and started out assisting with events at Delray Sands in Boynton Beach.

“I was able to prove myself and accelerate quickly,” he said. “Within the course of the year, I helped bring 30-50 percent more business than the property had experienced before.”

With that success, he was hired as the director of event management at the Hutchinson Shores Resort and Spa in Jensen Beach, part of Ocean Properties Hotels and Resorts. The resort was built in the old Holiday Inn building, which was destroyed by hurricanes 12 years ago and left abandoned since. It has been a huge economic boost for the area and Deahn is proud to be a part of it.

Deahn still finds his work challenging, but with a much less demanding schedule. At most, he is working 50 hour weeks versus 80-90 hour weeks in football. He is also still in an operations role, which he very much enjoyed in his football career.

“No matter how crummy I may feel on any given day, I look out on the water in Jensen and take a sigh of relief,” he said. “I remind myself, there is no need to be stressed.”

Having moved from Broward County just a year ago, Deahn is enjoying the Treasure Coast and quickly becoming part of the local community. He and his wife attend the St. Lucie and Martin counties chamber of commerce events to represent the hotel and have a lot of fun meeting the locals.

Deahn continues to keep in touch with former players and misses the comradery, but said he loves the change of pace here. He also plans to become involved with some local youth sports groups in the area.

“The Treasure Coast has felt a lot like my hometown,” he said. “It is much quieter and feels more like the country to me.”

Deahn was involved with the Equine Rescue and Adoption Foundation of Palm City for about six months when he first moved to the area. Now that he is more settled, he hopes to go back and provide his horse-handling skills and time.

“The most important part of all, is that I have time for my wife and family, which wasn’t the case before. That is truly a blessing,” Deahn said.

Occupation: Director of event management at the Hutchinson Shores Resort and Spa

Education: Bachelor of Arts degree in business administration and management from Heidelberg College and master’s degree in administrative science from University of Wisconsin - Green Bay

Who/what inspires me: “My wife, Patty, my dad and Coach Greg Quick.”

Something most people don’t know about me: “Won the 2009 National Director of Football Operations of the Year award — votes taken by college head football coaches and my peers.”