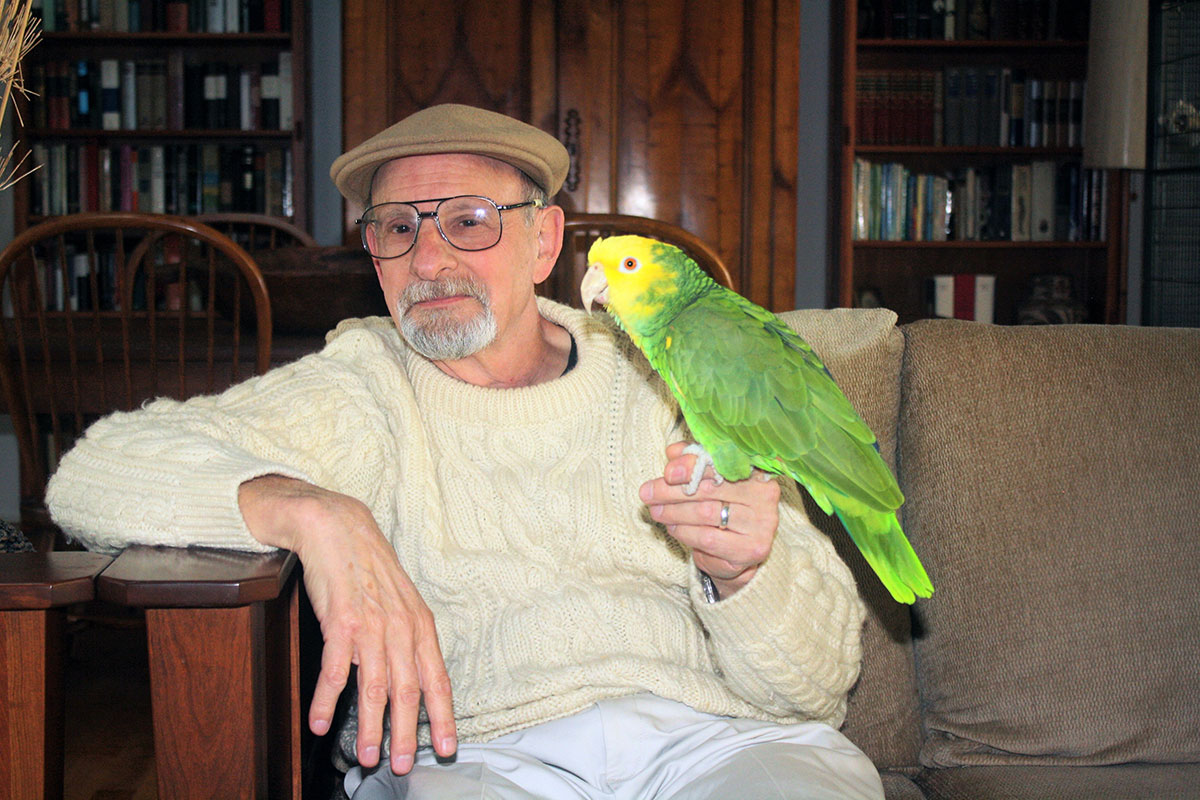 Howard Brown, known professionally as H.G. Brown, wrote his first one-act play at Proviso East High School in Illinois. His drama teacher liked The Plateau so much, the school produced it. One of the performers, Mark Lamos, went on to be a Tony Award nominee for excellence on Broadway.

At Indiana University, Brown founded an off-campus theater group, the VestPocket Players, with future star and Academy-Award winner Kevin Kline, which led to a scholarship for Stanford University’s master’s program. Clearly, Brown was a man who caught the drama bug harder than most.

As so often happens, however, theater seemed destined for “hobby” status. In California, Brown got married; the couple had two children. When the marriage didn’t work out, he came back east to work at a printing company his father owned. But he never stopped writing.

Brown’s play The Gargoyle won the Norman Corwin Prize and was later adapted for Corwin’s television series as Crown of Rags, starring David McCallum. Years later, when Brown saw McCallum after a Broadway show, the actor quoted one of his lines, remembering the story fondly. McCallum’s IMDb (Internet Movie Database) listing online has the story information incorrectly listed as Crown of Rages by Howard “Browne.”

In 1987, a story ran in the Baltimore Sun about a bloodied yacht found abandoned on the Chesapeake Bay with nobody on board. Brown wrote a play based on what might have happened, not really expecting it to go anywhere. “And then I got a call — someone wanted to produce Daysailer.”

Over the years, the play was rewritten, reworked and retitled. He gathered actors together for readings, getting feedback on what worked and what didn’t. Over the decades, what started out as a four-act play became two acts titled The Lady Swims Today. “Three desperate men at a marina plan a heist at sea, but the women in their lives create challenges,” says Brown. “It’s a drama in the tradition of Key Largo — film noir shadows and flashes of comedy,”

Live theater often results in different interpretations of plays. Productions of The Lady Swims Today in Texas, New York, and Florida productions have each been unique. Robert Funaro of The Sopranos made an excellent bad guy on stage in New York, for instance, and the Texas cast sounded more like they were from Galveston than “Bal’mer.”

The Lady Swims Today has also been produced several times in Florida with Brown directing. Scheduled as the first play in the Pineapple Playhouse’s 2017-2018 season in Fort Pierce, Hurricane Irma sank its chances. With no electricity, the show was canceled and rescheduled for 2019.

Brown’s second wife passed away in 2008. Some years later he reconnected with a former classmate online. He and Kathy married in 2011, making it a point to travel to see his plays performed.

The Browns recently traveled to New York with friends to view an off-off-Broadway premier performance of The Bare Truth, which Kathy calls Brown’s “Florida play.” The inspiration for the plot came while having dinner with friends whose daughter was moving near them. “I asked if she’d have a key to their place, and they said no.”

From that small seed grew the plot of The Bare Truth. An older couple moves to Florida to be near their middle-aged kids but grow weary of their constant, unannounced visits. When changing the locks on the door doesn’t solve the problem, neighbors suggest they tell the kids they’ve become nudists.

“There’s no nudity in the comedy, but the eight characters talk about it,” Brown says. “It’s kind of an ‘empty nest’ in reverse situation. It also addresses the fact that older people are capable. They want respect. They value privacy.” Brown hopes to bring the play to Florida audiences. “It was designed with them in mind.”

Other H.G. Brown plays are available online. Adam’s Ale was inspired by what he considers to be poorly orchestrated debates today. Blending quotes with original material, Abraham Lincoln and Stephen Douglas face off, followed by Frederick Douglass. Other titles are JJ, She Loves St. Pete, and Poetry Tonight.

Brown says he always has a few ideas “cooking,” such as chance observations of a young man with palsy he knew in Chicago and his father’s experience as a B-17 pilot at Needles Army Airfield near Death Valley.

Not only does Brown love writing plays, he enjoys directing them as well, most recently in Jupiter and Stuart. And he isn’t averse to being on stage himself. Last year, Treasure Coast audiences saw him in both Tuesdays with Morrie and The Sunshine Boys at A.C.T. Studio Theatre in Stuart. Previously, he was in Pineapple Playhouse’s One Flew Over the Cuckoo’s Nest, awarded Best Show in 2016.

Brown’s dream gig would be directing Eugene O’Neill’s Pulitzer Prize-winning Anna Christie. “There’s an ‘old feel’ to it, fishermen, a waterfront setting. I think Florida audiences would like it a lot.”

Age: 74
Lives in: Port St. Lucie
Occupation: Retired from the printing business; a professional playwright
Family: wife, Kathy; son and daughter in Seattle with seven grandchildren
Education: Bachelor of arts from Indiana University (speech and theater, as well as German history); master of fine arts from Stanford University (drama and directing)
Hobbies: Boating, theater, music, landscaping, reading.
Who inspires me: Eugene O’Neill, William Faulkner, Herman Melville. “The best beginning lines ever are ‘Call me Ishmael’ (Moby Dick) and ‘They threw me off the hay truck around noon’ (The Postman Always Rings Twice).
Something most people don’t know about me: “I’m a licensed pilot. Flying used to be a hobby until it became too expensive, and I had heart surgery.”

To listen to the audio of David McCallum’s 1972
show based on a H.G. Brown play,
go to http://nowstar.us/files/crown-of-rags.mp3